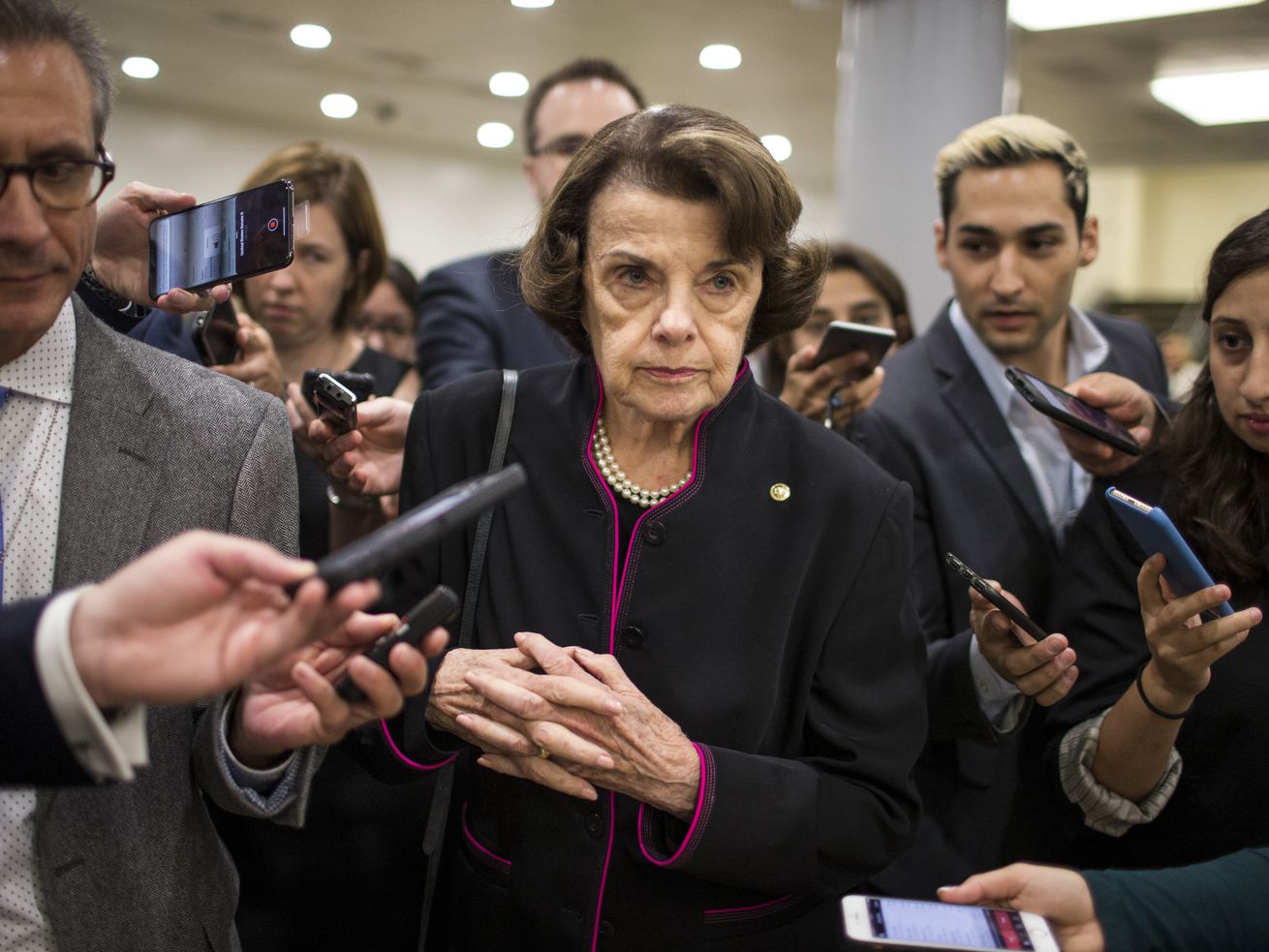 The reporter who wrote the story confirmed it.

“The circus atmosphere that has been created since my Democratic colleagues first leaked Dr. Ford’s allegations to the media two weeks ago after sitting on them for six weeks, I might add, has brought us to our worst in our politics,” Sen. Orrin Hatch (R-UT) said during Kavanaugh’s testimony. It’s a talking point that Kavanaugh used in his opening statement as well.

Then something happened that upended Republicans’ talking point: Republicans confronted Sen. Dianne Feinstein (D-CA), the top Democrat on the committee who first received Ford’s allegation in a letter confidentially in July, about the leak directly, only to find themselves confused with the timeline of what had actually happened.

Feinstein received Ford’s letter in July, but maintains she did not come forward with the claims to the Senate committee or any of her Democratic colleagues in order to protect the confidentiality requested by Ford — something Ford has thanked her for. But eventually, news of a letter was leaked to the press, first to the Intercept, then to Buzzfeed, and the content trickled out over time.

Sen. John Cornyn (R-TX) turned to Feinstein and asked directly: “Can you tell us that your staff did not leak it?”

Feinstein responded clearly: “The answer is no. The staff said they did not.”

Feinstein’s comment was confirmed by the reporter who first published the story about Ford’s letter. “Feinstein’s staff did not leak the letter to The Intercept,” Ryan Grim, the bureau chief at the Intercept, and author of the original story, tweeted.

What ensued was some confusion — on Cornyn’s part, who had seemingly forgotten the timeline Ford presented in her testimony. Here is the exchange:

Feinstein: It’s my understanding that her story was leaked before the letter became public. She testified that she had spoken to her friends about it and it’s most likely that that’s how the story leaked and that she had been asked by press. But it did not leak from us, I assure you of that.

Cornyn: Mr. Chairman, I’m a little confused. I thought only the member of the House and Senator Feinstein and her lawyers had the letter. So her friends she might have talked to about it couldn’t leak the letter if they just had a verbal conversation unless she gave them a copy of the letter.

Feinstein: Senator, I don’t think the letter was ever leaked.

Cornyn: Well, how did the press know to contact her about her complaint?

Unless either the leaker goes public or the Intercept divulges its source, we will never know who leaked news of the letter to the Intercept. But Feinstein is right: News of a letter leaked prior to the contents of the letter itself — which eventually trickled out. The Intercept reported that Feinstein’s Democratic colleagues requested to see the letter in September, after she had told them she received one, but her office refused.

In September, Feinstein eventually referred the letter to the FBI, which told her the background check was closed. They added the letter to Kavanaugh’s file as a supplemental document, that senators could access.

Republicans, who for weeks have been saying the timing of these allegations were suspect, just hit a major snag with their talking point that this entire allegation was part of an orchestrated smear campaign. Republicans can make the point that they wanted Feinstein to break Ford’s wishes, but not that Feinstein leaked this letter to the press.

Here is what Feinstein had to say about it:

I did not hide Dr. Ford’s allegations. I did not leak her story. She asked me to hold it confidential and I kept it confidential, as she asked. She apparently was stalked by the press, felt that what happened, she was forced to come forward and her greatest fear was realized.

She’s been harassed, she’s had death threats, and she’s had to flee her home. In addition, the investigation that the Republican majority is heralding is really nothing that I know about other than a partisan practice.

Normally all the witnesses would be interviewed. However, that’s not happened. While the majority has reached out to several people, they did not notify me or my staff that they were doing this and so to argue that we would not participate but not tell us what they were up to is somewhat disingenuous. I was given some information by a woman who was very much afraid, who asked that it be held confidential, and I held it confidential until she decided that she would come forward.