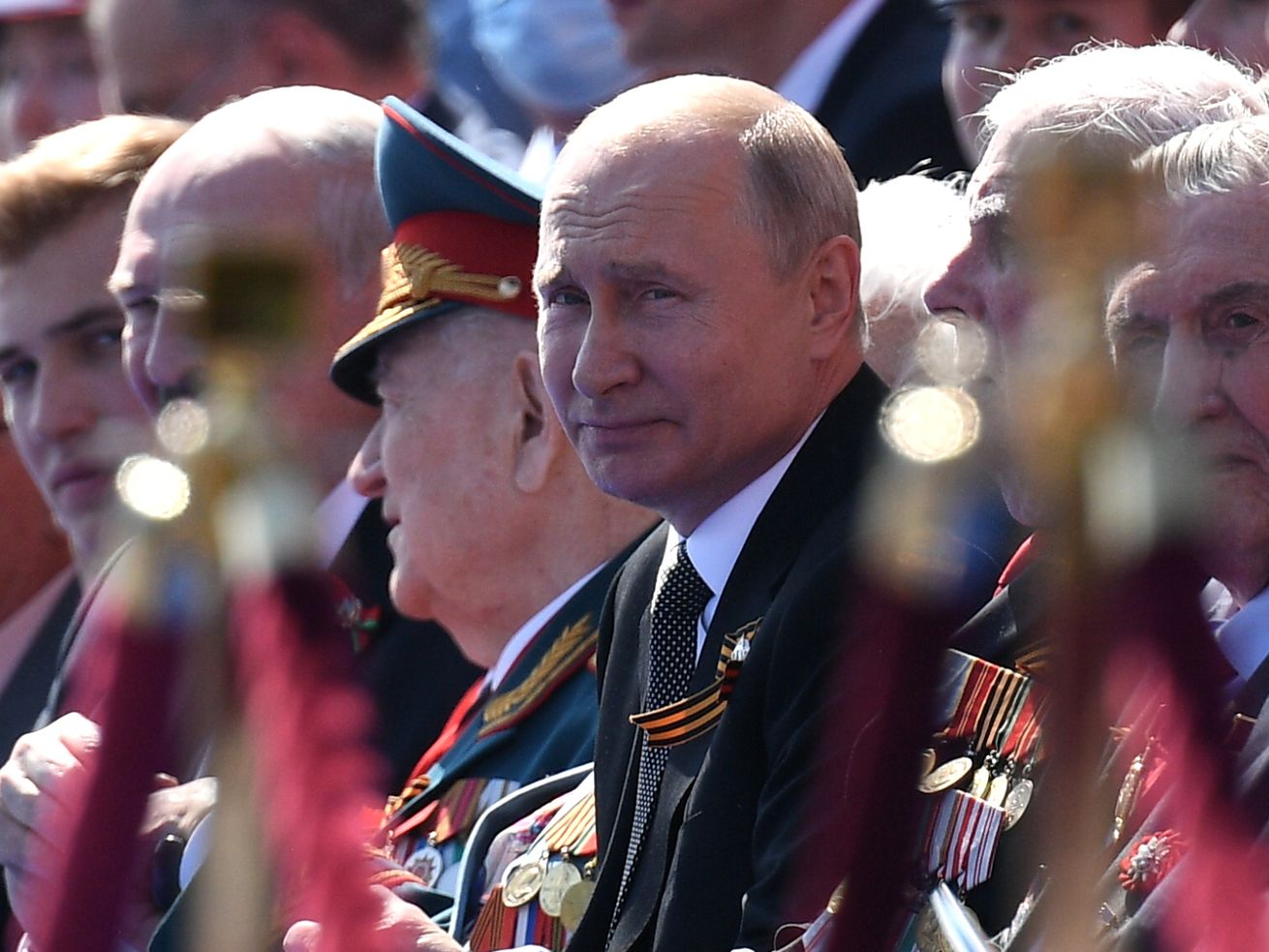 The Russian leader got his popular mandate, but he might not be as powerful as a referendum makes him sound.

Russian President Vladimir Putin just got what he’s wanted from a recent vote: the veneer of a popular mandate on a plan that allows him to stay in power far beyond his current term limit — and could essentially make him president for life.

On July 1, Russia tallied the results of a week-long national vote on a slew of constitutional reforms, including a constitutional amendment that allows Putin to nix term limits and remain president until 2036. Such an outcome was expected, and largely predetermined, given Russia’s long track record of electoral fraud. This latest vote also saw some, well, irregularities.

Putin, who’s been in power in Russia one way or another since 1999, was scheduled to leave office in 2024, though most observers figured he’d likely find a way to drag that out. The Russian leader’s plans became clearer this March, when, in the early stages of the coronavirus crisis, Russia’s parliament unrolled a whole bunch of proposed constitutional changes. They included a tweak that would reset presidential term limits, which could effectively make Putin Russia’s president for the rest of his life, or at least most of it (he’ll be 83 in 2036).

At the time, Putin proposed holding a national vote in April to get popular backing for these changes, but the Kremlin postponed the vote because of the coronavirus. They ultimately held it this week.

But here’s the fun part: Putin didn’t actually need the Russian people to back these changes in the vote; he’d already gotten the necessary approval from Parliament, regional governments, and the courts.

In fact, not only had the constitutional amendments already been enacted, the newly amended constitution had actually been printed and sent to bookstores for sale — before the vote even happened.

That doesn’t mean the vote didn’t matter, though. It did, just for a different reason. Putin may not have needed peoples’ votes, but he wanted them — lots of them — to try to legitimize the power grab, and to help signal, especially to Russia’s powerful elite, that Putin’s still the guy.

And, as was expected, he got the votes he wanted: According to Russia’s Central Election Commission, more than 77 percent of voters supported the changes to the Russian constitution. Of course, Putin was always going to win, one way or another, thanks to all the electoral shenanigans he’d put in place (more on that in a bit).

So Putin got approval for lifetime job security, at least on paper.

But the Russian president is in a bit more precarious position than the vote tallies might suggest. The country’s economy remains stagnant, and that was true before the pandemic hit. It might be partly why Putin wanted this vote now.

“It’s a very ironic situation,” Timothy Frye, a professor of post-Soviet foreign policy at Columbia University, told me. The constitutional amendments are a “grab for power that’s being done in some ways from a position of weakness rather than strength.”

How to win a mostly fake election, according to Russia

Voting began June 25, giving voters about a week to cast their ballots in person. Russia lifted all of its coronavirus restrictions the day before voting began, marked with a nice, big parade.

Voting stations were set up all over, including in places like the trunks of cars and also the trunks of actual trees. Online voting was also rolled out, though at least one Russian journalist reported that the system allowed him to vote twice, once in person and once online, according to the Washington Post.

Observers have noted lots of other irregularities in the process, most notably widespread reports of employers pressuring their employees to back the amendments. Experts told me this commonly happens in Russian elections, especially in the public sector, and reports suggest the campaign was deployed quite heavily during this upcoming vote.

Even more craftily, though, the amendment to change Putin’s term limit also appeared on the ballot with many other amendments, some of which were pretty popular. They included a guarantee on pensions, an amendment that defined marriage as between a man and a woman, and another that affirmed Russians’ belief in God. There were nearly 200 in total, according to the Wall Street Journal.

And these were all packaged together in a single up-or-down vote — which meant if you wanted a pension guarantee, or if you wanted to make it super clear you and your compatriots really do believe in God, then oh, by the way, that also meant you just voted to approve a lifetime Putin presidency. The Kremlin also campaigned on these more popular issues, making them the centerpiece of the vote and downplaying all that term limit stuff.

“They were distractions, because obviously the intention was to get a positive vote for Putin to stay on,” Sir Andrew Wood, associate fellow of the Russia and Eurasia program at Chatham House who served as Britain’s ambassador to Russia from 1995 to 2000, told me.

Given this, it’s no surprise the Russian opposition called the vote a sham.

“We’ll never recognize this result,” Alexei Navalny, one of Russia’s most prominent opposition leaders, said. The coronavirus — and the social distancing restrictions that banned mass gatherings — had also made it challenging for Putin critics to voice their displeasure or protest before the vote, somewhat quieting possible opposition.

But, again, Putin didn’t technically need nearly 78 percent of Russians to vote for the amendment. These changes were mostly a done deal. But Putin wanted to say that all these people backed this plan. That’s a big part of what this vote is about.

Putin’s victory in this “referendum” might seem at first glance to underscore Putin’s popularity — at least, Putin would like everyone to believe that. But the Russian president has faced a lot of pressure recently, and that may continue to build in the aftermath of the pandemic and a deepening economic crisis.

This May, his popularity dipped to its lowest point ever: 59 percent. And while, sure, 59 percent is still pretty impressive (Trump, for example, hasn’t ever cracked 49 percent), it’s down from about 70 percent earlier in the year. Russia’s economy also continues to struggle. Declining oil prices and Western sanctions for Russia’s international misdeeds, from Ukraine to election interference have squeezed the Russian economy. Putin’s attempt to give it a boost have also floundered; a $400 billion stimulus plan hasn’t yet delivered the promised growth. And that crisis is may deepen now that the entire world is facing a prolonged recession.

Exactly how bad the coronavirus situation is in Russia is still a bit cloudy; the country has reported more than 660,000 cases — the third-most cases in the world behind the US and Brazil — and fewer than 10,000 deaths. It’s unlikely those statistics are entirely accurate, though. But even if those counts are off by quite a bit, the toll in the near future likely won’t be as bad as it has been in some other Western countries (specifically, the US, which has more than 2.7 million confirmed cases and more than 128,000 deaths, as of July 2.)

The fallout from all of this is still wildly unclear, which may be why Putin seized the moment to push through these constitutional changes at this time of uncertainty.

The referendum was a “way for Putin to say, ‘Look, I’m still in charge here. I’m the one with the popular mandate. Everyone quiet down,’ as a way to demonstrate his power,” Ora John Reuter, an associate professor at the University of Wisconsin-Milwaukee, told me.

It was meant to send a message to the people — and especially the elites — of Russia that in such turbulent times, they need Putin’s leadership more than ever.

Putin himself basically said as much after the vote: “We are still very vulnerable in many ways, we have done our best, we need internal stability and time to strengthen the country, all its institutions,” he said in a speech Thursday.

But orchestrating a national vote to prove this doesn’t exactly inspire that much confidence, either.

“The more the Kremlin has try to get people to turn out to vote, and to engage in things like packaging together all these amendments, or not allowing rivals to run against him, the harder it is for them to make the case to the average Russian that Putin is really popular,” Frye, the Columbia professor, said.

It’s that position of weakness, not strength, that is the true undercurrent of Putin’s acts. And the referendum doesn’t tell Russia or the rest of the world all that much about his future plans.

Putin hasn’t officially announced that he’ll run again after 2024, but he almost certainly will, and the constitutional amendment removes any political jockeying or worries over a successor that might have crept up.

“In a weird way, I don’t think this actually gives us much new information about what his intentions are vis-à-vis 2024,” Reuter said. “It opens the door, legally, to him staying on — but no one ever thought that the main impediment to him staying on was that the pesky law was going to get in the way.

“So I think the question is still about the future is still kind of open,” he added. “Obviously, any of the betting odds will stay. But, you know, a lot of things can happen between now and then.”