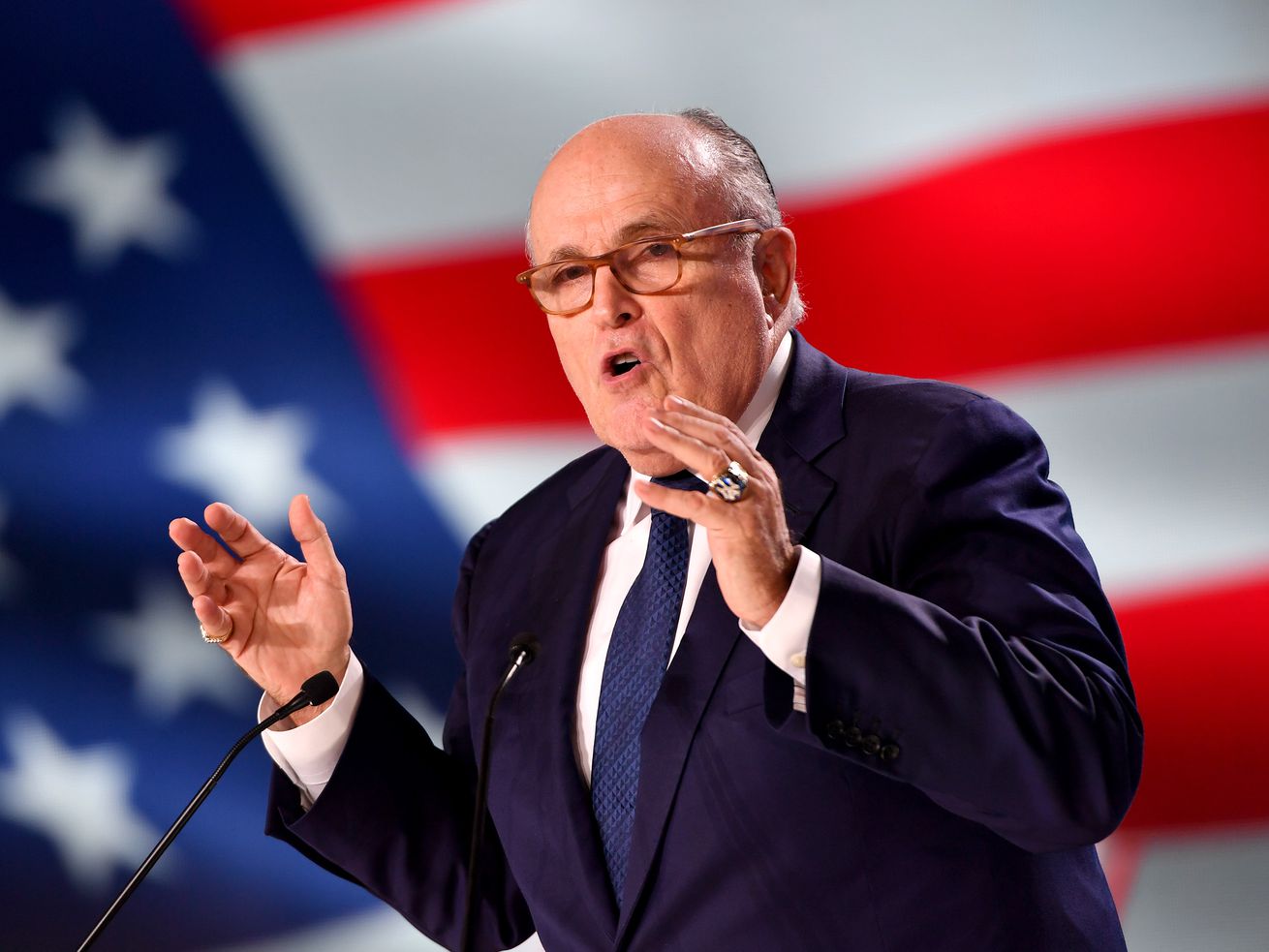 Former Mayor of New York Rudolph Giuliani speaks during the Conference In Support Of Freedom and Democracy In Iran on June 30, 2018 in Paris, | Anthony Devlin/Getty Images

Rudy Giuliani, personal lawyer to Donald Trump and a key figure in the Ukraine scandal, will no longer make a paid appearance at a Russia sponsored conference in Armenia, according to The Washington Post.

Giuliani has faced increasing scrutiny in recent weeks over his role in promoting a conspiracy theory at the heart of a whistleblower complaint that has roiled Washington and left Trump the subject of an impeachment inquiry. That conspiracy theory maintains — without any evidence — that former Vice President Joe Biden pressured Ukraine to fire its top prosecutor in order to protect his son.

Giuliani has shared this theory over the past several months, and claims to have worked to encourage Ukraine to investigate Joe Biden at the behest of Trump administration officials. And Trump himself requested Ukraine work with Giuliani on the investigation on a July phone call that is central to the whistleblower complaint that led to the impeachment inquiry.

Given the Trump administration has only recently emerged from an investigation into possible conspiracy with Russia, and given Giuliani is a central figure in a blossoming scandal, critics expressed concern about the lawyer attending the Eurasian Economic Union event in Armenia, which, in addition to being sponsored by Russia, will feature appearances by US adversaries such as Russian President Vladi­mir Putin and Iranian President Hassan Rouhani.

Further adding to concerns, Giuliani would have been the only American present at the anti-West, pro-Kremlin conference (the Eurasian Economic Union itself is a trade alliance created by Putin to counter the European Union, a partnership of US allies) and was scheduled to speak in a panel moderated by Sergey Glazyev, a loyal Putin ally who is under US sanctions as part of retribution for Russia’s invasion of Ukraine. Some were also concerned about the fact Giuliani’s pay for his appearance seemed to be coming from the Russia government.

When initially asked about the appropriateness of his appearance at the pro-Kremlin event, Giuliani had been unapologetic about his appearance and sarcastically said, “I will try to not knowingly talk to a Russian until this is all over,” according to the Washington Post.

But following public backlash, Giuliani announced Friday evening that he would no longer participate in the conference. He told the Post that he hadn’t been aware Putin would be in attendance and said he was now cancelling because, “Discretion is the better part of valor.”

While Giuliani will no longer attend the conference this year, he’s already participated in the past — although he was largely able to dodge scrutiny until now. Last year, the president’s personal lawyer also spoke in a panel moderated by Glazyev. Giuliani told the Post he had not realized Glazyev would be involved before attending last year, and that when he found out, he made it clear he would just give a speech and leave. He said he doesn’t remember if the two shared any conversations during the conference.

As high-profile as Rudy Giuliani may be, he still is a private citizen, serving as Trump’s personal lawyer. He’s been able to benefit from that status by not having to screen his media appearances or paid work. And he is able to receive the full benefits of attorney-client privilege. He is technically allowed to speak at whatever organization he wants to.

The only problem is that he has been given jobs that aren’t typically given to those outside of government. Recent reports have shed light on the fact that he’s been playing the role of an unofficial US envoy to Ukraine by reaching out to Ukraine on behalf of the president. As Vox’s Matt Yglesias wrote:

According to reporting by Greg Miller, Josh Dawsey, Paul Sonne, and Ellen Nakashima for the Washington Post, it was Giuliani who ran a “shadow Ukraine agenda.” The full scope of the agenda is still a matter of investigation, but it involves sidelining then-National Security Adviser John Bolton and other key officials to pressure the Ukrainian government into fabricating corruption charges against Joe Biden and his family.

Running sensitive diplomatic missions may sound like an odd job for an attorney not formally employed by the United States government. Adding that the attorney in question used to be mayor of New York City doesn’t really explain it.

Private citizens cannot speak on behalf of the US government — doing so is illegal. To prove that his unofficial Ukraine diplomacy was government sanctioned, Giuliani recently read personal texts he exchanged with a State Department official, Kurt Volker, to prove that he was being directed by a government authority live on Fox News. One day after Giuliani shared the texts, Volker resigned.

While Giuliani may be protected as a private citizen, officials like Volker are not. And his attempts to clarify his role seem to have only furthered concerns about the Trump administration and Ukraine. Giuliani may have dropped out of the upcoming event in Armenia, but his continued activity, should it remain of a kind with his recent actions, could very well cause further problems for the Trump administration.