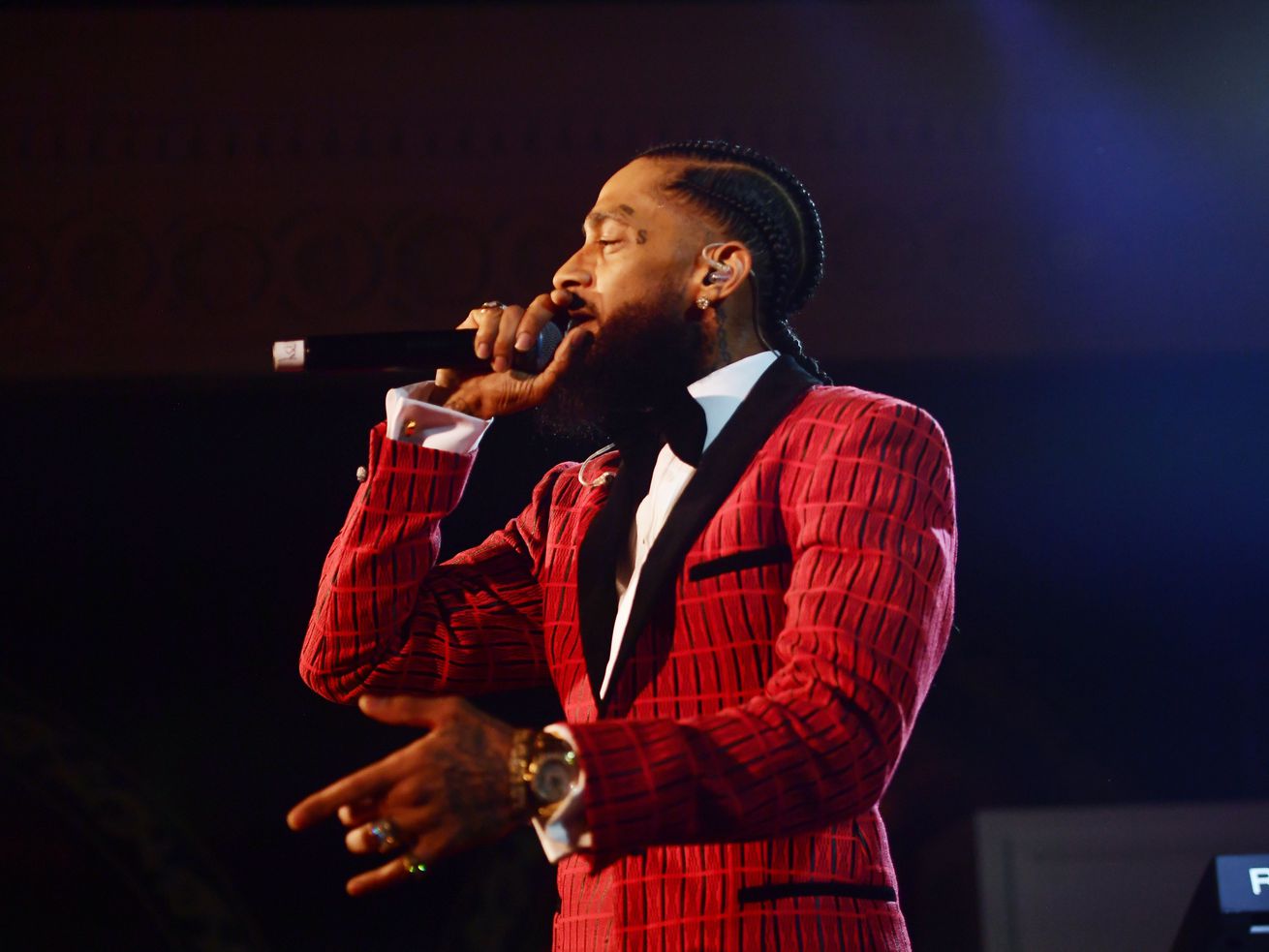 The Grammy nominee’s quiet rise from the Crips to community activist defines his legacy.

You may not have heard the name Nipsey Hussle before he was shot and killed on March 31 in Los Angeles. But news of Hussle’s death went viral and led to an online outpouring of grief and love from huge names in the music industry and beyond, from Chance the Rapper to Colin Kapernick to Ava DuVernay.

But while some of popular culture’s biggest tastemakers mourn, many casual observers ask: Who is Nipsey Hussle?

Hussle, who was 33 years old when he died, was a Grammy-nominated rapper — as well as an entrepreneur, community activist, and father of two. Within the music industry, he was an established presence who had collaborated with artists as big as Drake and Diddy.

He also had a violent past and had spoken publicly about his long affiliation with the Rollin’ 60s, an LA-area gang that is connected to the Crips. But more recently, it seemed as though Hussle had distanced himself from the gang. He was involved in community activism, working to empower and employ underprivileged groups through real estate investments, science and tech learning centers for teens, and other efforts in inner-city Los Angeles.

Hussle was reportedly planning to attend an anti-gang violence meeting on the day he died, scheduled for not long after he and two other men were shot outside a store he owned called Marathon Clothing.

While early news reports suggested Hussle’s murder was gang-related, the Los Angeles Police Department’s ongoing investigation has revealed that Hussle and his suspected killer — a man named Eric Holder, who was arrested Tuesday night — got into a heated argument prior to the shooting. While Holder is alleged to be a gang member himself, the New York Times reports that the LAPD does not believe the argument or shooting was gang-related. There is still no clear motive. (Additionally, a vigil held for Hussle on Tuesday erupted into chaos when a fight and alleged sounds of gunshots caused a stampede that injured 19 people. However, police have confirmed no one was shot at the scene.)

Hussle’s death continues to boost the artist’s renown within a mainstream that hardly knew him. Social media eulogies from celebrities have started to familiarize those unaware with Hussle’s music, but Hussle was much more than that. His death has made it clear that his legacy will also be anchored to his successful journey out of the roughest corners of LA to become a community-focused business leader.

Nipsey Hussle was an indisputable force in the West Coast rap scene, even though he wasn’t a household name

Born Ermias Davidson Asghedom in 1985, Hussle had been a force in the SoCal rap scene for nearly 15 years. He released his first mixtape, Slauson Boy Volume 1, in 2005, when he was 20 years old and dedicated to living up to the name he chose for himself, “hustle.” His sound was defined by a reverence to the West Coast gangsta rap of the 1990s, his flow markedly different from the more pop-adjacent hip-hop dominating the radio in the mid-aughts.

His sound left an impression among the local indie scene he toured in. And buzz around the 2005 tape caught the ear of executives at Epic Records. In 2008, Hussle released two mixtapes with the label: Bullets Ain’t Got No Name Vol. 1 and Vol. 2.

Though hip-hop fans lauded the albums, Hussle’s releases under the Epic Records umbrella failed to make much of an impression on the Billboard charts and received little radio airplay.

Epic Records began to unravel financially in 2010, and Hussle took the opportunity to go independent, shifting his priorities to the audience that had already proven its loyalty. He put out mixtapes for free at a steady clip. And by 2013, he’d built up a large enough following to try a unique business model for his next release: His mixtape Crenshaw — an ode to the predominantly black, tight-knit Crenshaw District in the southern LA area, where he grew up — made waves because Hussle opted to make all digital copies of his album available for free, while selling 1,000 physical copies for $100 each.

“The reason I chose to charge $100 dollars each copy and only start with 1000 units is because I tailor making my music for those who are listening … it’s not about stepping outside of what I’m known for in hopes of new discovery. What that means less is fans that are better served,” he explained in a statement to Rap Radar.

Jay-Z reportedly snapped up 100 copies, helping fuel a response to the Crenshaw stunt that raised Hussle’s profile. After that, Hussle continued to tour and release mixtapes for free on a regular basis, while drawing on the Crenshaw experience to further revolutionize his business.

“I think you can give a pure artistic product if you understand how to build your own industry,” Hussle told Forbes in 2015, following the release of his independent album Mailbox Money, which saw him up the ante on his Crenshaw release model: This time, he made only 100 physical copies of the new album available, for $1,000 each. “A solution built by an artist serves the artist more than the solution the capitalist comes up with,” he said.

The move once again put Hussle the radar of music industry execs, and eventually led him back to the studio with a new label, Atlantic Records, which he said in a Billboard interview would help bring him “to the next level.” In 2018, he released Victory Lap, featuring collabs with CeeLo Green and Kendrick Lamar.

“Debuts are usually albums of firsts, but Victory Lap is full of sequels and standards […] it is returning to Nipsey’s well for hard-nosed bully rap,” reads a positive review from Pitchfork. “The hour-long album honors all the work he’s put in and looks back at all he’s achieved, but it also looks forward to all he has yet to build and all those he can still inspire.”

A spot on the Billboard album charts and a Grammy nomination for Best Rap Album followed; Rihanna and LeBron James counted themselves as fans. Just last week, John Legend had filmed a video with Hussle, which he tweeted about on the night Hussle died; Drake said on Instagram that he and Hussle had recently discussed working on a song together.

Hussle’s music was deeply connected to his history with the Rollin’ 60s, a group connected to the Crips largely based out of Crenshaw. He was open about his membership in the gang, which started when he was a teen, as he told WBUR in 2018. But in the same interview, he spoke proudly of “making it out” unscathed.

“In my section of the Crenshaw District in the Rollin’ 60s, none of my peers survived. None of my peers avoided prison,” he said. “None of ’em. Everybody got bullet wounds and felonies and strikes. So to make it out mentally stable and not in prison and not on drugs, that’s a win.”

Hussle’s evolution from self-proclaimed gang member to major-label signee was bolstered by several philanthropic efforts, which he began in earnest in 2017.

In 2017, Hussle bought real estate in the Crenshaw District (with DJ Khaled as a partner), including what became his clothing store, Marathon. Marathon was conceived both as a way to promote commerce in a lower-class area and as an experiment that blends smart technology with brick-and-mortar retail: Consumers can use their smartphones in the store to order directly from the brand, and Hussle described the environment as having a Starbucks-like vibe.

By 2018, he had also co-founded a science- and tech-focused center for underprivileged youth in the neighborhood; a WeWork-style coworking space was attached. He spoke of finding inspiration in Silicon Valley leaders like Mark Zuckerberg and Elon Musk, so-called disruptive thinkers. (He was also a fan of bitcoin.)

Those communities will hopefully continue to benefit from Hussle’s work to give back to the neighborhood that raised him.

It’s hard to say why Hussle — despite his activism, investment portfolio, critical accolades, famous fan base, and even occasional controversy, like being called out for making homophobic comments — didn’t gain a wider audience before his death. Perhaps it’s due to his prominence in what GQ’s Mark Anthony Green called “the branch on the pop-culture tree” that Anthony thinks of as “The Branch White America Hasn’t Exploited Yet.” In other words, Hussle catered his efforts to, and attracted the attention of, primarily black audiences.

“The artist part of me always wants to be appreciated,” Hussle told GQ in February, speaking about his more niche fame. “I read every review. But I never wanted to seek validation by awards or anything controlled by politics.”

But his efforts didn’t go unnoticed by the community he availed himself to. Like Hussle, actress Issa Rae of HBO’s Insecure grew up in South Los Angeles, and in the days following Hussle’s death, she spoke about growing up with the rapper in an interview with Buzzfeed News, recalling Hussle’s eventual support of and influence over local residents, including herself.

“In my mind, I was like, ‘Cool, as soon as I get coin, that’s the same thing I’m gonna do,’” Rae told Buzzfeed. “And for him to invest so much, to be of the community and then to be gunned down in that same area is just heartbreaking.”

In the wake of Hussle’s death, his most famous fans have surely already done wonders for a career that mostly flew under the radar. But Nipsey Hussle will always be Nipsey Hussle’s best promoter.

“It was the culture that taught me to keep going,” Hussle wrote last October for the Players’ Tribune, in which he explained why he was devoting time to refurbishing an old neighborhood basketball court. “To bet on myself. As an individual, as an artist and as a leader of a crew — I carry that mentality with me wherever I go. It’s not just me, it’s a lot of us from L.A. It’s the mentality of, We ain’t turning down nothing. We here for all requests and invites. We not making excuses. We going forward.”