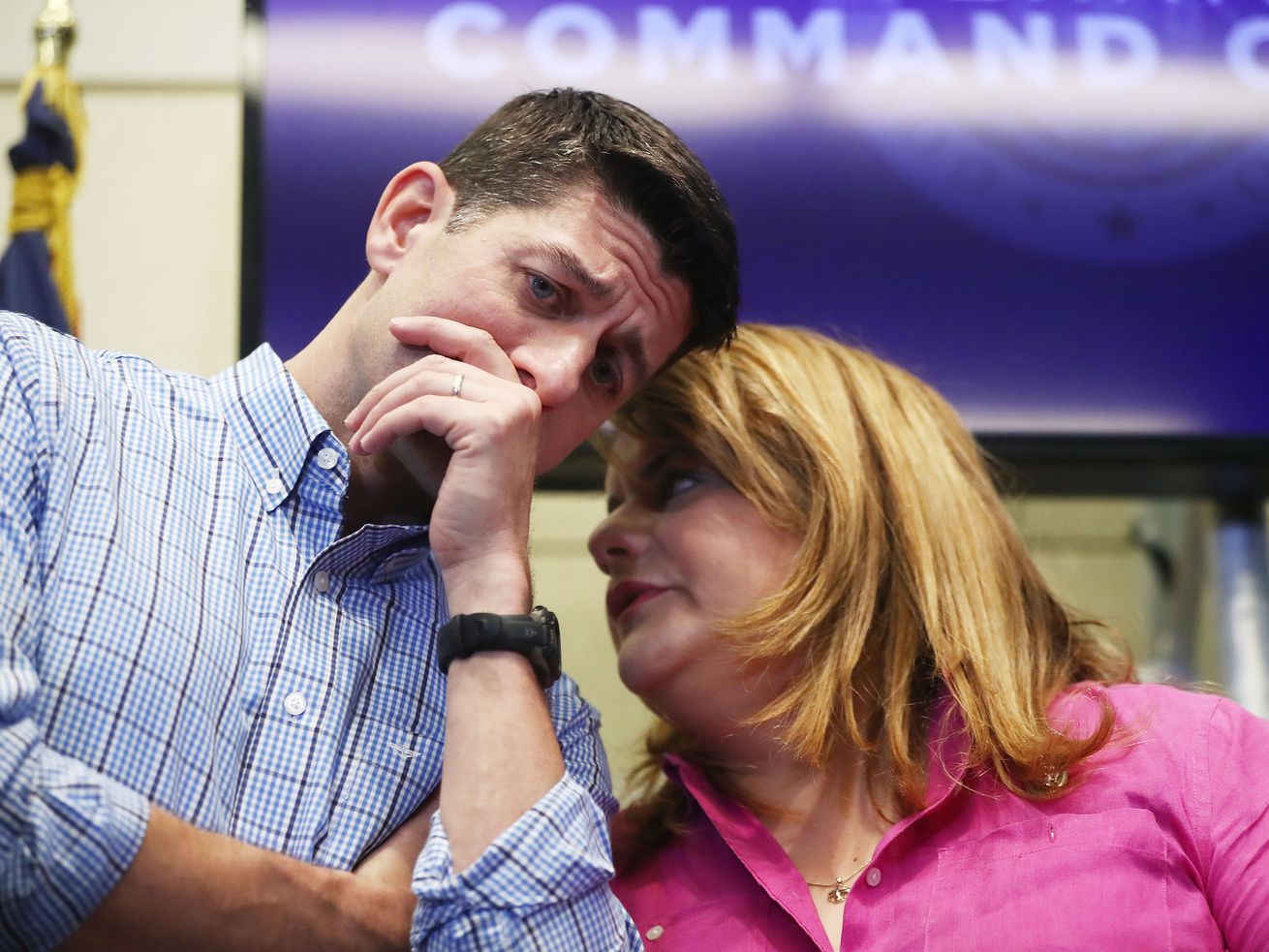 Hurricane Maria proves that Puerto Rico’s status as a territory is a human rights issue.

It’s official: Hurricane Maria was the deadliest natural disaster to hit US soil in more than a century.

Nearly 3,000 Puerto Ricans, who are American citizens, died in connection to the Category 4 storm that hit the island about a year ago, according to a report published Tuesday by researchers at George Washington University. The updated death toll confirms what many people already knew: that the original death count of 16 was way off, and that the local and federal government failed to protect the lives of millions of US citizens who live on the island.

On Tuesday, Puerto Rico Gov. Ricardo Rosselló acknowledged the new death toll and — for the first time — took responsibility. President Donald Trump did no such thing.

After Rosselló updated the official death toll to 2,975 on Tuesday, White House press secretary Sarah Sanders released a statement saying that Trump is proud of the federal response to Hurricane Maria, and that the US government will continue to support Puerto Rico’s recovery.

Trump never acknowledged the deaths of his fellow Americans. Instead — when asked directly by a reporter — he downplayed the news and reiterated that his administration “did a fantastic job” and suggested that Puerto Rico was grateful.

That a sitting US president would expect no political consequences from showing zero empathy toward the deaths of so many American citizens crystallizes the fact that Puerto Rico’s status as a US territory is more than a civil rights issue — it’s a human rights issue.

More than 3 million US citizens live in Puerto Rico with fewer constitutional rights than anyone living in one of the 50 states. Americans on the island can’t vote for president in the general election or elect a voting member of Congress. But the federal government’s response to Hurricane Maria has shown that the problem is even uglier than that: Puerto Rico’s status as a US territory, which is rooted in racist legal rulings, has created a class of citizens whose lives are valued less, and whose deaths can be ignored by America’s most powerful leaders.

Puerto Rico is asking to become a US state. In fact, political leaders have been asking for a clear path to statehood since the 1960s. In 2016, the pro-statehood political party won control over the island’s legislature, the governor’s mansion, and the island’s sole (non-voting) congressional seat. Since then, Puerto Rico’s representative in Congress, Rep. Jenniffer González-Colón, has introduced two House bills that would allow Puerto Rico to become the 51st American state — one before Hurricane Maria hit, and the other this summer.

“Now is the time,” González-Colón said in a statement in June, when she introduced the Puerto Rico Admission Act of 2018. “The catastrophe left behind by Hurricanes Irma and María unmasked the reality of the unequal treatment of the American living in Puerto Rico.”

Past presidents have supported statehood for Puerto Rico, if that’s what the majority of Puerto Ricans wanted. Presidents George W. Bush and Barack Obama did. Support for statehood was even enshrined in the 2016 Republican Party platform.

This is Puerto Rico’s most aggressive push for statehood yet. The fact that few members of Congress are listening — even as the island struggles to recover from a massive economic and humanitarian crisis — shows how meaningless American citizenship can be.

The territorial status of Puerto Rico has been the main political issue on the island since the United States annexed it in 1898 at the end of the Spanish-American War. Over the years, Congress has ceded small amounts of autonomy to Puerto Rico, which now operates as a quasi-state. It has an independent elected local government, but without all the power and benefits of being a state — including a lack of real representation in Congress.

Puerto Ricans who live on the island pay most federal taxes, but not taxes on income earned within Puerto Rico. The island gets limited funding for Medicaid and food stamps. It’s not represented in the Electoral College, so Puerto Ricans can’t vote for president unless they live in the mainland United States.

While Puerto Ricans have been fighting about their political status for decades, Congress has shown little interest in changing anything. Washington lawmakers have introduced more than 130 bills to resolve Puerto Rico’s political status, and none have gone anywhere, said Charles Venator-Santiago, a political science professor at the University of Connecticut. That’s partly because there is no defined process for statehood.

The closest Puerto Rico got to changing its status was in 1990, when the House approved a bill that would let Puerto Ricans decide once and for all whether they wanted to become a state. The bill never made it through the Senate.

Congress told Puerto Rico to vote on statehood, so it did

There is no official process for a territory like Puerto Rico to become a state, but previous states have been added to the union by passing ordinary legislation. When Congress asked Gov. Rosselló to hold a referendum vote last year to see again what Puerto Ricans really wanted, the vast majority voted in favor of statehood: 97 percent, the largest number yet.

The problem is that fewer than a quarter of registered voters turned out to the polls. That was mostly the result of a boycott from the anti-statehood political groups, who were upset with the wording of the referendum.

Rosselló was elected governor on the promise that he would push forward with the statehood process. Puerto Rico’s two main political parties represent those who are in favor of the change and those who want to remain a commonwealth. A smaller number of Puerto Ricans belong to a party that seeks full independence.

The island’s economic crisis, which began in 2006, had revived the push for statehood. Its brutal recovery from Hurricane Maria — and Washington’s lackluster response — has only made the issue of statehood more urgent.

President Trump likes to remind everyone that Puerto Rico was already a mess before Hurricane Maria. It’s true; the government was completely broke. And while Puerto Rico’s leaders deserve rightful blame for the island’s financial woes, so do lawmakers in Washington.

Congress made it super expensive to live and do business in Puerto Rico for most of its history as a US territory. That’s largely a result of the Merchant Marine Act of 1920 (known as the Jones Act), which requires companies to hire US-based shipping crews to transport goods between US ports instead of letting them hire crews who offer the best price. The law did not exempt Puerto Rico, even though it’s an island in the Caribbean and can’t get goods trucked in. The law makes it expensive for Puerto Ricans to buy food, gas, and basic consumer goods from the mainland — and for US companies to operate there.

In 2006, Congress removed a tax-incentive program to encourage investment in Puerto Rico, prompting US companies to leave the island, along with their workers. That move, which coincided with the Great Recession, collapsed the territory’s tax base and led the Puerto Rican government to issue bonds and rack up massive debt to pay its bills.

In May 2017, after the pro-statehood party swept into office, Puerto Rico filed for bankruptcy-like protection. Then a month later, Puerto Ricans voted to become a US state. Congress did nothing.

A few months after that, Hurricane Maria hit.

Hurricane Maria’s Category 4 winds flattened homes across Puerto Rico and left everyone without power, causing the largest blackout in US history. Many people ran out of food and water within days.

The response from the Trump administration was painful to watch. Trump didn’t visit the island until three weeks after the storm hit, and once he was there, he downplayed the severity of the storm and accused Puerto Rico of costing the government too much money.

The Federal Emergency Management Agency did send thousands of emergency responders, but they were unprepared for the task. The agency delayed crucial reconstruction aid to Puerto Rico, and hired inexperienced contractors to send much-needed supplies, including one company that failed to deliver thousands of meals. I could list all the ways the federal government treated disaster victims in Puerto Rico differently than other US disaster victims, but Politico ran a good piece that sums it up.

The government of Puerto Rico was unprepared too. Rosselló, the governor, couldn’t get government employees back to work, and had no plan to get food and water to Puerto Rican families trapped on remote parts of the island. The electric utility company took nearly a year to reconnect everyone to the power grid.

This week, Rosselló held a press conference and updated the official death toll, and he acknowledged for the first time that the government had failed the 3,000 people who died from the storm.

“I am the governor of Puerto Rico, so I assume whatever responsibility that comes my way,” @ricardorossello said about the death toll controversty in Puerto Rico following Hurricane #Maria “I am subject to criticism.”

Trump has refused to take any blame.

“We have put billions and billions of dollars into Puerto Rico, and it was a very tough one,” he told reporters on Wednesday.

Five months after Maria hit, in January, a “shadow” congressional delegation of seven politicians from Puerto Rico traveled to Capitol Hill. They demanded they be recognized as voting members of Congress. Five of them would represent Puerto Rico in the House, and two in the Senate.

Rosselló modeled the plan after Alaska’s push for statehood in 1956, and it was a major part of his campaign for governor. (Tennessee was the first territory to send a congressional delegation to Washington in 1795, and it’s now known as the “Tennessee Plan.”)

Puerto Rico’s delegation was appointed, not elected, so the move was largely symbolic. But it represented a growing sense of desperation and frustration over Congress’s lack of interest in recognizing Puerto Rico as a state.

In June, González-Colón introduced the statehood bill and got a group of 53 Republicans and Democrats to co-sponsor it. The Puerto Rico Admission Act would create a task force to immediately start the process of transitioning Puerto Rico into a US state, which would happen by January 1, 2021.

This won’t be an easy task. Adding a new state to the union is not something to take lightly. It would have a huge impact on the American budget, economy, and political landscape. And it’s still unclear exactly how many people in Puerto Rico want statehood. But the issue is worth serious consideration for two reasons. First, the US government has been promising Puerto Rico the possibility of statehood for decades. Second, Puerto Rico is in really bad shape, and the US government is largely responsible for the island’s current state of affairs.

Counting on the Trump administration to keep its promise to support Puerto Rico’s recovery is likely naive. FEMA recently canceled much-needed funding to remove hurricane debris in Puerto Rico and will stop paying housing assistance to hundreds of hurricane victims who lost their homes during the storm.