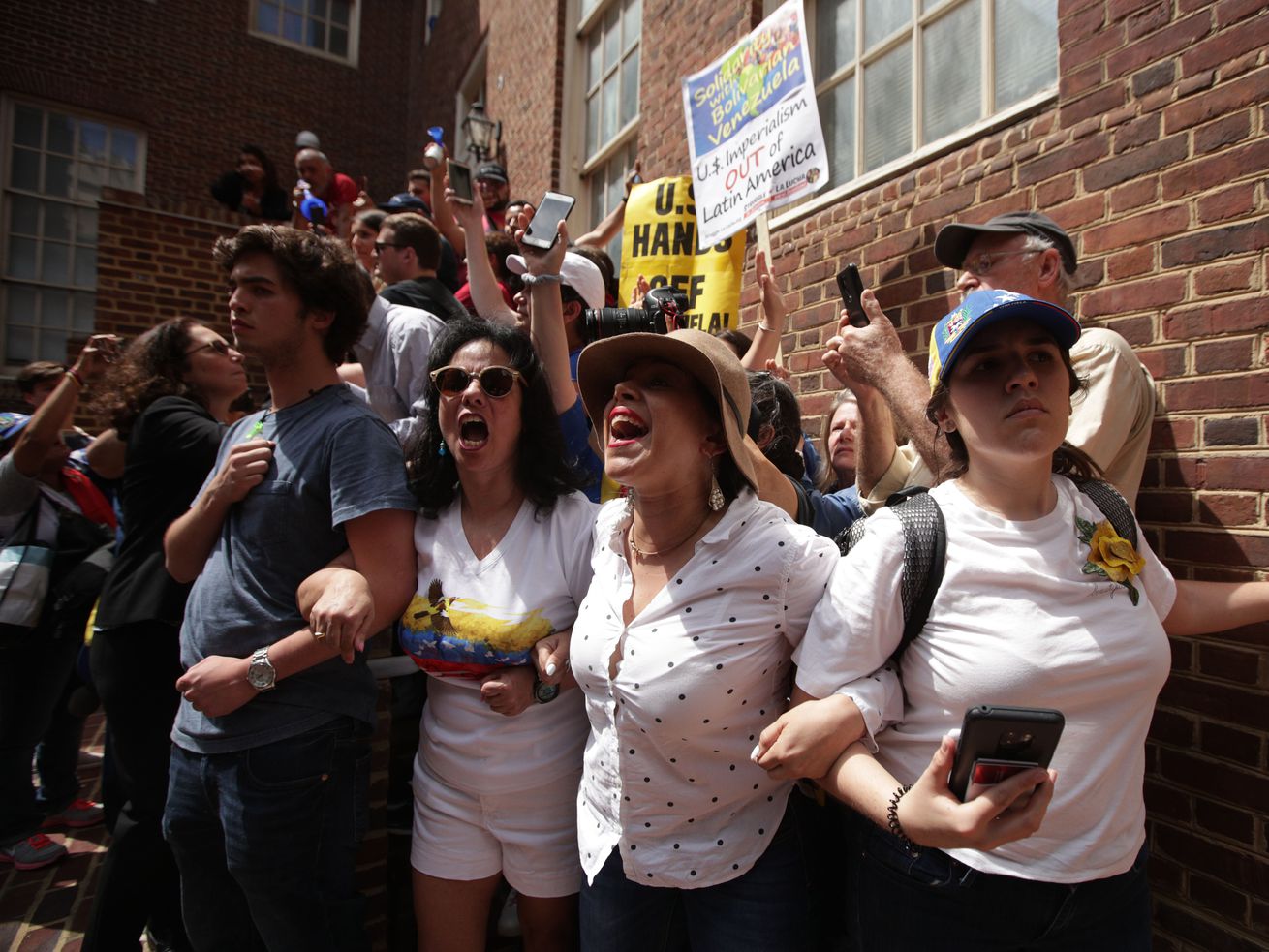 Screaming. Chanting. Sirens. Insults. And then a little violence.

That was the scene outside the Venezuelan Embassy in Washington, DC, on Thursday as a group of people critical of President Nicolás Maduro clashed with anti-US intervention protesters who have been occupying the mission for more than two weeks.

About four months ago, Juan Guaidó, the head of Venezuela’s National Assembly, declared himself to be Venezuela’s rightful president according to the country’s constitution, since, he argues, Maduro rigged the election last May. The US and more than 50 countries have backed Guaidó’s claim, while Russia, China, Cuba, and others support Maduro’s rule.

Besides formally recognizing Guaidó as the country’s president, the US has also hinted at the prospect of a military intervention in Venezuela, angering a lot of people previously uninvolved with the disagreement.

The diplomatic standoff is now playing out in unforeseen ways — like the tussle at the Venezuelan Embassy in Georgetown.

The action started at around 11:30 am, when the anti-US intervention protesters held two separate press conferences, one from inside the embassy near a window and another outside the mission in the warm sun. They were nearly drowned out by the anti-Maduro crowd, who blasted loud sirens on their bullhorns. Still, both sides managed to get their messages across: “Hands off Venezuela!” (the anti-interventionists) and “Hands off our embassy!” (the anti-Maduro crowd).

The roughly 20 anti-Maduro activists, mostly Venezuelans, have blocked access to the embassy for two days so that the anti-intervention protesters, who say they received keys from Maduro’s diplomats and permission from Maduro’s government to stay there, can’t enter again if they leave. About 15 activists from groups like Code Pink and Popular Resistance then tried to deliver food and medicine to the 25 people inside.

That’s when the chaos really began.

As the anti-intervention crowd approached the embassy doors carrying oranges, bread, and other supplies, anti-Maduro activists stood in front of doorways and stairs on the back side of the embassy. That led both parties to chant more slogans at one another until Ariel Gold, a Code Pink national co-director, sat right in front of the blockade.

Meanwhile, other protesters threw food at the embassy’s windows and doors in an attempt to get it to the people inside. At one point, someone from inside the embassy quickly grabbed the materials thrown outside a side door and rushed back inside.

The Secret Service, which was monitoring the situation, got involved once a skirmish broke out near a back, covered entrance to the embassy.

By the end, two anti-interventionists — including Gold — and one anti-Maduro activist were arrested and whisked away by agents through a small alleyway behind the mission.

Chants and sirens rang out during the entire event, which lasted for about an hour. All were talking — well, screaming — and none were listening. But that wasn’t that surprising based on my conversations with many of the participants over the past three days. The two groups of protesters have stridently different views of the situation as it’s unfolding, and there doesn’t seem to be much agreement about even the basic facts of the situation.

Indicative of the kind of discussions happening outside the Venezuelan embassy right now. pic.twitter.com/LhNGDhkiBa

Why there are anti-US intervention activists occupying the Venezuelan Embassy

On Monday, I spoke to activists inside the embassy from Code Pink, an antiwar group, about why they were occupying the space. Gold told me her team was living and working inside the mission because they oppose US-led conflict and intervention.

“We are willing to put our bodies on the line” to stop President Donald Trump’s support of Guaidó, something that should be deeply troubling to all Americans,” she told me. “We are opposed to this US coup.”

In other words, she says America’s support for Guaidó is nothing less than thinly veiled regime change.

She had a relatively small team with her when I arrived that afternoon, with only a handful of staffers sitting at a conference table near a living room-like area and kitchen. All the people who stay in the embassy, many of whom haven’t left it for weeks, work in that space and sleep in abandoned offices all around the building.

Among the people in that room was Kevin Zeese, a leader of the pro-Maduro group Popular Resistance. When I spoke to Kevin, a 63-year-old from Baltimore, he was sporting a blue “Chavistas” shirt emblazoned with the face of Hugo Chávez, the late socialist dictator and Maduro’s mentor.

“He’s not a dictator,” Zeese told me of Maduro, saying that Venezuela’s problems were mainly caused by US-imposed sanctions. And what did he think of Guaidó, then? “He’s a fraud under Venezuelan law,” because Maduro won his election last year, Zeese told me.

He added that he and others in his group traveled to Venezuela recently and saw no violence and not much poverty. According to him, the real reason America wants Maduro gone is so it can install a puppet who grants the US access to the country’s oil reserves and other resources.

Zeese, who remains in the embassy, and Gold, who was arrested, have both referred to the mission’s residents as the “Embassy Protection Collective.” They say their aim is to keep it out of the hands of Guaidó’s diplomats until the US and Maduro’s government can resolve their differences without war.

Their efforts don’t sit well with Venezuelans who want to see Maduro gone.

Why there are anti-Maduro Venezuelans protesting outside the embassy

After my Monday visit, I returned to the embassy at around 10:30 am on Thursday. I wanted to get a sense for why some people felt just as passionate about staying outside the embassy as Zeese and Gold do about being inside it.

Among the many I spoke to was Matthew Burwick Orta, a 51-year-old engineer who left Venezuela and now lives in North Carolina. Ten days ago, Burwick drove his pickup truck to DC to see the occupied embassy. He’s since remained outside the building every day, not getting much sleep, and trying to make his case to those inside.

His worry is that if the people inside the embassy don’t have to live with the consequences of living in a Maduro-ruled country. “If they’re wrong about Maduro, they get to stay in [America],” he told me in Spanish, visibly sleep-deprived. “They won’t have to deal with the crisis that engulfs my country” if Maduro isn’t forced out.

Burwick Orta said he doesn’t consider the embassy’s occupants to be his enemy, but he does think that they’re misinformed. “Venezuela is imperfect, but it can be made more perfect,” he continued. “Maduro won’t let that happen.”

Many agree with him, but some just want the occupiers to leave so that the building can go back to being a functioning embassy again. Anly Renda, a business developer who has been in the US for six years, told me her passport expired and she needs to renew it. But she can’t do that since the embassy doesn’t contain diplomats, only unhelpful activists.

“We want to go in our own embassy,” with our own diplomats, Renda, 28, told me. She and others sounded the loud sirens to drown out the embassy’s residents and have slept in a green tent behind the mission not only to make a point, but also to keep watch so no one enters the building.

Still others I spoke to outside the embassy discussed similar stories about how they suffered for decades living under Chávez and Maduro, and how their families back in Venezuela are hungry, sick, and poor. It’s that kind of reality that made 40-year-old Maria, who didn’t want to give me her last name or occupation for fear of retribution against her family, wonder why Maduro has such staunch defenders inside the embassy.

“If they like him so much, let them go and live there for two months,” she told me. “Let’s see how much they like it.”

The embassy showdown explains how tense the Guaidó-Maduro standoff is

The reason for this week’s Washington clash is because of dramatic events happening back in Venezuela.

At dawn on Tuesday, Guaidó launched his boldest — and riskiest — gambit yet to push Maduro out. He released a video calling on the entire country, including the military, to rise up and overthrow the dictator once and for all.

Flanked by a few dozen armed members of the Venezuelan National Guard and several armored vehicles at an airbase in the capital city of Caracas, Guaidó announced the start of what he called “Operación Libertad” (Operation Liberty), which he said was the “final phase” of the push to remove the socialist leader.

“Our armed forces, brave soldiers, brave patriots, brave men who follow the constitution have heard our call,” Guaidó in the video. “People of Venezuela, we will go to the street with the armed forces to continue taking the streets until we consolidate the end of usurpation, which is already irreversible.”

The problem for Guaidó, though, is that few troops defected — leaving Maduro still in charge. It’s unclear as of now if Guaidó has enough literal and figurative firepower to dislodge Maduro in the coming days, weeks, or even months.

That means Guaidó and Maduro loyalists will surely square off in the days ahead, both in Venezuela and outside an embassy in Washington.