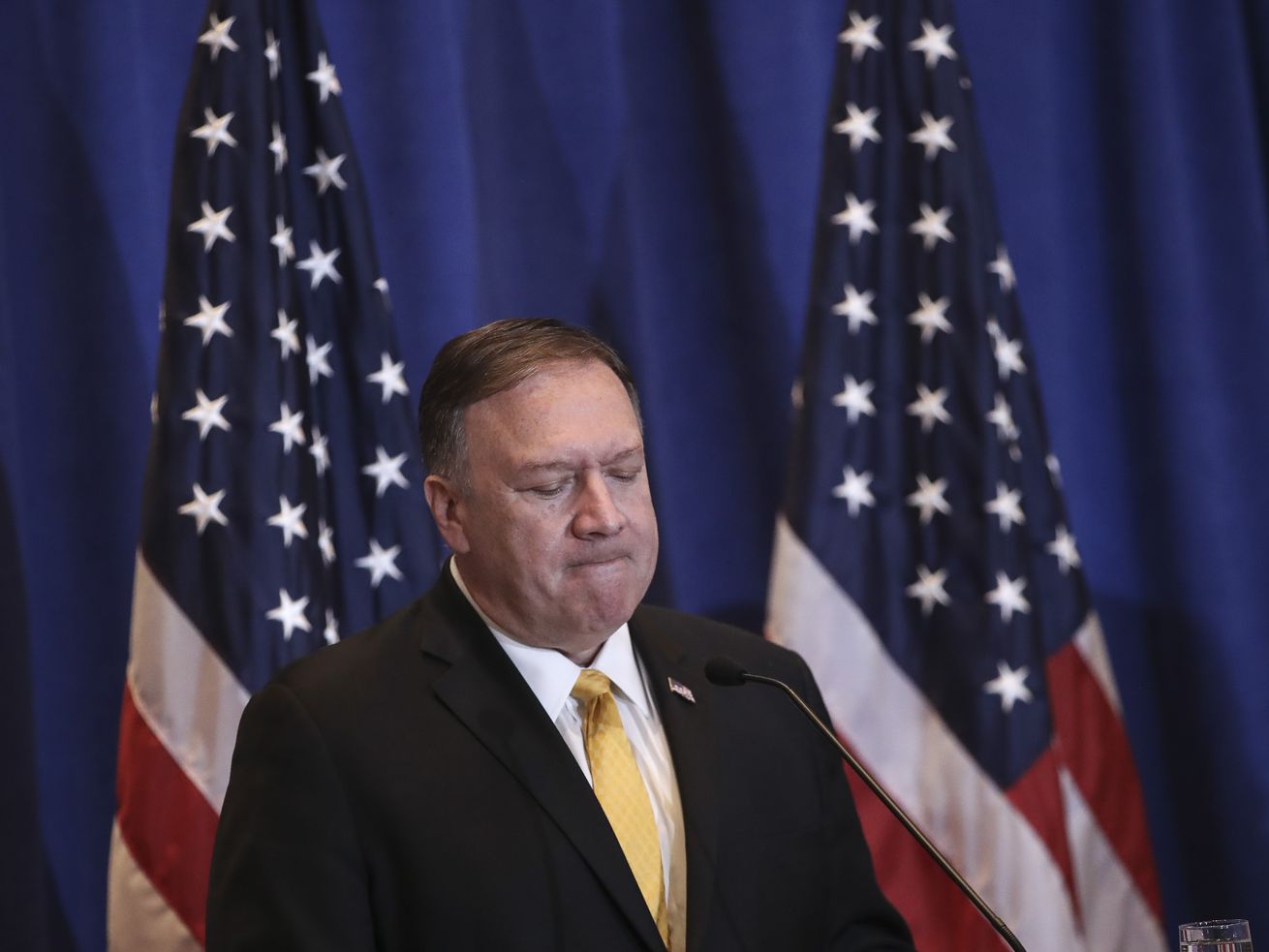 The secretary of state pushed back against lawmakers’ requests to interview officials who might be witnesses in the Ukraine scandal.

Secretary of State Mike Pompeo is pushing back against House Democrats’ effort to investigate the State Department’s involvement in the Ukraine scandal as part of their impeachment inquiry into President Donald Trump.

Last week, top House Democrats wrote to Pompeo to notify him that they had scheduled depositions of five current and former State Department officials who might have knowledge about Trump’s efforts to pressure the government of Ukraine to investigate Joe Biden and his son, Hunter. The depositions were scheduled to take place this week and next week.

But Pompeo, in a fiery letter to House Foreign Affairs Committee Chair Eliot Engel (D-NY) on Tuesday, accused the Democrats of trying to pressure State Department officials and failing to follow proper procedures.

“I’m concerned with aspects of the Committee’s request that can be understood only as an attempt to intimidate, bully, and treat improperly the distinguished professionals of the Department of State, including several career Foreign Service Officers, whom the Committee is now targeting,” Pompeo wrote.

I’m concerned with aspects of the Committee’s request that can be understood only as an attempt to intimidate, bully, & treat improperly the distinguished professionals of the Department of State, including several career FSOs. pic.twitter.com/QRtMaXlhQM

“Let me be clear: I will not tolerate such tactics, and I will use all means at my disposal to prevent and expose any attempts to intimidate the dedicated professionals whom I am proud to lead and serve alongside at the Department of State,” Pompeo added.

Pompeo’s letter was the first warning shot in what’s probably going to be a long, drawn-out battle between Congress and the administration over documents and witness testimony as House Democrats pursue impeachment.

Pompeo’s heated response also comes a day after the Wall Street Journal reported that Pompeo had listened in on the July 25 call between Trump and Ukrainian President Volodymyr Zelensky in which Trump asked Zelensky to investigate Biden and his son, Hunter.

Top House Democrats were quick to point this out in their response, and flung the allegation of intimidation back at Pompeo himself.

“Secretary Pompeo was reportedly on the call when the President pressed Ukraine to smear his political opponent. If true, Secretary Pompeo is now a fact witness in the House impeachment inquiry. He should immediately cease intimidating Department witnesses in order to protect himself and the President,” Engel, House Intelligence Committee Chairman Adam Schiff (D-CA), and House Oversight Committee Chairman Elijah Cummings (D-MD) said in a joint statement.

“Any effort to intimidate witnesses or prevent them from talking with Congress—including State Department employees—is illegal and will constitute evidence of obstruction of the impeachment inquiry,” the statement continued. “In response, Congress may infer from this obstruction that any withheld documents and testimony would reveal information that corroborates the whistleblower complaint.”

The State Department’s role in the Trump-Ukraine scandal is still developing, but House Democrats are trying to figure out how much officials knew about Trump’s interactions with Ukraine, and whether Trump’s personal attorney, Rudy Giuliani, coordinated with officials in the State Department to pursue his outreach with the new Ukrainian administration.

Pompeo’s pushback isn’t all that surprising; it’s to be expected as Congress investigates and moves forward with their impeachment proceedings. But the pugilistic tone of the letter— implying that Congress is trying to bully or coerce career officials into cooperating — stands out, especially since Pompeo made his name in Congress by relentlessly investigating the State Department over Benghazi, and some of Pompeo’s top aides have been accused of partisan retaliation against career officials in Foggy Bottom.

Either way, take it all as a sign the administration has no intention of quickly cooperating with House Democrats’ demands. And this is just the beginning.

Top House Democrats want to depose five former and current officials, and they told Pompeo in a letter dated September 27 that those depositions had been scheduled starting Wednesday. “The failure of any of these Department employees to appear for their scheduled depositions shall constitute evidence of obstruction of the House’s impeachment inquiry,” the letter said.

The officials on that list included Ambassador Marie “Masha” Yovanovitch, the ambassador to Ukraine who was recalled two months early in May, which some Democratic lawmakers have alleged was a “political hit job.” (Trump and Zelensky also talk about her in the July 25 call, though her name is listed incorrectly in the transcript.)

House Democrats also wanted to talk to former US special envoy to Ukraine, Kurt Volker, who stepped down on Friday, a day after the whistleblower report was released that named Volker directly.

The whistleblower alleges that Volker and the US ambassador to the European Union Gordon Sondland met with Zelensky the day after the July 25 call to help the new administration “navigate” Trump’s request.

Rudy Giuliani also went on cable television to display texts between and Volker regarding Giuliani’s outreach to Ukrainian officials. (The whistleblower also says later that Volker was concerned Giuliani’s outreach undermined national security.) But Volker is definitely implicated in the scandal.

But despite Pompeo’s resistance, it does look, right now, as if Yovanovitch and Volker will show up to Congress this week, according to reporting from NPR and the Washington Post.

Volker is a former Foreign Service officer (he was doing the envoy job part-time, and on a pro-bono basis, anyway), so he’s a lot more free to talk — although, as has happened with other former officials in the Trump administration, that doesn’t mean he necessarily will.

The three other State Department officials House Democrats want to talk to are Ambassador Gordon Sondland, also mentioned in that whistleblower report; T. Ulrich Brechbuhl, a top Pompeo aide whom the whistleblower alleged was also on the July 25 call; and Deputy Assistant Secretary George Kent, who oversees European affairs.

Pompeo, in his response, basically said, “Nope” — arguing that the House can’t compel these people to testify because it hasn’t issued subpoenas. Pompeo also says that the Democrats’ letter didn’t give these witnesses enough time to “adequately prepare.”

Josh Chafetz, a law professor at Cornell University, told me in an email that Pompeo’s right that without a subpoena the House can’t compel testimony. But, he said, it’s usually standard to request for voluntary appearances first, and then issue a subpoena when that request is denied. He also said that the House has no obligation to give witnesses a set amount of time to prepare, another of Pompeo’s complaints.

Pompeo raised some other objections to the House Democrats’ request, but the bottom line is the secretary of state isn’t going to make this easy for Congress.

Jamil N. Jaffer, an expert George Mason University Law School and former chief counsel to the Senate Foreign Relations Committee, told Vox that the latest salvo from the State Department “is just the second round in what is likely to be a multi-round exchange of fire likely culminating in mandatory subpoenas that may have to be enforced in court.”

House Democrats did issue a subpoena to Pompeo for State Department documents related to Trump’s July 25 call with Zelensky and anything related to Giuliani’s outreach to the Ukrainian government. (They’d previously asked Pompeo to voluntarily turn them over.) The deadline to comply with that subpoena is October 4.

And now that reports suggest Pompeo himself was also a party to the July 25 call, it seems possible that House Democrats will call the secretary of state to testify at some point.

Given Pompeo’s response on Tuesday, lawmakers will probably need a subpoena to make that happen, too.