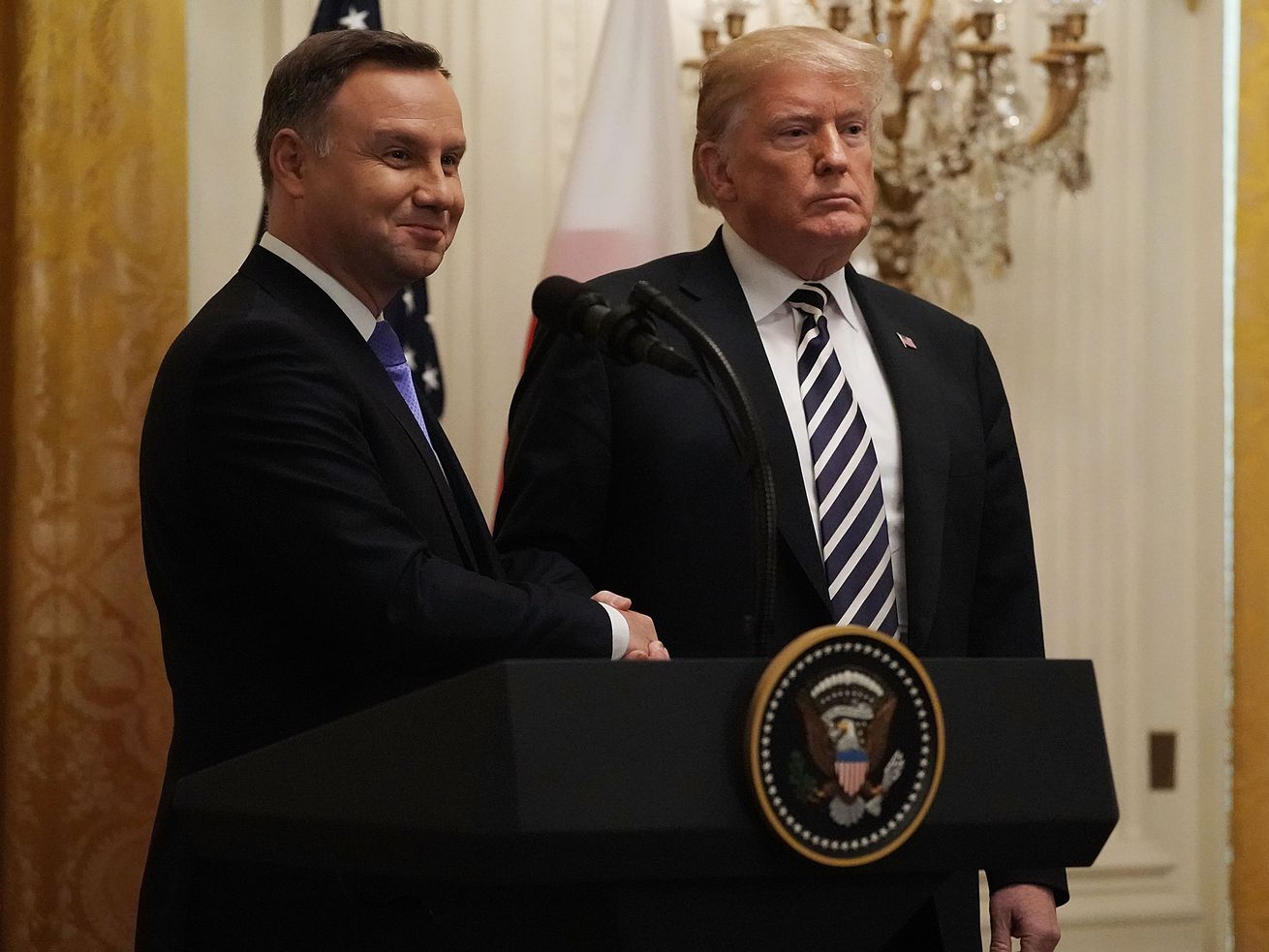 Poland wants a US military base in Poland. Trump might agree to it.

Poland has wanted to host a permanent US military base for years, and it looks like the country might get its wish. There’s also a chance the base will be named Fort Trump.

President Donald Trump suggested on Tuesday that he was open to the idea of installing a base in Poland as long as Warsaw “is willing to make a very major contribution to the United States.”

But Polish President Andrzej Duda, who wants the base both to shore up ties to the US and defend against an increasingly aggressive Russia, sweetened the deal during a press conference alongside Trump hours later, saying he recommends the base be named after the American commander in chief.

While it’s a nakedly obvious ploy by Duda, it’s also a smart move.

He surely noticed — as leaders in Saudi Arabia and China have — that flattering Trump is almost a surefire way to make him a close friend. Saying that Poland would pay $2 billion for the installation — and naming it after Trump — was likely a move to make Trump more amenable to the base idea.

BREAKING: President Trump says he shares the Polish president’s view that the US should have permanent US military bases in Poland; says Russia has acted aggressively, and they respect force and strength, “as anyone does.” pic.twitter.com/GFcEXyr1vT

Duda’s tactic may yet work. “We’re looking at it,” Trump told reporters at the press conference about setting up the base.

The Pentagon did not immediately respond to a request for comment about whether or not it’s preparing for a future base in Poland.

Why a US base in Poland would anger Russia

It’s safe to say that Russia won’t be happy with the Trump-Duda press conference.

Poland, which borders a Russian enclave known as Kaliningrad, was once a satellite state of the Soviet Union. The country was bound to Moscow by something called the Warsaw Pact.

But Poland has slowly westernized and moved out of Moscow’s orbit. The country is now a member of the European Union and NATO, and continually works to strengthen its relationship with Washington.

Russia doesn’t like the fact that Poland regularly hosts thousands of US and NATO troops, since this puts them extremely close to Russian territory and parts of Europe the Soviet Union once controlled. A permanent US military base there would only make Russia angrier, some experts say.

“It would give Moscow an easy opportunity to claim that NATO is an aggressor and to somehow respond to protect Russian sovereignty,” retired Lt. Gen. Ben Hodges, who until December 2017 led the US Army in Europe, wrote for Politico in June.

That means there would be a chance — not a big one, but a chance — of a fight breaking out near or in Poland over the base decision.

Trump, however, doesn’t see it that way. Russians “respect force, as anyone does,” the president said at Tuesday’s press conference. Putting a base there, he seemed to suggest, would deter Russia from its confrontational stance.

It’s therefore possible that Trump will soon authorize one of the most provocative moves of his presidency — and Russia, of all countries, will be on the receiving end.

But at least he’ll have his name on a military base.