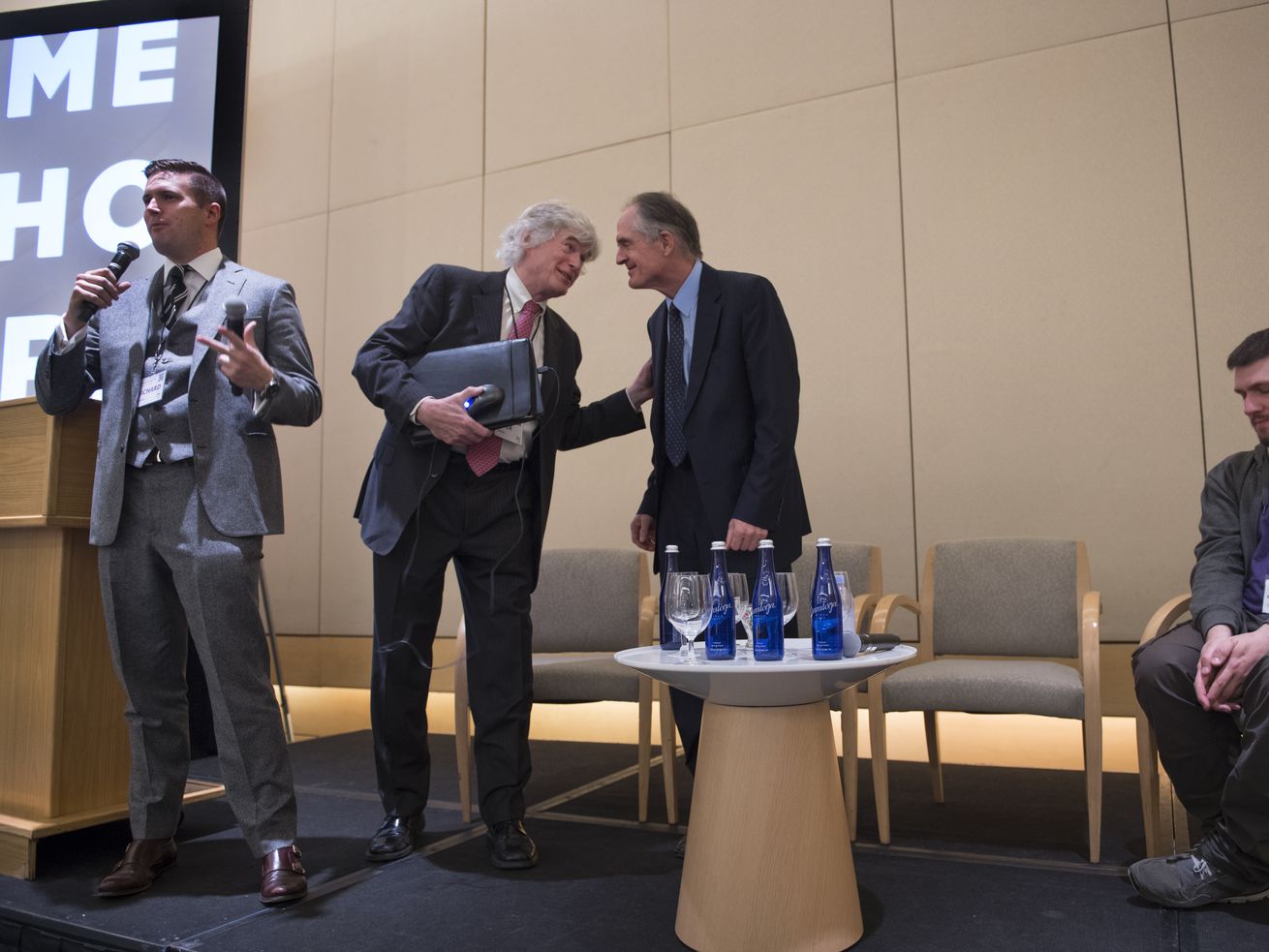 In the midst of a bad news day that didn’t seem like it could get any worse in August, the Washington Post reported that President Donald Trump’s top economic adviser, Larry Kudlow, invited a well-known white nationalist to his birthday party.

Kudlow’s friend in question is Peter Brimelow, the publisher of the heavily anti-immigration and “racial realist” website VDare and a longtime associate of prominent figures in the white-nationalist far right movement. The Post reported Brimelow had visited Kudlow’s home for the party on August 18.

When asked about his association with Brimelow and his work, Kudlow told the Washington Post, “If I had known this, we would never have invited him.” Brimelow responded to the news on Twitter, saying, “Apparently we’re not supposed to have personal friends anymore.”

Apparently we’re not supposed to have personal friends anymore. Who knew https://t.co/0WhD709gNZ

But Brimelow’s work as part of the racist wing of the immigration restrictionist movement, and his associations with alt-right and white supremacist allies, has been well-known and in the public view for decades.

I once interviewed Peter Brimelow in a coffee shop in Chicago for this piece. He spoke about how the “mainstream” anti-immigration groups were too chicken to really lean into the ethno-nationalism of their natural political base. https://t.co/HoIx90ZAIV

And Brimelow himself espouses racist views — arguing at a conference in 2017, for example, “Hispanics do specialize in rape, particularly of children. They’re very prone to it, compared to other groups.” He’s also very close with white nationalists like Richard Spencer and Jared Taylor, and publishes on VDare, by his own admission, “a few writers I would regard as ‘white nationalist’ in that they stand up for whites just as Zionists, Black Nationalists do for Jews, Blacks etc.”

The Kudlow story put Peter Brimelow and VDare, in the spotlight yet again, just days after another Brimelow associate, Darren Beattie, resigned from his speechwriting position at the White House because he spoke on a panel popular with alt-right figures alongside Brimelow. Yet on Monday, Fox News personality Laura Ingraham approvingly shared a piece from VDare on Twitter that castigated former presidential candidate Jeb Bush.

The Trump administration’s reported associations with the alt-right and white nationalist movement have been a story of Trump’s presidency since the inauguration. But with Kudlow’s now-public friendship with Brimelow and VDare’s continuing presence in Trump-supportive right-wing media, those associations are becoming even more explicit.

Who is Peter Brimelow and what exactly does VDare.com espouse?

Before Brimelow was surrounding himself with white nationalists, and, apparently Trump advisers, he was writing for National Review. He was fired in 1997 (part of what some on the far right called a “purge” of racists from the magazine). In 1999, he founded the website VDare, named for Virginia Dare, the first English child born in North America (and for white supremacists, a deeply important symbol.)

VDare describes itself as focused on the “racial and culture identity of America” and only desiring “honest consideration of race and ethnicity, the foundations of human grouping, that human differences can be explained and their social consequences understood, whether those differences are philosophical, cultural or biological.”

But VDare’s perception of itself as focused on “just asking questions” and merely “politically incorrect” is belied by the website itself and its stable of contributors, who include some of the most visible white nationalists in the movement today. That includes Brimelow himself, who has argued that America’s immigration policy is “Adolf Hitler’s posthumous revenge on America” and told talk radio host Alan Colmes in 2016 that he would welcome a return to pre-1965 barriers to non-white immigrants because “I think the US is a white nation.”

The plain fact is that the Obama Administration has very shallow roots in historic America. It is, to put it brutally, a minority occupation government… Diversity is not strength. It is weakness… Washington has forced whites—who for most of U.S. history would have been simply called “Americans”—to recognize, if only for now at a subliminal level, that they have common interests and must act to defend them.

VDare’s contributors include figures like Kevin MacDonald, a psychologist and editor of a “white identity” journal who has argued that Jewish people have genetically evolved with the purpose of undermining non-Jewish people. And he’s cited Holocaust denier David Irving to make unsubstantiated (and wildly-anti-Semitic) claims, like this from his Culture of Critique:

The domination of the Hungarian communist Jewish bureaucracy thus appears to have had overtones of sexual and reproductive domination of gentiles in which Jewish males were able to have disproportionate sexual access to gentile females.

Perhaps needless to say, this sort of argument has attracted some criticism from mainstream scholars. Historian David Lieberman wrote in 2001 of MacDonald’s ideas, “whatever the aspirations that motivate MacDonald’s writings about Jews, the production of sound research that deserves to win acceptance within the scholarly community is not among them.”

Another VDare contributor is white nationalist Jason Kessler, the organizer behind the Unite the Right rallies in Charlottesville, Virginia (which ultimately resulted in the death of anti-racist activist Heather Heyer) and in Washington, DC. Kessler wrote an article on VDare in June 2017 titled “Yes, Virginia (Dare), There Is Such A Thing As White Genocide.”

The numbers do not lie. The double standards cannot be denied. The demonization and campaigns of hatred by the MSM are no longer even concealed. And the policies which replace whites through mass immigration, export their jobs through outsourcing, and make it unaffordable to start families are achieving their planned results. The governments of the West are waging a campaign of slow extermination against their own core populations. It is white genocide.

On the subject of Unite the Right itself, VDare published a defense of the violence in Charlottesville that blamed what took place exclusively on the leftist group Antifa and argued, “Why should Unite The Right apologize for anything? Indeed, how can the ‘Far Right’ be regarded as anything other than an incredibly moderate protest movement against a deliberate campaign of genocide?”

John Derbyshire, another ex-National Review contributor unceremoniously booted from the publication over his arguments that white people naturally have higher IQ than black people in 2012, found a new home for himself at VDare, where he has continued his laser focus on race and racial differences.

Brimelow gave a lot of white supremacists and white nationalists a platform, and he has argued, as he did in 2011, against criticism of VDare that its writers merely “aim to defend the interests of American whites.” They can’t possibly be white supremacists, he says, because, as he writes, “They do not advocate violence. They are rational and civil. They brush their teeth. But they unashamedly work for their people.” He added, “VDARE.com’s position: Get used to it. As immigration policy drives whites into a minority, this type of interest-group “white nationalism” will inexorably increase.”

But VDare isn’t Brimelow’s only foray in the world of white supremacist immigration restrictionism. Not by a long shot.

Brimelow is basically one of the alt-right’s founding fathers

In March 2010, Brimelow joined white nationalist Richard Spencer and Paul Gottfried, an alt-right fellow traveler, to create the magazine Alternative Right — the origin of the term “alt-right.” Not only was Brimelow made senior contributing editor of the publication, the VDare Foundation (of which Brimelow is principal officer) gave Spencer and Alternative Right a $35,000 grant to fund it.

Among the popular posts on Alternative Right is a since-deleted post from 2012, “Is Black Genocide Right?”, which argued black people are part of “a race that has contributed almost nothing to the pool of civilization and which even shows little inclination to stay within the bounds of that civilization; a race that also seems to harbor a potent inferiority complex and savage hatred towards the creators of that civilization”:

The basic habits, ideas, and practices that help civilization to survive and prosper in other parts of the world seem largely absent among large elements of South Africa’s Black population, and it seems that it is only a matter of time before the country sinks to the level of poverty and savagery endemic in most of the rest of Africa and places like Haiti and Detroit. If this is the case, then, rather than the question of White Genocide, shouldn’t the debate really be focused on whether Black Genocide is something worth considering?

And Brimelow’s relationship with white nationalists like Richard Spencer and Jared Taylor has continued, as the three speak on panels together, like this press conference from September 2016 where Brimelow, Spencer, and Taylor spoke about the alt-right’s goals. Spencer mentions a white ethnostate, while Taylor, as described by Alex Pfeiffer of the Daily Caller, “envisioned a PTA meeting where people are discussing the lack of black students in AP classes, and a mother stands up and mentions race’s influence on intellect.”

In short, the relationship between Brimelow and the alt-right and the white-supremacist far right is well known, as is Brimelow’s own writing on the subject — writing for which he was forced out of a major conservative publication more than two decades ago.

For Kudlow to have alleged that these views and work are “a side of Peter that I don’t know” is more than laughable. It’s unbelievable.

What this means for Kudlow — and Trump

Kudlow told Robert Costa of the Washington Post that Brimelow had been “coming to my dinner parties for years” and that “none of this other stuff” — meaning Brimelow’s avowed racism and white nationalist associates — “has ever come up.” And when asked what he would say to Trump about his relationship with Brimelow, he said he would do so “just the way I explained it now, hiding nothing.”

That would likely prove effective, as Trump’s own past dealings with both the alt right and the white nationalist movement would imply that the relationship of another high-ranking Trump administration official with an alt-right figure wouldn’t be a dealbreaker.

After all, Trump employed Steve Bannon, who bragged that his Breitbart website was a “platform for the alt-right,” on both his campaign and in the White House. And, it should be noted, Brimelow and VDare supported Trump in 2016, and Brimelow attended the inauguration.

But appearances still do matter. And Kudlow’s close friendship with someone who has befriended and supported and touted the work of the most virulent elements of the alt-right does markedly little to support Kudlow’s claim that he’s “a civil rights Republican.”