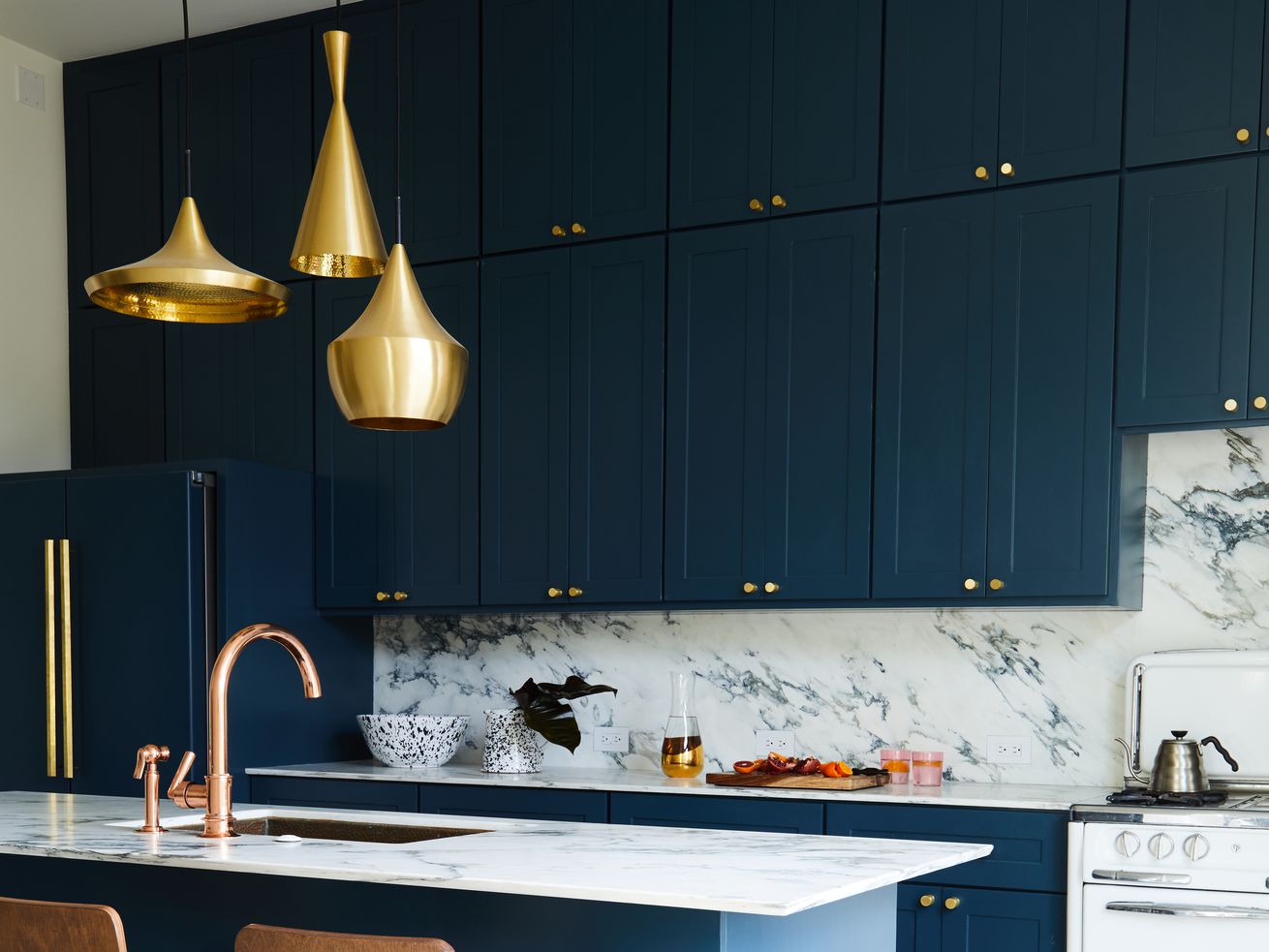 Welcome to Noticed, The Goods’ design trend column. You know that thing you’ve been seeing all over the place? Allow us to explain it.

What it is: The combination of rich blue hues with warm brass accents. The blue is variable — often navy, but extending into turquoise jewel tones.

Where it is: Everywhere in the interior design world, from home kitchens, bedrooms, and living rooms to public spaces like restaurants and hotel lobbies. It can appear in a single item, like an Anthropologie bed upholstered in deep “marine” velvet with brass feet. It can pop up in the form of moody blue cabinets with gleaming brass handles, or in a bar’s navy-painted exterior with brass lettering on its windows, as with the Front Room in Chicago.

Sometimes it’s just about proximity: In the lobby of the Line hotel in Washington, DC, a converted church with spectacularly high ceilings, inky blue velvet couches sit beneath a sculptural chandelier made of the church’s original brass organ pipes. The NoMad LA, which is owned by the same group as the Line, has dressed its hotel rooms in navy paint and brass light fixtures, faucets, and door handles. On its website, West Elm styles a navy sectional couch next to a low coffee table bearing an attractively uneven brass plate.

Why you’re seeing it everywhere: The combination of brass and navy is actually the convergence of two separate design trends, which have similar origins. The housing market crash of 2008 resulted in a lot of all-white interiors, especially in bathrooms and kitchens, says Jessica Dailey, digital editorial director of the home design magazine Domino. A blank slate of a home is easier to sell than a heavily stylized space, and homeowners decorated accordingly. Renters shied away from making alterations to their spaces for fear of losing their security deposits.

During this period, minimalism boomed across the design world. An entire generation of post-recession startups built their branding around sans serif logos, clean lines, and stripped-down color palettes, as though to tell shaken consumers, “We’re not here to bullshit you.” But as the economy recovered, so did homeowners’ appetite for bold color and pizzazz.

“I think that people are more willing to take some risks now and add a little more character to their homes,” says Dailey.

Pale pink emerged out of minimalism’s primordial soup and proliferated across millennial-targeted goods and services, including the popular beauty brand Glossier and the Wing, a women’s co-working space. (The designer India Mahdavi, whose luscious dusky pink chairs and booths materialized at the London restaurant Sketch in 2014, is millennial pink’s viral godmother.) In turn, jewel tones have offered a more sophisticated alternative to pink, and a much-needed visual respite from its insistent youthfulness.

Like pale pink, navy is essentially neutral, making it a natural choice for those whose visual language is still very much steeped in minimalism. It makes a statement, but it’s unassailable.

Brass started to dominate a few years ago — call it 2014 or 2015 — when the home design market hit a saturation point with stainless steel and chrome, says Dailey. It also represents a rebellion against minimalism, with its links to the glitzy interior decor of the Hollywood Regency era and the ’70s and ’80s. But whereas brass accents were buffed to a reflective gleam during those periods (all the better to glance off marble and mirrored surfaces), it gets a quieter matte treatment these days.

“You’ve been seeing it everywhere for a while now. It’s trendy to the point where it almost feels overdone,” says the San Francisco-based interior designer Susan Work, whose own ocean-blue-and-brass kitchen was featured in Domino. “The reason it keeps appearing is that it’s a great winning choice for that impact of color and drama that’s just enough drama in a residential setting without going overboard. But it’s not unsafe either.”

Navy and brass could become oversaturated — surely it will give way to the next aesthetic wave to hit home design — but those who have already invested in it probably don’t need to worry too much.

“Maybe it won’t have staying power,” says Dailey, “but navy and gold is a very classic color combination that I don’t think is going to feel dated.”