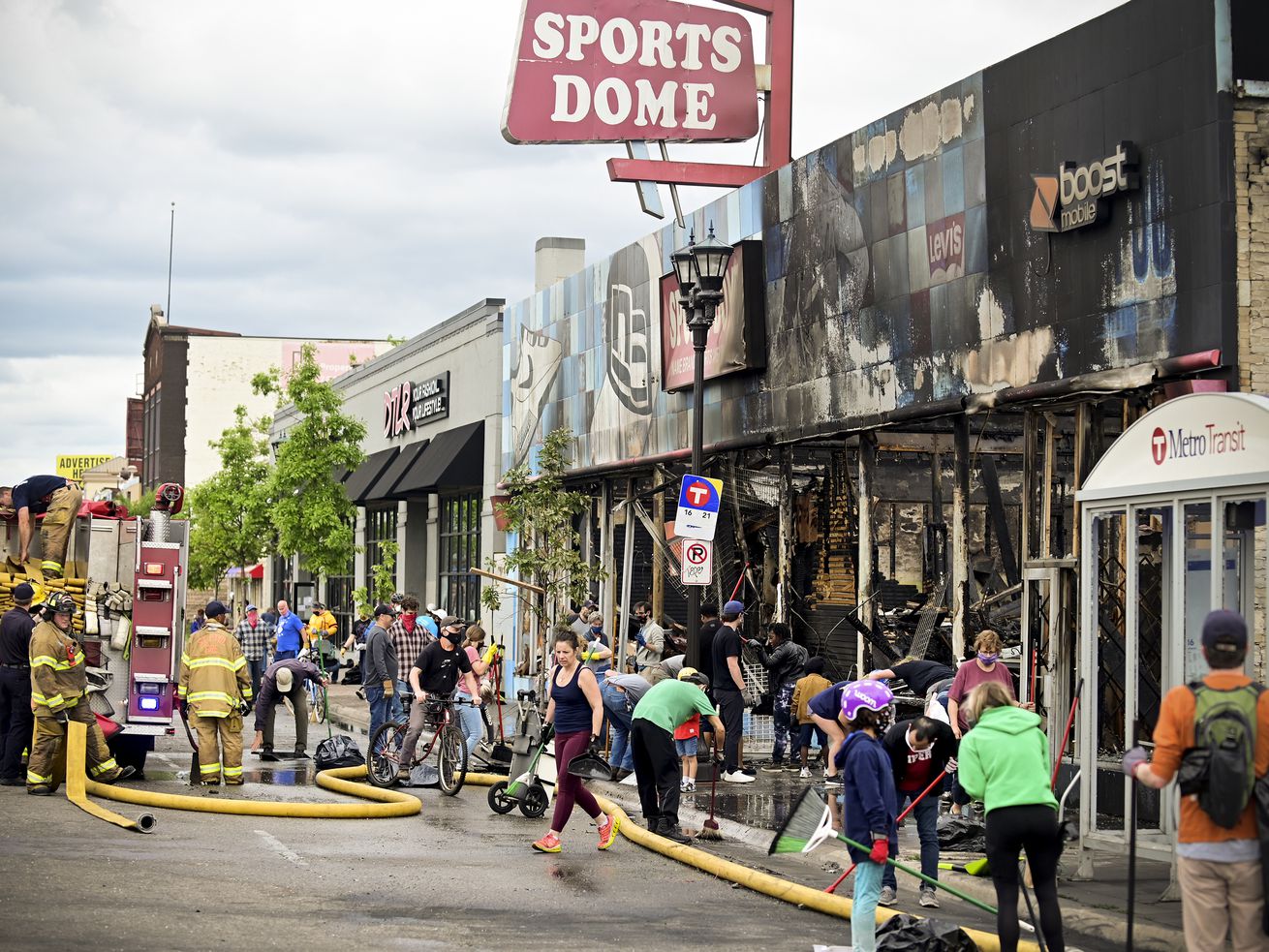 Volunteers began to clean up the sidewalks near burned-out businesses in St. Paul, Minnesota, on May 29. | John Autey/St. Paul Pioneer Press/Getty Images

Governors and mayors in states across the country where protests flared Friday night say a small number of demonstrators, and in some cases out-of-state agitators, are responsible for escalating the events with violence and property damage.

St. Paul Mayor Melvin Carter said every person who was arrested in the city Friday night was from out of state. “We don’t know these folks,” he said.

“Last night is a mockery of pretending this is about George Floyd’s death or inequities or historical traumas to communities of color,” said Minnesota Gov. Tim Walz on Saturday. He estimated as much as 80 percent of those destroying property in the cities aren’t locals.

St. Paul Mayor Melvin Carter: “Every single person we arrested last night, I’m told, was from out of state.” pic.twitter.com/VxvZ8ayZRF

The Star Tribune reported that officials made 40 arrests Friday night in the Twin Cities primarily for burglary, breaking curfew and destruction of property, and that the local jail log showed people booked from Illinois, Florida, Michigan, Missouri, and Alaska.

Other local reports put the number between 36 and 69 — and note their investigations into the matter do not support the assertions of local officials.

According to reporting by Theo Keith at Minneapolis’s Fox 9, 84 percent of those arrested had local addresses; Brandon Stahl of the city’s KARE 11 reports 86 percent of those arrested Friday night (and Saturday morning) were local. John Elder, a spokesperson for the Minneapolis police department, told both outlets his department has found that arrested people often give false addresses, and that preliminary investigations have revealed arrest records in other states for a number of those currently in custody.

Walz has promised the data analyzed by state officials to arrive at the conclusions shared during the conference will be made public — that set may be larger or categorized differently than that reviewed by Fox 9 and KARE, explaining the apparent discrepancy. It’s not yet clear whether this is the case.

Officials’ comments came as the state prepares to deploy the full Minnesota National Guard, which law enforcement has said would be the first time such action has been taken since World War II. Seven hundred soldiers had already been deployed in the cities and another 1,000 are expected.

Thousands of demonstrators have protested peacefully in the Twin Cities since Monday, when Floyd was killed by former police officer Derek Chauvin during an arrest in Minneapolis. Chauvin handcuffed and pinned Floyd down over reported suspicions Floyd passed a counterfeit $20 bill, which was recorded and shared widely on social media. Chauvin knelt on Floyd’s neck, holding him to the ground, as he struggled and yelled, “I can’t breathe.” Onlookers begged Chauvin and three other former officers on the scene to relent as Floyd became unresponsive and was later pronounced dead.

Protesters in Minneapolis and around the country have marched peacefully following Floyd’s death, chanting some of Floyd’s final words, “I can’t breathe,” and holding signs demanding an end to police brutality.

But in many cities, protests have devolved into violent clashes with police who have fired tear gas and rubber bullets at protesters, burning and breaking into buildings, and destroying police cars. A top public safety official in Minneapolis estimated Saturday that tens of thousands of people have been involved in the protests that have overwhelmed local police forces.

During large protests like those unfolding in Minneapolis, it’s not uncommon for actors with different agendas to take advantage of chaotic moments.

As Jason Johnson, a politics and journalism professor at Morgan State University, argued, anarchists and “opportunistic criminals” often take advantage of these moments to break into stores or sow chaos.

They are usually dwarfed by peaceful protesters who march to demand action against longstanding issues with racial bias from police and can be differentiated from people he described as “revolutionaries” who target places like police precincts and big-box stores that can be symbols of oppression. Fires can also be started by police, whose tear gas canisters can remain hot for hours after they’ve been launched, and who have thrown emergency flares.

The protests over Floyd’s death have once again sparked conversation over what is the right way to protest and what will actually cause change. However they proceed, protesters in Minneapolis and elsewhere will likely continue to take to the streets to express pent-up anger over long-term racial disparities in treatment from law enforcement as systemic problems persist.