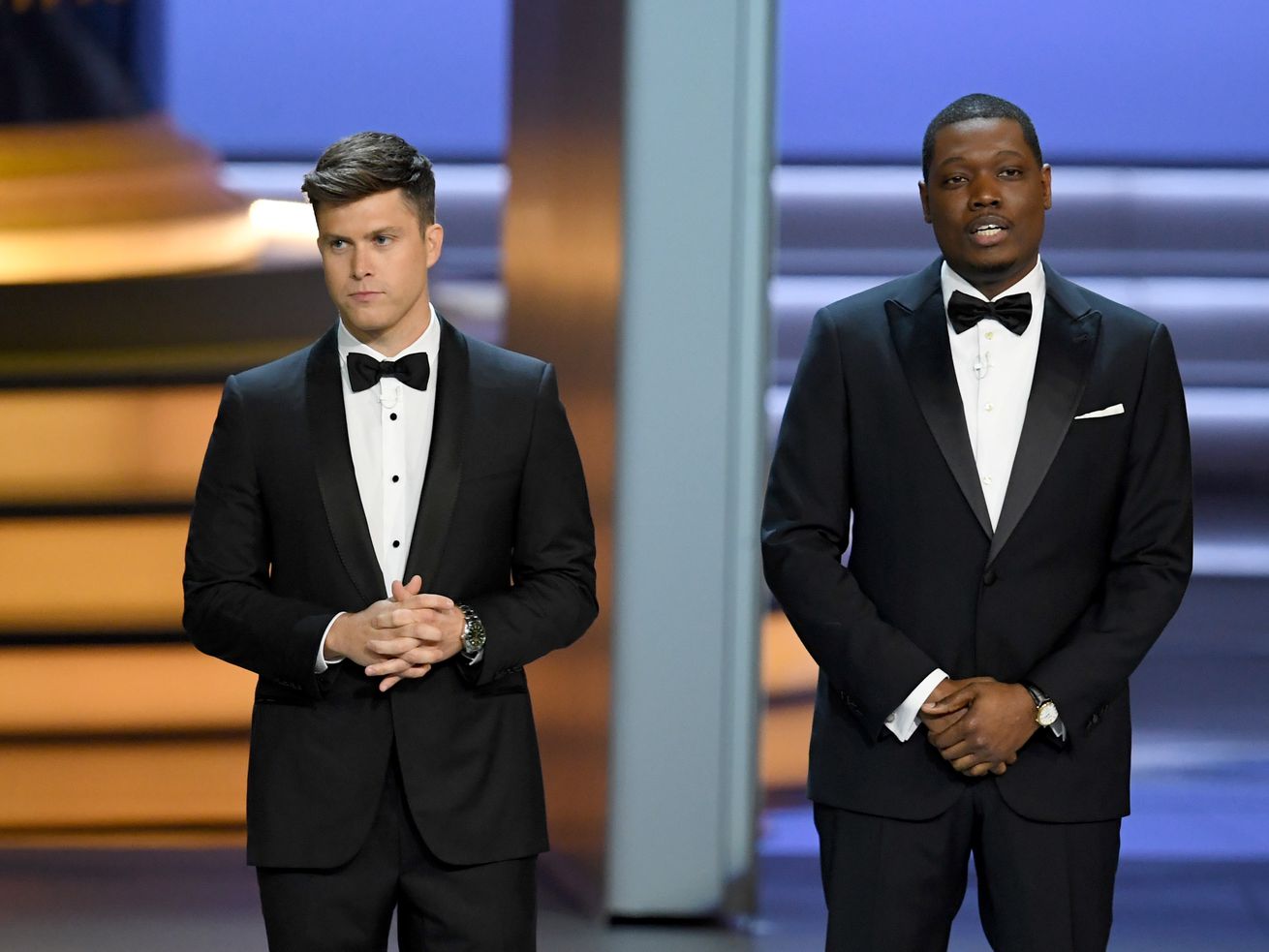 The audience reactions were the best part of the pair’s Emmys monologue.

After a lively opening number (featuring fellow NBC comedic stable members Kate McKinnon and Kenan Thompson) that only served to drive home what a strange choice they are as Emmy hosts, Michael Che and Colin Jost kicked things off with a comparatively stiff monologue that mostly scored lukewarm laughs.

Though their jokes tackled the expected timely topics — sexual harassment, Roseanne, representation — they were delivered with an offhand lightness that robbed them of their deserved weight, and thus dulled their comedic impact. Jost noted that the audience members were allowed to drink in their seats, joking about “losing inhibitions at a work function” before launching into quips about getting calls from Ronan Farrow (who wrote on the Harvey Weinstein allegations for the New Yorker as well as reporting on misconduct allegations against Les Moonves).

Che continued by saying that Roseanne Barr, recently fired from her own show for racist statements, had “had a rough year” — notably a sentiment last expressed (and walked back) by Norm Macdonald — and gave a sarcastic congratulations to Laurie Metcalf for her supporting actress nomination for the infamously canceled Roseanne revival. He and Jost also joked about the subject of that opening number, representation, calling out ER for having no Filipino nurses and guessing that one day there’d be an all-white reboot of Atlanta.

Though the reception in the Microsoft Auditorium seemed muted on the television feed, reaction shorts from the audience members helped give some life to the lackluster monologue, including Chrissy Teigen’s reluctance to play along and Brian Tyree Henry’s no-go reaction to the proposed Atlanta reboot.

@chrissyteigen is all of us. #Emmys pic.twitter.com/emRTR8tOaG

Brian Tyree Henry isn’t here for that @AtlantaFX remake that Michael Che cooked up during his #Emmys opening dialogue! pic.twitter.com/zbrhlwpeYj

Nonetheless, the monologue seemed to lose more air as it continued, lending a whiff of sympathy to Jimmy Kimmel’s entreaty to applaud as he presented the next award. (“Let’s have a hand for Michael and Colin, weren’t they great?”) At least we’ll always have that opening number.