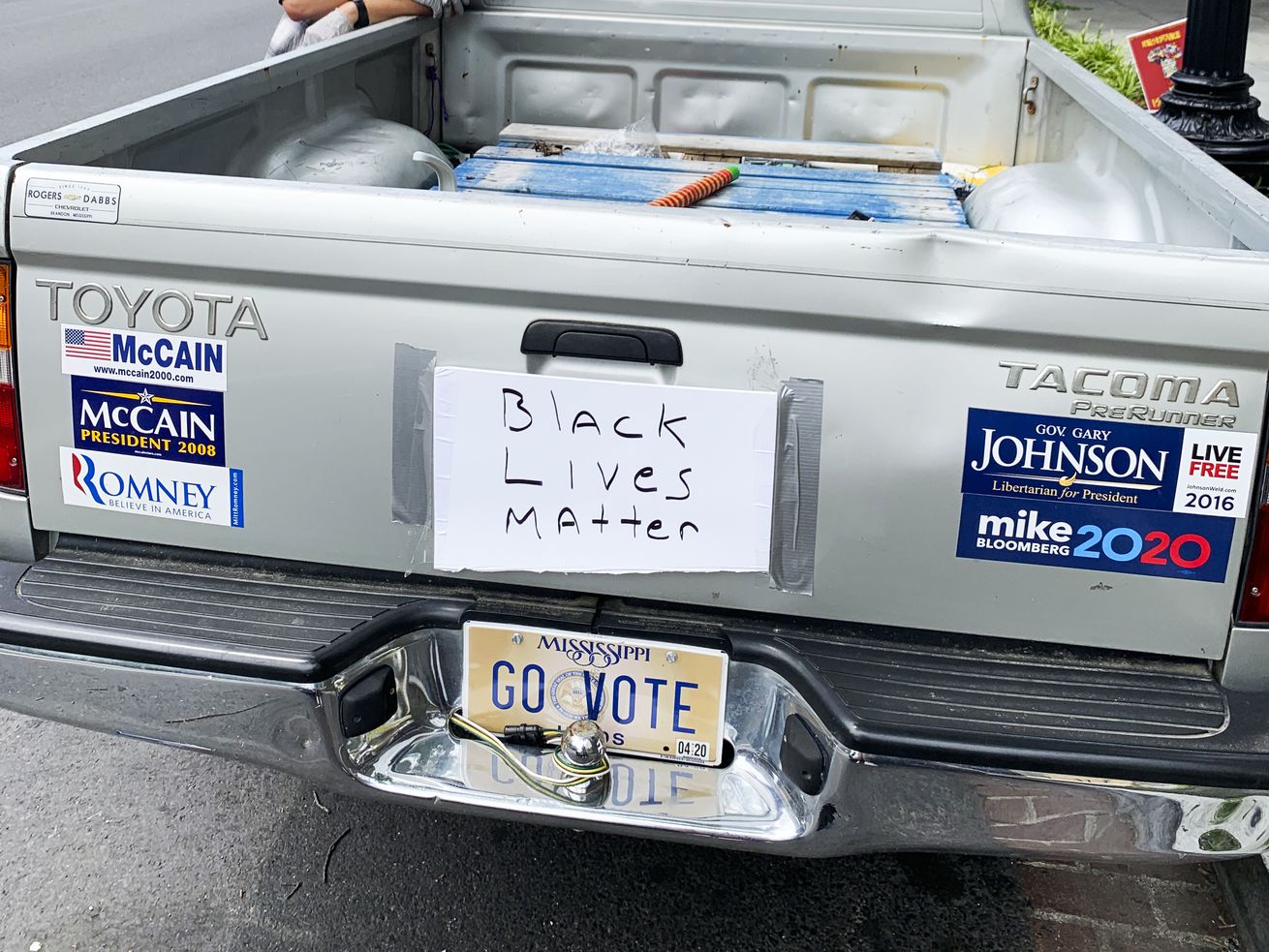 Nathan is a self-described “libertarian-leaning Republican” who says President Trump has been something of a breaking point. | Jane Coaston/Vox

“I have pretty much felt politically homeless since 2016.”

Last Tuesday, I tweeted out a photo of a truck parked in downtown Washington, DC, not far from the White House and the protests against police brutality and the killing of George Floyd that had engulfed the city.

It was the bumper stickers on the back of the Toyota Tacoma that made me do it. They showed what seemed to be a political evolution of sorts, mirroring one that many Americans may be having in 2020: from a 2000 sticker for John McCain’s failed presidential campaign to a sticker supporting Mitt Romney’s candidacy in 2012 to ones supportive of then-Libertarian Party candidate Gary Johnson in 2016 and former New York Mayor Michael Bloomberg in 2020.

And in the middle, a handwritten sign stating “Black Lives Matter.”

I had a lot of questions about this truck, some simple: Whose truck was it? Was the BLM-supportive sign real or just put there to fend off possible thieves? And some not so simple — how did this person get to this place? How did their politics change over time, and why? Or did they?

I got home before the curfew but I passed this truck near 14th street and if this is you, please contact me. pic.twitter.com/r1zKD9990v

This week, 26-year-old Nathan, the owner of the truck, gave me the answers.

Nathan is a Korean-American self-described “libertarian-leaning Republican” who has never been a fan of the two-party system. But President Donald Trump was something of a breaking point for him.

“I have pretty much felt politically homeless since 2016,” he told me. “It’s been fucking internal screaming for almost four years.”

He’s a Texas-born 2016 Virginia Military Institute graduate whose job search in Washington has been stymied by the coronavirus pandemic. He had never attended a street protest before last week, but he told me that being in Lafayette Park when Park Police used tear gas and rubber bullets against protesters “radicalized” him. “I just had to fucking show up after that,” he told me.

Now he’s attending anti-police brutality protests outside the White House every day. Wearing a hard hat emblazoned with quotes from Mahatma Gandhi and Mr. Rogers, he carries a broom and dustpan and tidies the streets as he walks, because he wanted his form of protest to be a “peaceful contribution.”

We spoke on Saturday before he headed back to the White House to protest. This interview has been edited for length and clarity. Nathan’s last name has been withheld to protect his privacy.

I moved around a lot. Virginia is the longest I’ve lived anywhere. My story: born in Plano, Texas, near Dallas, and I moved to Charlotte, North Carolina, [then] Seattle, Hong Kong, Denmark, the United Kingdom, the United Arab Emirates, and Vancouver, British Columbia.

I wanted to join the military. So I asked my parents to send me to a military high school to see if military college was something I could hack. I liked it. And then I went to the Virginia Military Institute. My life goal was to be an infantry officer, a cavalry scout officer, or an armor officer — so, like, a guy in a tank.

[I got a] medical disqualification and never got to serve. I worked for [a transport company] in Pennsylvania; life sucked, hated that. Quit that job, went to get my shit together in Oregon, worked in a restaurant. I was just cleaning dishes, cleaning tables. [At the time I thought,] “I got a degree from, I thought, a fairly reputable institution, now I’m doing this.” I needed a calling.

I was always a libertarian-leaning Republican, still consider myself a Republican fighting within [the party]. So the son of a bitch I voted for president in 2016 [former New Mexico Gov. Gary Johnson] decided to run for Senate. I was willing to just go for something that I thought had meaning. And that felt like that was doing something worth doing. I was willing to go for free and just live off my savings from [the transport company]. But I got hired by an organization called Young Americans for Liberty, went out, knocked on doors, made a positive impression. A few months later, they invited me back working full time.

I had a blast, went, “I’m going to try Congress.” I don’t think I’m gonna reveal who I worked for, but I ended up being on the Hill for a while [before I was] let go. And then two weeks later, coronavirus hit the US, and every job I applied for replied back with, “We are no longer hiring.” I did some side hustles online, managed to pay rent that way. And then this all happened.

Can we stand up and look at the back of your truck? I think a lot of folks were interested in that. So you mentioned [in our Twitter messages] that John McCain was one of your heroes.

I found an original Ross Perot sticker. I slapped on that one [on my old truck]. And that one was just me rebelling against a two-party system. I’m a guy who happened at that point to just vote Republican. But I’ll vote for a Democrat — you know, who gets in shouldn’t fucking matter. As far as I’m concerned, I’d like to see the destruction of the two-party system, frankly.

But I liked McCain, I liked his campaign against George Bush. W, you know, I didn’t put him up [on my truck]. I think in terms of a compassionate person, he definitely is. But as far as I’m concerned, I think he should have been impeached for the Iraq War and leading us into that.

And then Romney was your first vote.

Yeah. First vote in 2012. Him, [Paul] Ryan. Those were the kind of Republicans I really identified with.

[On Sunday, Sen. Mitt Romney marched in a protest in support of the Black Lives Matter movement. In a direct message, Nathan asked me to add “how extremely proud (he is) to see my man Mitt out today.”]

Bipartisanship is not a dirty word to me. [Former House Speaker John Boehner] didn’t do everything right. But I liked that he was willing to try to get that grand bargain with Obama. [Some of my colleagues have debated Boehner’s interest in bipartisanship.]

Then [there’s] 2016, when I was chairman of the College Republicans at VMI, and that’s like the most conservative school you could be at. And then the moment [Donald Trump] came down that escalator and talked about, you know, he’s sure some Mexican people are okay, I was like, “No, I’m not. I can’t.” I wasn’t going to vote for Trump. I couldn’t.

And we all know what happened. So [for 2020,] I made a custom “Joe Walsh, I guess, fine” sticker. I had that up for a while and he dropped out. Then there wasn’t a Republican primary. I couldn’t vote. I was like, I guess I can do [Joe] Biden. But for a while, I thought I was staring down the apocalyptic scenario for me and a lot of moderates, of Trump versus Bernie Sanders. And that was like my nightmare.

And that’s why you were supportive of Mike Bloomberg?

I mean, stop-and-frisk, you know, there’s plenty of shit I can say. I was trying to pick between shooting myself in the fucking head and shooting myself in the foot, and that was an obvious preference for me. And he [Bloomberg] had appeal; he’s a moderate and a centrist. And it looked like he was going to do it until Elizabeth Warren spanked him on live TV.

I have pretty much felt politically homeless since 2016. It’s been fucking internal screaming for almost four years.

Do you think that this protest has given you a chance to get some of that out or speak out in some way?

It feels nice to do something. I’d tell people that if you care about shit, just bitching on Facebook’s not going to change anything; go out there. I guess trying to film and getting footage was my toe into it.

But here I am now, [and] it’s odd. I mean, I’m still, I can vote for centrist Democrats, but I’m too right of center. I’m definitely not progressive, but, I mean, there’s always overlap. I’ve always thought that the militarization of police has been a bad idea. The drug war has been catastrophic, as far as I can see. I think if states want to legalize [drugs], that’s up to them. I wouldn’t do it, but I’d even say psychedelics should be legal now. But it was weird because when I was at VMI, to [Republicans], I was a libertarian and then I worked with libertarians, and to them I was a statist cuck. You probably get this if you’ve been paying attention to right-wing stuff, but every libertarian agrees on two things: that there’s only one libertarian and it’s them.

So what’s your plan for the rest of the day?

All I do is clean the streets; that’s it. That’s how I choose to protest. Trying to bring that energy. Like yesterday, I filled maybe three trash bags.

Everyone’s self-organized; it’s a beautiful thing. I’m not far out enough where the people are saying abolish the police, I’m not there, there’s a lot of places that [other protesters and I] don’t overlap, but I’ve always thought where there’s overlap, why fight it? Which I think they should do in Congress.

So what’s your plan after this, after these protests?

I’ve had five-year plans. They’ve all blown up in my face. I thought success at first was just chasing a fat paycheck. But I’ve found out that doing this stuff out here, interacting with people, the activist stuff, was super rewarding. This is rewarding, I’ve seen. [But] I’m going to start applying for work.