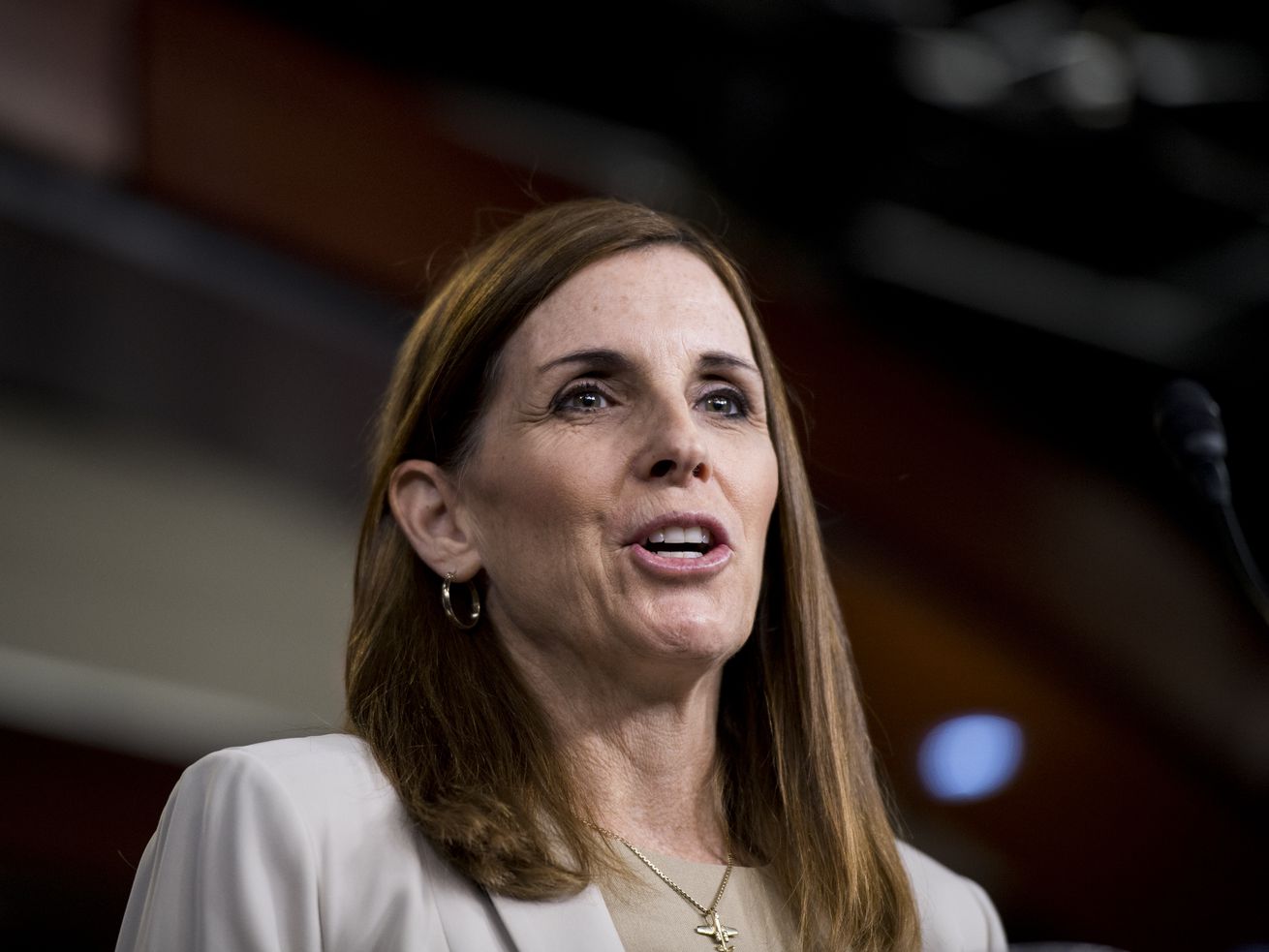 Rep. Martha McSally is poised to beat out two Trumpier options for the nomination.

PAULDEN, Arizona — In the final days leading up to the heated three-way Arizona Senate primary, one Republican candidate levied attacks against the now-late Sen. John McCain while another campaigned sounding a lot like him.

Rep. Martha McSally, the clear frontrunner for the nomination and the first female fighter pilot to fly in combat, debuted an ad last week reminiscent of McCain, who has been memorialized in the days after his recent death for his military service and pragmatic politics. In it, she didn’t mention any of her Republican rivals. Instead, she looked ahead to November.

“The world is a dangerous place,” McSally says in the ad. “We need strong leaders who understand the threat and respect our troops. [Democrat] Kyrsten Sinema fails the test.”

Meanwhile, Kelli Ward — who is running for the seat in the image of President Trump — took a decidedly different tack. “Are we going to elect a senator cut from the same cloth as Jeff Flake and John McCain?” Ward asked the crowd during one of her rallies on Friday, just hours after McCain’s office announced he would be stopping treatment for terminal brain cancer.

The two campaigns represent an identity crisis roiling the state Republican Party: Is it a party that sent Trump to the White House and punished Flake for sparring with him? Or are they ready to return home to the party establishment? A McSally win could mean they are.

Supporters of both Ward and former Sheriff Joe Arpaio, meanwhile, aren’t exactly on board. They argue that it’s time to oust so-called “RINOs” (Republicans in name only) from the state’s congressional delegation.

“McSally is McCain in a skirt. We need somebody [like Ward] who’s going to go to Washington for us and keep us from having to deal with the Washington swamp,” said Ward supporter and Prescott realtor Susan Cohen. “I love Trump’s agenda, and I think she will get behind it.”

This hostility from the Trump wing of the GOP is exactly what pushed Sen. Flake to step down from his seat, after early polling showed him losing to Ward in the primary. McSally, however, looks like she just might be able to withstand this onslaught.

According to a June poll by the Phoenix-based OH Predictive Insights, 40 percent of self-identified Trump Republicans see themselves backing McSally. Another August poll from the same firm shows McSally with 47 percent of overall Republican voter support, while Ward trails with 27 percent and Arpaio comes in a distant third with 13 percent. Given numerous races in which margins of victory have been much tighter than polls have anticipated, however, a McSally victory is far from assured.

In a year when establishment Republicans haven’t exactly seen a lot of success, Arizona is finally looking like it could be the place for a triumph.

Arpaio split the Ward vote, paving the way for a potential McSally victory

There’s no question that McSally is benefiting heavily from Arpaio’s entry into the race, which has split a base of support between Ward and the controversial former sheriff of Maricopa County. And while many Ward supporters agree with Arpaio’s hardline approach to issues like immigration (“We’ve loved Sheriff Joe for years,” one voter told me), they see his surprise decision to pursue the seat as a spoiler that detracts from her candidacy.

“It’s just simple mathematics,” says Brandon Tatum, a former Tucson police officer who’s campaigning with Ward. “I think [Arpaio] is splitting the vote, and I wish that if he understood his path at this point, he would drop out and let it be between McSally and Ward.”

They’re not wrong. Polling conducted right after Arpaio chose to enter the race in January showed a significant dip in Ward’s support — she briefly dropped to third after being in the lead. “The biggest loser from Arpaio joining the race was Kelli Ward. It took the biggest chunk of votes from her,” says Mike Noble, the head pollster at OH Predictive Insights, the firm that found 40 percent of Trump supporters are now backing McSally.

Arpaio’s candidacy has also hurt Ward’s ability to differentiate herself as the president’s biggest fan, since both have leaned heavily into their Trump bona fides.

Arpaio has emphasized that he’s been with Trump since the early days, while Ward has been described as initially backing Ted Cruz. “I will be with him until the end,” Arpaio said of Trump at a campaign stop in Tucson, noting that he would be a solid vote for the administration if elected to the Senate.

Some Republican voters in the state also view Ward as somewhat kooky — an image that was not helped by her decision to bring on Mike Cernovich, a noted conspiracy theorist and alt-right troll, as a campaign speaker. Critics note that she previously held a town hall to examine the chemtrails conspiracy theory, earning her the nickname “Chemtrail Kelli.”

“The kind of people who listen to Infowars and believe it would be on the Ward side of things,” says Kim Owens, a McSally supporter who had previously worked on the McCain presidential campaign.

The war between Arpaio and Ward has also gotten increasingly nasty, after two former Ward employees were hired by Arpaio earlier this summer. Since then, the vitriol on social media has culminated in the use of expletive-laced tweets and a leaked video of Ward rapping karaoke. “It’s getting very visceral,” says Noble. “It should be a reality TV show in the primary right now.”

And as much as Ward is the loser of Arpaio’s candidacy, McSally is the winner. “I’ve never been more happy in my life that Sheriff Joe is running for office again,” says Nathan Brown, a political consultant based in Tempe who backs McSally.

Is this the return of the establishment?

Elected Republicans across the country have been struggling to make it to higher office. In primary after primary, voters seem much more likely to choose outsider, business-minded candidates over members of the current class of the House of Representatives.

McSally could be the exception to this trend, largely because she’s seen as the only one who stands a chance against presumptive Democratic nominee Kyrsten Sinema in the general election. Sinema has had a surprisingly strong candidacy in the historically red state — something voters are clearly worried about.

Usually, the Senate race in Arizona can be “just a Republican race,” says Derrik Rochwalik, the chair of the Maricopa County Young Republicans. But this time, “it’s an actual race against a Democrat opponent and who’s going to be the likely one to beat them.”

Both national and local Republicans seem to think McSally is their best bet. “She is the obvious person,” says Owens. A RealClearPolitics average currently has Sinema up by 5 percentage points against McSally and almost 11 points against Ward.

“I think if it’s not Martha McSally, there’s no way forward,” Brown says. “I say that because Kyrsten Sinema is the most prolific fundraiser in the state of Arizona on the Democrats’ side, and Martha McSally can come close to matching it.”

The numbers do seem to show that McSally might be the only one who can keep up with Sinema’s fundraising prowess. According to Federal Election Commission filings that tracked fundraising through early August, McSally has secured $6.1 million in contributions this year, while Ward has taken in just over $3 million and Arpaio trails with $1.3 million. Sinema tops all of them with nearly $10 million.

While polling suggests that McSally will handily take the nomination on Tuesday, she will need Ward and Arpaio’s backers after she wins — and they’ll definitely take some convincing. Though Ward supporters told me they would vote for McSally if she wins the Republican primary (“Have to,” one shrugged), concerns about her record abound.

Part of this skepticism stems from McSally’s efforts to appear closer to Trump and his hardline approach to immigration. She’s removed her name from a bill that supported a path to citizenship for Deferred Action for Childhood Arrivals recipients and removed a video she had produced on the subject from public view, for example. Her opponents have seized on this back-and-forth, with Ward dubbing McSally a #FlipFlopBorderHawk for her somewhat blurry stance on a border wall.

“She’s been very inconsistent with illegal immigration,” says Rep. Paul Gosar, a member of the House Freedom Caucus who has endorsed Ward. “I’m tired of people pretending who they are.”

“Before the presidential election, she didn’t want Trump to win, and then after the election, and now in the primary, she kind of switched her views, so I don’t really respect that,” says Matt Lynch, a student backing Ward who lives in Gilbert. McSally had declined to support Trump in 2016, though she’s since sought to cultivate a friendlier relationship with the president.

Cat Barrett, a master teacher in Phoenix, said the ideal scenario would have been Ward’s appointment to McCain’s former seat, giving both Ward and McSally a win. As things stand, she thinks the practical option is McSally. “I would go with the money and McSally — who will bring a better fight to Sinema,” she said.

Voters will decide Tuesday if she gets to bring that fight.