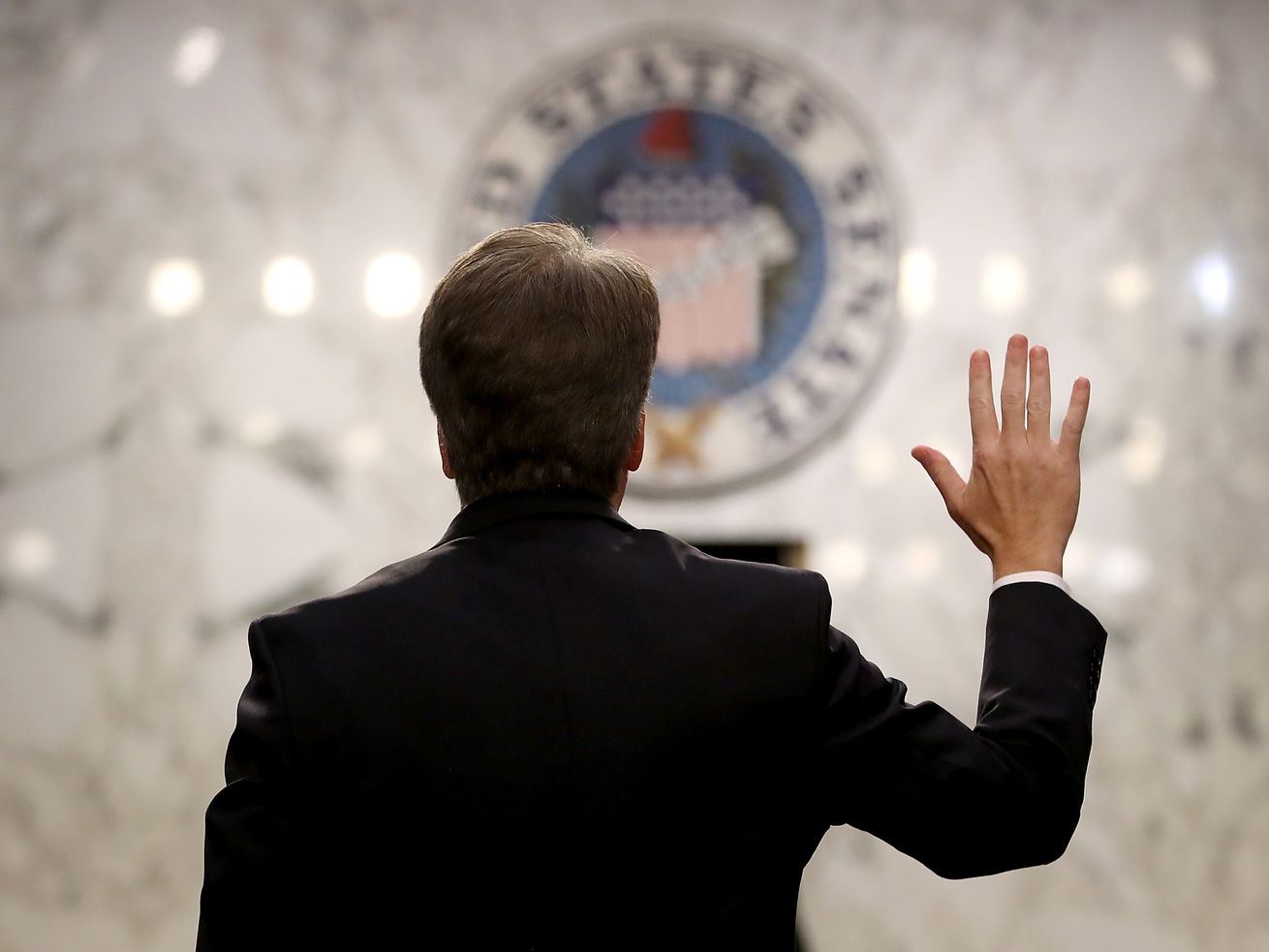 Christine Blasey Ford and Julie Swetnick have named Judge in their allegations about Kavanaugh.

The sexual assault accusation from Christine Blasey Ford that has upended Supreme Court nominee Brett Kavanaugh’s hearing isn’t just about Kavanaugh. It also mentions a friend of Kavanaugh’s who Ford says was in the room when the assault took place: Mark Judge. And his name keeps popping up, including in new allegations from Julie Swetnick, Michael Avenatti’s client and a Washington, DC, resident who alleges she witnessed Kavanaugh sexually harass and assault women in high school.

Ford, the first woman to come forward with allegations against Kavanaugh, describes Judge as watching Kavanaugh’s alleged assault of her, occasionally egging him on, and eventually jumping on top of her and Kavanaugh — a move that allowed her to escape. Swetnick says that Judge and Kavanaugh were present at a party where she was “gang raped” in the 1980s and that they and others targeted women with drugs and alcohol so that they would “lose their inhibitions.” She also describes Kavanaugh drinking excessively and sexually and verbally harassing women.

Kavanaugh has vehemently denied the allegations as “completely false” and said the allegations from Swetnick are “from the Twilight Zone.” Judge denied them to the Weekly Standard. (He declined to comment to the Washington Post for its article published last Sunday.) In a letter to the Senate Judiciary Committee last week, Judge said he had “no memory” of the alleged incident and did not see Kavanaugh act the way Ford describes. He also said he had no more information to offer and therefore did not wish to speak publicly to the committee about it, and he is reportedly now holed up in a beach house in Delaware.

Judge was a classmate of Kavanaugh’s at Georgetown Preparatory School in Maryland and is now a conservative writer who has written for publications such as the Daily Caller and the American Spectator.

He’s floated some controversial ideas in his writings — including asking in 2006 whether gay people are perverts and longing for the days when President George W. Bush could give his wife, Laura, a “loving but firm pat on the backside in public” as a show that he “knew who was boss.” He’s also the author of several books, including one recounting his teenage years of alcoholism and addiction.

He is now at the center of the brewing storm over Ford’s allegations that Kavanaugh sexually assaulted her while at a party during the early 1980s, when they were both in high school. The accusations could derail the confirmation of President Donald Trump’s second Supreme Court nomination, which Democrats have asked to be delayed, even as many Republicans and the White House seem determined to forge ahead.

Despite his desire to be kept out of the matter, Judge’s name keeps appearing elsewhere. On Sunday, before Swetnick’s allegations came out, the New Yorker published a story on a second woman who accuses Kavanaugh of sexual misconduct, Deborah Ramirez, which contained a tidbit from a former girlfriend of Judge’s, Elizabeth Rasor. She claims Judge once “told her ashamedly of an incident that involved him and other boys taking turns having sex with a drunk woman,” but that he deemed it consensual. A lawyer for Judge said he “categorically denies” that.

Swetnick’s claims also name Judge and are similar to what Rasor described in the New Yorker.

Ford alleges that sometime during the early 1980s, she was at a party when Kavanaugh and Judge, both drunk, corralled her into a bedroom. Ford says that while Judge watched, Kavanaugh “pinned her to a bed on her back and groped her over her clothes, grinding her body against hers and clumsily attempting to pull off her one-piece bathing suit and the clothing she wore over it,” according to an account written by Emma Brown at the Washington Post, who interviewed Ford.

When she tried to scream, Ford alleges that Kavanaugh put her hand over her mouth, and she was able to escape when Judge jumped on top of them and knocked them all down.

In the letter Ford sent to Sen. Dianne Feinstein (D-CA) in July outlining the incident, Judge’s name apparently appears, but in the public version of the letter, it’s redacted:

At one point when REDACTED jumped onto the bed the weight on me was substantial. The pile toppled, and the two scrapped with each other. After a few attempts to get away, I was able to take this opportune moment to get up and run across to a hallway bathroom.

Ford also wrote that she never saw Kavanaugh after the assault but did see Judge, who seemed “extremely uncomfortable” upon their meeting.

Judge told the Weekly Standard that he first learned he was named in Ford’s letter when Ronan Farrow from the New Yorker, who alongside Jane Mayer detailed the allegations against Kavanaugh without naming Ford in a report last week, told him. Judge has backed up Kavanaugh’s emphatic denial of the accusations.

The Weekly Standard asked Judge if he saw Kavanaugh engaged in any sort of “rough-housing” with a female student in high school, which he also denied. “I can’t. I can recall a lot of rough-housing with guys. It was an all-boys school, we would rough-house with each other,” he said. “I don’t remember any of that stuff going on with girls.”

Judge in his letter to the Judiciary Committee obtained by the Post said he “did not ask to be involved in this matter nor did anyone ask me to be involved.” He reiterated that he had no memory of the incident and said he did not want to testify publicly before the committee.

NEWS — Mark Judge in letter obtained by WaPo says “I have no memory of this alleged incident” and defends Kavanaugh pic.twitter.com/fsW0sY20YE

The Post located Judge this week staying at a friend’s beach house in Bethany Beach, Delaware. The publication reported that a car in the driveway “contained piles of clothing, a collection of Superman comics, and a package addressed to Judge at the Potomac home where he lived three years ago.”

An attorney for Judge told the Post she told him to leave the DC area last week because he was being “hounded” by the media and critics. “He needed for his own health to get out of this toxic environment and take care of himself,” the attorney, Barbara “Biz” VanGelder, said.

As Mother Jones reported, Judge’s 2005 book, God and Man at Georgetown Prep, “apparently paints the school as overrun with gay priests who promote a form of liberalism that wrecks Catholic education.” (The book is now out of print). And both that title and Judge’s 1997 memoir, Wasted: Takes of a Gen X Drunk, detail rampant alcohol abuse at the school, including his own.

In the book, according to Mother Jones’s Stephanie Mencimer, Judge writes that he reached a point where once he had one beer, “I found it impossible to stop until I was completely annihilated.” He writes that the school made students do community service on Sundays in an effort to try to keep them from drinking too much the night before.

Judge refers to Georgetown Prep as “Loyola Prep” and, according to Mother Jones, also changes the names of the people in the book — but he wasn’t too sneaky about it, apparently, because there’s a “Bart O’Kavanaugh” in the book who seems quite likely to be Brett Kavanaugh:

So Bart O’Kavanaugh’s witness is a sketchy perv who confirms they were drunken losers in high school pic.twitter.com/s1GVaJK6xW

This paints a rather different picture than the one Kavanaugh did when his nomination was announced. “The motto of my Jesuit high school was, ‘Men for others,’” Kavanaugh said when speaking from the East Room of the White House. “I have tried to live that creed.”

Judge has written in the past about rape, feminism, and body language

While Judge has currently entered the limelight because of his ties to Kavanaugh, he’s been a part of conservative media circles for quite some time. He’s written for the Daily Caller and the American Spectator and has floated a number of controversial assertions and ideas, including when it comes to women. Since coming under scrutiny in light of Ford’s allegations, Judge has deleted much of his social media presence.

“You’re thinking it even if you don’t say it: Are gay people perverts?” he wrote in a 2006 piece titled “Gay Sex” on the website PoliticalMavens.com. In 2012 for the Daily Caller, he wrote that the “odds were very high” that a black person has stolen his bike. Other writings attributed to Judge on the Daily Caller include “The angry ladies of Jezebel,” “Miley Cyrus and American malaise,” and “Sex and Duck Dynasty: the liberal double standard.”

Feminist author Jessica Valenti pointed out on Twitter that in 2013 for the Daily Caller, Judge wrote that President George W. Bush’s interactions with his wife, first lady Laura Bush, showed “the man knew who was boss.” She also highlighted another instance where Judge’s writings suggested women are “sending out signals” with how they dress and act.

Mark Judge, Kavanaugh’s high school friend who was in the room when Christine Ford says she was assaulted has some pretty telling views on masculinity https://t.co/gqjWCwdCC3 pic.twitter.com/vyMAOXnOrt

Another one from Mark Judge where twice in one paragraph he writes that women shouldn’t be raped, BUT… https://t.co/djV22uwXcM pic.twitter.com/T8n1lydfin

“Of course there is never any excuse to rape someone,” Judge wrote in a post called “Feminism and Body Language: A Double Standard.” “But it’s possible to have two seemingly contradictory thoughts to be both equally true.”

There’s never any excuse to rape, a crime that I think is almost akin to murder because the rapist kills a part of the human soul. And yet what women wear and their body language also send signals about their sexuality. If a woman at her computer in Starbucks is, as Jarune Uwajaren argues, sending out several signals simply by the way she is sitting, then women who dress like prostitutes are also sending out signals. The signal is not that they should be raped. But if a posture while drinking coffee is indicative of the soul and personality within, than so is marching down the street in your underwear. The former says that you are not interested in conversation or love. The latter says you can’t articulate an argument without using your body for cheap theatrics.

He also publicly wondered where all the “manly” journalists have gone.

Heavy.com unearthed some of Judge’s now vanished social media posts, one of which shares a fiction post he wrote for Liberty Island magazine.

“Just got a bit of a jolt from a high school buddy who just called me,” he wrote on Facebook when he shared the post. “This is (mostly) fiction, bro. Nothing to worry about.”