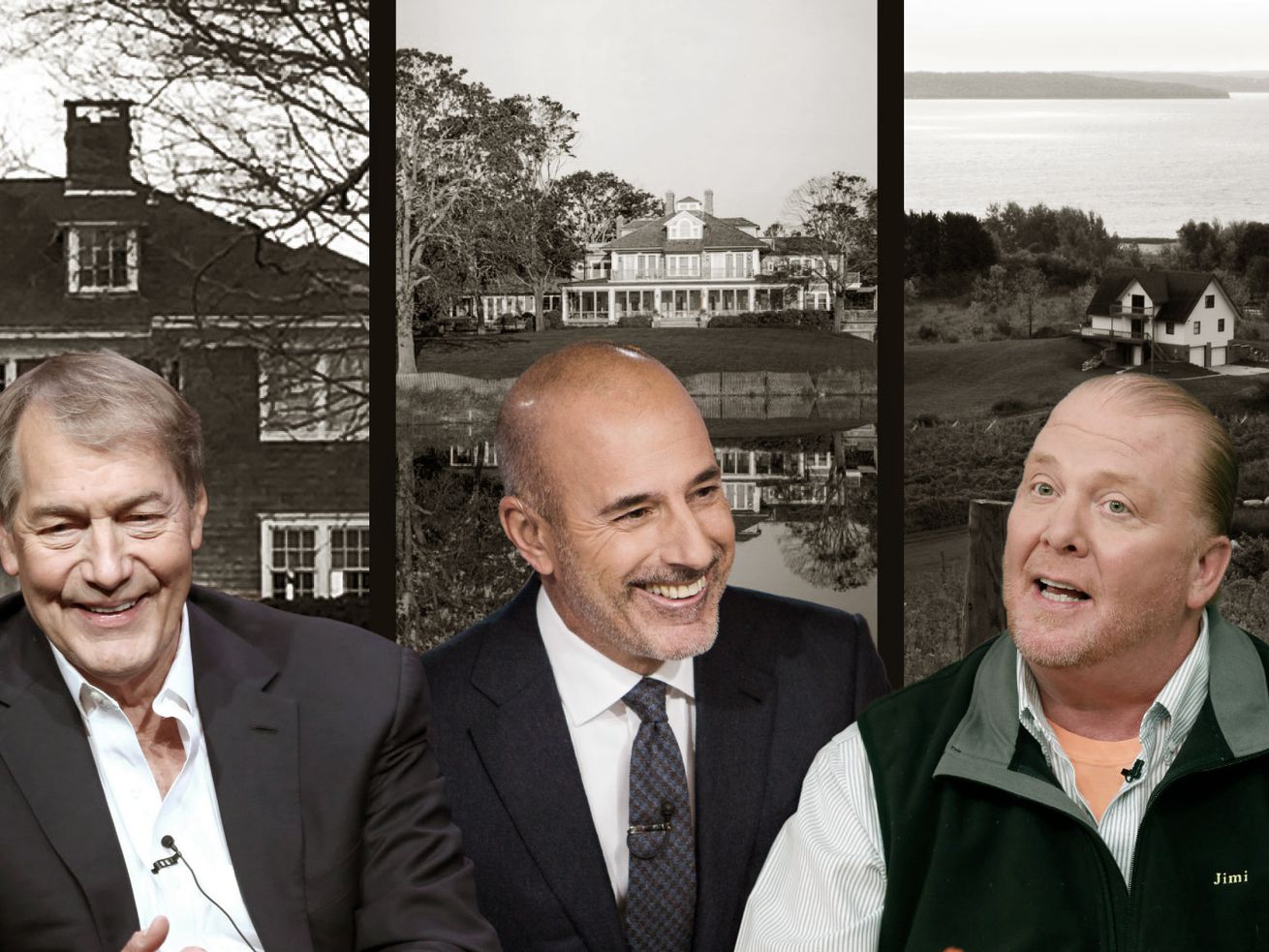 Celebrities accused of sexual misconduct aren’t being “ruined” by accusers.

He’s the latest high-profile man to reemerge after less than a year locked up in #MeToo jail — the place wealthy and powerful men go to hide out while the storm blows over. Critics of the #MeToo movement compare it to death.

Charlie Rose, of course, still exists. He’s been living in his waterfront home since the world learned that he liked to walk around with an open bathrobe in front of the women who worked for him. He’s reportedly been in initial talks to get back into TV.

The great fear among #MeToo skeptics — that men will be unfairly ruined for their own behavior — is not coming true. The time in exile endured by men who are credibly accused of wrongdoing is spent in lavish digs, it’s short, and it’s all the penance some of their supporters believe they deserve. Many of them have already been released.

Abusers are making a comeback

Bill O’Reilly, who racked up tens of millions of dollars in settlements with women (including one for $32 million), is in talks to return to cable news.

Back in 2016, he was spotted eating breakfast in town with Matt Lauer, who also went on to serve time in #MeToo jail after women accused of him appalling behavior at NBC. One woman said Lauer would lock the door to his office by hitting a button under his desk so no one could come in during these incidents. (NBC claims the button is not as bad as it sounds.)

Lauer, too, appears to be inching his way back into New York life after he was ousted from NBC when eight women accused him of years of harassment and serious abuse.

Four months after Mario Batali apologized for decades of sexual misconduct, he started taking meetings in New York to figure out a comeback. (Since attempting a comeback, things have gotten worse for Batali. The Boston Police are investigating him.)

#MeToo jail is not jail

Wealthy men have been fired and exiled. But to call it serious punishment is a stretch.

C.K. lost his deal with FX. Lauer and Rose were fired. O’Reilly hung on until reporters found out that Fox News knew about a $32 million check he cut to a woman who accused him of harassment. They all laid low, pretty much taking the greatest vacation none of the rest of us will ever be able to afford.

O’Reilly escaped to his mansion in Montauk, nestled among nature preserves and overlooking a bluff. O’Reilly bulldozed a historic cottage when he bought the property in 2014, to the dismay of his neighbors. According to the New York Daily News, he hired the developer Farrell Building Co., known for its McMansions, to replace it.

Lauer, meanwhile, said after he was caught and fired that “repairing the damage will take a lot of time and soul-searching and I’m committed to beginning that effort. It is now my full-time job.”

Lauer, apparently, defines “a lot of time” as four months, doing his soul-searching at one of his compounds in the Hamptons:

Lauer bought the 14,000-square-foot property from Richard Gere for $33 million in 2016. His #MeToo prison cell overlooks the Peconic Bay and includes 12 bedrooms and 12 bathrooms, a 60-foot heated swimming pool, a private 240-foot dock, and an “island-inspired” teahouse, whatever that means.

Charlie Rose skipped town last year after he was accused of walking around naked or with a bathrobe open in front of his underlings for decades.

“Ceases to exist,” as Diller said to Dowd, means that Rose isn’t spending as much time glad-handing in Manhattan restaurants. Instead, he’s retreated to his “sanctuary,” a large house outside New York City, in a town called Bellport on Long Island. He enjoys panoramic views of the water from his house and can see Fire Island in the distance.

James Cury wrote for the Hollywood Reporter that Rose has made “occasional, mostly disastrous forays into Manhattan.”

There’s a pantomime that plays out in many of these situations. Credible accusations come to light. The accused says something vaguely apologetic. But they do not really take any kind of responsibility. In fact, they will try their best to squelch the stories in the first place. Several have even hired the same lawyer.

Even Harvey Weinstein pleaded for “a second chance” 10 days after the New Yorker and the New York Times dropped damning reports detailing accusations that the Hollywood mogul carried out decades of abuse, including rape. “I’m hanging in. I’m trying my best,” Weinstein said to a TMZ reporter on video. “I’m not doing okay, but I’m trying. I gotta get help. We all make mistakes. Second chance, I hope.”

When forgiveness didn’t materialize in a week and a half, Weinstein retreated to the desert, taking a trip to a luxury Arizona rehab facility where he spent $58,000 on a 45-day sex addiction treatment plan. He didn’t complete the program, which had stringent requirements like waking up sort of early to meditate. The facility, called the Meadows, offers patients a swimming pool and beautiful views. (Kevin Spacey also paid the Meadows a visit for sex addiction after 15 accusers came forward with accounts of abuse and assault by the actor.)

In November, Croc-wearing celebrity chef Mario Batali apologized directly for how he’s treated women for decades. “My behavior was wrong and there are no excuses. I take full responsibility,” Batali wrote in an email newsletter message. But he also included a recipe for cinnamon rolls, which pretty much negated the whole thing.

He was seen walking around Manhattan 10 days after the accusations surfaced. Since then, it’s hard to say exactly where he’s spent his time. He considered flying to Rwanda and Greece to help refugees (no word on that). He considered a move to the Amalfi Coast, the New York Times reports. Then there’s speculation that he went to his Michigan retreat, a waterfront home overlooking the Grand Traverse Bay. Batali reportedly spends his summers there making pizza in his outdoor wood-fired oven.

They want us to believe they paid their debt

These high-profile bad actors want us to believe they did real time. Many of their allies say their sentences are as bad as it gets. “Peoples lives are being shattered and destroyed by a mere allegation,” President Trump wrote in a supportive note on Twitter, referring to staffer Rob Porter, who lost his job in the White House when credible accusations that he abused both of his ex-wives and a former girlfriend became public.

But the fact is, losing a job and relying on money, accumulated power, and powerful friends to continue to live in luxury while plotting your return is not the same as real jail.

For example, unlike Lauer or Rose’s #MeToo jail, in real jail, there are no ocean views:

And in general, you stay imprisoned much longer. In New York, for example, if you’re, theoretically, convicted of a sex crime, you could face up to 25 years in prison. One instance of a misdemeanor offense, like unwanted grabbing or pinching, could land you in jail for up to a year.

And you don’t get to decide to slip out of prison to eat at a nice restaurant or take a walk through New York City.

But unlike in criminal cases, where a rubric is supposed to be applied to behavior to determine the punishment, we’ve looked at these cases as unique examples. Each man’s behavior is assessed on the specifics of his situation and the question of whether it merits him being fired.

We ended up here in large part because of the role the media played in starting this long-overdue national conversation. #MeToo emerged alongside investigative reporting that outed individual men. The media did its job. Reporters gave us stories that exposed and humanized a rampant problem.

But the media isn’t designed to execute large-scale changes to tackle systemic problems. That’s the big question about what’s next for the #MeToo movement. As my colleague Anna North writes, “Talk of comebacks at this early date risks replicating one of the flaws critics saw in earlier phases of the #MeToo conversation: an excessive focus on individual men to the exclusion of the systemic factors that allowed them to harass colleagues with impunity.”

Until we start to rely on regulators, the legal system, and even employers to see the issue of sexual harassment as a serious, deeply rooted, and structural problem that requires significant change, we’ll continue to find ourselves gawking at individual men. It’ll be those few powerful men and their allies who’ll get to define what the punishment for these offenses should be. They’ll call it exile. They’ll call it banishment. They’ll try to claim #MeToo jail is enough.

It won’t come close to real jail. And it won’t solve the problem.