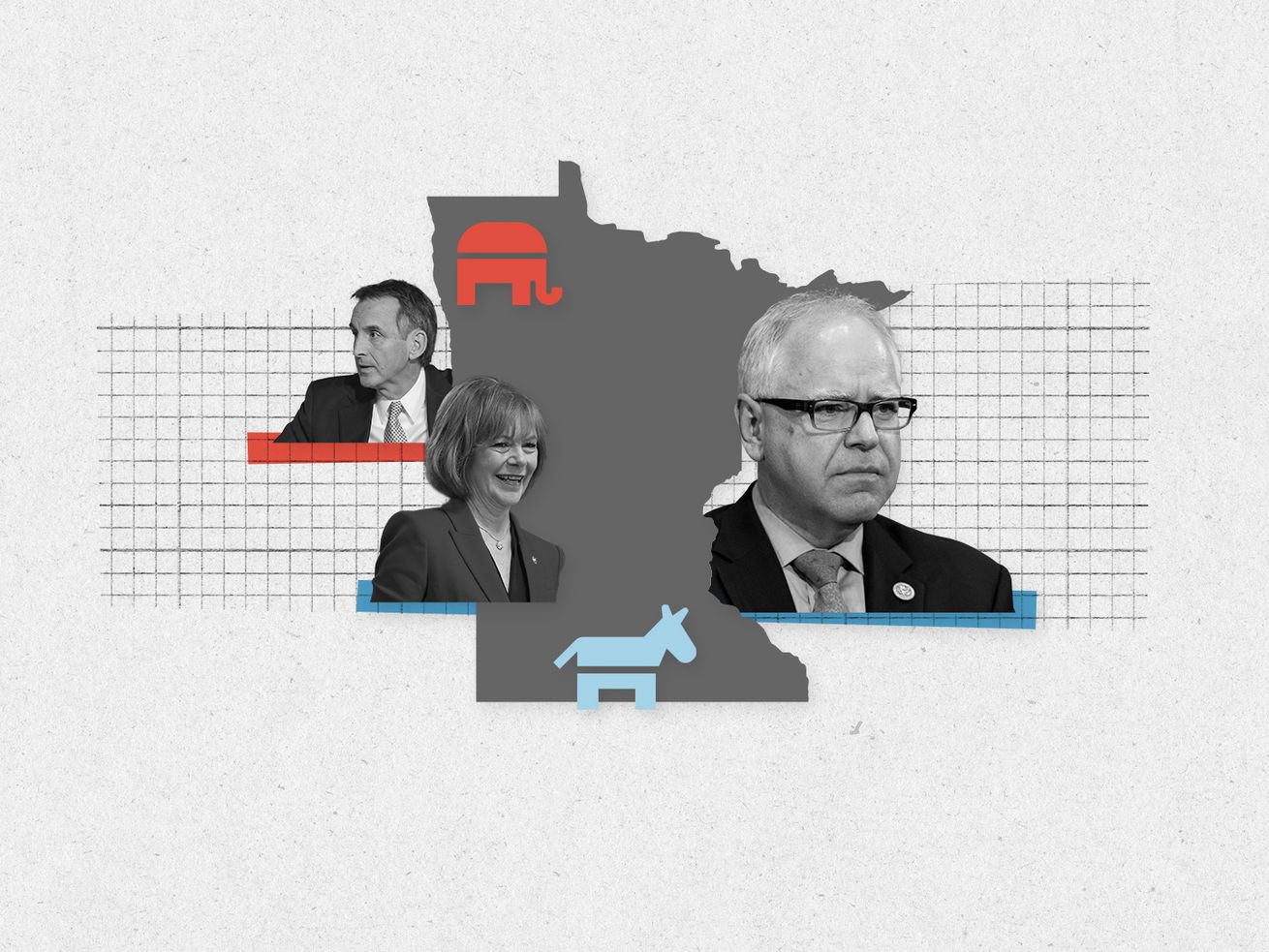 Key races for governor, Senate, and House are on the ballot in Tuesday’s primaries.

Voters are heading to the polls on Tuesday for unusually dramatic Minnesota primary elections. Two major Democratic candidates in statewide campaigns — Lori Swanson for governor and Keith Ellison for attorney general — have serious allegations hanging over their races.

Beyond the governor’s and attorney general’s race, there are competitive fields in the primaries for US Senate and House. Newly appointed Sen. Tina Smith (D-MN) is running her first race, but also is facing a primary challenge.

With a handful of competitive congressional seats, the state could also be critical in the battle for control of the House in the 2018 midterm elections. Two longtime Democratic Congress members in more conservative districts are running for governor and lieutenant governor, leaving open seats that give Republicans a few of their only chances to win House districts from Democrats. But Democrats also have openings to pick up a few seats, in their quest for a House majority.

Minnesota Gov. Mark Dayton is retiring, and there’s a sizable field of candidates lining up to replace him. On the Democratic side, there’s a competitive three-way race between US Rep. Tim Walz, state Rep. Erin Murphy, and state Attorney General Lori Swanson.

Walz represents a more conservative part of the state in Congress, and is being forced to reckon with his past stance on guns — one that had earned him an A rating from the National Rifle Association. Swanson is also facing allegations she had staff in the attorney general’s office do political work for her.

On the Republican side, the race is on between former Gov. Tim Pawlenty and former state Rep. Jeff Johnson, who ran for governor unsuccessfully in 2014.

On the Republican side, Pawlenty has more name recognition and campaign cash than Johnson, reflected in his 19-point polling lead in the NBC News/Marist poll. But the former govenror also has some vulnerabilities; notably, his establishment ties (he’s worked as a lobbyist after leaving the governor’s mansion in 2011) and his disavowal of President Trump, which could hurt him with Trump voters in the state.

As for the general election — the nonpartisan Cook Political Report rates this a toss-up, but the NBC poll found Pawlenty trailing all three Democratic contenders.

The polling so far looks good for Smith and Housley. As for the general election, this race looks to be comfortably in Democratic territory. Cook rates it Likely Democratic. Smith has kept her head down and voted with the Democratic caucus as a freshman senator, and she was already popular in the state before being appointed.

Smith has a 9-point lead in a hypothetical matchup with Housley, according to the latest polling average from RealClearPolitics.

Update: Keith Ellison has been declared the winner of the Minnesota Attorney General Democratic primary.

There’s a crowded, five-person race for attorney general on the Democratic side. The attorney general race is usually sleepy, but this one has been shaken up by allegations that Democratic candidate and US Rep. Keith Ellison (D-MN) abused his ex-girlfriend.

There aren’t many available polls for this race, but the state has only elected a single Republican attorney general since 1955 … so it seems safe to say the eventual Democratic candidate is favored to win.

The big question mark in this race is Ellison, the first Muslim elected to Congress and a progressive firebrand. He’s is easily the most recognizable name in the pack of Democrats, but he could be in trouble in light of new abuse allegations. This weekend, the son of Ellison’s ex-girlfriend wrote a lengthy Facebook post saying that Ellison had abused the woman. The claims have not been independently verified, and Ellison has denied mistreating her.

Iraq War veteran and Obama administration official Dan Feehan is running to replace Tim Walz, who is running for governor. He has widespread support from the state and national party.

The first congressional district is a fairly conservative region of the state that Walz has been able to get re-elected in partially because of his moderate stances. Now that he’s departing, it’s not a given that Democrats can replicate his success.

Feehan has the imprimatur of the Democratic Congressional Campaign Committee. He’s running as moderate — in favor of protecting the Affordable Care Act, the state’s farmers, and the military. Hagedorn and Nelson are both running on conservative platforms and embracing Donald Trump.

Update: Ilhan Omar has been declared the winner of the Minnesota First Democratic primary election.

In the race to replace Ellison in this safely Democratic seat, progressive candidate Ilhan Omar sticks out: She could be one of the first Muslim women elected to Congress.

Longtime Democratic Rep. Collin Peterson (in office since 1991) is again facing a challenge from Republicans. Two are vying to compete against him in November: Air Force veteran David Hughes versus National Guard veteran and entrepreneur Matt Prosch.

This district is the strange amalgamation: rated R+12 and yet still in Cook’s Likely Democratic category. That’s because Collin Peterson has been in the House for a really, really long time.

He was first elected in 1990 and is the longest-serving House member in the Minnesota delegation. Peterson has a record to reflect that; he’s a friend to farmers in a rural district dominated by agriculture and tends to vote more conservative. Hughes already ran against Peterson in 2016 and lost by 5 points.

Democratic Rep. Rick Nolan is vacating his seat to run for lieutenant governor, opening up a large field of candidates for this seat.

On the GOP side, St. Louis County Commissioner Pete Stauber and Duluth school board member Harry Welty are facing off.

The Eighth Congressional District leans conservative. Now that Nolan is leaving, Republicans see a prime opportunity to win back control of a district Cook rates R+4.

There’s a large field of Democrats running to be the nominee, and there isn’t a clear frontrunner so far. The state party hasn’t yet endorsed a candidate, although Metsa is leading the race in campaign cash. Stauber, the GOP frontrunner and a well-known local politician, has out-fundraised all the Democrats so far.