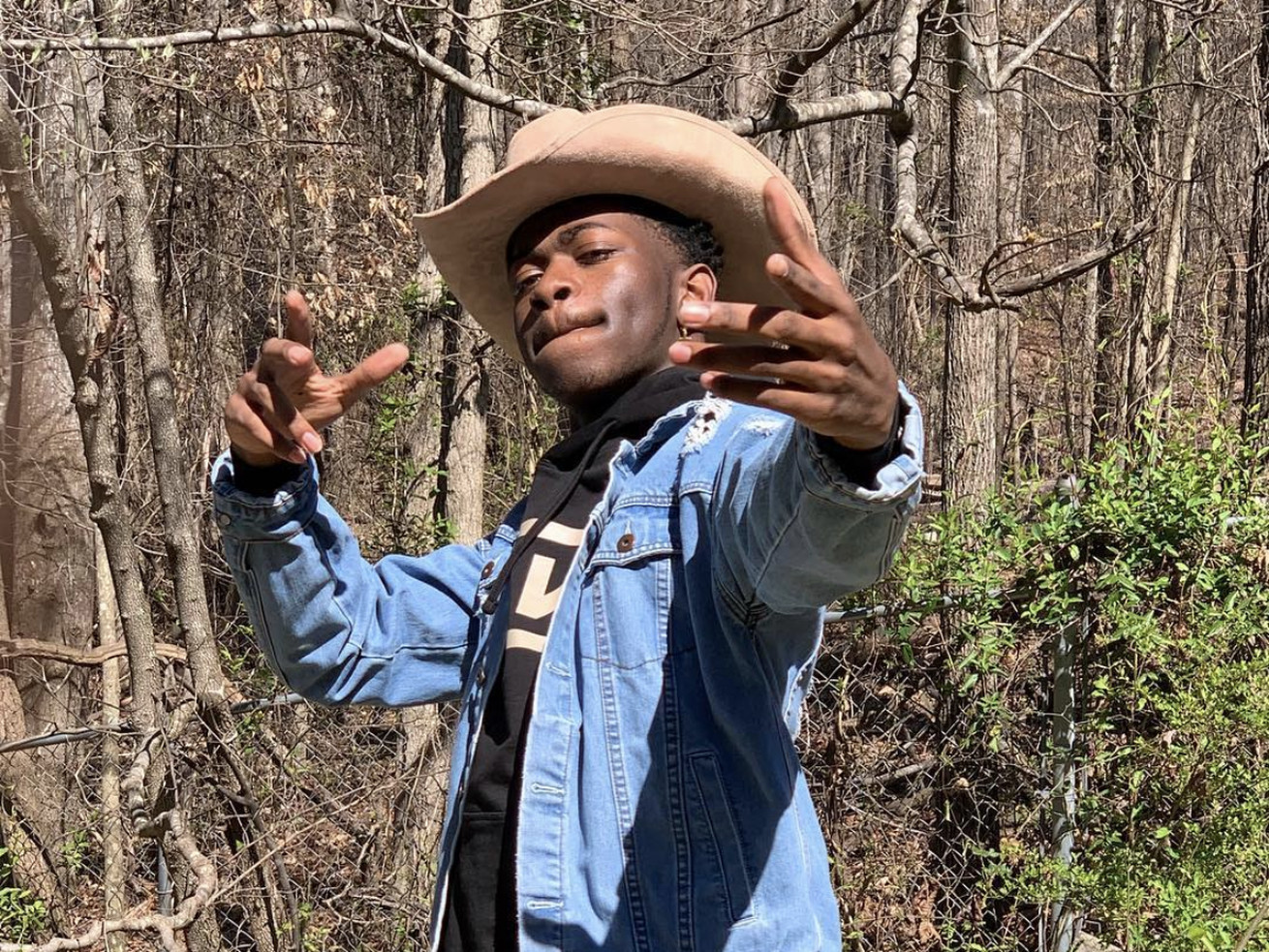 The fantastic viral crossover hit is challenging what country music sounds, and looks, like.

“I’m gonna take my horse to the old town road / I’m gonna ride ’til I can’t no more,” begins Lil Nas X’s “Old Town Road,” a twangy ode to the cowboy life that’s racked up millions of listens, a TikTok challenge, and famous fans since its December 2018 release. Critics have dubbed the song “a country-adjacent hip-hop mish-mash”; it’s a cross-genre hit that culls as much from trap music as it does modern, pop-skewing country. That combination arguably propelled its initial success, while ultimately igniting fierce debates about genre conventions and country music traditionalism, after controversy arose over where it belongs on the Billboard charts.

Now, Lil Nas X has released a remix of the song featuring country music veteran Billy Ray Cyrus, the “Achy Breaky Heart” bard (and father of Miley), doubling down on his argument that “Old Town Road” is a banger of a country song, one that should end up on all your Spotify playlists for the foreseeable future.

Rolling Stone first announced the collaboration, which began streaming at midnight on April 5. Cyrus does little to reinvent the song, which was hardly more than two minutes long in the first place. Like the original song, the “Old Town Road” remix is still all about Lil Nas X’s daily adventures in “bull ridin’ and boobies” with his “horses in the back.” But Billy Ray offers his own spin on the simple country life, contributing a laid-back verse: “Got no stress / I been through all that / I’m like a Marlboro Man / I can kick on back,” he sings.

The remix — and Cyrus’s involvement in it — is the latest development in a conversation that has made Lil Nas X a poster child for questions about gatekeeping in country music. While the multi-hyphenate (he’s a rapper, a singer, and a very good Twitter user) has an undeniable hit on this hands with “Old Town Road,” Billboard recently removed his track from its Hot Country Songs chart, kicking off an intense debate about what kinds of songs — and what kinds of musicians — truly should be there.

Is “Old Town Road” a country song or a rap song? Depends whom you ask.

“Old Town Road” debuted in the 19th spot on the March 16 edition of Billboard’s Hot Country Songs chart. But the following week, it was gone — having switched over to the Hot Rap Songs chart, where it entered at No. 24.

“Upon further review, it was determined that ‘Old Town Road’ by Lil Nas X does not currently merit inclusion on Billboard‘s country charts,” a Billboard representative told Rolling Stone, which reported on the reclassification on March 26. “When determining genres, a few factors are examined, but first and foremost is musical composition. While ‘Old Town Road’ incorporates references to country and cowboy imagery, it does not embrace enough elements of today’s country music to chart in its current version.”

The backlash was immediate, as many people criticized Billboard for feeding rigid ideas about who or what qualifies as country enough and argued that Lil Nas X’s race played a part in the song’s reclassification. Namely, the fact that Lil Nas X is a black teenager from Atlanta and country is a predominantly white genre did not go unnoticed.

While black artists have played a major part in its history, country music has long been criticized as unfriendly to artists of color. Former Hootie and the Blowfish frontman Darius Rucker, who is now a successful solo country artist, has spoken in the past about how some country traditionalists see him, a black man, as an interloper.

“Hate mail has been a part of my life. That’s just the way it is,” he told the Wall Street Journal in a 2014 interview. “People don’t want me singing country music. But I’ve never wanted to let anybody tell me what I can do.”

Additionally, like any other genre of music, country has changed over time. Today, the line between pop and country is often blurred, and elements of rap and hip-hop are common in country songs. Opinions vary on whether these changes count as an evolution or a dilution of the genre — but many hit songs of the past decade reveal how complicated “country” can be to define.

The 2017 single “Meant to Be,” by pop singer Bebe Rexha and featuring country mainstays Florida Georgia Line, topped the Hot Country Songs chart for a record-breaking 50 weeks; the song received a Grammy nomination for Best Country Duo/Group Performance earlier this year. Prior to that, a remix of Florida Georgia Line’s 2012 hit “Cruise” that featured the rapper Nelly found wild success; it charted on both the country chart and the Billboard Hot 100 and went on to become the most downloaded country song ever.

In 2014, Jason Aldean spent 10 weeks at the top of the Hot Country Songs chart with “Dirt Road Anthem,” a country-rap song that Ludacris later endorsed. And country-pop singers like Sam Hunt have been honored by the Country Music Awards for songs that drum up comparisons to Drake (although not without backlash from traditionalists).

“Country rap” and other crossover genres are dominant, and the numbers show it. Country singer Meghan Linsey highlighted this sentiment in the wake of Lil Nas X’s removal from Billboard’s country chart:

“That is some BS,” she tweeted. “[‘Old Town Road’]’s got plenty of ‘country elements’ and its as ‘country’ as anything on country radio, tbh.” And future collaborator Billy Ray Cyrus quoted the song in support after the news broke, implying that it was being unfairly scrutinized because it was different.

“Don’t try and think inside the box. Don’t think outside the box. Think like there is no box.” #HorsesInTheBack

Lil Nas X has helped stoke the defense of his song as country; his initial response to being removed from the Billboard country chart was to post on Instagram that he was “extremely disappointed.”

“I believe whenever you’re trying something new, it’s always going to get some kind of bad reception,” he told Time in an interview about the controversy. “For example, when rap started, or when rock and roll began.”

“Old Town Road” is no more country than The Beastie Boys’ “High Plains Drifter.” Including Wild West signifiers or references to horses in no way qualifies a rap song with a trap beat as country. Furthermore, Lil Nas X is not professing to be a country artist. He’s not signed to a country label, and has no affiliation to the country industry whatsoever. Lil Nas X has no ties to the greater Nashville music campus in any capacity. There are no country artists guesting on the track like you had with Bebe Rexha’s collaboration with Florida Georgia Line’s “Meant To Be.” There appears to be absolutely no credible reason to include this song on a country chart aside from a bigoted stereotype bred from the fact that horses and cowboy hats are referenced in the lyrics.

Additionally, some have interpreted the song’s centrality to the “Yeehaw Challenge” on TikTok, where people have been dressing in cowboy hats and boots while lip-syncing to the song, as proof that “Old Town Road” is little more than a meme.

“I think he caught lightning in a bottle with ‘Old Town Road,’ and is at risk of getting lost in the next wave of rappers who are ready to enjoy a quick hit,” Billboard writer Bianca Gracie said. “As much as the song is fun, it’s still a bit gimmicky.”

Lil Nas X argues otherwise: “just because old town road has funny lines doesn’t mean it’s parody,” he tweeted shortly after that Billboard piece ran. “it has a theme. anybody with ears can tell i put some kind of effort into that song.”

Meanwhile, “Old Town Road” is bigger than ever. Chart Data reports that the song hit No. 1 on Apple Music’s global chart the same week Billboard rejected it; it has been streamed 1.46 million times on Spotify, holding the top spot on that service. The official music video, set to imagery from Rockstar Games’ cowboy-Western Red Dead Redemption 2 now has 23 million views. (The much simpler video for the remix, bolstered by Cyrus’s appearance and the swelling dialogue prior to its release, is approaching 1 million views.) On iTunes, the remix is No. 2 on the sales chart. (Apple Music already called the single “iconic.”) And Twitter seems to love this latest jam, no matter what Billboard or country purists may think.