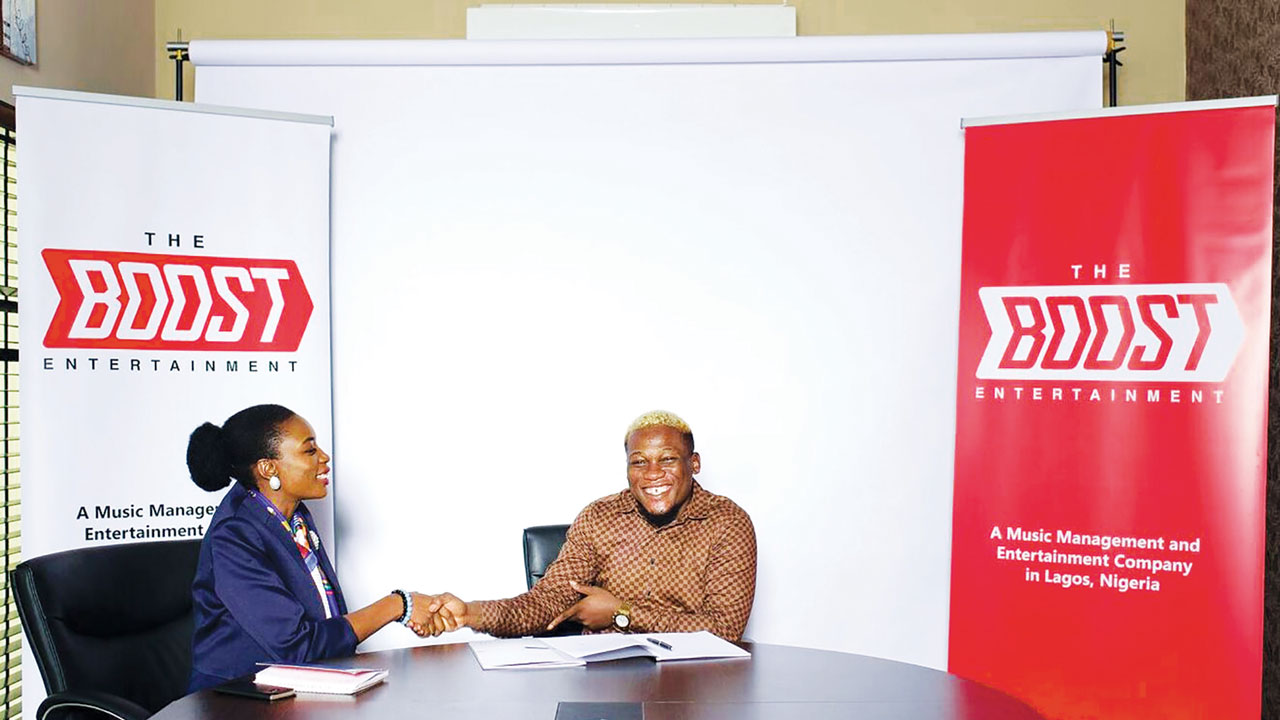 The Boost Management Legal Counsel, Sandra Oke and Kay Jay at the signing ceremony in Lagos

Songwriter singer, Victor Ogbonna well known by his stage name Kay Jay Ogbonna has signed a multi million-naira management deal with The Boost Entertainment. According to details of the deal, the entertainment outfit will be handling all his management affairs and bookings.

With hit songs such as Sell Over featuring Skales and Omo Akin with production imprint from Kenny Wonder, and Work and Pray featuring Shaydee, produced by Blaq Jerzee), Kay Jay is set to release a new single in November this year, also produced by BlaqJerzee.

The singer, who has been nominated for the Nigerian Entertainment Awards 2018 Fresh Vibes of The Year category alongside Davido’s World Music artiste Peruzzi, is the new kid on the block to watch out for.

Speaking on the deal, Kay Jay said he opted to pen a deal with The Boost Entertainment because the outfit shares his ideology and vision. “I see them making me one of the biggest artists in Nigeria and beyond. Despite being newly established, it is one of the first and few music management companies in Nigeria that fund the artiste, and I feel that is how it should be. It gave me even more assurance to work with them.

“They are not just bringing funds, strategy and ideas; they are bringing full hands on involvement and direction, with a unique attention to visual content creation. This is the structure that new and upcoming young artistes require to launch and succeed.”

According to him the problem of many upcoming artistes is always how to finance and promote their music. he added that The Boost Entertainment comes handy as they provide all the support required by any artiste to achieve his or her goals and dreams.

Managing Director of the outfit, Kiki Melissa said the firm was established with a mission to catapult noteworthy artistes to greater heights by providing all the fundamental support that they require to initiate, expand, and progress.

She added that fate had its way when it crossed paths with Kay Jay while in search for music talents. “As already mentioned by the artiste, one of the highlights of meeting Kay Jay was a mutually shared vision and approach, which led to an instant synergy and flow. With this official signing of Kay Jay our first artist, we plan to activate and create a new SI unit for music content management and creative business positioning. We at The Boost Entertainment believe that strategy and business direction with the right goals are the key structures in building a 360 music powerhouse,” she said.