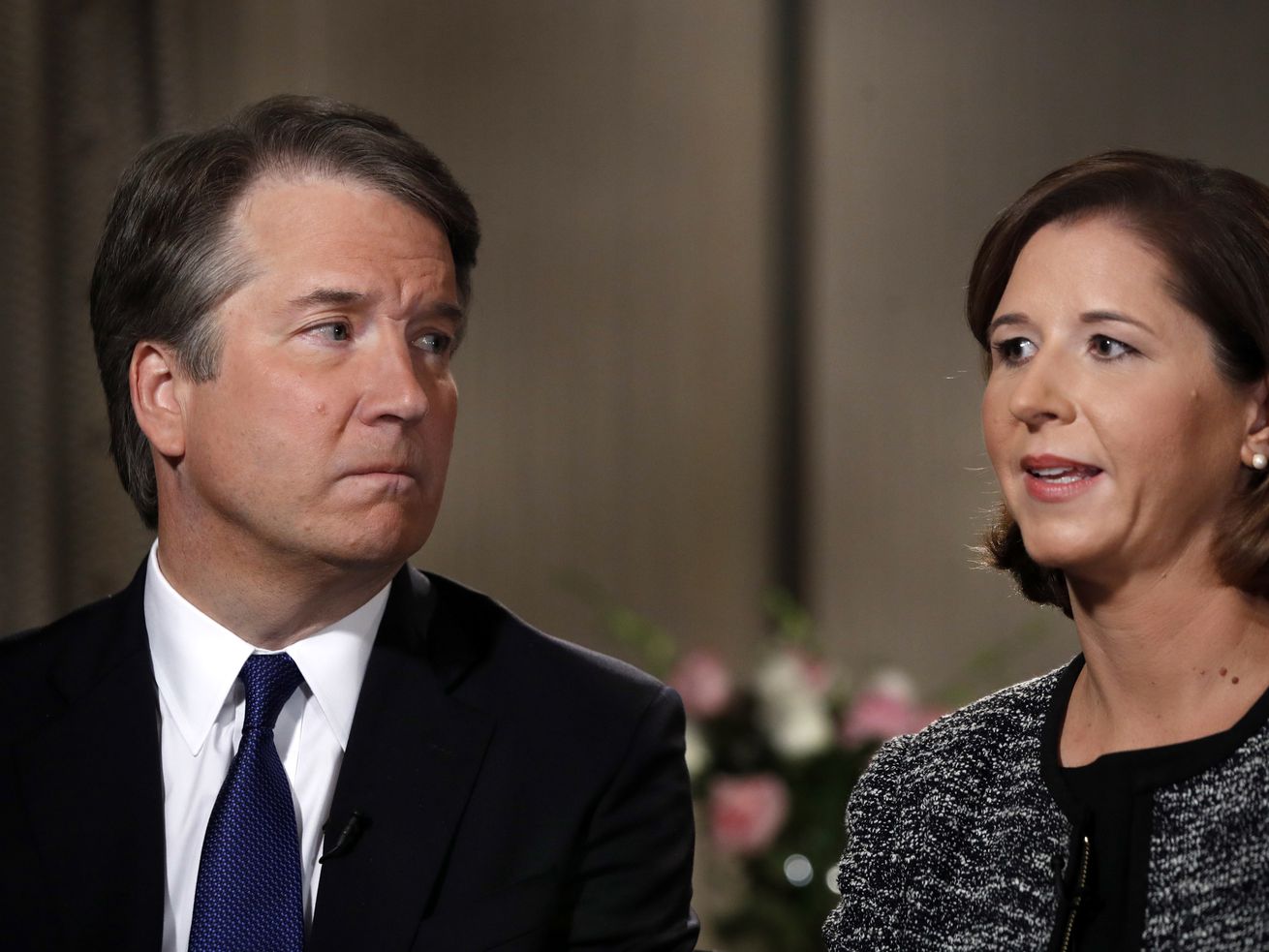 Supreme Court nominee Brett Kavanaugh had one main message for viewers in his interview with Fox News’s Martha MacCallum on Monday: He didn’t do it.

Kavanaugh and his wife, Ashley Estes Kavanaugh, spoke with MacCallum in the first press appearance he’s made since two women have brought allegations of sexual misconduct against him. Kavanaugh has unequivocally denied all allegations and continued to do so during the interview.

“I’ve never sexually assaulted anyone in high school or otherwise,” Kavanaugh said countless times within the first 15 minutes. It’s a pattern that continued throughout the course of the interview, with several rote phrases invoked.

“I’m just asking for a fair process where I can be heard where I can defend my integrity,” he said repeatedly. “I’ve always treated women with dignity and respect.” We looked at several key phrases he returned to throughout the interview and what each of them signal as Kavanaugh strives to defend himself.

“I’ve never sexually assaulted anyone in high school or otherwise”

Again and again, Kavanaugh returned to this defense as MacCallum confronted him with accusations from Christine Blasey Ford — who said he forced himself on her in high school — and Deborah Ramirez — who said he exposed himself to her while they were in college. It’s a hardline denial he’s been repeating since Ford first came forward, and it’s one that we’ll likely hear many times during the hearing this Thursday.

As Vox’s Andrew Prokop has pointed out, making repeated and vehement denials is a move right out of Trump’s own playbook for responding to claims of sexual misconduct.

In the MacCallum interview, Kavanaugh also pointed to his own testimony with Senate Judiciary Committee staff during a phone call that took place last week, when he also unequivocally denied these allegations. “Under penalty of felony, I denied this categorically,” he said. He noted that three other individuals whom Ford has said were at the party where the alleged assault took place have not been able to corroborate her story.

Although Kavanaugh said he believed that Ford was telling the truth about experiencing a traumatic incident of sexual assault, he reiterated that he was not the one involved. The idea that she may be “mistaken” or “mixed up” is one that’s been floated repeatedly by Republicans who argue that they believe her, but just think she could be confused about the perpetrator. Lawmakers have already used the same argument to push back against Ramirez as well.

This emphasis on the false nature of the allegations is a thread that continued after Kavanaugh was asked about accusations teased by attorney Michael Avenatti, who’s said that he has “credible information” that Kavanaugh and his classmate Mark Judge targeted women with drugs and alcohol so that they could be gang-raped.

MacCallum offered Kavanaugh numerous opportunities to criticize Ford and Ramirez, to speculate on their motives, or to express anger at his own situation, but he never took the bait. Instead, he fell back, time and again, on the phrase, “I’m just asking for a fair process.”

Many of his repeated statements were well crafted for the current #MeToo moment, but this one felt particularly strategic. While polls show the Republican base doubts Ford’s account, Kavanaugh’s approval ratings with the American people at large are the lowest of any nominee in decades and have fallen since Ford came forward. Kavanaugh and his team may have guessed that in the #MeToo era, it wouldn’t look good for him to directly challenge Ford’s account. A far better idea, from a public relations standpoint: invoking “due process.”

Critics of the #MeToo movement have frequently argued that depriving men of powerful jobs after sexual misconduct allegations is a violation of due process — even though the right to due process applies to trials, not employment. While Americans have a constitutional right not to be deprived of liberty without due process, no one has a constitutional right to serve on the Supreme Court. But by invoking “due process,” Kavanaugh was giving ammunition to those who think #MeToo goes too far.

Fairness also came up a lot in the interview — Kavanaugh called for a fair process several times, and at other points said, “America is about fairness, and hearing from both sides.” Such statements allowed him to insinuate that he was being treated unfairly without directly saying so, and risking looking bitter or resentful.

Asking over and over for a “fair process” gave Kavanaugh a response to MacCallum’s more probing questions so bland it was almost meaningless — and yet one that has a specific meaning for critics of #MeToo. He was able to avoid saying anything to outright offend supporters of the movement, while at the same time giving its opponents something to cheer for.

“If I had done that, it would have been the talk of campus”

Kavanaugh took an interesting approach in his response to Ramirez’s allegations, specifically. Ramirez has said that she was at a drunken dorm party as a freshman at Yale where Kavanaugh “exposed himself … thrust his penis in her face, and caused her to touch it without her consent as she pushed him away,” according to a report by the New Yorker.

In an attempt to cast doubt on the fact that this incident happened, Kavanaugh emphasized that if he had done it, “it would have been the talk of campus.”

What’s odd about this approach is that this incident was the talk of campus. As the New Yorker’s Jane Mayer — one of the reporters behind the explosive Sunday story — told NBC News, it was actually Yale alumni emails about the incident that first began generating a furor around it over the summer. That chatter eventually reached Congress and the media, she says.

“What happened was, the classmates at Yale were talking to each other about it, they were emailing about it. We’ve seen the emails, back in July before Christine Blasey Ford came forward, and eventually word of it spread. It spread to the Senate. It spread to the media. And we [the New Yorker] reached out to her,” Mayer said in her interview.

In his first confirmation hearings and since, Kavanaugh has touted his positive relationships with women, as well as his promotion of women as clerks in his office. “There’s a pipeline problem,” Kavanaugh said during a hearing, in describing how he was recruiting more women for clerkship opportunities. “As I’ve said, I’m breaking through that problem.”

Shortly after rumblings began to emerge about sexual misconduct allegations against Kavanaugh, a group of 65 women who attended high school with him signed onto a letter attesting to the decency of his character.

Kavanaugh referenced the women who’ve supported him through his schooling and this process again in both the Monday interview and a letter that he’s sent to the Judiciary Committee. “Women from every phase of my life have come forward to attest to my character. I am grateful to them. I owe it to them, and to my family, to defend my integrity and my name,” Kavanaugh wrote.

His frequent references to these women, as part of the interview and throughout this confirmation process, appeared intended to signal that he could be perceived as an ally to women. It’s a tactic that’s been used time and time again in cases related to sexual assault accusations even as it obscures the impact of the alleged acts on the specific women speaking out.

“I was focused on academics and athletics, going to church”

Kavanaugh also sought to downplay what’s been described as a raucous drinking culture at Georgetown Prep, an all-boys private high school he attended. He seemingly aimed to counter this narrative in the Fox News interview with examples of a “wholesome” upbringing.

In both Ford and Ramirez’s allegations, Kavanaugh was described as heavily intoxicated and his drinking was mentioned by others as a factor that significantly affected his behavior. While speaking with MacCallum, Kavanaugh strove to paint a different picture.

“I was focused on academics and athletics, going to church every Sunday at Little Flower, working on my service projects, and friendship,” he said.

Kavanaugh also described being a virgin in high school and said he remained that way for “many years thereafter.”