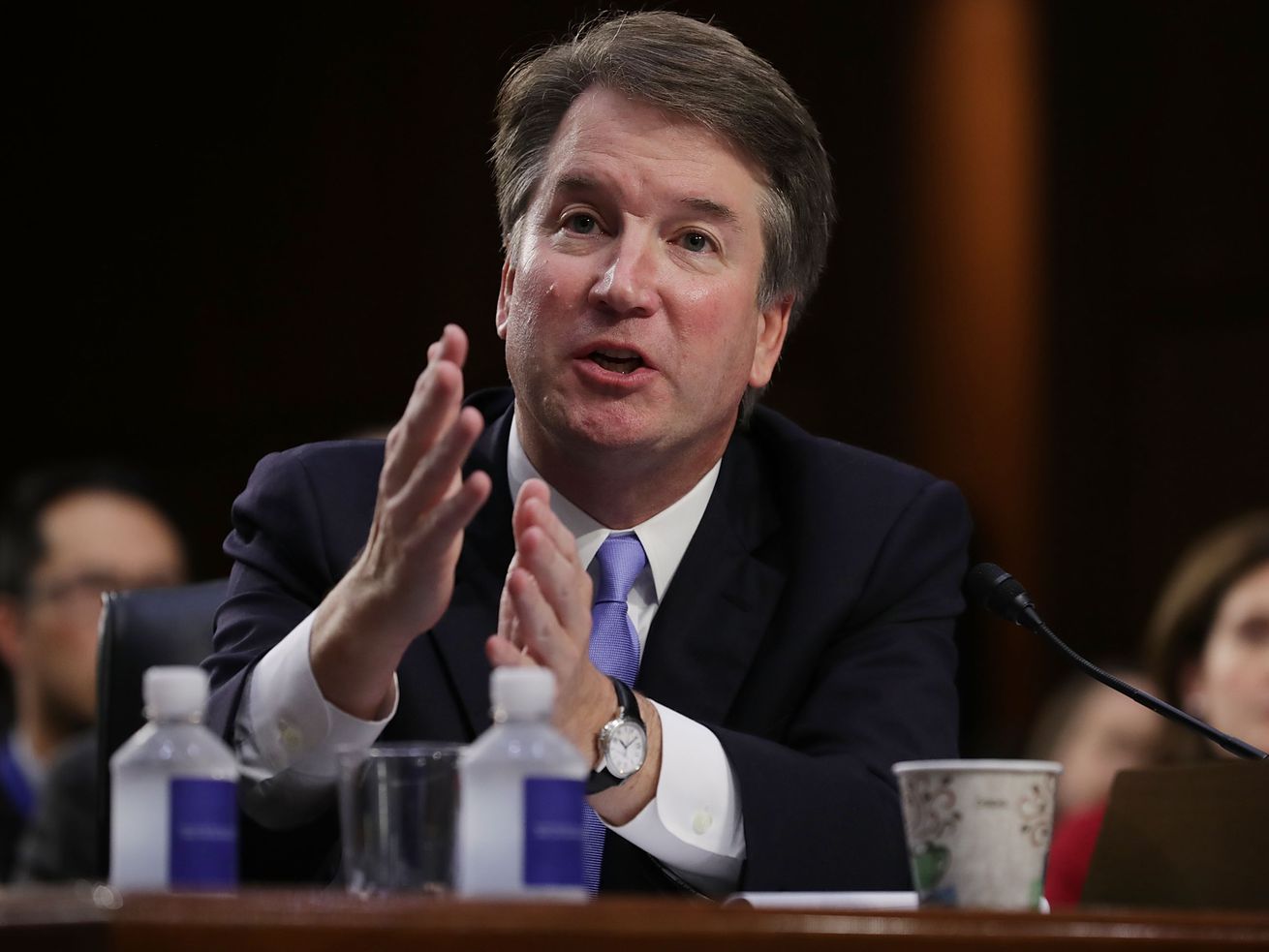 It’s not clear whether he actually thinks birth control causes abortion. Here’s what is clear.

For reproductive rights advocates, one moment stuck out during Thursday’s confirmation hearing for Supreme Court nominee Brett Kavanaugh: He appeared to refer to birth control as “abortion-inducing drugs.”

“Kavanaugh referred to birth control — something more than 95 percent of women use in their lifetime — as an ‘abortion-inducing drug,’ which is not just flat-out wrong, but is anti-woman, anti-science propaganda,” said Dawn Laguens, executive vice president of the Planned Parenthood Action Fund, in a statement.

“This is a red-alarm moment,” tweeted Sen. Jeff Merkley (D-OR).

What Kavanaugh actually said is complicated. He was paraphrasing an argument made by the Catholic group Priests for Life in their suit against the Obama administration over the contraceptive mandate in the Affordable Care Act. Speaking of the form necessary to get a religious exemption from the mandate, Kavanaugh said, “they said filling out the form would make them complicit in the provision of the abortion-inducing drugs that they were, as a religious matter, objecting to.”

In context, it’s not totally clear whether Kavanaugh is endorsing Priests for Life’s claim that birth control causes abortion, or merely repeating it. Ultimately, though, his larger argument is quite clear: To him, the contraceptive mandate was an unacceptable infringement on the religious freedom of Priests for Life (even though Obama’s mandate allowed them to seek an exemption on grounds of religious freedom). This argument shows that if confirmed, Kavanaugh would be likely to rule in ways that would restrict contraceptive access in America.

Nonetheless, Priests for Life argued in Priests for Life v. U.S. Department of Health and Human Services that they should not be forced to abide by the contraceptive mandate because their “sincerely held beliefs prohibit them from providing, paying for, or impermissibly facilitating access to abortion-inducing products, contraceptives, and sterilization.”

They said that the religious accommodation offered by the Obama administration, which allowed religious groups to opt out of providing coverage for birth control by notifying either their insurers or the federal government, was not sufficient because it forced them to “contract with third parties that will provide payments for the objectionable products and services” and “submit documentation that, in their religious judgment, makes them complicit in the delivery of such payments.”

The DC Circuit Court of Appeals rejected their argument in 2015, but Kavanaugh supported their claim in a dissenting opinion. That’s why Sen. Ted Cruz (R-TX) asked Kavanaugh about the case during Thursday’s hearing.

In the exchange many people have cited, Kavanaugh is not quite stating that he himself believes contraceptives to be abortion-inducing drugs. Rather, he is restating the argument made by Priests for Life that abiding by the rules of the religious accommodation “would make them complicit in the provision of the abortion-inducing drugs that they were, as a religious matter, objecting to.”

The way he restates that argument may be significant — by uncritically repeating the term “abortion-producing drugs,” Kavanaugh implies that this term is a neutral fact of the case, when it’s actually politically charged and the subject of much debate. But his overall rationale for his dissent in the case is more revealing of his stance on reproductive health than his use of one particular term.

In his dissent in Priests for Life, Kavanaugh argued that requiring religious organizations to submit a form notifying their insurer or the government of their objection to the contraceptive mandate was an infringement on their freedom of religion. The rules of the religious accommodation, he wrote, “substantially burden the religious organizations’ exercise of religion because the regulations require the organizations to take an action contrary to their sincere religious beliefs (submitting the form) or else pay significant monetary penalties.”

At the hearing on Thursday, he reiterated this view, saying that Priests for Life “was being forced to provide a certain kind of health coverage over their religious objection.”

“The question was,” he added, “was this a substantial burden on their religious exercise, and it seemed to me quite clearly it was.”

His language here might actually be more revealing than his mention of “abortion-inducing drugs” — in his view, requiring religious employers to submit a form to opt out of covering birth control is akin to “forcing” them to provide a certain kind of health care, even though they are not actually required to provide coverage for birth control at all.

The solution Kavanaugh proposes in his dissent is for religious groups to file a simpler “notice” that does not identify their insurer. At the hearing, he characterized his decision process thusly: “is there a win-win in some respects? In other words, the government interest in ensuring health care coverage — can that be provided without doing it on the backs of the religious objector?”

As Michelle Banker, senior counsel for the National Women’s Law Center, noted in August, such a solution might not ensure health care coverage at all: “The government would be forced to track down the insurers for every objecting entity nationwide, which will certainly cause administrative obstacles that could delay or even prevent the government from making sure that women seamlessly receive birth control coverage.”

Moreover, there’s nothing to stop religious groups from objecting to the notice as well, a fact Kavanaugh notes in his dissent: “To be sure, some religious organizations claim that” the notice “still imposes a substantial burden on their religious beliefs.”

However, he writes, “that obviously does not help the Government’s argument in support of the current, even more burdensome form.”

Overall, as Banker puts it, Kavanaugh’s dissent “spells out an extraordinarily broad view of how religion can be used to avoid complying with the law.” His argument “would give organizations tremendous power to bring claims in order to refuse to comply with laws —including anti-discrimination and consumer protection laws — that they claim violate their religion.”

Brett Kavanaugh has been difficult to pin down on the issue of abortion. He has been evasive during the confirmation hearings, and has ruled in only one abortion case. But it’s quite clear, both from his writing and from his comments at the hearing, what he thinks about religious freedom and the law — and the picture isn’t encouraging for advocates of contraceptive access and reproductive rights.