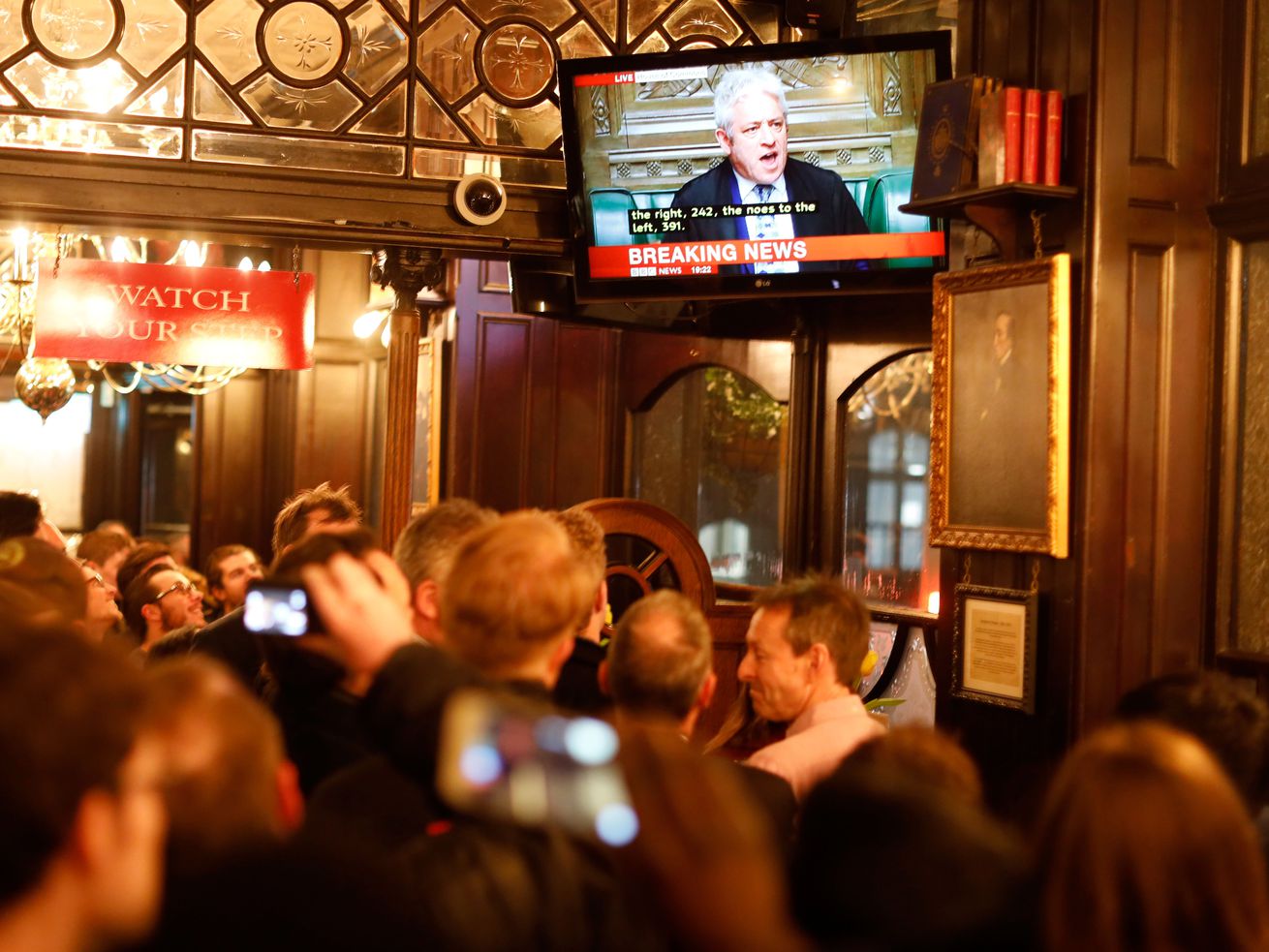 Speaker of the House John Bercow on a television screen in March 2019. | Tolga Akmen/AFP/Getty Images

The speaker said he’d resign on October 31, unless new elections happened before. He’s turned into a controversial celebrity in the Brexit era.

John Bercow, the man who became famous around the world for keeping the rowdy British Parliament in line with his signature shout of “ORDERRRR!”, announced Monday he is stepping down.

Bercow has served as the speaker of the House of Commons for more than a decade, but lately vocal interjections have become the soundtrack to the Brexit debate.

Bercow said Monday that he would resign immediately if members of Parliament (MPs) supported Prime Minister Boris Johnson on a motion to hold new elections in mid-October, also expected Monday, to make way for a new speaker in a new Parliament.

But if Johnson’s second attempt to call an election fails — and it’s almost certainly going to fail — then Bercow says he’ll step down on October 31. The date may look familiar: It’s the current Brexit deadline.

Bercow said, in that case, he’d wait until after Parliament returns in mid-October from its suspension (they’re officially “prorogued” after business ends Monday, or the early hours of Tuesday), and then wait until the end of the month. As he put it, those last days of October “may be quite lively, and it would be best to have an experienced figure in the chair for that short period.”

Bercow’s departure was not totally unexpected, although the timing is certainly quite interesting, and it’s likely to frustrate Johnson and his Brexit supporters.

Bercow has been speaker since 2009, outlasting multiple prime ministers. He had planned to step down in 2017, but postponed his departure after that year’s elections.

Being speaker is usually a pretty low-key job, but Bercow elevated himself to become something of a kingmaker in the Brexit debate. His distinctive style of running the House of Commons and wardrobe of colorful ties also turned him into something of a celebrity.

Bercow is hated by Brexiteers for what they see as his role in frustrating the government and giving pro-EU backbench (meaning not in government) MPs plenty of opportunities to advance amendments or take control of Parliament away from the government. Lawmakers have used that power to do things like pass legislation that would force the prime minister to seek a Brexit extension. At one point, Bercow blocked former Prime Minister Theresa May from bringing back her Brexit deal to the vote without substantial changes.

Which is also why he has a lot of fans among pro-EU, anti-Brexit MPs.

Bercow hinted at his role as spoiler for the government in his farewell speech. “Throughout my time as speaker, I’ve sought to increase the relative authority of this legislature, for which I will make absolutely no apology to anyone, anywhere, at any time,” he said Monday.

“To deploy a perhaps dangerous phrase, I have also sought to be the backbenchers’ backstop,” he added, alluding to the “Irish backstop,” the safeguard for the Irish border in the Brexit deal that’s generated a lot of the drama he’s presided over in Parliament.

Bercow, especially to those less enthusiastic about Brexit, was very much the safeguard, advocating for Parliament and giving MPs the power to challenge the government, especially when it came to attempts to prevent a no-deal exit from the EU.

This has turned Bercow into the enemy of Brexiteers, who see him as having overstepped his job and joined forces with the rest of Parliament to foil Brexit. They’ve also criticized him for being a little too eager in acknowledging his celebrity status. Indeed, Conservatives had plans to try to oust him in future elections, anyway. (Bercow was elected as a Conservative MP, but the speaker gives up their party affiliation when they take the job.)

Brexiteers will likely be thrilled that Bercow is finally leaving, but they’re probably less enthusiastic about the timing of his departure. Since Johnson’s attempts to call a new election are almost certainly going to fail again Monday night, the October 31 departure date means Bercow still has plenty of time to cause problems for Johnson and the Brexiteers who want to take the UK out of the European Union on October 31, with or without a plan in place.

What’s more, Bercow’s departure before new elections have been held means that this Parliament — you know, the one that’s terrified of a no-deal and keeps handing defeat after defeat to Boris Johnson — gets to vote on the next speaker. And, as you recall, Johnson’s lost his majority and isolated nearly two dozen formerly Conservative lawmakers.

So the next guy (or gal) might be Bercow-esque in spirit — although probably without the same joie de vivre when chastising his colleagues.

‘Be a good boy, young man!’ — Watch the Speaker of the UK House of Commons viciously scold his conservative colleague in Parliament pic.twitter.com/ryqvsBxIVB

But Bercow will, as he promised, still be around for at least few more, er, lively weeks in October.