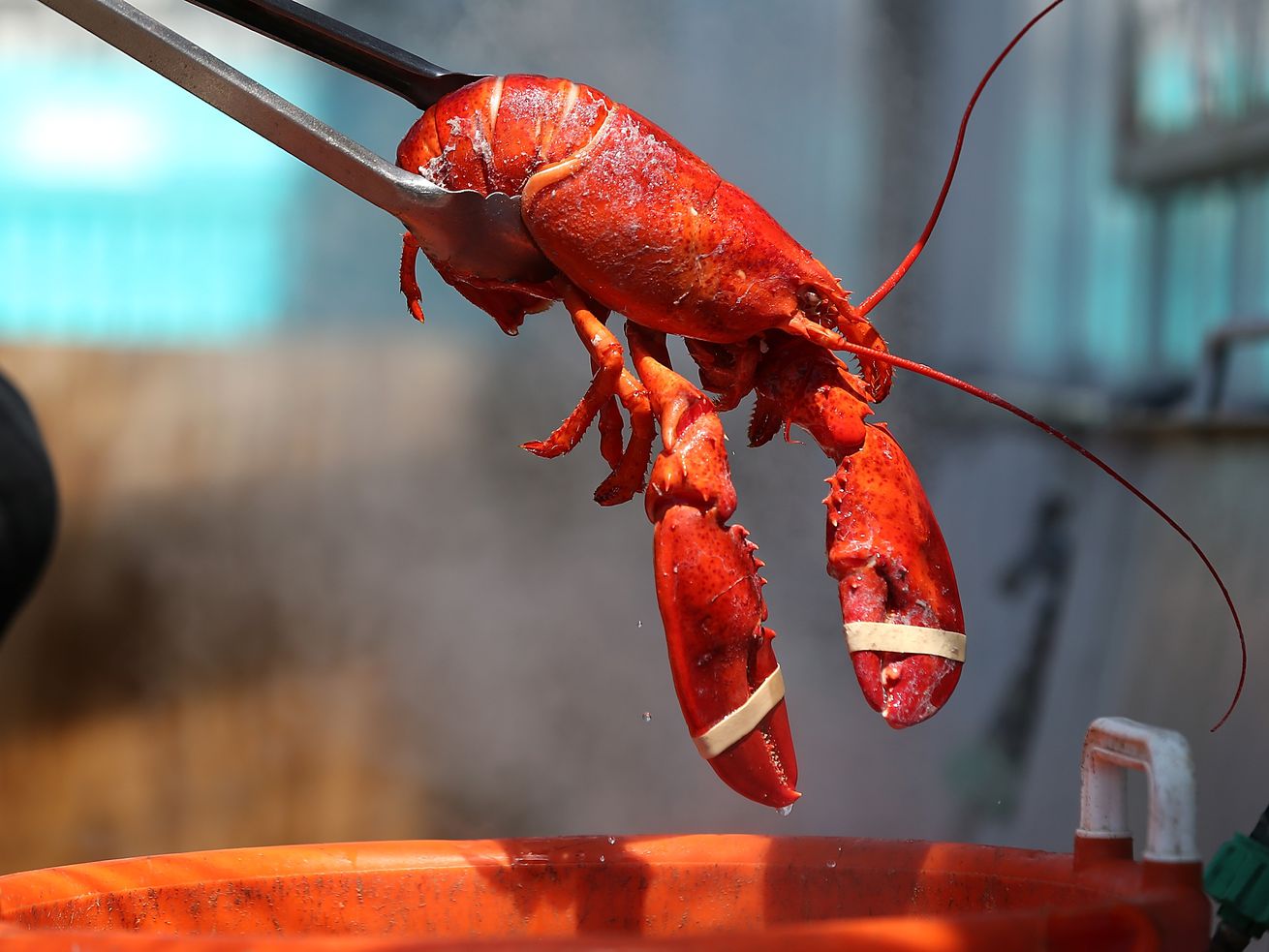 The owner of a Maine lobster pound is sedating her lobsters with marijuana before killing them.

Cage-free eggs. Free-range chickens. Grass-fed cows. Meat eaters who want to assuage their fears over the ethical and environmental effects of their dietary habits seem to have more options than ever when it comes to cruelty-free carnivorism. And now the owner of a lobster pound in Maine is giving customers the chance to chow down on lobsters that have been sedated with marijuana before being cooked.

Charlotte Gill, the owner of Charlotte’s Legendary Lobster Pound in Southwest Harbor, Maine, is getting lobsters high before boiling them alive, according to a report by the Mount Desert Islander. “I feel bad that when lobsters come here there is no exit strategy,” Gill, who has a state-issued medical marijuana license, told the publication. “It’s a unique place and you get to do such unique things but at the expense of this little creature. I’ve really been trying to figure out how to make it feel better.”

Her solution: sedating the lobsters by blowing weed smoke into their enclosures. (It’s unclear whether Gill blew the smoke in the tank herself or used some sort of device, but she told the Islander that she plans to use an air mattress pump to “infuse the water within the tank with marijuana smoke” in the future.) Customers who are concerned about THC levels in their food can still order lobsters that are prepared the traditional way — steamed or boiled alive — but Gill said it’s “literally impossible” for the weed-sedated lobsters to be infused with THC. “I’m not selling an edible,” she said — just a more humane way of killing lobsters.

Whether or not hotboxing a lobster’s enclosure has any effect on its final moments on this earth is almost beside the point. Gill’s attempts at a cruelty-free lobster points to a larger trend: Cruelty-conscious consumers want ethical alternatives to traditionally raised meat and seafood, even if the science isn’t entirely there to back it up.

Does sedating lobsters with weed — or with anything else — actually do anything?

Jennifer Mather, a psychology professor at the University of Lethbridge who specializes in the behavior of cephalopod mollusks, said the jury’s still out on marijuana’s psychological and physiological effects on lobsters.

“We have no idea what cannabis is doing. Nor does anybody know if it’s being deposited in the flesh,” Mather told Vox. “It’d be lovely if somebody did an experiment.”

Gill experimented with a single lobster, which she named Roscoe. She placed the crustacean in an enclosure with a few inches of water at the bottom for a few minutes, blew smoke into the cage, and then tracked Roscoe’s behavior for three weeks, the Mount Desert Islander reported. According to Gill, the lobster stopped wielding claws as weapons after being exposed to marijuana smoke — but Mather warned that this doesn’t necessarily mean it was less anxious.

Those who study the effects of sedatives on lobsters, Mather said, are “worried about whether anesthetics might cause motor impairment but not brain impairment.” In other words, when lobsters get high, it’s possible that they may still feel pain and anxiety without being able to respond to it.

The quickest and most painless way to kill a lobster, Gill explained, is by destroying its brain. “Of all people, Julia Child, in one of her recipe books, explained how to kill a lobster before you cook it. It’s actually fairly simple: You have to know where [the brain] is, and you have to sort of dig through the shell with a pick or a small knife and slash back and forth.”

But for squeamish seafood lovers who are already worried about causing undue pain to lobsters, destroying their brains may sound less palatable than boiling them alive.

The uncertainty around the most humane way to kill lobsters points to a larger problem in ethical food consumption. Consumers are increasingly turning to cruelty-free alternatives to factory-farmed meat and unethically sourced fish, but experts are still debating what kind of consumption does the least harm overall.

After all, grass-fed cows may lead less miserable lives than their factory-confined brethren, but they also produce more methane. Even almond milk, once touted as a cruelty-free alternative to dairy, can have disastrous effects on the environment because of the water needed to produce it.

Then there’s the fact that a lot of the time, consumers are drawn to cruelty-free labels without knowing what they’re actually buying. The New York Times compared the requirements foods need to meet in order to be considered Certified Humane, American Humane Certified, or Animal Welfare Approved and found that the former two labels still allow hens’ beaks to be trimmed and don’t require that cattle have continuous access to pasture. According to animal welfare advocates the Times spoke to, meat companies can easily qualify for American Humane Certified status since the American Humane Association has less rigorous standards than other groups.

There’s also little oversight, the Times found. Dena Jones, the director of the Animal Welfare Institute’s farm animal program, told the Times that the process was “just a paperwork review.”

“A producer has to fill out a very simple form, one page, two sides, and submit some supporting information,” said Jones.

Meat consumption is up regardless

Even if the average person doesn’t know what Certified Humane or Animal Welfare Approved actually means, the labels may be enough to assuage their ethical concerns.

Following a 19 percent decline in beef consumption from 2005 to 2014, overall meat consumption has skyrocketed in the US in recent years. A January report by the US Department of Agriculture found that American meat production is at record highs. The average American is slated to eat 222.2 pounds of red meat and poultry this year, the report found, making 2018 the biggest year for meat consumption since 2004.

The rise in animal proteins is likely due to a combination of high supply, low prices, and low-carb diets — as well as the belief that meat suppliers are embracing more humane ways of raising and killing livestock. In fact, a 2017 Nielsen report found that more than 30 percent of Americans are willing to pay more money for meat that is locally sourced and ethically raised. (Global seafood consumption has also reached record highs, even amid concerns about overfishing.)

But for animal welfare advocates, there’s no truly ethical way to raise cattle or fish for lobster.

Jeff Sebo, a clinical assistant professor of environmental studies at New York University, suggested that the most ethical path forward is to decrease overall seafood consumption and instead promote plant-based foods.

“There is no ethical way to fish lobsters or any other animal for mass consumption,” he told Vox in an email. “When we fish for mass consumption, we harm the animals we catch intentionally, we harm the animals we catch accidentally, and we harm the environment by damaging the seabed, depleting aquatic populations, and more. In order to address these harms, we need to eat plant-based foods and promote social, political, and economic changes that make plant-based foods more accessible for people.”

And, Sebo said, there’s no evidence that getting lobsters high reduces the pain they feel when they’re killed. “In general, if we are uncertain about how lobsters experience being boiled or steamed alive,” he said, “we should err on the side of caution, not on the side of human convenience.”