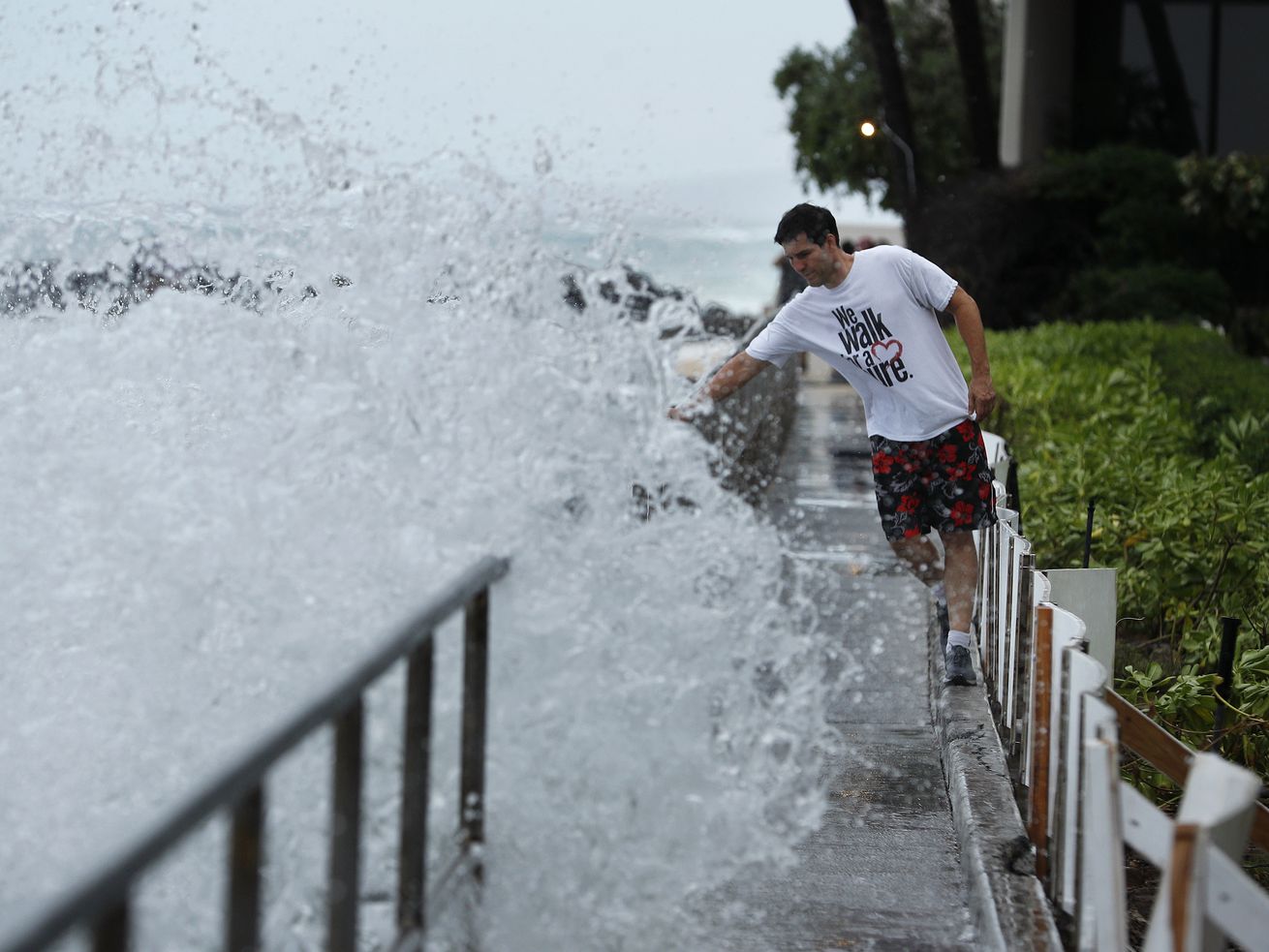 The storm has already dumped more than three feet of rain on the Big Island.

Hurricane Lane was downgraded to a tropical storm but continued to unleash strong winds and heavy rain on the Hawaiian islands Saturday, as residents and tourists scurried indoors to wait out the storm.

According to the National Weather Service, the storm is bringing not just prolonged rainfall, but also flash floods, landslides, damaging winds, and storm surges to the islands, including Oahu and Maui. Forecasters are particularly concerned about rivers that could overflow with deep and fast-moving water, posing a life-threatening risk.

“This will be a long-duration event with the potential for heavy rainfall continuing Sunday into early next week as Lane begins to track westward and away from the state,” the National Weather Service reported Friday.

The storm has already dumped more than 40 inches of rain on the Big Island. Maui Electric, a local utility, warned the storm could bring extended power outages.

This is what Rainbow Falls on the Big Island looks like after more than a foot of rain today. NWS is forecasting heavy rain through the weekend with rates at 1-2 inches per hour at times pic.twitter.com/SrdcdD0SGF

The latest projection shows the storm moving westward, away from the Hawaiian islands:

But the National Weather Service warned that the course of the storm could still change in its latest update:

Lane is expected to continue moving slowly northward this morning, followed by a turn to the west with an increase in forward speed starting later today or tonight. This forecast track takes south of Kauai and Niihau later today and tonight. However, regardless of the storm’s track, life threatening flash flooding and gusty winds will continue to extend far beyond the center’s location. Do not focus on the exact forecast track or intensity of Lane.

Though the storm is getting weaker, its pace is slowing down, which means it will continue to dump rain over the islands. So it still poses a major threat to Hawaii’s 1.4 million residents and 300,000 tourists.

A slowing storm was the key driver behind the record-breaking rainfall in Houston last year during Hurricane Harvey. The storm essentially stalled over the city, dumping 33 trillion gallons of water. Rain gauges reported rainfall higher than 60.58 inches.

Prior to Harvey, the most rainfall ever seen in the United States came from Hurricane Hiki in 1950, which dropped 52 inches of rain in Hawaii. Since 1959, only two other hurricanes have made landfall in Hawaii.

Scientists anticipate that climate change will make hurricanes more severe. Warmer air can hold on to more moisture, which in turn can lead to more torrential rainfall. This contributed to the rainfall from Harvey and the other major hurricanes that struck the United States last year.

Hawaii also faces some unique hazards, like volcanoes. Earlier this summer, Kilauea volcano on Hawaii’s Big Island began spewing ash and gurgling up lava. The eruption has now slowed down, and scientists don’t think the volcano will influence the storm or vice versa.

Tracy Gregg, an associate professor of geology at the University of Buffalo, told CNBC that the Kilauea volcano and Lane are like ”two monsters passing in a closet. They are really not going to notice each other. They are just going to keep doing what they do.”

Brush fires have also ignited in Maui, and the concern is that Tropical Storm Lane’s winds could fan the flames before the rain quenches them.

While #HurricaneLane has dumped more than 2 feet of rain on #Hawaii‘s Big Island, neighboring #Maui is dealing with a large brush fire near the #Lahaina resort area. The Suomi NPP satellite saw the glow of the fire this morning as Lane lurks nearby. pic.twitter.com/lhsfBjcGXe