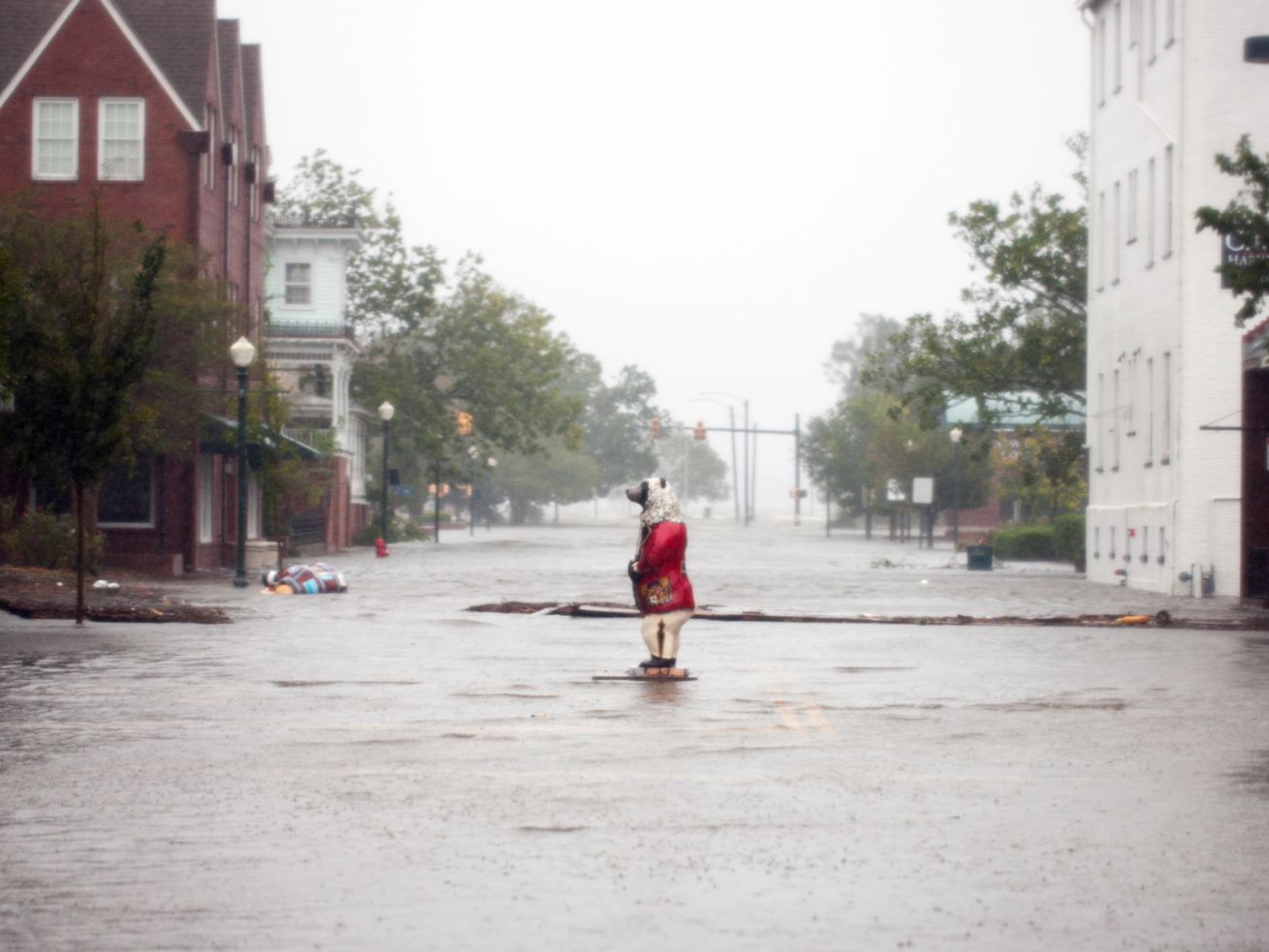 So much more rain is on the way.

As of Friday afternoon, more than 40 inches of rain had fallen in Morehead City on North Carolina’s Crystal Coast. That’s an enormous amount of water. And so much more is on the way.

Hurricane Florence made landfall in North Carolina on Friday morning near Wilmington, but it isn’t leaving anytime soon. The storm has slowed down to a sluggish 3 miles per hour and is essentially stalled over the Carolinas. Even though the winds have died down to 80 miles per hour, the danger this storm poses in terms of flooding is far from over. Local authorities have reported at least two storm-related deaths so far.

“It cannot be emphasized enough that another serious hazard associated with slow-moving Florence is and will be extremely heavy rainfall,” the National Hurricane Center warned Friday afternoon.

Already, the National Weather Service is calling the flooding “catastrophic.” In all, forecasters estimate that 18 trillion gallons of water may drop on the region. Here’s what we know about the flooding still to come and why this is shaping up to be a very costly natural disaster.

Storm surge flooding in Beaufort. The photo below represents flooding with this afternoons high tide. Conditions were worse by a few inches during last night’s high tide. Storm isn’t over, stay safe out there! https://t.co/F9pZLAbXU6

The storm and its remnants will creep from North Carolina to South Carolina for the next two days before heading further inland. Meteorologists are forecasting that 50 inches of rain may fall in some areas when this is all said and done.

That would make Florence comparable to last year’s Hurricane Harvey, which stalled over the Houston area and broke the national rainfall record for a single tropical storm. It dumped around 27 trillion gallons of water in total and destroyed around 30,000 homes.

40-50″ rainfall totals beginning to show up in higher-res guidance as the event begins to unfold. Reminds me of how guidance began to respond in Harvey. Regardless of exact totals, rainfall will be exceptional and flooding catastrophic. pic.twitter.com/y7gv3HTh4R

Track where the storm goes from here with this map that pulls in the latest forecast from the National Hurricane Center.

Storm surge, or coastal flooding, is often the deadliest aspect of a hurricane. The winds of a hurricane literally blow water onshore, making beaches, inlets, and rivers crest much higher than usual. And the surges are added feet of water on top of high tide.

The storm surge threat is not over. The slow movement of Florence means there’s more time for storm surge waters to accumulate over the next few days.

The center of Florence will not move far at all for a few days. With such a large storm, this means a long-duration event with plenty of opportunity for #Florence to pile up storm surge, batter those in its path with winds, erode beaches, and drop catastrophic amounts of rainfall pic.twitter.com/a4FvjEMO5E

Here are the locations most likely to be impacted. (See the whole map here.)

It’s a lot of potential flooding over a huge area. And it’s not just happening on the coasts. As the storm progresses and the heavy rain continues to fall, rivers and creeks further inland will start to overflow as well. Not helping: The fact that the ground in the Carolinas is already saturated from a storm-filled summer. That will lead to more surface runoff inland.

For instance, the Cape Fear River in Fayetteville, North Carolina, is about 100 miles from the coast. It’s expected to flood more than 20 feet above its banks.

Whoa. The Cape Fear River at Fayetteville is expected to climb to 62.4 feet. Flood stage is 35 feet… Flooding remains a HUGE threat in the days ahead-especially to our communites along rivers. #wral pic.twitter.com/kfQCwP10qJ

This storm is impacting 5 million people. Up to 3 million may be without power. A few people have already died.

About 5 million people throughout the region will see 10 inches of rain or more over the next few days, the NHC says, covering an area hundreds of miles wide and including the cities of Wilmington, Fayetteville, Charlotte, Myrtle Beach, and many others. The southeastern-most areas of North Carolina will see the worst of it, where accumulations greater than 20 inches are predicted.

Duke Energy, a power utility that services North and South Carolina, estimates 1 to 3 million people could be without electricity due to the storm, and that it could take weeks to restore it all. Hundreds of people have had to been rescued from their homes in New Bern, North Carolina, by emergency responders and volunteers.

Already, the wind, rain, and floods have claimed a couple of lives, according to Wilmington police.

WPD can confirm the first two fatalities of Hurricane #Florence in Wilmington. A mother and infant were killed when a tree fell on their house. The father was transported to NHRMC with injuries. https://t.co/FC5PAhuxig

A preliminary assessment from Stony Brook University modeled the forecast of Hurricane Florence but also imagined what would have happened in a world that hadn’t been artificially warmed up by greenhouse gas emissions. In short, they concluded, the warmer atmosphere we live in today allowed Florence to dump 50 percent more rainfall.

But we don’t need these studies to know that climate change has already had an impact. As the Washington Post reported Thursday, “Some six inches of the coming storm surge is attributable to climate change because sea levels have risen in the past 100 years or so.” If this same exact storm had hit before seas levels had risen, it would not be able to push as much water inland.