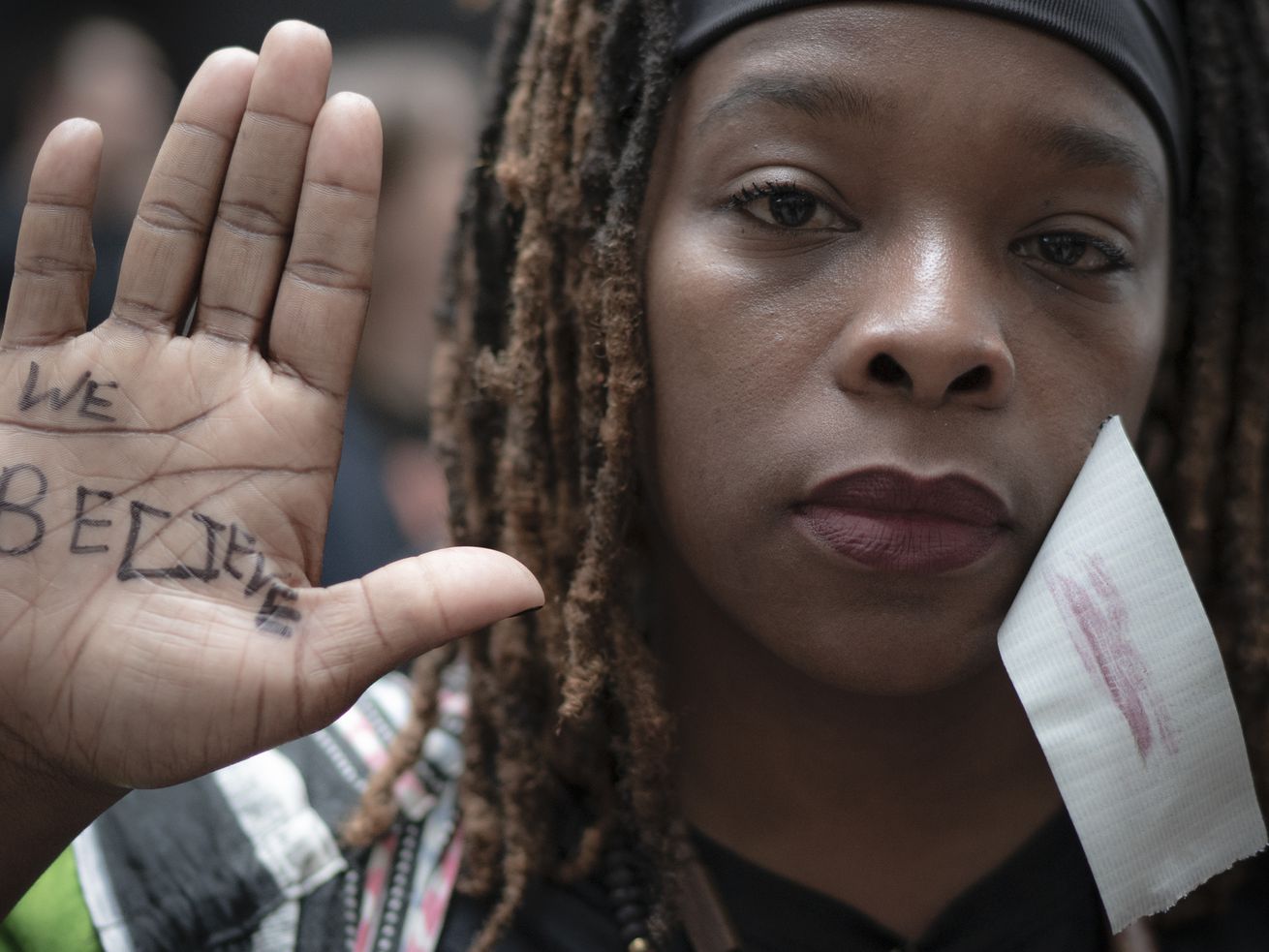 It was a surreal contrast to Ford’s hearing.

As Christine Blasey Ford testified in front of the Senate Judiciary Committee on Thursday, a dozen women who had attended her high school joined hands in the atrium outside the building and began singing their alma mater song.

The women had all been students at Holton-Arms School, the prep school that Ford attended when, she says, Supreme Court nominee Brett Kavanaugh sexually assaulted her in the 1980s.

They told me that they wanted Ford to know that they had her back.

“We want her to know that we support her, that we believe her,” said Lawren Wooten, a 29-year-old medical student who graduated from Holton in 2008. “As a survivor myself, I am shocked and disgusted that women’s stories are still being disregarded.”

Wooten struggled to hold back tears as we spoke, while other women in the group cried openly and shared their own stories of surviving sexual assault.

It was a surreal contrast: Inside the Senate hearing room, Ford was telling senators about the trauma she had experienced, hoping members of Congress would believe her. And outside, women were talking about assault and supporting one another in the process.

“We believe you,” the women told each other in turn, as each shared her experience of rape and sexual violence.

They were not alone. Around them, hundreds of other women and men had shown up to protest Kavanaugh’s nomination. They held signs, wore T-shirts and pins, and wrote on their skin with black marker — all with a variation of the same message: We believe survivors. They kept reminding each other not to yell or block the walkways, knowing that police officers standing nearby could arrest them on charges of disorderly conduct or unlawful assembly.

As soon as Ford began to give her testimony around 10:30 am, the entire building went quiet. Women, men, and some children gathered around their cellphones, listening to her describe the terror she says she felt at age 15, when Kavanaugh allegedly put his hand over her mouth, pinned her down, and tried to take off her clothes and force himself on her. Kavanaugh has denied the accusation.

Most people gathered in the building’s atrium to listen, but Ford’s words also echoed through the hallways from overhead speakers. Senate staffers stopped working to watch on C-SPAN. Two security guards pressed their ears to a speaker to catch every word. One of them shushed a man nearby who was talking loudly on his cellphone.

Around 8:30 am, dozens of protesters began demonstrating outside the Senate office building on Constitution Avenue in Washington, DC, where Ford was set to testify.

Most wore black, and some had their mouths taped shut with the words “Believe Women” scrawled on top. “We believe Anita Hill, We believe Christine Ford,” they shouted into bullhorns. They held a banner bearing personal messages for Ford, such as “thank you for your bravery” and “thank you for speaking up.”

Some of the men and women in the crowd had skipped work or class to be there. Florence Rivkin, a 23-year-old high school teacher from the District of Columbia who stopped by the protest before heading to her job, said she was angry on behalf of her teenage students who were struggling to process the news.

Christine Blasey Ford’s supporters march outside the Senate office building before the hearing.

“[Female students] don’t understand why this is still a problem,” Rivkin told me. “They should be focusing on algebra and the SATs, and not have to worry about being assaulted.”

Across the street, a small group of Kavanaugh supporters stood quietly in a park, wearing “Women for Kavanaugh” T-shirts and holding “Confirm Kavanaugh” signs.

As the hearing approached, dozens of Blasey Ford supporters lined up outside the entrance to the Senate office building where Blasey Ford would testify.

Tracey Corder, an organizer with the progressive Center for Popular Democracy, said she has been meeting with Republican members of Congress in recent days and urging them to take Ford’s allegations seriously.

“Survivors are being retraumatized by all of this, and we’ve been telling [senators] that we need a Supreme Court justice who is a fair and decent person,” said Corder, who flew in from Oakland, California, to join the demonstrations. “If this were an episode of Scandal, [Kavanaugh] would have withdrawn by now,” she continued. “That’s our current politics —it’s even more absurd than television.”

I also met a group of law students from Georgetown University, some of whom had decided to skip class to attend. “This whole process just confirms the shame and victimization that women have to deal with when they come forward,” said Sabiya Ahamed, who was holding a sign that read “What is happening?!”

“That’s exactly how I feel right now,” she said, smiling bitterly, lifting up the sign.

One of her classmates, Delia Brennan, was celebrating her 24th birthday. Brennan said it seemed fitting to spend her birthday protesting the confirmation of another man accused of sexual misconduct to the US Supreme Court, referring to the sexual harassment allegations against Justice Clarence Thomas by Anita Hill in 1991.

“I was just thinking that Christine Ford and Anita Hill have been holding their grief for longer than I’ve been alive,” Brennan said.

By the time Ford was about to speak, hundreds of her supporters had lined up in the stairwells and filled the building’s atrium. They were surrounded by a swarm of police officers who carried disposable handcuffs clipped to their belts, ready to arrest anyone who got too rowdy.

Only a handful of Kavanaugh supporters mingled with the people who had come out to demonstrate in support of Ford. At one point, both groups tried to talk.

Ayanna Fuentes, a high school student who flew in from Seattle to protest for Ford, walked up to one of the few women wearing a pro-Kavanaugh shirt. “I just want to talk to you, honestly, respectfully, to understand what you are thinking,” Fuentes said to the middle-aged woman.

The woman said she was there demonstrating “for the truth.” She was about to say more, but was cut off by a man who pulled her away and told her “don’t engage, don’t engage.”

Fuentes got upset and told the man he was acting like the woman’s “handler.”

“She was open to having a conversation with me,” said Fuentes, a 19-year-old senior in high school. “I just wanted to see her side.”