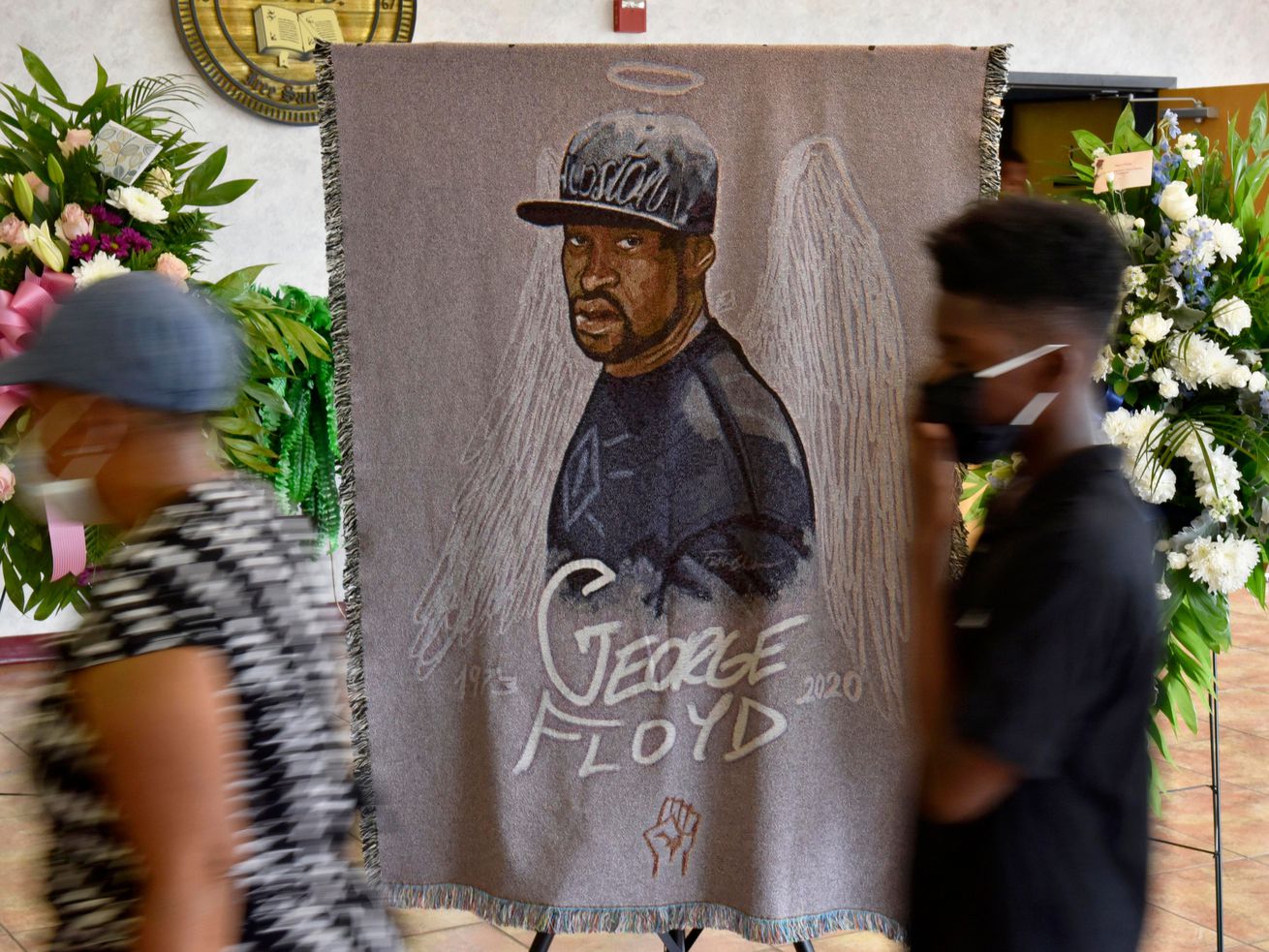 A socially distant public viewing was held before a private service for friends and family was broadcast.

Hundreds of people lined up outside a conference center in Raeford, North Carolina, on Saturday to attend a memorial service for George Floyd.

When Floyd’s gold casket rolled into the building in Raeford — just outside of Fayetteville, where Floyd was born — crowds nearby reportedly shouted, “Black power! George Floyd!”

For hours, the public walked through the center — socially distant, masked, and 10 at a time — to view Floyd’s body. Later in the day, at 3 pm ET, a service for the family was held, which was also broadcast online for all to take part in.

Outside the conference building, people continued to honor Floyd by lining the streets with flowers and signs as the service proceeded. North Carolina Gov. Roy Cooper paid his respects by lowering the flags on state facilities to half-staff for the day. And some mourners even came from out of town, like Gregg Packer, who took an overnight train from Long Island to attend the memorial, the News & Observer reported.

“I felt like I needed to come down here to support the protests and the family of George Floyd,” he told the News & Observer. “I hope that we can all get along with each other, that we can start treating each other the way we all should.”

Mourners gather at makeshift memorial for George Floyd during his public viewing at Cape Fear Conference B Church in Raeford, North Carolina

The service was held for about 125 people in a room where a painting of Floyd with a halo and angel wings stood. Family members, friends, and state officials gathered to not only celebrate the life of George Floyd but also to condemn the police violence that led to his death.

Hoke County Sheriff Hubert Peterkin criticized his colleagues who abuse their power: “We, as law enforcement officers, don’t have the authority to bully, push people around, and kill them because we have on a badge and a gun,” he said.

Peterkin added, “I don’t care how much you march with the groups, get on your knees and play with the children, It doesn’t mean nothing if you can’t say these six words, ‘We are part of the problem.’”

US Rep. G.K. Butterfield also spoke to the guests to announce that the Congressional Black Caucus would unveil a legislative response to police violence against black people on Wednesday with the goal of preparing a floor vote by the end of June.

The service is the second of three planned. The first was held on Thursday in Minneapolis, where Rev. Al Sharpton delivered a moving eulogy:

“The reason we could never be who we wanted and dreamed of being is you kept your knee on our neck,” Sharpton said, addressing the nation. “It’s time for us to stand up in George’s name and say, get your knee off our necks.”

Another memorial service will be held on Monday in Houston, where Floyd grew up and lived most of his life.

The memorial came amid large protests scattered across the US, many of which proceeded peacefully following an end to curfews in cities across the nation.

On Saturday, thousands gathered outside the Lincoln Memorial in the nation’s capital before marching toward the White House:

Thousands of protesters gathered outside the Lincoln Memorial amid global Black Lives Matter protests over the death of George Floyd. https://t.co/hh7e6LX9nC pic.twitter.com/ZhgLpQCpsU

The protest is projected to grow to one of the largest in the city’s history, with hundreds of thousands expected to attend.

Protesters also continued to gather in Minneapolis, where Floyd was killed. On Friday, more than a thousand people gathered at the offices of Attorney General Keith Ellison and demanded he review all recent police shootings, the Star Tribune reported. More protests are planned there for Saturday.

Thousands marched in Philadelphia at the same time Floyd’s memorial service was held in North Carolina. The protests were peaceful as they shouted their demands for racial justice and budget cuts to the police department, according to the Philadelphia Inquirer.

Thousands also participated in demonstrations in Chicago, Phoenix, Orlando, and dozens of other cities and towns across the US. And protests were held across several different countries as well, including Germany, France, Japan, Iran, and Zimbabwe.

In London, tens of thousands of people showed up at Parliament Square to walk toward the US embassy on Saturday afternoon despite a pandemic-related order banning more than six people from different households from gathering outside. The crowd silently knelt in solidarity with the Black Lives Matter movement for one minute, according to the New York Times.

Hundreds also gathered in Paris, although authorities banned protests outside the US Embassy. Undeterred, protesters gathered at a public square near the embassy and held up their Black Lives Matter signs, Reuters reported.

Although the protests are growing calmer than when they first started two weeks ago, they continue to grow and show no signs of stopping — a sign that recent police killings in the US have become a rallying call for people worldwide.