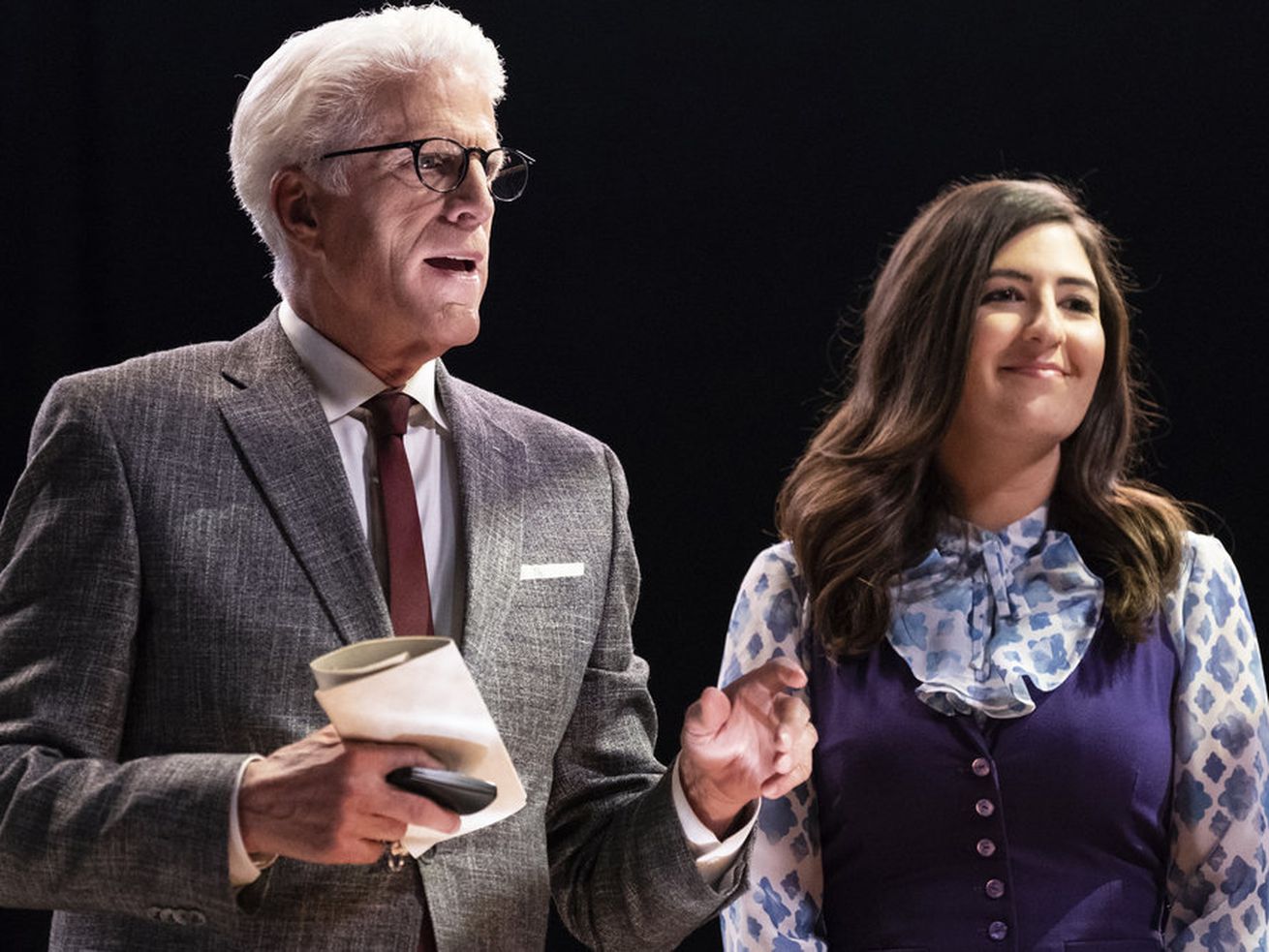 It involves a hotline for broken dolls.

One of my favorite things about one of my favorite shows — NBC’s daffily brilliant afterlife-set sitcom The Good Place — is that when actors auditioned for the series, they were not told who their characters were.

Instead, creator Mike Schur (previously of The Office and Parks and Recreation and Saturday Night Live, etc.) came up with seemingly normal characters who possessed some of the same qualities as the characters on the show, then wrote short sketches about them for the actors to perform as their audition.

The actors would come into the casting session, perform as characters who were almost but not quite the characters on The Good Place, and then hopefully book the job based on that.

So when D’Arcy Carden, who plays the metaphysical computer/robot/angel/demon/thing Janet on the series, joined me for the latest episode of my podcast, I Think You’re Interesting, I wanted to ask her about her experience with The Good Place’s audition process — and whether her long experience working in sketch comedy in the decade before she broke through with The Good Place helped her prepare for that audition.

Carden is one of my favorite performers on TV (in addition to The Good Place, she plays a smaller part on HBO’s wonderful hit-man comedy Barry), and I love the way she’s turned Janet into an out-and-out weirdo without sacrificing any of the character’s heart. That made her story of the audition process all the more interesting, and a selection from our conversation, lightly edited for length and clarity, follows.

One of the things that’s part of Good Place lore is that when Mike [Schur] was first doing the show, he wrote character breakdowns that had nothing to do with the characters because for some reason, the creative team was trying to keep the premise of the show a secret. And then when NBC picked up the show, the network just immediately said what it was about, so that was all for naught. But do you remember what the breakdown was for who became Janet?

My audition? It was a helpful woman. I’m sure it said something along the lines of “a kind, helpful woman” who worked at a hotline for broken dolls. So you would call this woman and let her know, “My doll’s eye fell off,” and then she would come up with all these problem-solving suggestions. They were insane but different ways to fix the problem.

One was like, “My doll’s eye fell off,” and then one was something more drastic, and then the last one was, I think, her husband called, and their house was on fire or something like that. It was basically the same tone of, “Well, here’s how we can fix that.” But it didn’t say anything about robot anything. It didn’t say anything about the afterlife. It just was helpful, pleasant woman.

And what ended up being Janet in season one, especially the first few episodes, was pretty much exactly what the audition was. It just was like, “How can I help?!”

Probably your background helped with that, because that’s basically a comedic sketch. That’s something Lily Tomlin might have done on Laugh-In. So tell me about approaching that audition.

It’s a funny one, because I am such a huge Mike Schur fan. I had never met him before. Also, Drew Goddard, another amazing writer-director-producer [who directed The Good Place’s pilot], I knew he was going to be in the audition. So basically it was two people that I was a huge fan of, [and] I knew this role could not be mine, for I was a lowly no one.

But I also was like, “This’ll be a great opportunity for me to show these guys what I got, or make them laugh. I’m going to make an impression so that in season four of this show that they’re making, they’ll cast me as, like, the lunch lady.”

So I did put a lot of work into the audition. And auditions are insane and stupid and horrible and weird and make no sense. Sometimes you connect with a character, and sometimes you don’t, and you just have to make it work. This was a character where, like, “Ooh, I totally know who this person is!” And it almost felt easy. Like I said, a lot of times that isn’t the case. Sometimes you’re really struggling to just, like, fake-act, which is just the grossest feeling on earth, but this one just felt almost easy.

The first audition was so fun and pleasant, and Mike and Drew were so great, and so was Allison Jones, the casting director. It was such a great, easy, comfortable, fun room that when I left the room, almost my head was spinning like, “I know I didn’t get it, but damn, that felt so good.” And then I got a callback, and it was a very similar vibe in the room — easy to talk to the people in the room.

I kept having these experiences with these auditions, where it was like, “There’s no way I’m getting this. I know that. That’s not happening. But that felt great.” And it just kept going like that until I finally got this 11 pm phone call after waiting for a month to hear about it, while I was watching Fargo season two, which means I was watching Ted Danson and falling more in love with him with every episode.

There’s a power in thinking you’re not going to get it.

So that’s what I mean by auditions are just cuckoo. You go in and you do it one time, and in no acting situation is that [normal]. If you’re in a play, you’re rehearsing for months. If you’re on set, you’re doing take after take. I’m not suggesting there’s a better way to do it, really. Any other way would be so time-consuming, but auditions just feel kooky.

For much more with Carden, including her thoughts on how to play a non-human character (and other actors she thinks have done a great job at exactly that), listen to the full episode, which also includes a discussion with another of my favorite TV scene stealers, Natasha Rothwell, who plays Kelli on HBO’s Insecure.

To hear interviews with more fascinating people from the world of arts and culture — from powerful showrunners to web series creators to documentary filmmakers — check out the I Think You’re Interesting archives.