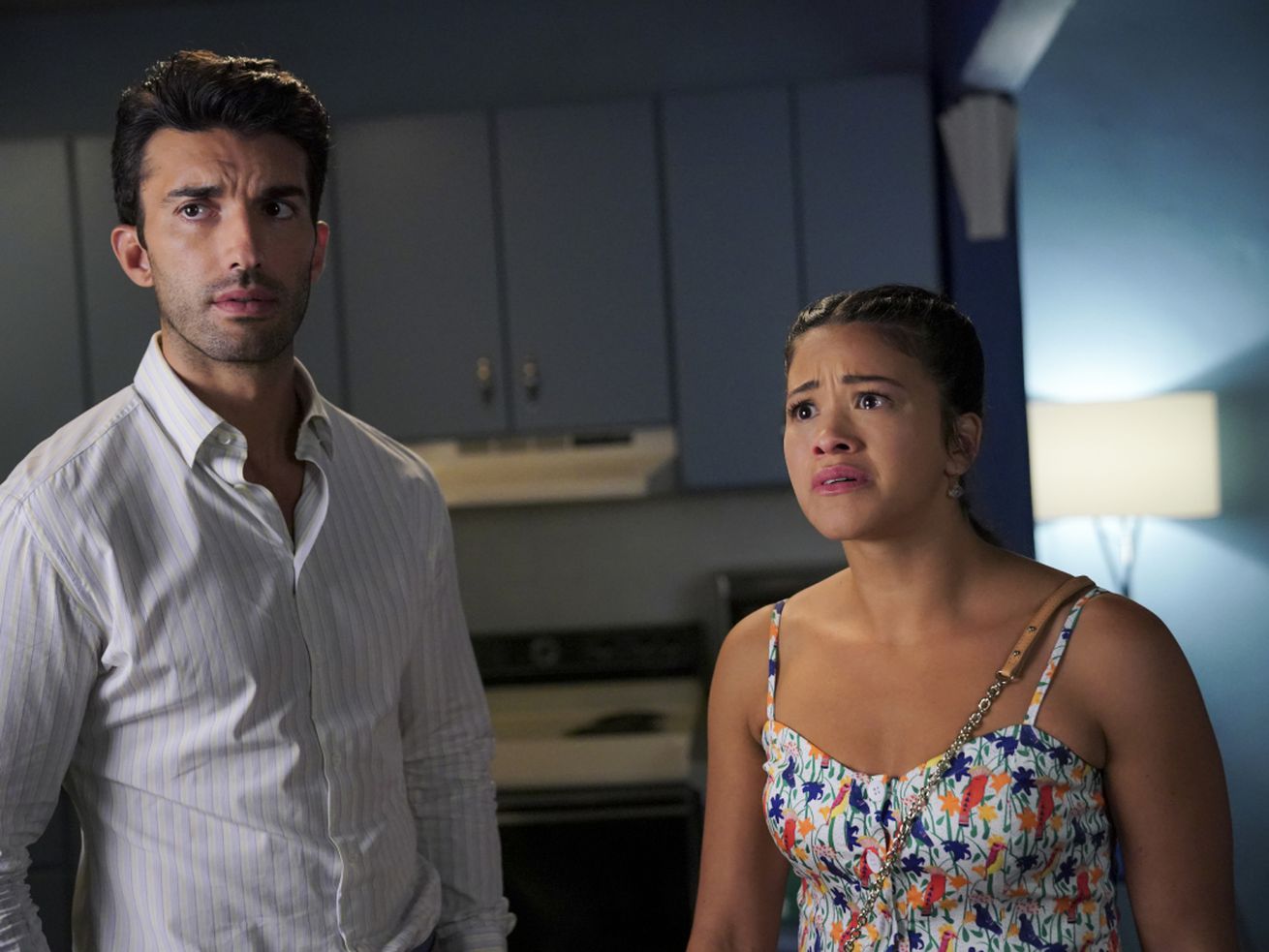 Jane the Virgin heads into its final season with one big question: Who is Jane?

Jane the Virgin ended its penultimate season last April with a cliffhanger so shocking that I feel compelled to protect it with a spoiler warning still, even though you have by now had a full 11 months to catch up to it. The moment was a classic telenovela twist, the kind of trope that given Jane’s genre we should have all seen coming — yet it was jaw-dropping nonetheless.

That’s because Jane the Virgin has always stayed grounded in the emotional reality of its characters, and especially that of warmhearted, bright-eyed Jane (Gina Rodriguez). Whatever over-the-top, outlandish high jinx Jane is going through — Accidental artificial insemination! Infant kidnapped by crime lords! It turns out her rent was being paid by her nemesis–turned–frenemy all along! — the show always takes the time to let Jane fully feel the emotional consequences of the plot twist.

So when wild telenovela tropes pop up in Jane’s life, they don’t feel as if they exist to shock the audience just for the sake of shock. Sure, Jane the Virgin takes place in a heightened reality and its events would never happen in our own world — but Jane’s reactions are so fully explored, so carefully shaded, that they always feel real.

At the end of season four, we experienced the shock of the plot twist. This week, in the first episode of Jane’s fifth and final season, written by showrunner Jennie Snyder Urman and directed by series star Rodriguez, we witnessed the fallout. And the plot twist became suddenly, devastatingly real.

Seriously, do not @ me about spoilers if you read below this point, you have been well warned

So Michael (Brett Dier) is back. Michael, who formed one peg of the love triangle that anchored Jane the Virgin’s first two seasons; Michael, who survived getting shot in the season two finale after his wedding to Jane; Michael, whose apparent death in season three — of a rare heart condition, we were told at the time — sent Jane reeling into grief.

Except not exactly. Michael, we learn, has amnesia. (Back from the dead and amnesia! Telenovela bingo!) He now goes by Jason, as in Bourne. (“I’ve always loved a good play on words,” smirks the dastardly crime lord Sin Rostro, who is of course responsible for both Michael’s faked death and his amnesia.) And with the loss of his memories, his personality has changed: While Michael loved his cat Faith, was devoted to Jane, and matched Jane’s rapid-fire quipping beat for beat, Jason is a simple man who prefers dogs to cats, doesn’t seem interested in Jane but does think Petra is hot (fair), and stammeringly calls everyone “ma’am.”

Faced with this new version of Michael, Jane spirals. At home with her mother and grandmother, she launches herself into a panicked, restless monologue that lasts for seven minutes and a single, unbroken take — and that embodies some of what’s so compelling about Jane itself and about Rodriguez’s performance.

The setup here is just a little bit gimmicky: a seven-minute single-shot monologue directed and delivered by the star of the show is like a dangling treat for critics. It’s designed to make hot-take writers across the internet fawn over Gina Rodriguez’s acting chops and developing directorial flair.

But you know what? That fawning is well deserved. Gina Rodriguez is a fantastic actress, and her careful choreography of this monologue allows her manic energy to shine: We feel every bit of Jane’s trapped, fidgety horror underneath Rodriguez’s sunshiny smile. “I’m fine, it’s fine, I’m fine,” she keeps repeating, as the cracks in her careful composure grow ever bigger.

This twist fundamentally changes Jane’s sense of her identity. She has the rest of the season to decide who she is.

The thing that troubles Jane most is that with Michael back, her identity has fundamentally changed. “You tell all these stories about yourself, and that’s who you are. That’s your identity. And I’m a widow!” she says. “I mean, that’s not all that I am: I’m a mother, and a daughter, and a published freaking author. But underneath it all, at the doctor’s office — single, married, divorced, widow — I circle widow!”

Jane the Virgin is a story that Jane is telling about herself, and that story is about her identity and the labels she uses to define it. For the first two and a half seasons of the show, every episode began with a title card that informed us that Jane was Jane the virgin. After Jane lost her virginity, the title card began scratching out “virgin” and replacing it with new labels: Jane the flirt, Jane the maid of honor, Jane the columnist, Jane the widow.

But this episode began with a question: “Jane the ???”

As Jane the Virgin heads towards its final episodes, that’s the fundamental question it has to answer, amnesia or no amnesia, love triangle or no love triangle. Who is Jane? If Jane isn’t defined by her sexual history or her romantic status or any of the other labels she’s hidden behind in the past, then who is she?

It’s one of the most basic questions of human existence, and the way the show grounds Michael’s reappearance in that question is what really makes the twist land. Michael has torn apart the way Jane thought about herself, and now she has to find out who she really is.

We don’t know for sure what Jane will conclude — but we do have some clues to drawn on, from way back in season three, when Jane lost her virginity in the show’s first, destabilizing loss of identity.

At the time, the newly married, newly sex-having Jane tried at first to claim her new sexual status affirmatively, as something to be happy about. “I’m a person who’s had sex,” she told her reflection, trying to sound as though it was no big deal.

But later, she broke down in tears to her mother. “I just feel like I lost something,” she said. “Like a part of my identity.”

Xo smiled. “You just gained something,” she said. “A whole new dimension of your life, your relationship.”

By bringing Michael back to life, Jane the Virgin took away part of Jane’s identity. Now we’ll all get to see what she gains in its place.