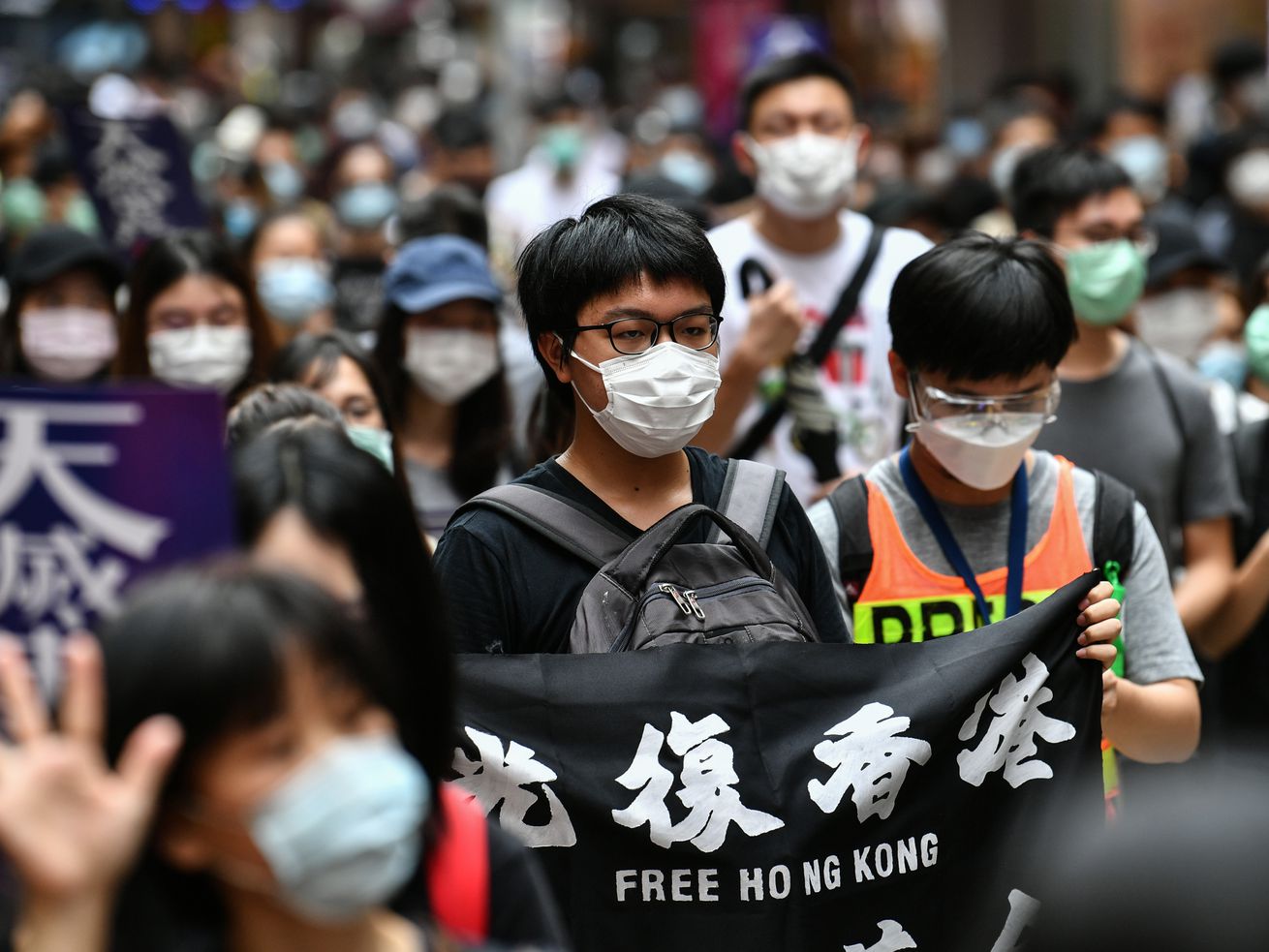 Fear that China will crack down on all dissent in the territory spurs the biggest demonstration in months.

Thousands of demonstrators filled the streets of downtown Hong Kong on Sunday, defying social distancing protocols to protest Beijing’s announcement of a sweeping new national security law that could unravel many of the civil liberties residents enjoy in the semi-autonomous region of China.

Police used water cannons, tear gas, and pepper spray to disperse protesters, and there were reports of protesters throwing objects like plastic bottles and umbrellas at the police. At least 120 people were arrested.

The protest — the largest in the territory since the spread of coronavirus-caused lockdowns across China — reflects an intensification of longstanding tensions between pro-democracy protesters and the Chinese government at a critical political moment in the region.

The demonstrations came as Beijing has announced plans to bring Hong Kong further under its control using a forthcoming national security law — one experts say could be used to quash dissent and end many liberties Hongkongers have that those living in mainland China do not, like freedom of the press.

The ruling Communist Party has long endeavored to bring Hong Kong more fully under its control, and has signaled it would prefer not to wait until 2047 — when the city’s special status expires — to do so. In light of the local government’s failure to pass legislation giving the national government that control, it now appears Beijing is taking matters into its own hands, as Vox’s Jen Kirby has explained — and that it is moving to bring a lively protest movement that gained serious momentum in 2019 to heel.

Members of the protest movement — which had a major success in defeating pro-Beijing legislation in 2019 — returned to the streets Sunday, hoping to pressure local officials into taking a stand against the new national security law.

Despite not being given official authorization by the government, and social distancing restrictions banning gatherings of more than eight people, several thousand demonstrators gathered in the shopping district of Causeway Bay, alongside heavy police presence. There, they reportedly chanted many slogans, including “Fight for freedom, Stand with Hong Kong,” “Revolution of our time. Liberate Hong Kong,” and “Hong Kong independence, the only way out.” Some of them displayed blue, pro-independence flags.

But the Guardian reports the atmosphere was unusually strained: “In contrast to marches and rallies last year, demonstrators had been visibly tense in anticipation of a harsh police crackdown.”

And a crackdown did indeed come. According to CNN, when challenged by law enforcement officials, some protesters claimed the gathering was an authorized “health talk,” but the police were unpersuaded, and quickly declared the protests illegal. When crowds began peacefully marching up Hennessy Road, police shot tear gas at them.

Despite this resistance from the police and the arrests that followed, many protesters said the demonstration was worth the risk, arguing that Hong Kong’s semi-autonomous status is in serious jeopardy.

“I witnessed several decades of the Chinese Communist party’s misdeeds, I escaped to Hong Kong [from mainland China] 40 years ago,” a 75-year-old protester who called himself Mr. Hui, told the Guardian. “Now they have completely ruined Hong Kong. I am here to protect my home. We’re the real patriots, not the Communist party.”

The National People’s Congress announced a forthcoming national security law on Thursday. According to CNN, the law is expected to “ban sedition, secession and subversion against Beijing” and will for the first time allow mainland Chinese national security agencies to deploy in Hong Kong. Notably, the law is expected to pass through “a rarely used constitutional method” that circumvents Hong Kong’s government altogether.

Experts say Beijing’s new policy could deal a lethal blow to the “one country, two systems” rule under which Hong Kong has operated since the British returned the city to China in 1997. The rule has allowed Hong Kong certain liberties, like a greater right to free expression and an independent judiciary, not extended to most of China’s population.

“It is an official death sentence for Hong Kong; it’s nothing less than that,” Alvin Y. H. Cheung, an affiliated scholar at NYU’s US-Asia Law Institute, told Vox earlier this week.

As Vox’s Jen Kirby has explained, the law’s approval could have a number of effects on Chinese political life:

The law could have the chilling effect on dissent that China desires, snuffing out all but the most extreme protests. The opposite also seems possible: that China’s actions — proof positive of why many Hongkongers felt they had to continue to protest — might escalate tensions even more.

But China’s incursions may make it harder for pro-democracy Hongkongers to advocate for a more moderate stance. “They will eventually be pushed to become either totally pro-Beijing agenda or pro-confrontational protesters,” [Ho-Fung] Hung, [professor of political economy at Johns Hopkins], noted. “It’s the disappearance of the middle ground and really will become more polarized.”

Beijing has made it clear it hopes the law will indeed end the protests. But Sunday’s demonstration suggests the movement may not dissolve as quickly as party officials might hope.

The movement gained strength during Hong Kong’s 2019 demonstrations that began in opposition to a controversial extradition bill, which would have allowed Hong Kong citizens to be extradited to mainland China. Over time, however, the demonstrations evolved into a broader call for greater political freedoms in the city, such as universal suffrage to elect Hong Kong’s leaders.

Those protests occurred regularly and sometimes were massive — at their height, they involved millions of demonstrators. And while largely peaceful, they became increasingly violent over time. The protests garnered international attention, and managed to convince Hong Kong’s legislature to formally scrap the extradition bill that kicked off the unrest.

Now it appears Beijing hopes to avoid local political considerations and use the power of the national government to both reshape its relationship to Hong Kong and fundamentally change the landscape of dissent in the territory.

China’s government has defended the new national security law as necessary, saying protests last year posed a national security threat to the country. On Sunday China’s foreign minister, Wang Yi, said the law should pass “without the slightest delay,” and promised it would be used to crack down on a “very narrow category” of acts, not any anti-government dissent.

But many experts and critics outside of China see the law as a way to justify broad crackdowns, and as a blatant power grab by Beijing.

And the Trump administration has condemned the announcement of the law in strong terms.

“The United States strongly urges Beijing to reconsider its disastrous proposal, abide by its international obligations, and respect Hong Kong’s high degree of autonomy, democratic institutions, and civil liberties, which are key to preserving its special status under US law,” Secretary of State Mike Pompeo said in a statement on Friday.

That special status is now governed by the Hong Kong Human Rights and Democracy Act, which was approved by Trump in 2019. According to the act, the State Department needs to certify at least once a year that Hong Kong retains enough autonomy from mainland China to maintain its special trading partner status with the US.

Trump’s national security adviser Robert O’Brien said Sunday on Meet the Press that certification is now in danger — and that it is likely “there will be sanctions that will be imposed on Hong Kong and China” if the law passes.