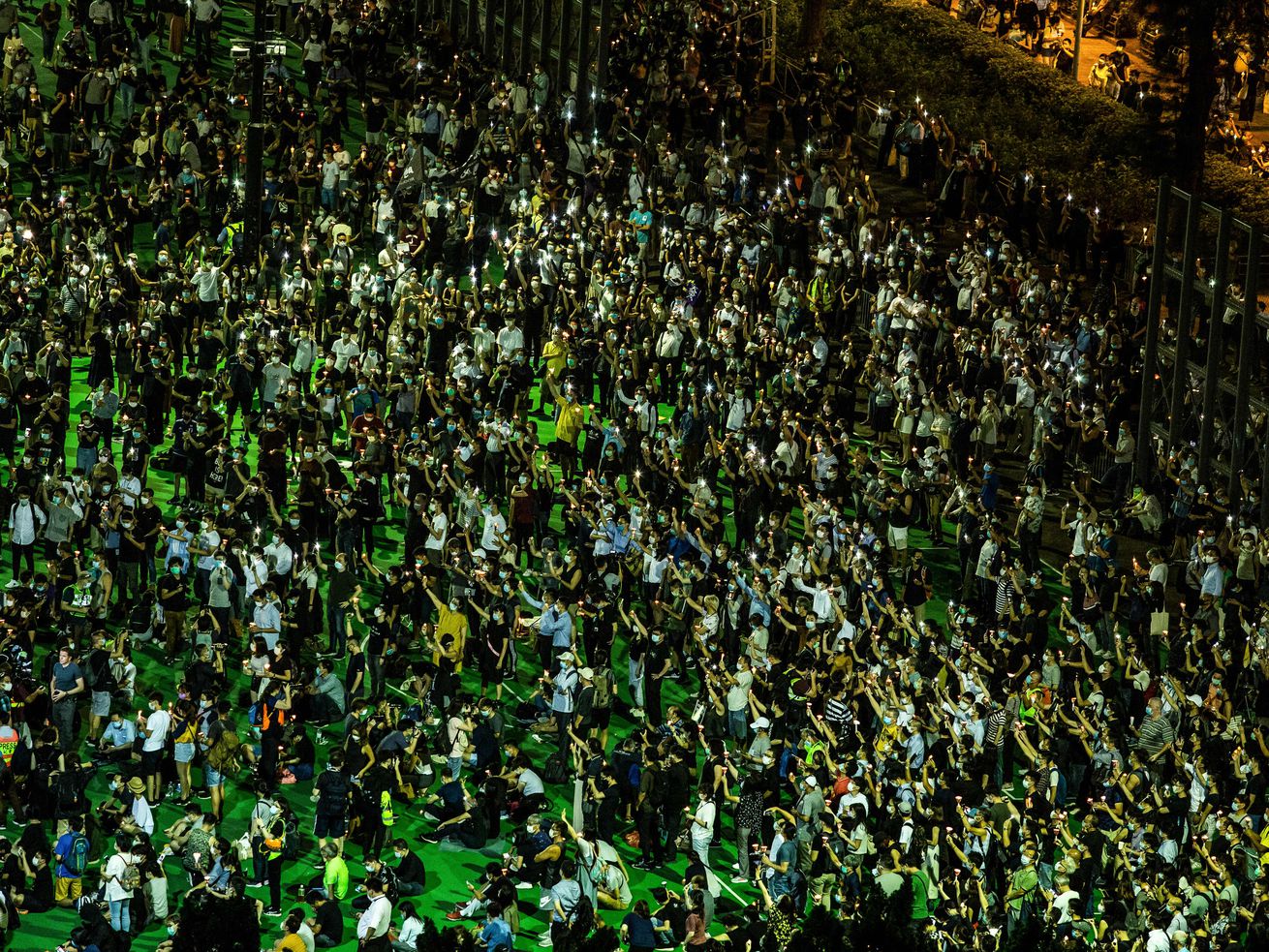 Activists participate in a candlelit remembrance outside Victoria Park in Hong Kong on June 4, 2020. | Isaac Lawrence/AFP via Getty Images

Coronavirus restrictions and China’s encroachment on the territory changed the annual vigil.

Thousands of people in Hong Kong defiantly commemorated the Tiananmen Square massacre on Thursday, holding a vigil despite a police ban as the territory witnesses Beijing stamp out its freedoms in real time.

Each year, the pro-democracy protesters killed by Chinese government forces on June 4, 1989, are honored in Hong Kong — one of the few places in China, along with Macau, where the day is usually allowed to be recognized. China has tried to erase and rewrite the history of the massacre, and in the mainland, little is known of how the Chinese military crushed the democracy movement.

But this year, for the first time, Hong Kong authorities refused to grant a permit for the candlelight vigil, which is traditionally held in Victoria Park. The reason given was the coronavirus: Mass gatherings of more than eight people are restricted under current social distancing rules. However, many other restrictions have been lifted in Hong Kong, and the territory has very few cases — on June 4, the government reported six infections; the day before, zero. (Activists in Macau were also denied a permit.)

But thousands of Hongkongers gathered on June 4 anyway outside of Victoria Park, which had been barricaded off by police. Many tried to observe social distancing rules by sitting or standing apart as they chanted pro-democracy slogans and, in some instances, rallied for Hong Kong’s independence from China, once a radical idea.

Instead of “End to the one-party dictatorship!” “Vindicate June4th!”

Attendees of the vigil are now chanting:
“Liberate Hong Kong, revolution of our time!”
“Five demands, not one less”
“Hong Kong independence, the only way out!” pic.twitter.com/t1ni7aP3C5

Defying a government ban and threats to prosecute attendees, thousands of people in Hong Kong have shown up at a Tiananmen vigil (but are still social distancing) pic.twitter.com/UY7eZeQhup

Others brought candles to other parts of the city, as organizers of the vigil had encouraged Hongkongers to “light a candle wherever they are.”

People in every corner of #HK marked #June4 with candlelight, defying police ban on candlelight vigil in Victoria Park (where thousands came out regardless). This is the #HK spirit of the resistance of ordinary people that one day will prevail. #6431truth pic.twitter.com/EPz9VBex4N

“We fight for the same things as they did [in Tiananmen Square] 31 years ago,” 24-year-old Hammond Tong told the Washington Post. “The Chinese Communist Party has not changed one bit — the oppression, suppression and persecution have only increased. We must not forget, nor can we stop fighting.”

The vigil this year, even in its more fragmented form, has added weight as China moves to undermine the “one country, two systems” framework, which allows Hong Kong to have a degree of autonomy for its democratic system, and freedoms of press and speech not afforded to the rest of mainland China, until at least 2047.

China has long been trying to pull Hong Kong closer into its orbit. Shortly after last year’s Tiananmen Square vigil, Hong Kong erupted into protests against a controversial extradition bill that many saw as an attempt by Beijing to restrict Hong Kong’s freedoms. The first massive protest, on June 9, kicked off nearly a year of sustained pro-democracy demonstrations in the territory, which only died down earlier this year because of pandemic fears.

But last month, Beijing passed a national security law intended to curtail foreign interference or activities that undermine the state. Many critics say that Beijing — and officials in Hong Kong — are likely to interpret that broadly, which could potentially criminalize any dissent or perceived resistance to China. And that would almost certainly include Hong Kong’s protesters.

The passage of the law sparked massive resistance once more, as thousands defied lockdown measures to protest against the legislation.

But Hong Kong’s future, and its freedoms, are perhaps more precarious than they’ve ever been.

On Thursday, Hong Kong’s mostly pro-China legislature voted to adopt a law that would make it illegal to mock or disrespect China’s national anthem, with penalties of up to three years in prison. The bill would also allow police to investigate violations for up to two years, the Wall Street Journal reported, giving authorities time to scour social media for videos and images of large crowds.

The crowd at the vigil sang “Glory to Hong Kong” — the unofficial anthem of the Hong Kong protests — in apparent defiance of the new law.

The crowd chants for democracy and sings the protest anthem Glory to Hong Kong. pic.twitter.com/3CiPmS6Xwp

The international community has condemned China’s move. But unrest in the US is complicating the message.

China’s national security law has not yet been implemented, but when it is, many fear it could chill protests and even mark the official end of gatherings like the Tiananmen Square vigil, which Beijing seems determined to stop.

Which is why this year’s vigil almost became not only about the pro-democracy activists who died in 1989 but also about Hong Kong, both its past and its future. Amid China’s aggressive moves to assert authority over the territory, calls for Hong Kong’s independence are growing louder, as pro-democracy advocates see dwindling options to preserve its autonomy.

And the international community may not be much help. The United Kingdom, which once controlled Hong Kong, has promised to expand the number of Hongkongers who can come to Britain with visas — a move that many advocates support, but that will do little to save Hong Kong’s institutions.

The United States has announced it will consider revoking Hong Kong’s special trade status because it is no longer fully autonomous from China, a move that could damage Hong Kong’s position as a global financial capital. That special status once deterred China from taking too heavy a hand in Hong Kong — though that has changed, too, as Hong Kong’s economic importance to China has diminished. But now there may be even less reason for China to rhetorically honor “one country, two systems.”

America’s rebuke of China for “absolutely smothering” the freedoms of Hong Kong also rings hollow amid America’s own unrest.

President Donald Trump is still considering sending active-duty military forces to help control the George Floyd protests taking place across the country, which have been largely peaceful and, in some egregious instances, met with force. The Chinese government has pointed out the hypocrisy of US lawmakers who criticized Hong Kong police for cracking down on and tear-gassing protesters while the same thing happens in American cities — including in Washington, DC, where peaceful protesters were cleared with chemical irritants to make way for a presidential photo op.

This is especially stark on the anniversary of the Tiananmen Square massacre. Some US lawmakers who have been highly critical of China’s military response to pro-democracy protesters have openly advocated for using the US military to control protests on American streets.

That disconnect will make it harder for the US, and the rest of the world, to take meaningful action to protect Hong Kong — and to keep honoring, as Hongkongers tried to do today, what happened in Tiananmen Square three decades ago.