IT WOULD be easy to make England’s homecoming a sentimental affair.

Pick the 23 players who went to the World Cup for a lap of honour around Wembley on September 8 against Spain and let them soak it all up.

Gareth Southgate’s men have earned a pat on the back, the right to feel the warmth of the country on home turf again after making it to the semi- finals in Russia.

The dilemma for the England coach as he prepares to name his squad on Thursday for their opening Uefa Nations League tie with Spain, is that so few of them are starting Premier League games.

Of the 23 men good and true that Southgate took to the World Cup, six have yet to make an appearance in the top flight this season.

In some cases, they are not even involved in the matchday squad.

Last weekend, when Chelsea beat Arsenal 3-2 at Stamford Bridge, Maurizio Sarri did not include Cahill or Ruben Loftus-Cheek, who got 22 minutes as a sub at Huddersfield the week before, in his squad.

Defender Jones, who played both games against Belgium over the summer, has not been used by Jose Mourinho in Manchester United’s opening two fixtures. 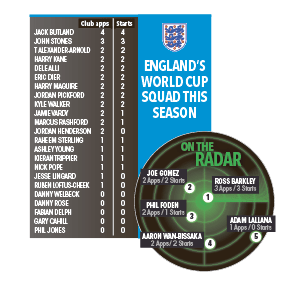 Further up the field Marcus Rashford lost his spot in the United side for their shocking 3-2 defeat at Brighton and his buddy Jesse Lingard played just the second half.

The lack of game-time for England’s players, especially after a successful World Cup, is alarming.

The alternative is to freshen it up, for Southgate to bring in some players who are in form and in favour with their club managers.

That poor Manchester City kid Phil Foden is being talked up so much after a promising Community Shield.

But his League season consists of an eight-minute substitute appearance against Huddersfield. City were already 5-1 up when he came on.

Others have made a stronger case. Joe Gomez, immaculate in Liverpool’s opening two Premier League fixtures, is an obvious replacement for Jones.

Injury robbed Gomez of a World Cup spot but his game has come on again after taking Dejan Lovren’s place at the heart of Liverpool’s defence alongside Virgil van Dijk.

Adam Lallana, a stand-by for the World Cup, is another of the England coach’s favourites as he contemplates tweaking his squad for the two games with Spain and Switzerland.

Southgate was at Crystal Palace on Monday, monitoring Jordan Henderson’s return as a Liverpool substitute, along with Gomez and Lallana.

Although it is only a matter of time before his first senior call, it is too soon to dislodge Kieran Trippier and Kyle Walker.

Southgate is determined to build on England’s journey to the World Cup semi-final but he needs the players to work with to be able to compete with the elite nations.

He will have his say on this again next week, urging Premier League clubs to promote English talent as part of his strategy for success.

Without it, the love for this England side will soon wear off.

most read in football

Gat’s in the cradle

Spurs in right Cara on

THE idea Tottenham can swan off to a THIRD stadium to play Carabao Cup games is another smack in the face to their fans.

A home ground is supposed to be sacred — a place of worship for supporters and a competitive advantage for the players.

There will be nothing special if they run out in the League Cup, 56 miles up the road at Milton Keynes.

Spurs are turning into a franchise football club, picking and choosing where they play depending on interest in their fixtures.

Taking Spurs on the road for the League Cup sets a risky precedent.

But the Football League will do anything to ensure the big clubs’ continued presence in their struggling competition.
Now that’s a sell-out.

Real get it so Ron with fans

WHEN you start messing around with times of fixtures and sell your star player — the fans soon turn their backs.

Real Madrid’s first home game since they won their third successive European Cup in May was watched by 48,446 — their lowest La Liga attendance since 2009 — at the Bernabeu last Sunday.

They beat Getafe 2-0 after kicking off at 10.15pm, adjusting to life without Cristiano Ronaldo and under their new head coach Julen Lopetegui.

La Liga, facing a revolt over plans to play games in the US, need to keep interest in their clubs alive at domestic level.

Finishing games after midnight is no way to do it.

IT wouldn’t take someone with a hammer and a good sense of humour two seconds to put West Ham’s honours board back up at the London Stadium.

Stadium owners London Legacy Development Corporation thought they did the club a favour when they took it down during the Athletics World Cup, now they’re in a petty dispute over its prominence.

With all the trophies to reminisce over, the last a momentous Intertoto Cup triumph over Metz in 1999, that sort of stuff should be pride of place.

PAUL MITCHELL’S interest in the director of football role at Old Trafford has already set tongues wagging about Mauricio Pochettino.

Mitchell took up a post at RB Leipzig in February, but he is on Ed Woodward’s list as Manchester United scour the world to fill this influential position.

Poch, who turned down the United manager’s job in 2016 before Jose Mourinho took charge, remains good friends with Mitchell following his time as recruitment director at White Hart Lane.