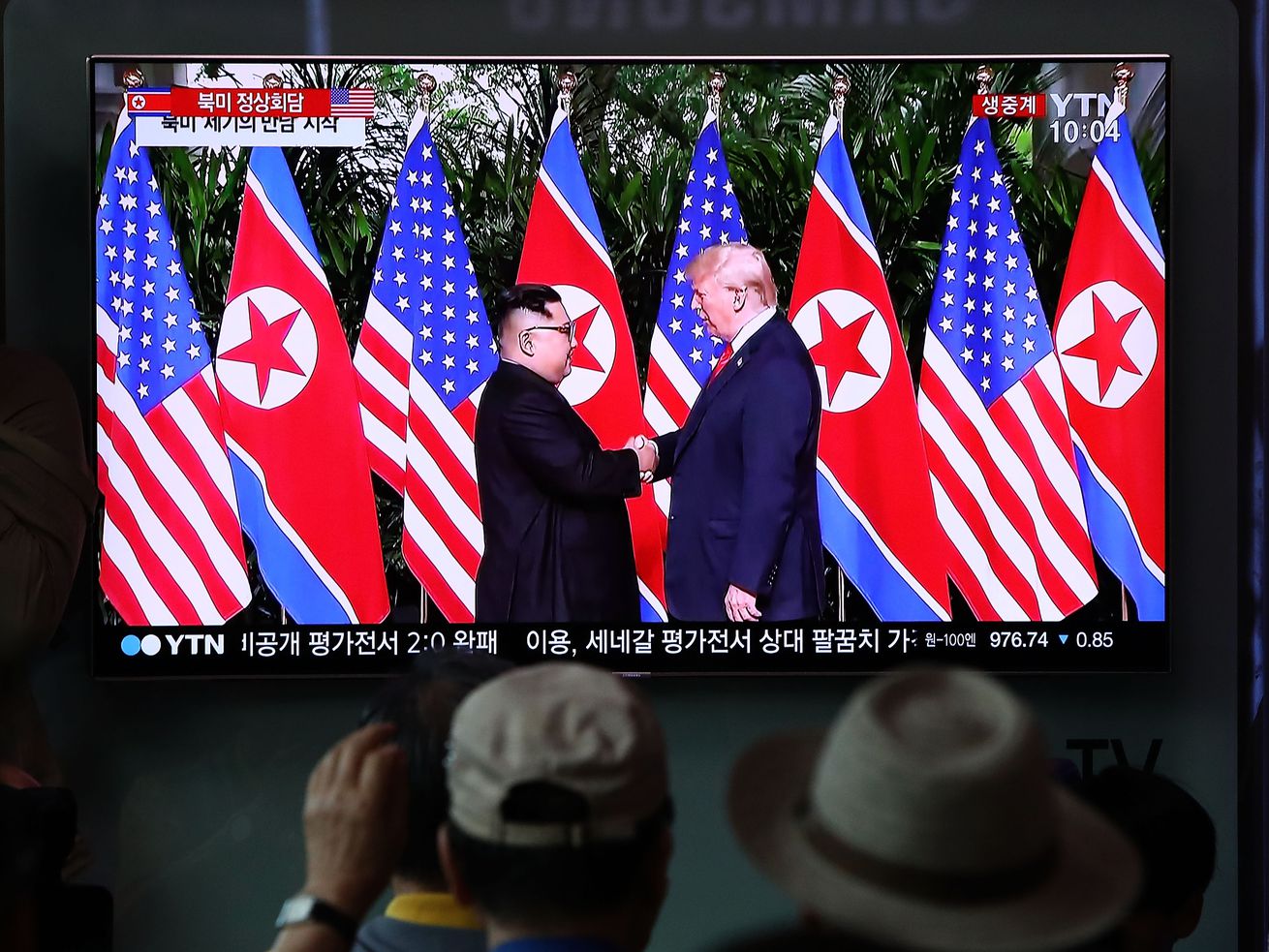 He hasn’t followed through yet — and North Korea talks may have stalled because of it.

President Donald Trump told North Korean leader Kim Jong Un during their Singapore summit in June that he’d sign a declaration to end the Korean War soon after their meeting, according to multiple sources familiar with the negotiations.

But since then, the Trump administration has repeatedly asked Pyongyang to dismantle most of its nuclear arsenal first, before signing such a document.

That decision is likely what has led to the current stalemate in negotiations between the two countries — and the increasingly hostile rhetoric from North Korea.

“It makes sense why the North Koreans are angry,” one source told me. “Having Trump promise a peace declaration and then moving the goalposts and making it conditional would be seen as the US reneging on its commitments.”

Fighting ceased in 1953, but the warring parties only signed an armistice — a truce — which means the war technically continues to this day. Both Koreas still have troops and weaponry at or near the border, known as the Demilitarized Zone. This is one major reason North Korea has oriented its foreign policy around how to deter a future attack by the United States and South Korea, mostly by developing a strong nuclear program that includes around 65 nuclear warheads and missiles that can reach all parts of the US mainland.

But during a New Year’s Day address, Kim noted that he wanted to focus more on improving his country’s economy, which is one of the world’s poorest. To do so, experts tell me, Kim needs a peace declaration to end the Korean War. This would provide political cover for him to denuclearize part — or, less likely, all — of his arsenal.

Without that declaration, any concession Kim makes to Trump could make the North Korean leader look like he’s capitulating to a sworn enemy. A signed peace declaration between the US and North Korea would not legally end the war, experts say, because it wouldn’t be a full treaty and probably wouldn’t include China, which defended North Korea during the war.

But a declaration would be formal enough that both leaders could say the hostilities officially ended. Kim in particular believes he needs the declaration first to avoid criticism from North Korea’s military, a top South Korean official told the Atlantic on Wednesday.

According to two people familiar with Trump and Kim’s discussions in Singapore during the June 12 summit, Trump promised the North Korean leader that he’d sign a peace declaration soon after they met. (The two sources requested anonymity to discuss sensitive negotiations.) It’s still unclear whether Kim requested this or if Trump brought it up, and whether Trump promised to sign the declaration by a certain date.

A source also noted that North Korea believes Trump made the same promise to Kim Yong Chol, a top North Korean official close to Kim Jong Un, at the White House on June 1 — 11 days before the summit.

That tracks with Trump’s comments during a press conference in Singapore after meeting with Kim. “What we signed today had a lot of things included. You had things that were not included that we got after the deal was signed,” he said in response to a question about whether both leaders had discussed a peace agreement.

When contacted about this story, the White House declined to comment.

It’s very likely that other parties to the war, mainly South Korea, would sign on to a peace declaration. Both Koreas have openly stated that they hope for a signed agreement by the fall, and have set a year’s end deadline. South Korean President Moon Jae-in has even presented Washington and Pyongyang with a potential four-point declaration plan, according to the Atlantic.

So it seems like Kim took Trump at his word in Singapore. And in the agreement Kim and Trump signed after their summit, two items about establishing peace between the two countries came before a denuclearization commitment, which helps explain why North Korea thinks a peace declaration should come before nuclear concessions.

But Secretary of State Mike Pompeo has repeatedly asked Pyongyang to hand over 60 to 70 percent of its nuclear warheads within six to eight months.

That pressure angered Kim, a source told me, since the North Korean leader believes he was promised that a signed declaration would come before any nuclear concessions — which may be the reason statements from Pyongyang about nuclear talks have turned increasingly antagonistic.

On August 9, North Korea’s foreign ministry issued a scathing statement accusing some unnamed members of the Trump administration of “going against the intention of president Trump.” (It’s clear from the statement that Pompeo is one of the targeted administration members.)

US officials also told Reuters on the same day that the North Koreans “view Trump as [having] a softer touch.” When a July meeting between Pompeo and his North Korean counterparts hit a snag, the North Korean negotiators asked Pompeo to step outside and called Trump directly instead, the officials added.

Trump’s comment during the Singapore summit helps explain why North Korea is so furious: To Pyongyang officials, it probably looks like the president made a promise and the secretary of state isn’t keeping it.

Last Friday, Trump canceled Pompeo’s trip to Pyongyang, which was scheduled for this week, because North Korea sent an angry letter — but also noted he looks forward to meeting with Kim again.

The irony is that reports in the South Korean press suggest Pompeo was about to offer North Korea a deal: The US would sign the peace declaration and North Korea would hand over a partial list detailing components of its nuclear program.

It’s unclear, though, if the US was actually willing to make that deal.

There’s resistance to Trump signing a declaration within the administration

Harry Kazianis, a North Korea expert at the Center for the National Interest think tank in Washington, said he thought Trump’s apparent willingness to sign a declaration to end the Korean War is a good thing.

“I would argue Trump had every reason to offer to sign — and most likely brought up first — the idea of a Korean peace declaration,” he said. “It would be a legacy builder, something Trump could always say he was part of, something clearly in the win column for his administration. It’s also something North Korea has been wanting for decades and clearly something South Korea would support.”

But top officials in the Trump administration, like National Security Adviser John Bolton and Secretary of Defense Jim Mattis, have argued against the president signing such a declaration.

There are two major reasons why. First, the US wants to ensure North Korea is serious about dismantling its nuclear program — that’s why Pompeo is pushing so hard for Pyongyang to give up much of its nuclear arsenal up front. North Korea has lied in past negotiations about its willingness to part with its warheads, so it’s understandable why the administration would be so skeptical.

Second, it’s possible North Korea would then push for the withdrawal of America’s 28,500 troops from South Korea. Trump might agree to that because he’s openly questioned why the US still maintain a troop presence on the peninsula.

A staunch US ally, South Korea relies on American military support to defend against the military threat from Pyongyang. Both Bolton and Mattis would want to see the peace continue between the two Koreas after signing a declaration. It makes sense, though, that US security officials would worry about pulling troops from the Demilitarized Zone or doing anything that would make US allies in East Asia skittish.

The State Department, according to the Washington Post, is fine with signing a peace declaration, as it falls short of an actual formal, legally binding peace treaty.

At this point, based on the current status of negotiations, it seems the Bolton-and-Mattis camp has won. But unless the US or North Korea make some sort of concession, the talks will likely continue to stall. And if that happens, Trump may choose to scrap talks altogether — and reconsider his military options.