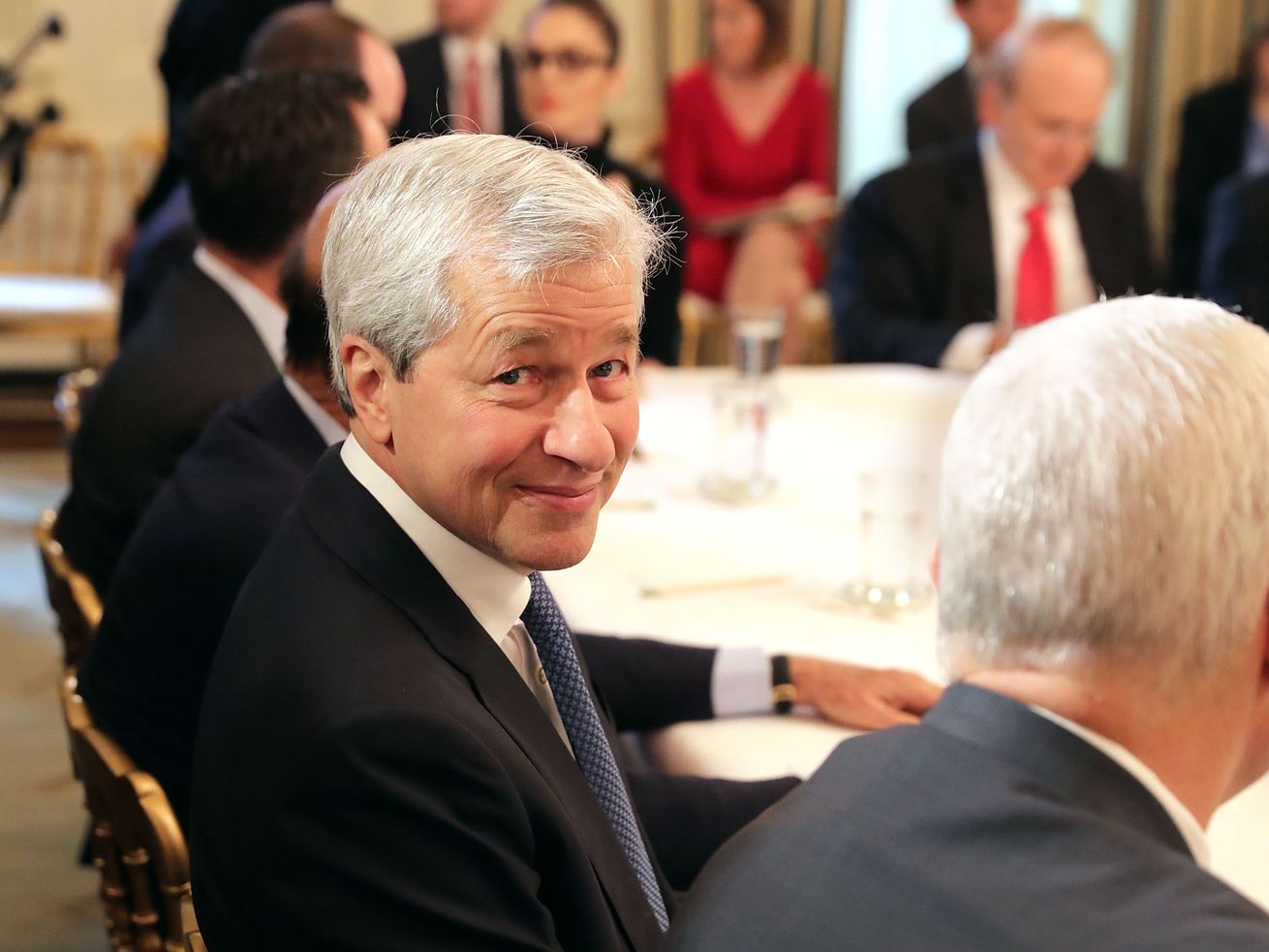 Jamie Dimon may be a Democrat, but he and Republican President Trump have a lot to gain from one another, policy-wise.

It’s been a real journey for President Donald Trump and JPMorgan CEO Jamie Dimon in recent years, and this week, the billionaires’ back-and-forth continued, with the bank executive initially declaring he thinks he could beat the president in the 2020 election and then later backing off. Trump, of course, responded on Twitter.

It all began when Dimon at an event in New York this week said he thinks he could defeat Trump. “Because I’m as tough as he is, I’m smarter than he is,” he said on Wednesday. “I would be fine. He could punch me all he wants, it wouldn’t work with me. I’d fight right back.”

He wasn’t so confident about his abilities against potential progressive opponents. “I can’t beat the liberal side of the Democratic Party,” he said.

Dimon’s comments almost immediately swept across the financial and political news media, and he quickly backtracked. About an hour after his original remarks, according to CNBC, Dimon said the outburst “proves I wouldn’t make a good politician” and said he wasn’t running for president.

If Trump caught the walk-back, it didn’t deter his reaction — he lashed out at Dimon on Twitter on Thursday. The president launched a series of insults at Dimon, describing him as a “poor public speaker” and “nervous mess” who doesn’t have the “aptitude” or “smarts” to run for president. “Otherwise he is wonderful,” Trump wrote.

The problem with banker Jamie Dimon running for President is that he doesn’t have the aptitude or “smarts” & is a poor public speaker & nervous mess – otherwise he is wonderful. I’ve made a lot of bankers, and others, look much smarter than they are with my great economic policy!

Dimon’s mea culpa continued over the weekend: In an interview with ABC News’ Rebecca Jarvis aired on This Week on Sunday, Dimon said he “shouldn’t have said” what he did and blamed his remarks on “frustration and a little of my own machismo.” He also ruled out a 2020 run.

The dustup might make you think that Dimon and Trump are longtime enemies, but their dynamic is actually a lot more complicated than that. The pair are at some moments friends and at others foes, and despite their personality clashes, they actually have a lot to gain from one another policy-wise.

Dimon, 62, has deep ties to the financial and banking industry. He was named CEO of JPMorgan in 2005 and chairman and president in 2006 and is also chairman of the Business Roundtable, a powerful lobbying group of corporate CEOs. His net worth is an estimated $1.4 billion.

He has an inconsistent relationship with politics. He once described himself as “barely a Democrat” and has often criticized the party for being too harsh on business. The New York Times in 2009 called Dimon “President Obama’s favorite banker,” and the Wall Street Journal described their “high school romance.” There was speculation Dimon might join the Obama administration, and the president praised Dimon for “managing an enormous portfolio” during the financial crisis.

But the pair’s relationship later frayed, with Dimon complaining that financial regulations post-crisis had gone too far, and Obama needing to distance himself from the banking industry.

“I’ve gotten disturbed at some of the Democrats’ anti-business behavior, the attacks on work ethic and successful people,” Dimon said in a 2012 interview on NBC’s Meet the Press. “I think it’s very counterproductive.”

Dimon expressed similar frustration with Democrats and Hillary Clinton in 2016 after the then-presidential nominee criticized Wells Fargo over its fake accounts scandal. She said it was “outrageous” that after the crisis “powerful bankers [are still] paying fast and loose with the law.” Dimon took exception with being lumped in with Wells Fargo, saying it was “unfair” for her to “blanket a whole class of people.”

That didn’t stop Dimon from thinking she’d win the election. Prior to the 2016 contest, Dimon predicted Hillary Clinton would win, as did, of course many others.

But Dimon’s prediction didn’t alienate him from Trump-world, nor did he seem particularly upset about Trump’s victory.

Trump’s transition team reportedly approached Dimon about the possibility of becoming treasury secretary in the new administration, which Dimon declined. Trump tapped Dimon and multiple other executives to join his strategic advisory forum, which disbanded after the president’s Charlottesville remarks in 2017.

After Trump’s inauguration, Dimon said that the president’s economic agenda had “woken up the animal spirits” in the markets and advised others to “forget the tweets” and focus on tax cuts and deregulation.

Trump and Dimon serve one another policy-wise

The thing about Trump and Dimon is that whether or not they like other another personally — or are just exchanging jabs — in terms of public policy, they’ve got quite a bit in common. Wall Street likes what Trump is doing in terms of tax cuts, deregulation, and economic stimulus, and Trump likes the positive feedback he gets from business and markets.

Corporations have been a major beneficiary of the Republican tax bill passed in 2017, which cut taxes for most Americans, including the middle class, but heavily benefits the wealthy and companies. It slashed the corporate tax rate from 35 percent to 21 percent. Trump also signed a banking deregulation bill in 2018 that adjusts parts of the Dodd-Frank financial reform.

Banks, including JPMorgan, have reaped the rewards. Bank profits reached a record $60.2 billion in the second quarter of 2018, with half of the year-over-year increase attributable to tax cuts. In the first quarter of the year, JPMorgan made $8.7 billion — the largest one-quarter profit by an American bank ever.

In his annual letter to shareholders, JPMorgan CEO Jamie Dimon lauded the tax bill as “historic” and applauded Congress for showing “we can take on tough issues that have been holding us back.” And JPMorgan joined other corporations in rolling out big tax-based investment announcements after the tax cuts passed, announcing wage boosts and 4,000 new hires in January.

Dimon has criticized Trump where the president’s actions aren’t good for him — or, potentially, the country. He has publicly worried about the president’s trade tactics and pushed for action on infrastructure and education, and after Charlottesville, he publicly rebuked Trump.

But there’s plenty about Trump he seems to like. Remember that Trump tweet from August where the president called for an end to quarterly reporting on Wall Street? Dimon and Berkshire Hathaway CEO Warren Buffett had previously criticized the US system in a June op-ed, though they called for an end to companies providing earnings guidance, not quarterly reporting overall.

Dimon in the ABC News interview on Sunday acknowledged the pair’s awkward dynamic, that there’s some good and some bad in there:

You know, when President Trump was elected, confidence skyrocketed, consumers, small business, large corporate and because pro-business, pro-competitive taxes, pro some regulatory reform — and that has helped the economy. So it’s impossible for me to tease out how much but it has helped the economy. Just like that President Obama helped to stop the economy from getting much worse. But they also did policies I think that slowed down growth. Some of those are being reversed. Yeah, he should take some credit for that.

It’s not clear what Dimon is seeking in his latest round of comments on Trump — it may be, as he says, that he just caught a case of “machismo” and got heated in the moment. And it’s not the first time he hinted at some political aspirations. In January, he talked about Democrats’ need for a “strong centrist, pro-business, pro-free enterprise” candidate to take on Trump in 2020 — which, as Vanity Fair’s Bess Levin pointed out, sounds an awful lot like Dimon himself. Dimon told Jarvis he was ruling out running for president — for now.

Dimon and Trump have been on one another’s radars for a while, with Trump even tweeting about Dimon multiple times, some positive, some not. They’re both native New Yorkers, both very rich, and both appear to have the egos accompanying that.

“This wealthy New Yorker actually earned his money,” Dimon, pre-apology, said on Wednesday, pointing to himself. “It wasn’t a gift from Daddy.”