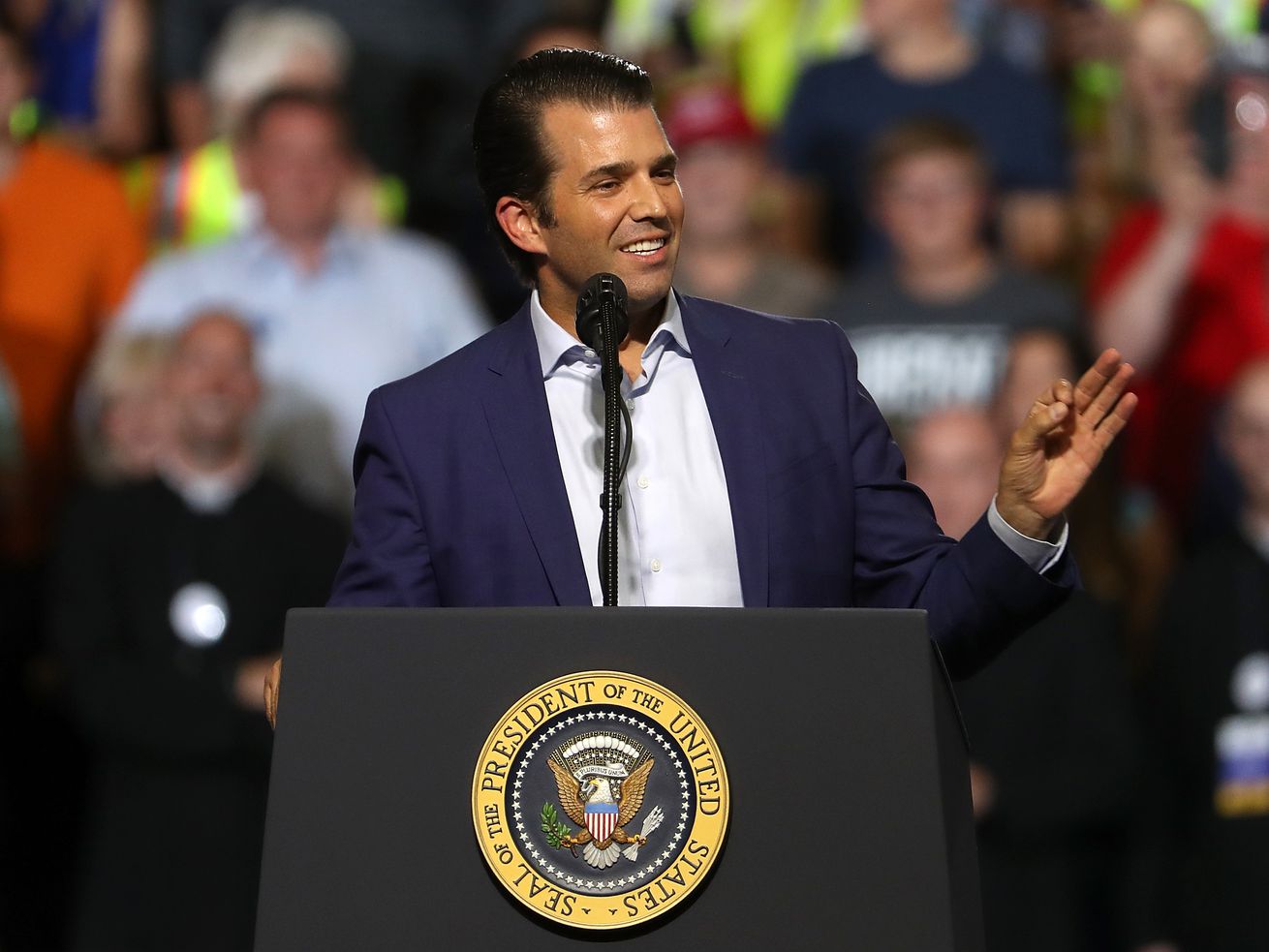 The president’s son and others are attacking CNN’s Hurricane Florence coverage — with a picture from Hurricane Ike in 2008.

CNN journalist Anderson Cooper has had it with conspiracy theories — or at least the one being propagated by the president’s son Donald Trump Jr. as Hurricane Florence slams parts of the country.

On Sunday, Trump tweeted a picture of Cooper standing in waist-deep floodwater, saying that CNN’s ratings would go up if they “stop lying” to make the president look bad.

Gavin Smith, a former Trump administration official, followed suit and tweeted out another picture of Cooper in the same scenario. “Absolutely disgraceful!” he wrote. “Apparently [Hurricane Florence] wasn’t enough” for Cooper, “so he had to exaggerate for his live shot.” Smith declared the situation fake news.

Except the pictures Trump and Smith were tweeting weren’t from Hurricane Florence — or from this decade. The pictures were taken when Hurricane Ike hit Texas in 2008.

It’s a shame that CNN’s ratings are down 41%. What’s worse is there’s a simple solution that they refuse to accept. Stop Lying to try to make @realDonaldTrump look bad. https://t.co/O3XyWchsJh pic.twitter.com/BCUCxKnOvO

Absolutely disgraceful! Apparently #HurricaneFlorence wasn’t devastating enough for @CNN’s @andersoncooper — so he had to exaggerate for his live shot. #FakeNews at its finest! pic.twitter.com/9pUJ6Ulgqf

Cooper spent about eight and a half minutes on his show, AC360, on Monday responding to the attack and defending himself and his network’s coverage.

He then explained the actual circumstances of the pictures being tweeted out. He was in Texas during Hurricane Ike in 2008, which left many people trapped on the roofs of their homes and surrounded by water. Then-Texas Gov. Rick Perry called the aftermath the “largest rescue operation” in the state’s history,

The anchor also hit back at a suggestion from another Twitter user that he had been kneeling in the floodwaters shown in Trump’s picture to make them appear deeper, calling the idea “frankly idiotic” and showing a clip of himself talking about how the water was receding: “I’m not trying to play up how bad it is, I’m pointing out that the water is actually lower than it was earlier in the day.” (He also pointed out that the Twitter user had said he was “used to being on my knees,” likely “some sort of anti-gay reference.”)

Cooper played back multiple clips from the 2008 broadcast. He acknowledged that it’s “easy to make fun of someone standing in water reporting” and showed a clip of the broadcast where he was even making fun of himself.

“I don’t expect the president’s son to ever admit he was wrong, or one of the president’s former advisers, or, frankly, anyone else who’s retweeted these pictures,” he said. “But I at least thought that they and you should know the truth.”

Cooper closed by saying that Doug Thomas, the camera operator who appears in the photos, was a CNN audio technician who died in 2017.

At the top of the segment, Cooper noted that he’s been the subject of numerous conspiracy theories over the years, and he usually lets them go unanswered.

Conspiracy theorist Alex Jones claimed that Cooper didn’t go to Sandy Hook Elementary School after the shooting there and that an interview filmed with one of the victims’ parents was fake. (Over the weekend, Jones also hopped onto the Cooper-faked-Florence conspiracy train.) On Monday, Cooper also mentioned accusations that he had used a child he was helping as a “human shield” in Haiti. “I don’t really know what to say to that ridiculous idea,” he said.

“I debated whether I should even respond tonight to the president’s son,” he said, whom he at one point called “Donny Jr.” He continued, “I know he considers himself an outdoorsman and pays a lot of money to be led to wildlife in Africa that he then kills. But I’m not sure if he’s actually been to a hurricane or a flood. I didn’t see him down in North Carolina over the last few days helping out, lending a hand, but I’m sure he was doing something important besides just tweeting lies.”

Trump’s reaction to Cooper’s response wasn’t to offer up some sort of apology or explanation but instead to attack. He sent out multiple tweets pointing out that he never explicitly said the picture was from 2008 and that he had tweeted a link to a Breitbart story saying CNN’s ratings had dropped by 41 percent. But in including the hurricane picture, a Florence reference appears to be what he was implying — why would CNN have been trying to harm his father with its hurricane coverage in 2008, when George W. Bush was president?

“You guys can’t even fact check a meme,” Trump tweeted. He said his initial tweet had “nothing to do” with Florence.

CNN doing what they do best.
Crying & Lying.@AC360 says I said it was a pic from Florence
Isaid no such thing.

The illusion created by the pic is illustrative of the bs you sell! https://t.co/wnRSns1Thf

This is the latest chapter in the ongoing battle between the president’s team, including his son, and the media. President Trump regularly decries coverage he doesn’t like as “fake news” and has declared the press the “enemy of the people.”

And Donald Trump Jr. seems to be a happy warrior for his father against the media and, specifically, CNN.

Strange that I’m not seeing this on CNN. https://t.co/QWPEkWTCO6

Can someone confirm if this is a real CNN headline or not? I can’t tell anymore. pic.twitter.com/A1RSQGpLFc

This is @CNN. Quadrupling down when even the likes of buzzfeed and the Amazon WaPo have acknowledged the story was #fakenews. Ballsy… Stupid, but ballsy. You do you CNN. https://t.co/LKNbxY4DGL

Trump Jr. has flirted with conspiracy theories in the past. In February, he was slammed for “liking” conspiracy theories about the school shooting in Parkland, Florida. He’s also backed Jones’s claims that “big tech” is out to get conservatives and retweeted Roseanne Barr’s anti-Semitic remarks.

It’s not clear why he has picked this latest battle with CNN, or why Cooper chose to fire back this time, specifically. It’s almost as though it’s the season for hurricane conspiracies — the president has also taken to claiming that the Hurricane Maria death toll in Puerto Rico from 2017 is fake too.