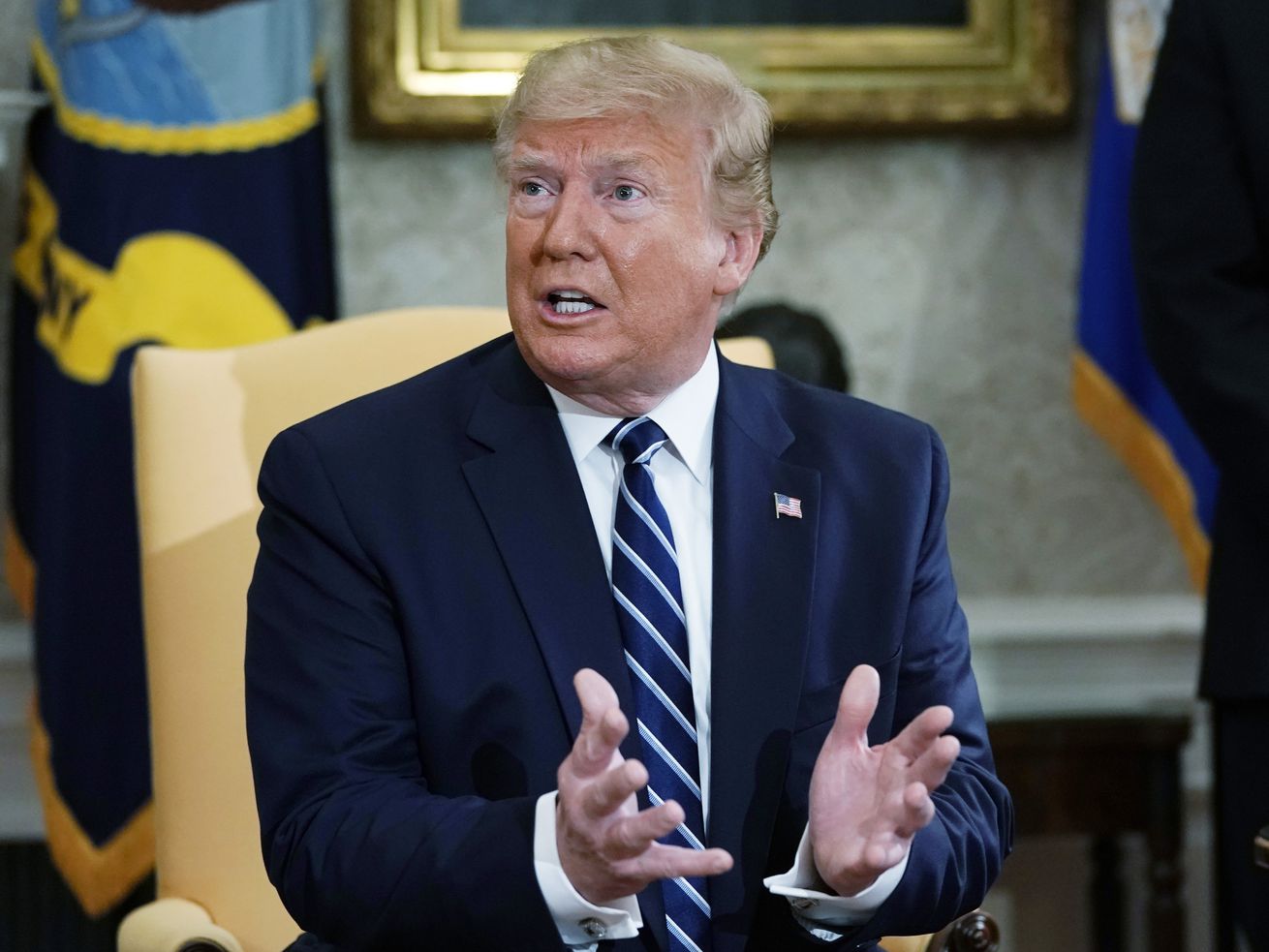 Senate Republicans are split on the issue.

If President Donald Trump wants to take military action against Iran, Republicans in Congress seem ready to let him — whether he asks for their permission or not.

Early Thursday, Iran struck down a United States military drone, claiming it was in Iranian airspace, while American officials said it was in international airspace. The incident, a move the president has described as potentially unintentional, is the latest in what has been a growing tit-for-tat escalation between the two countries, and Democrats are worried it’s among the developments that could be used to make the case for additional military action. Because of this concern, they’ve increasingly pushed for Congress to reclaim the war powers it’s long been granted by the Constitution.

Many Republicans, however, are reluctant to exercise the legislative branch’s constitutional role in deciding whether to declare war.

“I think flexibility is important here but I think the White House needs to be able to make their case,” Sen. Roy Blunt (R-MO) said, adding that he would not support a measure requiring congressional approval for military action.

The power to authorize war is constitutionally in the hands of Congress. But for decades Congress has ceded war-making powers to the president. For 18 years, Democratic and Republican presidents have used the same law that was passed in 2001 after 9/11 to allow George W. Bush to take action against Al Qaeda and adjacent groups, to wage military action across the Middle East. The Trump administration could potentially use that same Authorization for Use of Military Force (AUMF) against Iran, after briefing Congress this week on what they said were ties between Iran and Al Qaeda.

Democrats aren’t buying it. House Democrats voted to repeal the 2001 war authorization Wednesday, the first time the House has successfully passed a repeal of the AUMF since it was enacted. A measure that would force Trump to seek congressional approval for using military force against Iran is also being pushed in the Senate.

“I can’t imagine that what we voted on 18 years ago still works today,” Sen. Dick Durbin (D-IL) told reporters. “It’s quite a stretch … you can’t keep leaning on something that’s that old.”

Republicans haven’t expressed a clear willingness to check the president on war powers.

In interviews with Vox, several Republican senators offered ambivalent responses when asked if they’d back an amendment to the defense budget, currently being debated in the Senate, that would “prohibit funds from being used for military action against Iran without explicit authorization from Congress.”

“It’s such a speculative question,” Sen. Mitt Romney (R-UT) said, adding it would have to depend on what Iran does.

Lawmakers in favor of the amendment, however, argue that action is needed now in the wake of recent events. A suspected Iranian attack on two commercial tankers, Iran’s announcement of plans to enrich uranium beyond the limits set by the 2015 nuclear deal, and the Trump administration’s decision to send 1,000 troops to the Middle East this week have made at least one US defense official worry that “all variables point to war.”

Kennedy said he wasn’t sure the White House would have the time to secure congressional approval if it wanted to use military force, but said he hadn’t had an opportunity to weigh the amendment. “I think we need to demonstrate military restraint but maintain maximum pressure,” he said. “If the ayatollah decides to spill American blood, that’s a different story. I don’t know if that happens if the president would have time to consult us.”

Sens. Lamar Alexander (R-TN) and Tim Scott (R-SC) also said they hadn’t had the opportunity to consider the amendment just yet.

The amendment — if it passed — would significantly constrain the administration’s ability to launch a war with the Middle Eastern nation on its own. With Democrats in control of the House, Republicans and the White House know that getting congressional authorization for war, without a clear and immediate threat, will be an uphill battle in the House. House Democrats made it plain where they stand on this issue Wednesday when they passed the first repeal of the 2001 AUMF since it was enacted.

There’s a small contingent of Republicans worried about war powers

Congressional lawmakers in both parties are well aware that Trump’s administration has been acting unilaterally — and potentially unconstitutionally — in the Middle East.

In April, seven Republican senators broke with the president and voted in favor of a War Powers Resolution directing Trump to end US involvement in the Saudi Arabia-led war in Yemen. Sens. Rand Paul, Susan Collins, Lisa Murkowski, Todd Young, Mike Lee, Jerry Moran, and Steve Daines bucked the White House and the rest of their party in order to approve the resolution, which Trump ultimately vetoed.

They make up a small contingent of Republican senators that have shown some willingness to go up against the president when it came to reining in executive power.

Paul, Lee, and Young have backed measures that would limit the White House’s ability to pursue military action against Iran without congressional approval.

Paul has cosponsored the amendment to the National Defense Authorization Act, alongside Democratic senators including Tom Udall (D-NM), Jeff Merkley (D-OR), and Tim Kaine (D-VA), which would require the White House to obtain congressional approval if it wants federal funding to move forward with military action. And Sen. Mike Lee (R-UT) was among the signatories of a letter several lawmakers recently sent to the White House questioning Trump’s decision to send additional troops to the Middle East.

Collins, one of the lawmakers who opposed the White House on the Yemen resolution, said that Congress needs to claw back its authority on war power generally.

“I don’t think that’s healthy for the executive to act unilaterally,” Collins said.