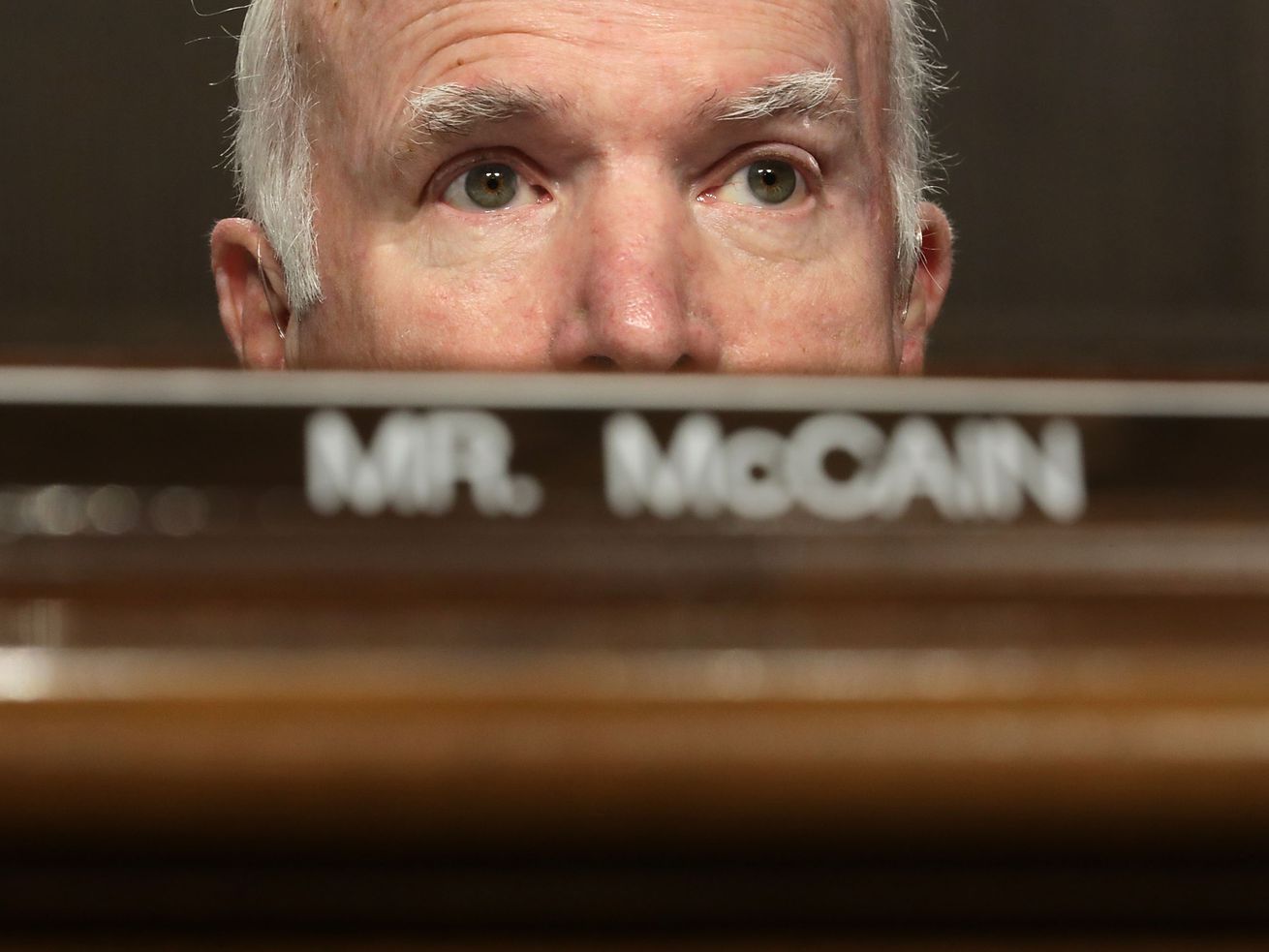 The Senate is mourning John McCain after his death.

John McCain, one of the titans of the United States Senate and a man who truly earned the moniker, died at age 81 on Saturday from brain cancer.

His colleagues’ grief was evident in their statement. Senate Democratic leader Chuck Schumer said he would move to rename one of the Senate’s three office buildings after the Arizona senator:

“As you go through life, you meet few truly great people. John McCain was one of them. His dedication to his country and the military were unsurpassed, and maybe most of all, he was a truth teller – never afraid to speak truth to power in an era where that has become all too rare. The Senate, the United States, and the world are lesser places without John McCain.

“Nothing will overcome the loss of Senator McCain, but so that generations remember him I will be introducing a resolution to rename the Russell building after him.”

America and Freedom have lost one of her greatest champions.

….And I’ve lost one of my dearest friends and mentor.

From Sen. John Cornyn, the No. 2 Republican in the Senate:

Today the nation lost a proud veteran, seasoned lawmaker, and beloved father. A true maverick and highly-effective statesman, John McCain’s career spanned the globe and was the envy of many. The firmness of his character, and unyielding love for this country, were unmatched.

“As we mourn the loss of John McCain, we’re called to be stronger patriots and better citizens. We send our condolences to his four children, his wife Cindy, and the entire McCain family. It’s hard to lose him, but I know the legacy he leaves will long remain.”

From Sen. Tammy Duckworth (D-IL), another veteran permanently injured in service of the nation:

“My heart is heavy today as I join countless Americans across our country in mourning the loss of one of our nation’s greatest leaders and statesmen, one of my personal heroes, Senator John McCain. Throughout his life – as a Naval Aviator, a Prisoner of War who endured years of torture, a Congressman, and a six-term Senator – John repeatedly showed how anything is possible when armed with determination, a deep sense of patriotism and an unbreakable will.

“His refusal to give up in the face of adversity inspired me when I was a mission-less helicopter pilot with no legs recovering at Walter Reed. In fact, I met him there for the first time when he visited us Wounded Warriors. He joked that he and I both flew into a missile and that didn’t take much skill. It’s what you do afterwards that matters. His unyielding optimism showed me there was a way to continue serving my country and to advance the core values of the nation that we both fought to protect. His integrity and commitment to putting country above all else as an elected official is an example I have tried to embrace during the comparatively short time I have had the honor of holding political office.

“I will forever treasure the privilege of working with John McCain in the Senate—even if it was only for a short time—and I will be forever grateful for the sacrifices he made in service to the greatest country the world has ever known. I hope the heights he reached and the life he led can be a lesson to us all about the power of perseverance and the ability of every American to overcome any challenge and make our country a better place.”