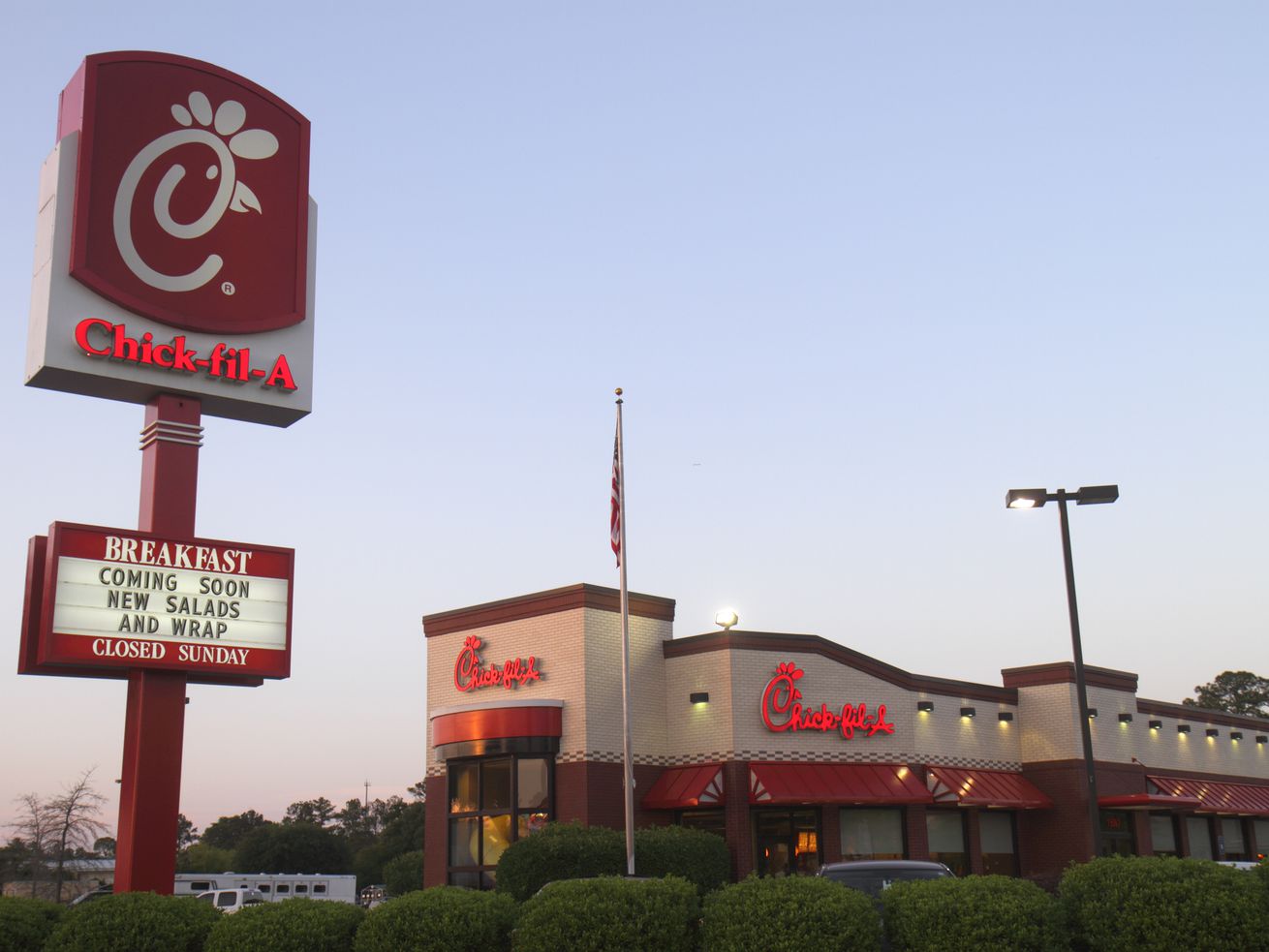 For Chick-fil-A, boycotts and negative press haven’t been bad for business.

The Texas state legislature recently passed what’s been dubbed the “Save Chick-fil-A” bill. The bill, introduced in response to the San Antonio City Council’s decision to remove a proposed Chick-fil-A location from its airport concession agreement, forbids government entities from taking “adverse actions” against businesses because of those businesses’ “religious beliefs and moral convictions, including beliefs and convictions regarding marriage.”

The bill’s supporters say it’s a way of protecting businesses’ First Amendment rights — but opponents say it could give private businesses legal sanction for discriminating against LGBTQ customers or staff under the guise of free speech.

“While I’m sure the intent of this individual bill is to protect individual freedoms, in reality it would provide a segue for individuals looking to circumvent the rule of law in the name of religion,” state Rep. Julie Johnson reportedly said during the House’s debate on the bill. “Private businesses could legally refuse to serve families like mine based on the owner’s religious belief.”

The Texas bill is about far more than Chick-fil-A — it’s about whether discrimination against LGBTQ people will be considered a protected religious act. But the fact that the bill’s supporters have chosen to christen it the Save Chick-fil-A bill shows how the fast-food chain has yet again become synonymous with anti-gay sentiment, largely due to its owners’ political beliefs and history of charitable giving. For the better part of the past decade, Chick-fil-A has been embroiled in controversy after controversy — yet business seems to be better than ever, even as its founders’ ideals fall out of favor.

S. Truett Cathy, a devout Baptist, opened the first Chick-fil-A in Atlanta in 1967, and the chain has remained in his family’s hands ever since. Today there are more than 2,300 locations across the country — all of which are closed on Sundays. (“Having worked seven days a week in restaurants open 24 hours,” Chick-fil-A’s website reads, “Truett saw the importance of closing on Sundays so that he and his employees could set aside one day to rest and worship if they choose — a practice we uphold today.” A previous iteration of the website reportedly claimed the restaurant was closed on Sundays as a “testament to [Cathy’s] faith in God.”)

“It was not an issue in 1946 when we opened up our first restaurant,” Dan Cathy, Truett’s son and the chain’s current CEO, said in a 2012 interview with the Baptist Press. “While developers had no identity whatsoever with our corporate purpose to ‘glorify God and be a faithful steward of all that is entrusted to us and have a positive influence on all that come in contact with Chick-fil-A,’ they did identify with the rent checks that we wrote to the mall, based on our sales.”

That 2012 interview, in which Cathy was quoted as saying that he believes in the “biblical definition of the family unit” — i.e., that marriage should only be between a man and a woman — was the catalyst for a major national controversy. Cathy later tried to clarify his point in a radio interview: “As it relates to society in general,” he said, “I think we are inviting God’s judgement on our nation when we shake our fist at him and say, ‘We know better than you do as to what constitutes marriage.’”

The backlash to Cathy’s comments was swift. First a New York woman named Carly McGehee planned an LGBTQ kiss-in at Chick-fil-A restaurants across the country. It was scheduled for August 3, 2012. Then came the backlash to the backlash: Former Arkansas Governor Mike Huckabee responded to McGehee’s plan with a “Chick-fil-A Appreciation Day” scheduled for August 1. Thousands of people across the country bought chicken sandwiches in support of the Cathys and their mission, and Dan Cathy himself made an appearance at a Chick-fil-A location in Fayetteville, North Carolina, to thank customers for showing up.

But the 2012 incident wasn’t the first time the Cathys were accused of homophobia. A year earlier, a Pennsylvania Chick-fil-A’s decision to donate food to a marriage seminar conducted by the Pennsylvania Family Institute, a group known for its anti-gay advocacy, prompted a nationwide boycott of the chain. Cathy issued a video statement in response to the boycott, in which he claimed the company “serves all people” and that, while he personally believes in the “biblical definition of marriage,” his company doesn’t have an “anti-gay agenda.” And back in 2002, a former employee of a Houston Chick-fil-A sued the chain for discrimination. The employee, who was Muslim, alleged he had been fired because he refused to pray to Jesus with other employees. The suit was settled out of court.

These controversies also shined a light on the fact that the Cathys regularly made donations to charities known for discriminating against LGBTQ people.

In 2011, the same year a Pennsylvania Chick-fil-A franchise donated food to a local anti-gay organization, the LGBTQ advocacy group Equality Matters obtained tax records which revealed that the Cathy family had donated more than $1.9 million to anti-gay groups in 2010 through the WinShape Foundation, the Cathy family’s charitable giving organization founded by Truett Cathy in 1984. Those donations included a $1.1 million gift to the Marriage & Family Foundation, a group that promoted so-called traditional marriage and opposed both gay marriage and divorce; $480,000 to the Fellowship of Christian Athletes, an athletic organization that requires applicants to agree to a “sexual purity statement” that condemns LGBTQ people for living “impure lifestyle[s]”; and $1,000 to Exodus International, a group that promotes anti-gay conversion therapy.

For Chick-fil-A’s opponents, the problem was bigger than Cathy’s anti-gay comments, it was that he was apparently putting his money where his mouth was, and he had a lot of money to go around.

Petitions and boycotts didn’t hurt Chick-fil-A — the chain continued expanding across the country despite people’s opposition to the Cathys’ views on marriage — but they did potentially contribute to making the Cathys somewhat less vocal about their political beliefs. In 2012, the Chicago-based Civil Rights Agenda issued a statement claiming that Chick-fil-A had promised to “no longer give to anti-gay organizations, such as Focus on the Family and the National Organization for marriage.”

Chick-fil-A declined to comment on the matter at the time, instead issuing a boilerplate statement to BuzzFeed News:

“We have no agenda, policy or position against anyone. We have a 65-year history of providing hospitality for all people and, as a dedicated family business, serving and valuing everyone regardless of their beliefs or opinions. The genuine, historical intent of our WinShape Foundation and corporate giving has been to support youth, family and educational programs.”

In a 2014 interview with the Atlanta Journal-Constitution, Cathy admitted he regretted getting involved in the gay marriage debate — though he didn’t say he regretted what he said, just that he said it. “I think the time of truths and principles are captured and codified in God’s word and I’m just personally committed to that,” he said at the time. “I know others feel very different from that and I respect their opinion and I hope that they would be respectful of mine. … I think that’s a political debate that’s going to rage on. And the wiser thing for us to do is to stay focused on customer service.”

Though Chick-fil-A never managed to fully shed its reputation as a homophobic purveyor of delicious chicken sandwiches, it continued to expand its national presence, especially above the Mason-Dixon line. New York City’s first Chick-fil-A, a 5,000-square-foot behemoth in Midtown, opened in 2015. (It was met with resistance by locals but opened anyway.) Three years later, Chick-fil-A added another New York City location, a five-story, 12,000-square-foot restaurant that, according to ABC News, is “nearly twice the size of any existing Chick-fil-A.” (This location, like many other Chick-fil-As across the country, is an independently owned franchise. It is not open on Sundays.)

By the end of 2018, Chick-fil-A was slated to overtake Subway and become the third-largest fast-food restaurant in the country after McDonald’s and Starbucks, according to a report by Kalinowski Equity Research. It’s reportedly the most profitable fast-food chain in the country on a per-location basis, and has been the number one fast-food restaurant on the American Customer Satisfaction Index for three years in a row.

But neither Chick-fil-A’s success nor its expansion to big, liberal cities like New York seemed to prevent the Cathys from quietly donating to anti-gay groups, even after they allegedly claimed they wouldn’t. As ThinkProgress reported in 2017, Chick-fil-A continued to bankroll anti-gay groups like the Fellowship of Christian Athletes, the Salvation Army, and the Paul Anderson Youth Home through the Chick-fil-A foundation. In 2019, ThinkProgress once again reported that Chick-fil-A had donated more than $1.8 million to the three groups.

The latest ThinkProgress report, which shows that Chick-fil-A donated to these groups as recently as 2017, is what encouraged the San Antonio city council to remove Chick-fil-A from its planned airport concession agreement. But despite that setback, Chick-fil-A remains stronger than ever, even as support for gay marriage is at an all-time high.

In a 2017 interview with Morning Consult, Thomas Ordahl, chief strategy officer of the brand consulting firm Landor, succinctly explained how Chick-fil-A has been able to weather these constant controversies. “What’s interesting about the paradox of Chick-fil-A is that, in many ways, it’s probably one of the most socially advanced companies in terms of treatment of employees and its role in the community,” Ordahl said, “and yet its founder has a position that is quite dissonant with most people in the U.S.”

As Rachel Sugar previously wrote for The Goods, the simple fact is that some people, even those who support LGBTQ rights, eat at Chick-fil-A because they like the food — even if they dislike what the Cathys stand for. Others, like the hundreds of people who waited in line for chicken sandwiches at the Mike Huckabee-sanctioned Chick-fil-A Appreciation Day in 2012, not only like the food but will also go out of their way to eat it precisely because they agree with the Cathys.

There’s also the fact that eating at Chick-fil-A is perceived as being an overall more pleasant experience than going to, say, McDonald’s. The over-the-top politeness exhibited by Chick-fil-A employees, who are required to say “my pleasure” instead of “you’re welcome,” has become a meme. And the employees’ politeness is often thought of as proof that Chick-fil-A treats its workers well.

All of this has allowed Chick-fil-A to maintain its friendly, wholesome image, even as the Cathys continue to be accused of funding homophobic groups and causes. At the same time, Chick-fil-A and its many supporters have successfully spun opposition as an attack on religious freedom. Chick-fil-A’s controversies aren’t just something to overcome — they’re also the source of much of the restaurant’s support.

And then there are people who have suggested they’re willing to look past the Cathys’ beliefs altogether. In March, presidential candidate Pete Buttigieg — who, if elected, would be the US’s first openly gay president — said he thought Chick-fil-A boycotts were a form of “virtue signaling.”

Sign up for The Goods’ newsletter. Twice a week, we’ll send you the best Goods stories exploring what we buy, why we buy it, and why it matters.