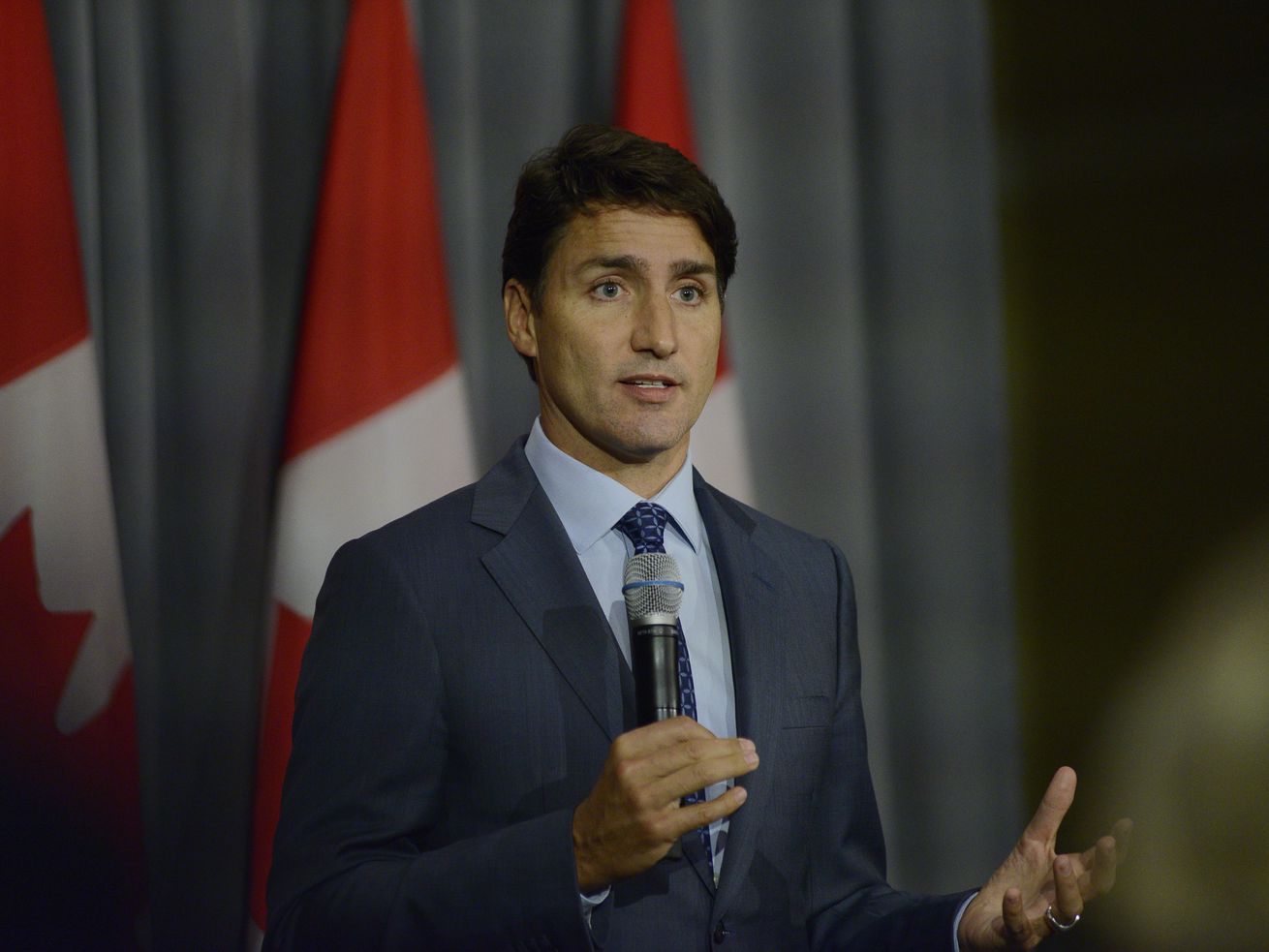 Prime Minister Justin Trudeau, leader of the Liberal Party of Canada, delivers remarks to supporters at a fundraising event on September 5, 2019, in Brampton, Canada. | Arindam Shivaani/NurPhoto via Getty Images

A yearbook photo shows Trudeau at an “Arabian Nights”-themed party at a private day school he taught at in 2001.

Canadian Prime Minister Justin Trudeau, the handsome, charming champion of Western liberal ideals of diversity and inclusion, wore brownface makeup to an “Arabian Nights”-themed party at the private school where he was teaching in 2001.

Time magazine, which first reported the story Wednesday evening and obtained a photograph of the incident, reports that the photograph appeared in the 2000-2001 yearbook of West Point Grey Academy, a private day school where Trudeau was a teacher. He was 29 years old at the time.

In the photo, Trudeau is dressed in a white turban decorated with a large feather in the front and what looks to be a flowing white robe. His face, neck, and hands are all covered in dark brown makeup or paint of some kind. He stands with a group of four women, his arm around one — none of whom are wearing brownface.

Time magazine has just dropped a bombshell report on ⁦@JustinTrudeau⁩

We are with the campaign now. We are told Trudeau will address this before his plane takes off.

The Liberal Party of Canada, which Trudeau leads, confirmed to Time that it was in fact Trudeau in the picture. “It was a photo taken while he was teaching in Vancouver, at the school’s annual dinner which had a costume theme of ‘Arabian Nights.’ He attended with friends and colleagues dressed as a character from Aladdin,” Astravas told Time.

Speaking to reporters shortly after the story broke, Trudeau said, “I deeply regret that I did that. I should have known better, but I didn’t…I’m deeply sorry that I did that.”

“I take responsibility for my decision to do that. It was something that I didn’t think was racist at the time,” Trudeau said, adding that he knows now that it was racist. “I’m pissed off with myself for having done it.”

When asked if he’d ever done something like this at any other time in his life, he revealed that in high school he’d participated in a talent show in which he “wore makeup and sang ‘Day-O,’” referring to a traditional Jamaican folk song.

The prime minister is currently on the campaign trail in advance of the country’s federal elections on October 21. He indicated to reporters that he planned to continue campaigning, saying he’ll have to work harder now to convince voters of his values.

He’s already facing the fallout from an unrelated political corruption scandal in which he and his political allies were accused of improperly pressuring Canada’s now-former minister of justice and attorney general, Jody Wilson-Raybould, to drop criminal corruption charges against the Quebec-based engineering company SNC-Lavalin.

That scandal has somewhat tarnished his shiny image as a proponent of progressive values. As Vox’s Jen Kirby explained:

Trudeau, who became prime minister in 2015, made transparency, inclusion, and openness a centerpiece of his leadership philosophy, and he became democracy’s biggest cheerleader. He modeled his governing platform on promoting gender equality and indigenous rights.

His alleged pressure campaign and the eventual sidelining of Wilson-Raybould — a former prosecutor and indigenous woman who was once a symbol of Trudeau’s diverse and gender-balanced cabinet — very much looks like a betrayal of those values.

The big question in the upcoming election was whether Trudeau’s record on other issues and his personal boyish charm would be enough to convince voters to re-elect him. The revelation that he once chose to wear brownface — and as a teacher at a school function, no less — will certainly cause some voters to rethink whether Trudeau is the man they thought he was.