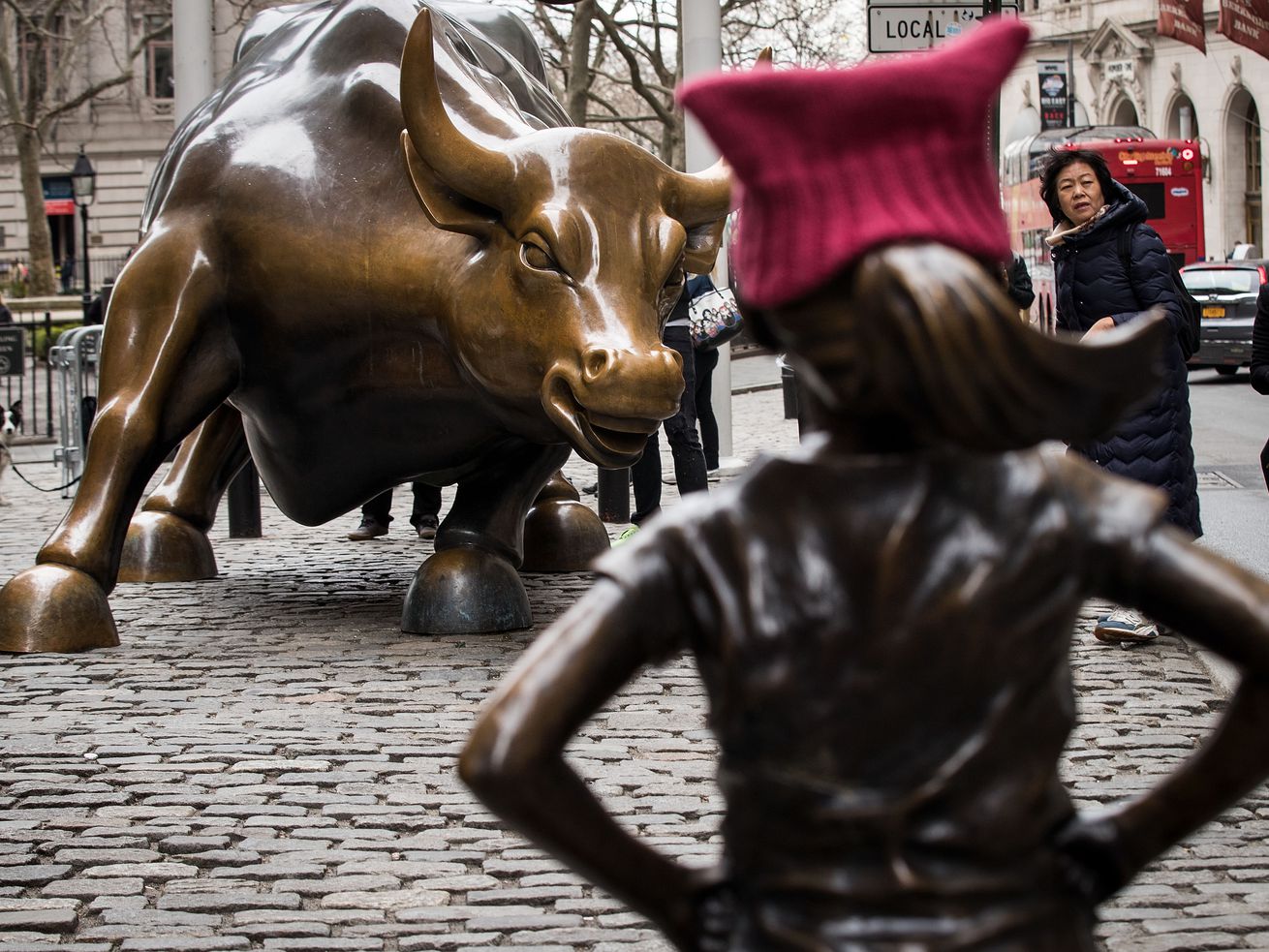 Apple, which currently has two women on its eight-member board, would have to add a third.

Women are dramatically outnumbered on the boards of directors for the nation’s biggest companies. California just passed a law trying to change that.

On Sunday, Democratic Gov. Jerry Brown signed California Senate Bill 826, which requires publicly held companies based in California to have a minimum of one woman on their boards of directors by the end of 2019. From there, women’s representation will have to increase: By the end of July 2021, companies have to have at least two women on boards of five members and at least three women on boards with six or more.

The law would mean 684 women would be needed for just the boards of the publicly traded companies that rank among the nation’s 3,000 largest — plus many more for smaller companies, Annalisa Barrett, a clinical professor of finance at the University of San Diego’s School of Business, told the Los Angeles Times.

But it’s not clear that hundreds of women will actually join boards in the state. More than 30 business groups, including the California Chamber of Commerce, oppose the law. Critics point out it might not pass legal muster if challenged in the courts. There are questions about how many companies in California it would apply to at all.

Even Brown seemed skeptical about the law’s long-term prospects, acknowledging “serious legal concerns”: “I don’t minimize the potential flaws that indeed may prove fatal to its ultimate implementation,” he wrote in an accompanying message upon signing the bill. “Nevertheless, recent events in Washington, DC — and beyond — make it crystal clear that many are not getting the message.”

As if to eliminate any doubt about the message he meant to send by signing the law, Brown referenced the US Senate Judiciary Committee on his statement.

Brown is likely sincere in his desire for more gender diversity, Loyola University law professor Jessica Levinson said. “If this were a month ago, I don’t think he would have been as eager to sign the bill,” she added. “But he has to continue to show California is the capitol of ‘the resistance.’”

Still, the bill — which mimics requirements that European countries have passed to increase women’s representation in business governance — has already drawn attention to women’s underrepresentation on corporate boards.

“If nothing else, what this law is doing is increasing the visibility and awareness on the issue itself and the importance, and that is a win in and of itself,” said Serena Fong, the vice president of strategic engagement at Catalyst, a nonprofit focused on promoting women in business.

One-quarter of the publicly traded companies headquartered in California don’t have any women on their boards, according to the bill’s authors, California state Sen. Hannah Beth Jackson and Senate President Toni Atkins, who are both Democrats.

Nationally, women on boards are dramatically underrepresented: According to Catalyst, women make up about 20 percent of S&P 500 board seats. There are 12 Fortune 500 companies with no women on their boards whatsoever, and the number of Fortune 500 CEOs dropped by 25 percent this year, from 32 to 24.

Evidence suggests that having more gender and racial diversity in the boardroom is good for business. A Peterson Institute study found that the presence of women on corporate boards and in the C-suite may contribute to firm performance, and that among profitable companies, a move from no women leaders to 30 percent representation was associated with a 15 percent jump in profit.

Credit Suisse estimates that companies with more gender diversity in the boardroom see better stock market returns and valuations, and McKinsey found that the most gender-diverse companies are 15 percent more likely to outperform their peers.

Amanda Packel, co-director of the Rock Center for Corporate Governance at Stanford, cautioned that these findings can be overstated — a correlation between diversity and business performance, but that doesn’t necessarily mean causation.

“Companies that are more prominent and have better performance might be under more scrutiny, or are more focused on the issue, or are able to attract more women or diverse directors,” she said. “That being said, there is certainly a business case in terms of the need for diversity on the board, whether you can prove it in a regression analysis or not.”

But evidence alone hasn’t been enough to get companies in California to act. In 2013, Jackson sponsored a nonbinding resolution urging each public company to increase the number of women on its boards by 2017. But by December 31, 2016, less than 20 percent of them had followed the recommendation.

Some European countries, including Germany, Sweden, Iceland, Finland, and France, have quotas and fines requiring to add women to their boards. Norway in 2008 required companies listed there to give at least 40 percent of their director seats to women.

Aaron Dhir, an associate professor at York University’s Osgoode Hall Law School and the author of a book about boardroom diversity, has studied the issue extensively.

“Like the California quota, the Norwegian quota was hugely controversial, but the directors who I interviewed, most of whom were initially against it, it was only after they saw the law in action and actually experienced it that they actually changed their minds and warmed to the quota,” he said.

Norwegian companies came to understand that sometimes such a blunt instrument is necessary, given implicit biases, and diversity improved the overall quality of governance and decision-making.

Women and people of color have different life experiences and perspectives than white men who typically comprise boards, and that makes a difference. Quotas force companies to look outside of the normal places for diverse candidates who might not have the typical background for such a position.

“Companies expanded their one-dimensional picture of what a qualified board member should be,” Dhir said.

Because so many companies are headquartered in California — 377 of the largest 3,000 publicly held companies in the US are located there — the bill could make a difference if companies comply. But it could also face legal challenges.

More than 30 business groups, including the California Chamber of Commerce, oppose the law, according to the LA Times. The businesses argue that the law will “displace an existing member of the board of directors solely on the basis of gender” and that it focuses too narrowly only on gender instead of other aspects of diversity, including race and sexual orientation.

Successful equal protection challenges under the US and California constitutions could nullify the law: The government would have to prove not only that there is disparity in board representation among men and women but also that such a divide is a sufficient reason to create a special law for women.

“It makes a categorization based on gender, which is subject to increased scrutiny if the law is challenged, and it’s not 100 percent clear how that would play out,” Packel, from Stanford, said. “The state would have to meet a burden in terms of showing the reason that legislation is needed and why this methodology is necessary.”

There are also questions about whether it will apply to companies that are headquartered in California but incorporated elsewhere. (Most US companies are incorporated in Delaware for tax reasons.)

The “internal affairs doctrine” ensures the state in which a company is incorporated governs issues such as voting rights, dividends, and investor relations, Joseph Grundfest, a Stanford University law professor and former commissioner for the Securities and Exchange Commission, argued a recent paper outlining the legal case against the bill. That would limit the law’s application to just 72 corporations headquartered and chartered in California.

Most of those companies already comply with the bill’s mandates. But one doesn’t: Apple, which has two women on its eight-member board. Apple is one of the most recognized brands in the world and became the first $1 trillion publicly traded company in the US. Adding more diversity to its board would not be insignificant.

Still, if the law does stand, there is also a chance that companies will just pay the fine and move on — a few hundred thousand dollars is a drop in the bucket for a lot of companies, particularly Apple.

“I do think for big companies, it could be like any other fine, where it’s just the cost of doing business,” Levinson said. “But for smaller companies, this is a big hit.”

If we wait for the market to just figure this out, we’ll be waiting a while

Waiting for boardrooms to eventually become diverse will take a long time: the Government Accountability Office in 2016 estimated that women in S&P 1500 companies will reach parity with men in 40 years.

Grundfest argues that shareholder activism, not a state requirement, is the way to get more women on boards. Essentially, that means big funds insisting the companies they invest in having diverse boards, engaging with companies to increase diversity, and potentially withholding votes.

Levinson, from Loyola, said the California law is “government overreach” and what matters more is corporate culture. “It feels like kind of a sledge hammer when you actually need a thousand tiny little stitches,” she said.

There are some institutions that have taken more of an interest in diversity as of late, including pension funds CalPERS and CalSTRS and investment giants State Street and BlackRock. And the #MeToo movement has also brought attention to the issue of women in corporate America.

“The bottom line is, we need to make [board diversity] a reality, and the only way you make it a reality is if the marketplace demands it,” David Katz, a partner at Wachtell, Lipton, Rosen & Katz in New York City, said.

Still, waiting for the markets to come around and corporate culture to change isn’t exactly a satisfying answer for women who want more equal representation now, not when they’re old or dead. The fact that women need to make an evidence-based case for their inclusion on boards, in some ways, proves the point.

Nobody asks the opposite question, said Fong, the Catalyst vice president: “Where is the business case for keeping a board all white and all male?”