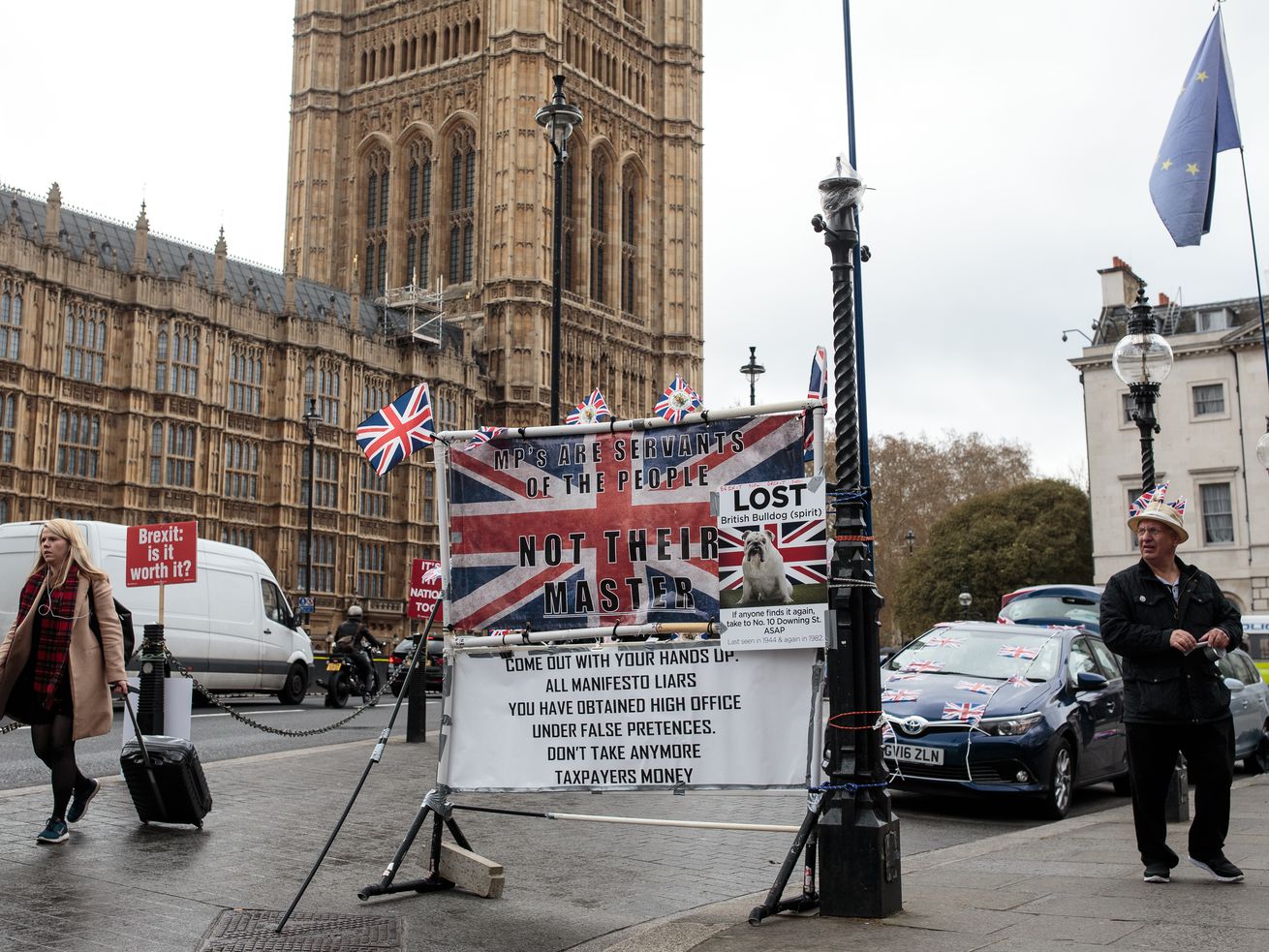 The terms you need to know to understand the EU-UK divorce.

Brexit — a portmanteau for “British exit” — has generated a lot of very specific lingo.

And those terms we use to describe and define the United Kingdom’s breakup with the European Union can sometimes make this already complicated process even harder to follow.

Here’s a handy glossary of Brexit terms, with some links to more in-depth coverage, to help you better understand this slow-moving political divorce ahead of the new October 31 deadline.

This is a section in the European Union’s Treaty of Lisbon, the international agreement that lays out how the EU functions. Article 50 gives member states the power to leave the bloc.

The United Kingdom triggered Article 50 on March 29, 2017, when British Prime Minister Theresa May gave notice to European Council President Donald Tusk that the UK planned to leave the bloc. That kicked off the formal start of EU-UK negotiations and the two-year countdown until the UK’s official exit.

The Article 50 period for the UK was set to expire on March 29, 2019, but the rest of the EU member states agreed to extend it until at least April 12.

May asked for another extension last week, and EU leaders agreed to delay Brexit again, this time until October 31, 2019, though the UK can get out earlier if it manages to pass a Brexit deal. Any postponement requires the unanimous agreement of all EU member states.

But the UK does have the unilateral authority to revoke Article 50 and essentially cancel Brexit, at least according to a December ruling from the European Court of Justice. A petition on the UK Parliament’s website calling on May to revoke Article 50 reached nearly 6 million signatures last month.

A term that refers to hardliners, who tend to come from the right-wing of May’s Conservative Party, who ardently support the UK’s exit from the EU. Brexiteers want the UK to extricate itself from EU institutions and regulations as much as possible.

This refers to the divorce plan that May and the EU negotiated last year. There are two components: the 585-page withdrawal agreement, which is the legal text that lays out the terms of the breakup, and a shorter political declaration that establishes that the UK and EU will seek to negotiate a yet-to-be-determined future relationship.

The deal provides for a 21-month transition period after Brexit, which the UK and the EU will use to negotiate a future partnership. The has said that future talks are contingent on the UK passing the Brexit deal, which so far has proven impossible: Parliament has rejected the full Brexit deal twice, including once in January by a historic 230-vote margin. It also voted down just the withdrawal agreement in March 2019.

(You can read more about the Brexit deal here.)

This is a very soft Brexit plan favored by some UK members of Parliament (MPs). This plan, which would keep the UK in very close alignment with the EU.

It would likely involve the UK joining the European Free Trade Association (EFTA), which is made up of Norway, Lichtenstein, Iceland, and Switzerland. EFTA countries have access to the EU single market through the European Economic Area, which means even though these countries aren’t formally part of the EU they all allow for the free movement of goods, services, capital, and labor (people) between borders.

EFTA countries have to contribute to the EU budget and follow a lot of EU rules, though they’re exempt from some regulations. At the same time, these EFTA countries have less leverage when it comes to shaping the EU rules than EU members.

The Common Market 2.0 plan also calls on the UK to remain part of the customs union, or reach some sort of customs union arrangement to avoid a hard border between Northern Ireland (part of the UK) and the Republic of Ireland (another EU member state.)

Norway and all the other EFTA countries aren’t part of the EU customs union, however, so that’s a potential complication with this plan.

The European Union customs union promotes frictionless trade between all the 28 current EU member states by removing tariffs and duties and other barriers to trade (like quotas).

Thanks to the customs union, the EU operates as one unit when it comes to trading with the outside world, so all member states impose the same external tariffs when trading with other countries — whether it’s the US or China. This prevents individual member states from striking out on their own, and forming independent trade deals — something Brexiteers really want to do.

Some countries, such as Turkey, have customs union agreements with the EU that cover certain goods.

This term, which refers to a group of hardline Conservatives in the UK is something of a misnomer. They’re actually deeply skeptical of the EU, and want to leave it. Conservative MP Jacob Rees-Mogg leads this group of pro-Brexit advocates.

This is the Brexiteers’ favored trade approach to any future EU-UK future relationship.

UK would plan on striking a trade agreement or a series of agreements to reduce trade barriers, which would ideally replace the customs union or single market membership and remove the UK from most of the EU institutions. This is sometimes referred to as a Canada-style Brexit, as the model would be the trade deal the EU has with Canada.

This is the scenario favored by hardline Brexiteers.

The UK and the EU would make a clean break of things, and would then try to negotiate some sort of free trade deal. The UK would gain control over things like immigration and borders, but it would also lose the perks of being part of the European Union single market and customs union.

These are nonbinding votes in the UK Parliament on a series of resolutions that, in the Brexit case, are supposed to show which kinds of Brexit plans can win a majority in the House of Commons.

MPs can vote on as many options as they want, or none at all.

Parliament voted on eight different Brexit options on March 27, but none received the majority of votes. Parliament narrowed those options down and voted on four options on April 1, but all failed again — though the permanent customs union option only lost by three votes.

(You can read more about indicative votes here and here.)

This is a so-called insurance policy in the Brexit deal that prevents the establishment of a hard border — meaning physical customs checks — between Northern Ireland (part of the UK) and the Republic of Ireland (an EU member state) once the UK leaves the EU.

The backstop plan is included in the withdrawal agreement between the UK and EU. It stipulates that if the two sides can’t figure out a viable way to avoid checks on the Northern Ireland-Ireland border at the end of a transition period after Brexit, the UK will remain within the customs union, with Northern Ireland following additional EU rules.

The UK can’t pull out of the agreement unilaterally, although the EU offered additional legal assurances that gives the UK the ability to challenge the terms of the backstop if it feels the EU isn’t negotiating in good faith.

Brexiteers and May’s conservative allies in Northern Ireland oppose the backstop, as they feel it potentially traps the UK within the EU after Brexit.

(You can read more about the Irish backstop here.)

The phrase “meaningful vote” refers to a requirement that the UK Parliament must approve any Brexit deal that May negotiates with the EU.

Pro-European MPs successfully won this with the EU Withdrawal Bill, the legislation passed by Parliament in 2018 which is also known as the “Great Repeal Bill,” which ends the authority of EU law over the UK, but also puts some EU law into domestic law to reduce some of the chaos after Brexit.

Parliament has held two so-called “meaningful votes” on the Brexit deal — and each time, MPs have voted down the agreement. (The third defeat of May’s withdrawal agreement wasn’t a full meaningful vote because it did not include the political declaration.)

This is a chaotic scenario in which the UK leaves the EU without any deal or transition period in place. The UK’s current agreements with the EU on trade, security, travel, and more are set to expire on October 31, 2019.

This refers to the second part of the Brexit deal, which says that after the UK-EU divorce, the two parties will establish a future relationship on trade, security, and other issues.

The political declaration is extremely nonspecific by design, to allow for both hard and soft Brexit options. But this is also why many MPs, including many supporters of a soft Brexit, oppose it.

They want the UK and the EU to tweak the language to offer more clarity on that future relationship by saying the UK will join a customs union or single market. This is intended to bind May — or, more likely, a future prime minister — to use this as a negotiating framework.

This is also known as a “people’s vote” or confirmatory public vote. Advocates of a second referendum want the public to vote on the final Brexit deal approved by Parliament. They would basically get to say whether they want this version of Brexit, or would prefer to stick with the current deal, which is the UK’s current EU membership.

So far, a second referendum has failed to gain traction in Parliament, and May has opposed it.

(You can read more about a second referendum here.)

The single market ensures the free movement of goods, services, capital, and people within and between all European Union member states. The EU has defended these “four freedoms” as inviolable, meaning it’s all four or nothing at all, and the EU has rejected any attempts to cherrypick.

A “soft” Brexit means a much less severe break with the EU than some of the other scenarios that have been proposed.

This is the 585-page divorce settlement negotiated by the UK and the EU that resolves some of the legal and technical issues of the breakup. The plan calls for a 21-month transition period where the UK will formally leave the EU and have no decision-making power, but will remain within its trade and security arrangements until December 2020. (The transition period can be renewed once, until 2022.)