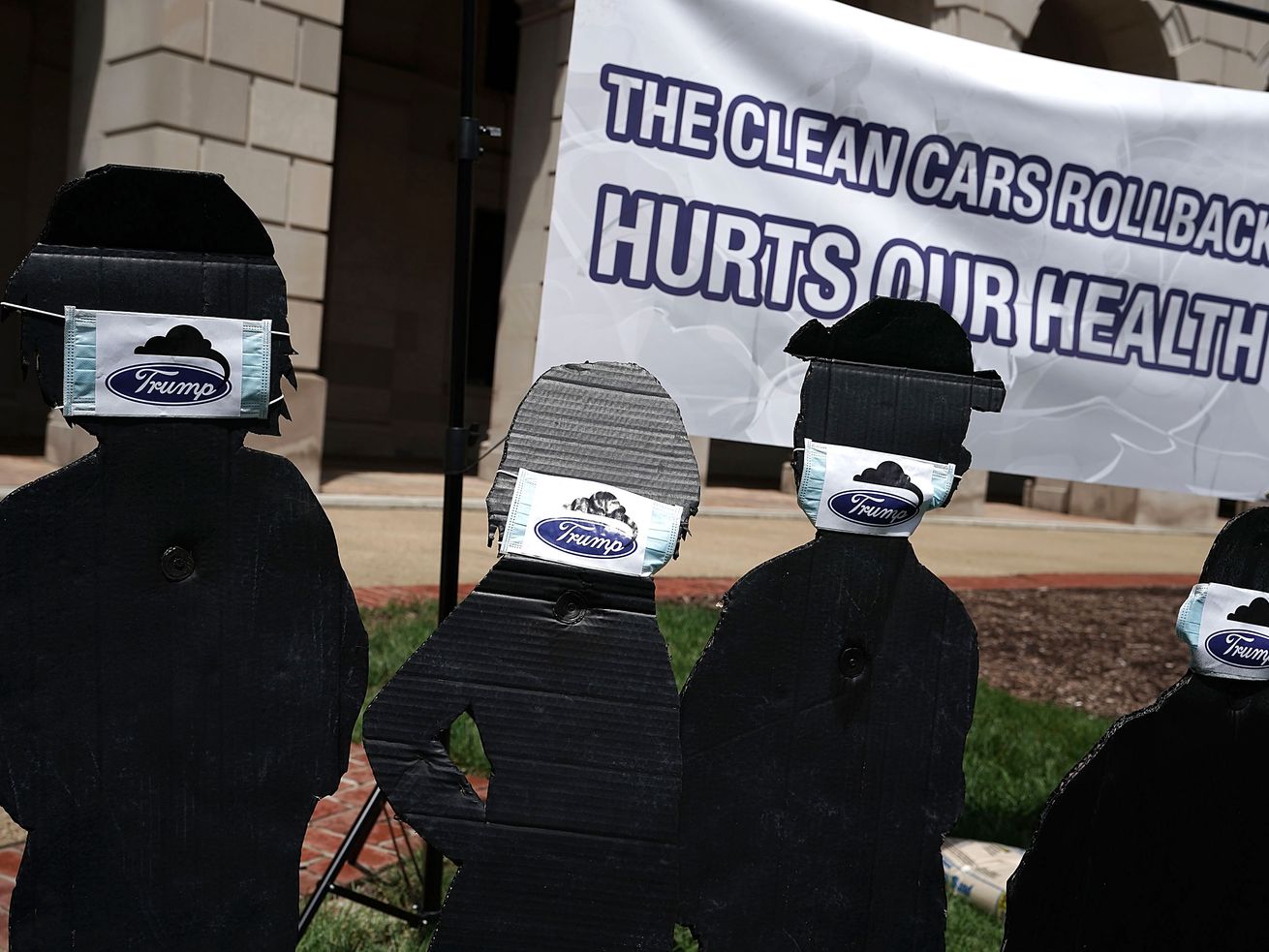 It’s just one of the worrisome changes that are poised to make America more dangerous for kids’ health.

The head of an Environmental Protection Agency office in charge of protecting children’s health was put on leave this week, a move she says is part of a Trump administration effort to “disappear” her office.

The New York Times first reported that Ruth Etzel, a renowned pediatrician and head of the Office of Children’s Health Protection, was removed from her post. And since then, a leaked email from Etzel suggested the worst fears of children’s health advocates may be true.

“I appear to be the ‘fall guy’ for their plan to ‘disappear’ the office of children’s health,” Etzel wrote Tuesday in an email obtained by BuzzFeed. “It had been apparent for about 5 months that the top EPA leaders were conducting ‘guerrilla warfare’ against me as the leader of OCHP, but now it’s clearly official.”

Perhaps you’ve never heard of Etzel or her office. It’s small, with a $2 million budget and only 15 full-time employees. But it has the huge responsibility of protecting the youngest people from environmental hazards. And pushing out the boss, a 30-year career employee, rang alarm bells for children’s health professionals.

“Dr. Etzel is a well-respected giant in the field of pediatric environmental health,” Mona Hanna-Attisha, associate professor of pediatrics at Michigan State University, told Vox. “Her role is critical to ensuring that children — who are disproportionately impacted by environmental burdens — are protected.” Removing her, Hanna-Attisha added, may be seen as “a threat to today’s children and generations of children who will bear the brunt of this anti-science and shortsighted disinvestment.”

Vox reached out to the EPA for comment about Etzel’s removal, and in an email, Donna Vizian, principal deputy assistant administrator of the Office of Administration and Resources Management, said, “We do not comment on personnel matters.”

Kevin Bogardus at E&E News reported Friday that the agency put Etzel on leave to review concerns about her leadership of the office:

.@EPA confirms Ruth Etzel, head of its Office of Children’s Health Protection, was placed on leave.

Why? To review “allegations” about her leadership of the office.

Statement from Chief of Staff Ryan Jackson below. pic.twitter.com/o6RRpXvzye

But Etzel’s ouster also appears to be part of a pattern across the Trump administration to repeal, dial back, or stall environmental regulations that were designed to protect kids’ health. Those moves come alongside other administration policies, on issues like immigration and public welfare, that stand to have severe health consequences for children.

There’s a reason the government has regulations in place specifically to protect kids. Little ones are more vulnerable to environmental toxicants; their bodies and brains are developing, and early exposures to harmful substances can have lasting impacts. As the EPA itself notes on its website, children are not little adults. Young people can also suffer lasting health problems from disruptions to nutrition, housing, health care, and family life.

Policymakers have historically recognized this, crafting rules to protect children from toxic chemicals, malnutrition, and abuse. The Trump administration’s attempts to soften or roll back these protections is especially jarring considering we live in a country where kids are already more likely to die before adulthood compared those in other high-income countries.

Here’s a quick rundown of what’s been happening, and four areas to watch.

In August, the Ninth Circuit ordered the EPA to ban the pesticide chlorpyrifos. But the Department of Justice this week tried to fight the ban and filed an appeal of the decision.

The pesticide is used to kill insects in nearly 100 countries across 8.5 million crop acres per year, making it the most widely used pesticide in agriculture. However, studies have found that chlorpyrifos causes brain damage in children. Researchers reported that its effects take root in utero and manifest when the child is older as lower intelligence and other neurological defects.

Health campaigners petitioned the EPA to determine that there is no safe exposure level for the chlorpyrifos, paving the way for a total ban.

Last year, then-EPA Administrator Scott Pruitt denied the petition, even though the agency’s own assessment stated the “EPA cannot find that any current tolerances are safe and is therefore proposing to revoke all chlorpyrifos tolerances.”

If the legal fight continues, the Supreme Court will have to weigh in on the chlorpyrifos ban.

Lead is a naturally occurring heavy metal found in mineral deposits in the Earth’s crust. It’s also a poisonous substance for humans. Inside the body, lead can slip into human cells easily and wreak havoc. In children, particularly those under the age of 10 or babies in the womb, the metal can pass through the blood-brain barrier and kill off brain cells. Children absorb up to five times as much lead as adults, and with their smaller bodies and developing nervous systems, it doesn’t take much to sicken them.

That’s why federal and local environmental policies have focused on reducing lead in our environment, and especially protecting children. It’s also why agencies like the Centers for Disease Control and Prevention have recently determined there’s actually no known safe blood concentration for children.

In 2017, the EPA asked for a six-year delay to update 17-year-old regulations on lead in paint and dust, including determining new standards on safe lead levels of lead exposure for children. In December, an appeals court forced the agency to finalize its updated standard within a year.

It’s not just trauma of separating children from their asylum-seeking parents at the border: Trump’s proposed immigration rules will harm the health of children of would-be green card holders, too — and the administration knows it.

On Saturday, the Department of Homeland security unveiled a draft regulation that would change how the government evaluates new green card holders, making it possible to deny entry to anyone who is likely to become “public charge.” As Vox’s Dara Lind explained, this could “change the face of legal immigration” in this country, depending on how the document, if finalized, is interpreted.

Lind writes: “the way the regulation is laid out, as long as an immigrant not reliant on social services, not making enough money doesn’t in itself count against an immigrant — she just doesn’t get points in her favor.”

Buried in the document is DHS’s own acknowledgment that the change will harm children. In a list of potential “follow-on effects” from the new policy, the document reads: “Worse health outcomes, including increased prevalence of obesity and malnutrition, especially for pregnant or breastfeeding women, infants, or children, and reduced prescription adherence.”

That’s because, as Lind explains, the new policy would send the “message that immigrants can be punished for using public benefits — and so they should play it safe and un-enroll, or not enroll at all.”

Of course, many of the things that harm adults also harm children, so the long list of environmental regulation rollbacks under the Trump administration also pose risks for kids, even when the rules aren’t specifically meant to protect the young.

Air pollution, for example, is particularly hazardous to children, exacerbating infant mortality, asthma, and developmental delays. Earlier this year, the EPA took steps toward deregulating major sources of toxic air pollution. The agency is also relaxing emissions and fuel economy standards for cars, one of the largest sources of air pollution.

Many of these proposals haven’t taken effect, and some have been shot down in the courts as environmental groups, states, and activists have challenged the federal government’s rollbacks of environmental protections. But the administration remains dogged in its deregulatory agenda, so expect more attempts to relax rules that protect the health of the youngest Americans.