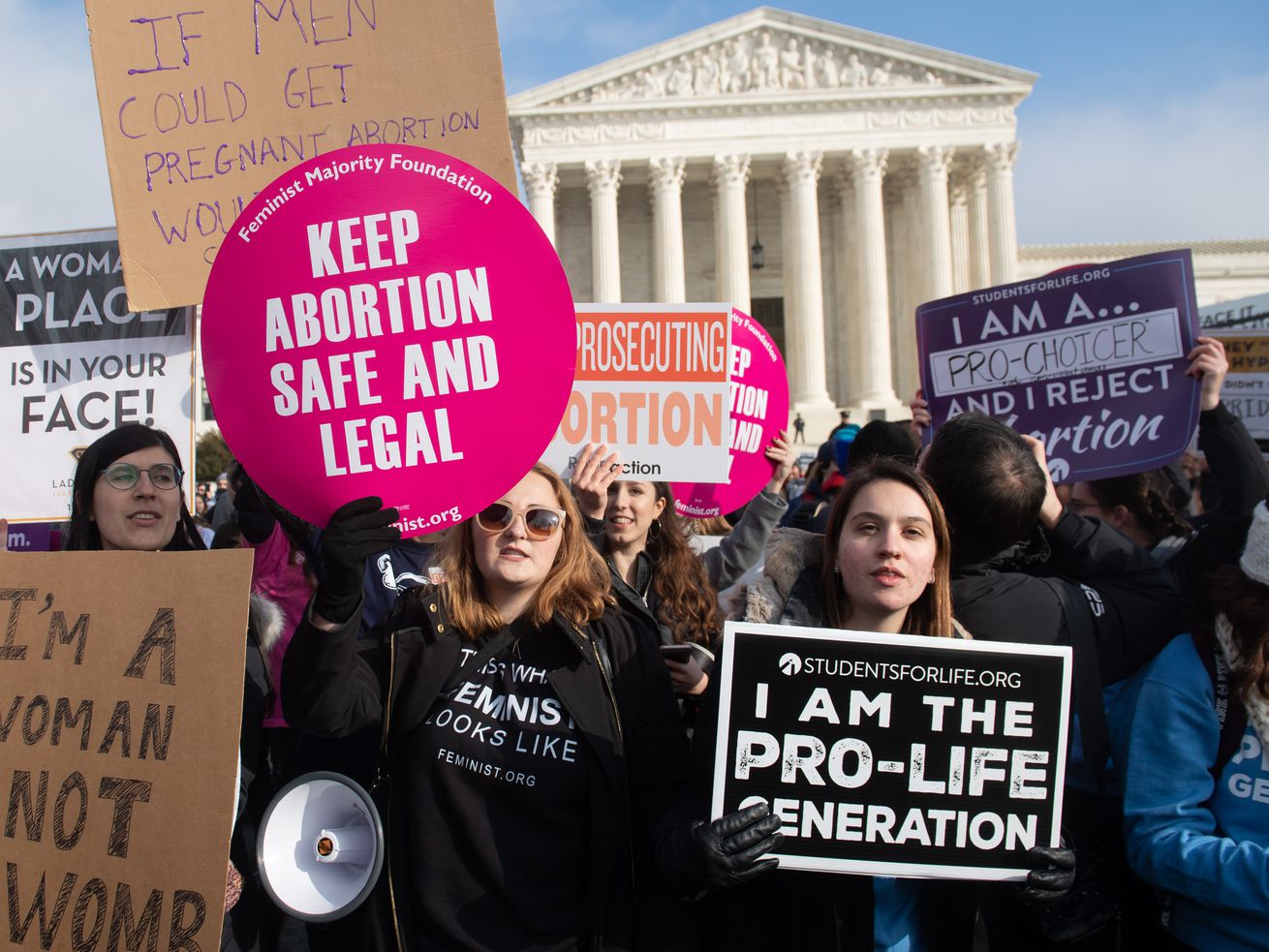 A Democratic state representative from Alabama shocked listeners nationwide this week when he argued against an abortion ban by saying “some kids are unwanted, so you kill them now or kill them later.”

“You bring them into the world unwanted, unloved, then you send them to the electric chair. So you kill them now or you kill them later,” state Rep. John Rogers said on Tuesday, apparently talking about black children in Alabama.

Rogers was arguing against a bill that would ban abortion outright in Alabama, and allow punishments for abortion providers up to 99 years in prison. The bill passed the Republican-controlled House on Tuesday and now moves to the Senate, according to CNN.

Rogers’s comments, which were captured on video by the local news channel WVTM, sparked criticism from observers across the political spectrum.

“Not only were his remarks reprehensible, they are a complete distraction from the real work still left to be done in this state,” said Staci Fox, president and CEO of Planned Parenthood Southeast Advocates, in a statement to media on Thursday. “The people of Alabama deserve better.”

Donald Trump Jr., meanwhile, described the comments on Twitter as “stomach curling.” Rogers then sparked further backlash by calling him “retarded” and saying he should have been aborted.

Rogers’s comments come just a few months after Virginia Gov. Ralph Northam, also a Democrat, touched off a nationwide controversy with confusing comments on an abortion bill in his state. Northam said that after a baby is born, a “discussion” could occur between parents and doctors about what to do next, which some critics took as an endorsement of infanticide. His remarks helped give rise to a wave of bills to protect abortion “survivors” around the country, which abortion rights supporters say could criminalize doctors. Meanwhile, total abortion bans like the one in Alabama are also proliferating around the country, as are “heartbeat” bills that could ban the procedure as early as six weeks.

It’s not clear whether Rogers’s comments will have the same reach as Northam’s. But they appear to have had the opposite of the effect he intended — drawing criticism of the abortion rights cause and pulling attention away from the problems, including lack of health care access, that are killing Alabamians.

Rogers was trying to support abortion rights. Instead, he created a nationwide firestorm.

Rogers, who has represented Alabama’s 52nd District in the state House since 1982, made his comments on the House floor Tuesday in opposition to Alabama HB 314, which would make performing an abortion a Class A felony in the state. The bill does not include exceptions for rape or incest.

He led up to his inflammatory remarks by talking about black children in the state who are taken from their parents by Child Protective Services and end up committing crimes, going to prison, and being executed.

“They get in trouble, and we electrocute them,” he said. “Whether you kill them early, or kill them later, doesn’t matter.”

Rogers also said that the decision to get an abortion should “be a woman’s choice” and that “some old men shouldn’t be sitting around telling a woman what to do with her body.”

The backlash to Rogers’s comments about killing was swift.

“Representative Rogers’ remarks are chilling,” said Alabama Senate Majority Leader Greg Reed in a statement on Wednesday. “His comments should be condemned at the state and national level.”

“Americans are justly outraged by John Rogers’ vile comments, but we should be no less outraged by the reality that abortion kills children,” said Marjorie Dannenfelser, president of the anti-abortion group Susan B. Anthony List, in a statement on Friday.

Donald Trump Jr., meanwhile, tweeted that “every Democrat running for President needs to be asked where they stand” on Rogers’s comments.

This is stomach curling and makes Ralph Northam look like a moderate on abortion.

Every Democrat running for President needs to be asked where they stand on this. The extreme turn we’ve seen from Dems on abortion recently is truly sickening. https://t.co/KchZfqvQMK

Rogers, who has not responded to Vox’s request for comment, explained his comments on Thursday in an interview with Alabama news website AL.com. He implied that lawmakers were hypocritical for wanting to ban abortion when other policies and proposals in Alabama, such as hospital closures, mass incarceration, and forced drug testing for food stamp recipients, could result in the deaths of residents.

“The state of Alabama is killing people every day,” he said. “You’re going to tell a woman she can’t make a decision about incest and rape? She can’t have an abortion? That’s a woman’s choice.”

But Rogers was more combative in responding to Trump Jr. in an interview with WVTM.

“His mother should have aborted him when he was born and he wouldn’t have made that stupid statement,” Rogers said. “He’s evidently retarded.”

“Sadly, vile comments like this have become par for the course for the Democrat Party,” said a spokesperson for Trump Jr. in response, according to Newsweek. “I hope every elected Democrat in the country has the common decency and moral courage to disavow these types of grotesque statements from members of their party.”

Democrats and abortion rights groups have disavowed the comments. Alabama Democratic Sen. Doug Jones tweeted that Rogers “does not speak for the people of Alabama.”

The rhetoric of Rep. John Rogers gets more appalling each time he speaks. He does not speak for the people of Alabama and is in fact offending all Alabamians with his crude and reprehensible comments. https://t.co/ZLI8e83Z2d

“As we speak, Alabamians are dying from real public health problems that need our attention and we will not allow one man’s repulsive rant to distract us from the real issues at hand,” said Fox, the Planned Parenthood Southeast Advocates president.

Rogers’s comments are reminiscent of comments made by Northam in January, over a bill that would have broadened the circumstances under which a patient could get an abortion in the third trimester of pregnancy.

In an interview about the abortion bill, Northam was asked to respond to a state legislator’s statement that the bill would allow an abortion if a woman is in labor (experts say that abortions during labor essentially never happen, and the legislator later said she “misspoke”).

The comments were confusing, and some believed the governor was endorsing infanticide, though a spokesperson told Vox that was “absolutely not” the case. Northam’s comments became a nationwide controversy and helped lead to a Senate vote on the Born-Alive Abortion Survivors Protection Act, which would have required doctors to provide the same care to an infant born alive after a failed attempt at abortion as they would provide for any infant born at the same gestational age. Critics said the bill could hamper doctors’ ability to practice, and was unnecessary because infants are already protected by existing laws.

The bill failed, but similar bills have been proposed at the state level, and President Trump has repeatedly referred to Northam’s comments in speeches, as part of a misleading claim that doctors around the country are killing babies after birth.

It’s hard to know whether Rogers’s comments will have the same staying power. But they come at a time when lawmakers around the country are pushing bills like the one in Alabama. Eight states have introduced total bans on abortion, and many others have passed or are considering “heartbeat” bills, which ban abortion after a fetal heartbeat can be detected, which can be as early as six weeks’ gestation.

Meanwhile, Supreme Court Justice Brett Kavanaugh is widely viewed as a potential deciding vote to overturn Roe v. Wade, and advocates on both sides of the abortion issue are preparing for a future in which abortion rights are no longer protected on a national level.

Abortion rights advocates say Rogers is right about one thing: Alabamians are dying because of lack of access to health care. But, they argue, banning abortion in the state would only make matters worse.

“Banning abortion care will put women’s lives at risk in a state that already sees some of the worst health outcomes for women in the country,” Dr. Leana Wen, president of Planned Parenthood Federation of America, told Vox in a statement. “If the politicians pushing this ban truly valued the lives and well-being of their constituents, they would work to address Alabama’s cervical cancer rates, a maternal and infant mortality crisis and an OBGYN shortage, all of which are some of the worst in the country.”

With his comments, Rogers appears to have been intending to highlight the crises facing residents of his state. But he may have drawn attention to his own words instead, at a time when debate around abortion rights is exceptionally contentious and the stakes are exceptionally high.