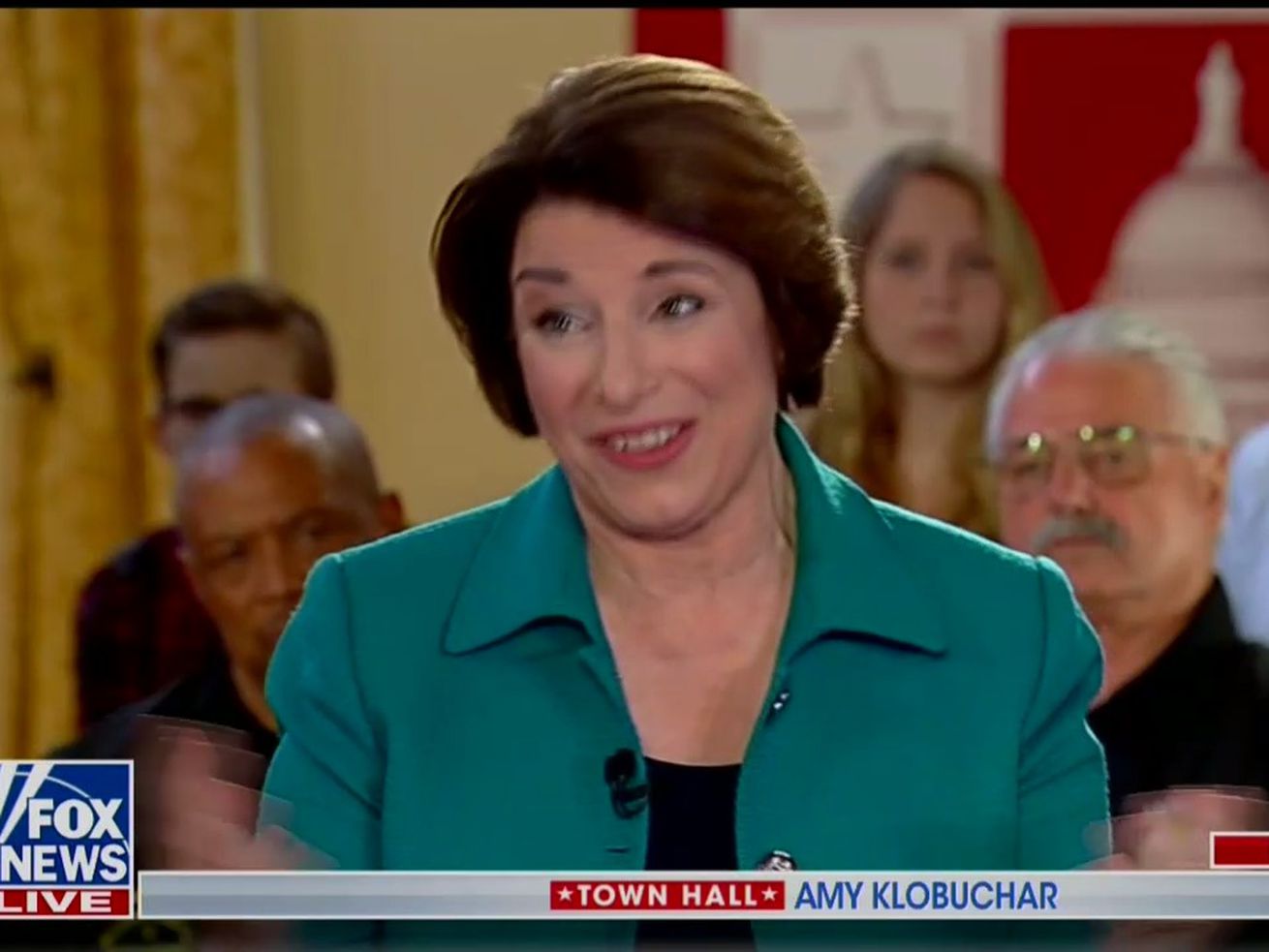 Fox News’s Bret Baier tried to catch her in hypocrisy. Here’s her reply.

Fox News’s live town hall with Sen. Amy Klobuchar (D-MN) on Wednesday night featured an interesting exchange where moderator Bret Baier tried to use Klobuchar’s support for her former colleague Al Franken, who resigned over sexual harassment allegations in December 2017, and her opposition to Supreme Court nominee Brett Kavanaugh against her:

BRET BAIER: I want to follow up on due process. When you say for Al Franken there should’ve been more due process in that situation, you also say he deserves a third act in his career. Do you believe that in some aspects the #MeToo movement has gone too far?

AMY KLOBUCHAR: I do not think it’s gone too far because I think we still have harassment going on in the workplace. One case isn’t exactly like the other. Add for anyone that is accused of harassment, you can edge over to criminal acts which is a way different situation, rape, things like that.

You have to have a process in your workplace so you figure out, get the facts, managers do, people do, people have a right to bring their cases forward, and you make a decision on how they are handled. That’s what I meant by that and I think it should apply to Congress and it should apply to every workplace in Wisconsin and across our country.

Klobuchar did decline in December 2017 to call for Franken’s resignation — but she also stated when he resigned that he was doing the right thing, that his sexual harassment of others was wrong, and later that his “third act” might not necessarily be in politics. Her response to Baier was in that vein.

AMY KLOBUCHAR: I’m only smiling because, like, he got a really good job out of the whole thing. He’s, like, on the Supreme Court of the United States. Yes, I think he did. He had a process, and that process was a hearing before the Senate. And that hearing went on and evidence came out, and that was evidence from Dr. Blasey Ford. She came forward with her story.

It’s a fair point. Kavanaugh did have a formal process before the Senate Judiciary Committee, and far from being treated as innocent before being proven guilty, he was given one of the nine most powerful positions in the US judiciary and suffered no lasting professional repercussions for his alleged actions.

Klobuchar also took the opportunity to defend her questioning of Kavanaugh, noting that she asked if he ever blacked out because she wanted to reconcile his denial of attacking Christine Blasey Ford with Ford’s recollection. She repeated her observation that Kavanaugh’s behavior reminded her of her father, a recovering alcoholic:

What bothers me is after my colleague said she was credible, hearing this basic, political, I think, response. He has a right to put his story on, but basically politicizing the whole judiciary with how he acted. I disagreed with that, and I was very surprised where I was simply trying to match his story with her story. You know, people can blackout and you don’t remember what happened. Instead of just answering that question, he went right at me and said, you know, basically have you blacked out, do you drink beer, and all these things.

I decided I could’ve gone down there with him but I decided, in my head, maybe a trickle of my dad, I said, I’m taking the keys away from you, I’m not going down here with you.

Baier tried one more time, only to be shut down:

BRET BAIER: I was asking from the standpoint of [whether] you think there’s a difference from how you look at the Al Franken thing and look at the Brett Kavanaugh…

AMY KLOBUCHAR: No, I don’t think so. I had reasons to not vote for Brett Kavanaugh related on how he had handled the consumer cases, how he handled antitrust cases and executive power. I said he was not going to vote for him earlier before that.

This is potentially tricky ground for Klobuchar, specifically, to tackle. Many other Democrats, but especially Sen. Kirsten Gillibrand (D-NY), vocally spoke out against Franken for his behavior, and called on his resignation. But Klobuchar, as a fellow Minnesotan senator, held back initially, and questioned Kavanaugh rigorously on his alleged behavior a year later. She herself also faces several accusations of (nonsexual) workplace harassment. And with President Donald Trump himself facing numerous sexual harassment allegations, accusations of hypocrisy are likely to be a major tool for the GOP and allied media like Fox in the coming general election.

Klobuchar resisted that attack. Kavanaugh, she noted, got due process. He also disqualified himself, in her view, in a variety of ways unrelated to his conduct toward Ford. And her consistent view is that you have to evaluate allegations in context and give them a fair hearing.

Her response arguably gave short shrift to the (multiple, and serious) accusations against Franken, and too much support to the sexist narrative that he was railroaded on fake charges. But it was also a preview of an approach that multiple candidates are likely to take as this comes up in 2020.