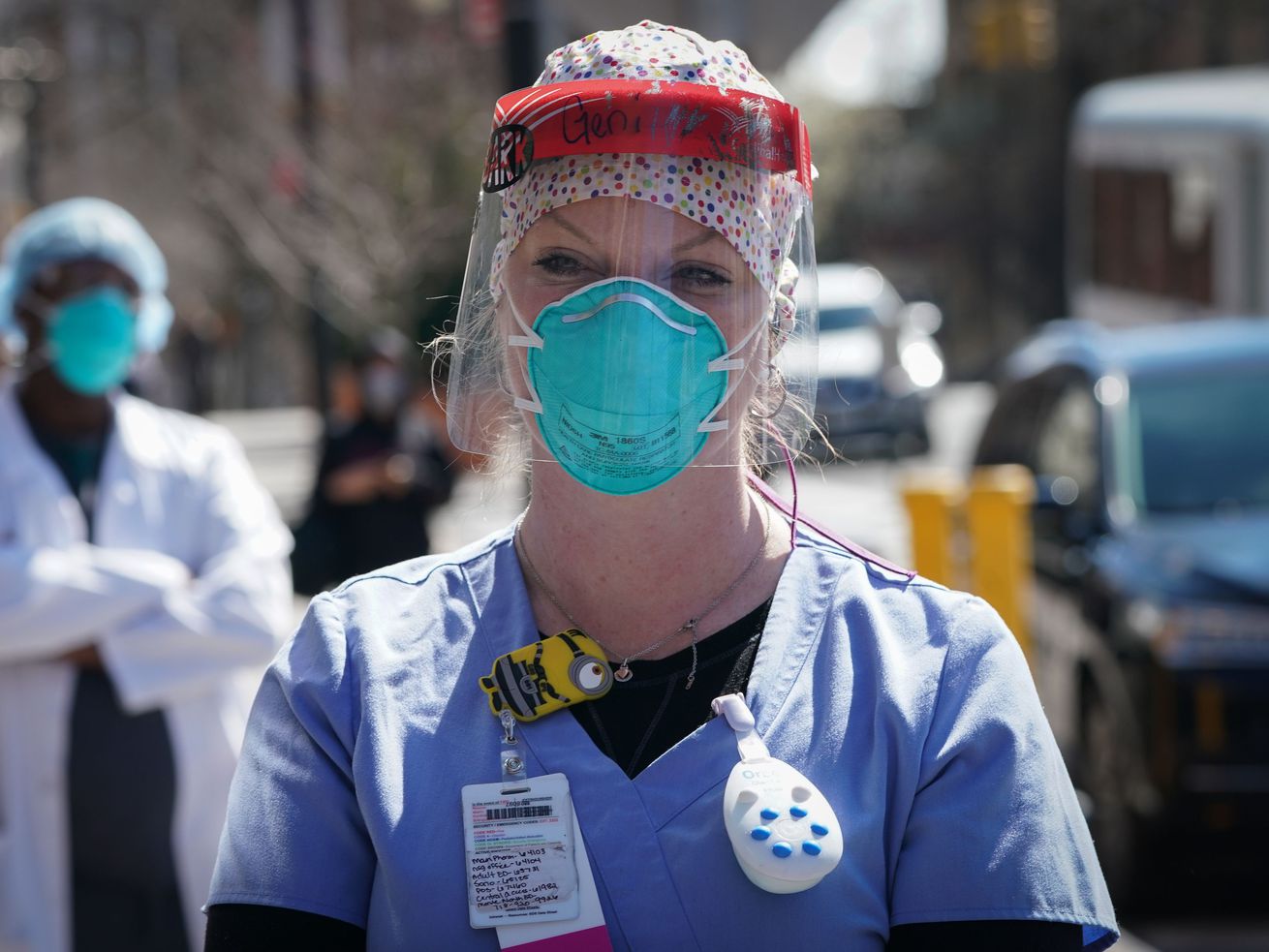 A member of the medical staff listens as Montefiore Medical Center nurses call for N95 masks and other critical PPE to handle the coronavirus pandemic on April 1, 2020, in New York. | Bryan R. Smith/AFP via Getty Images

Five months into the pandemic, the Trump administration hasn’t taken charge of a supply chain that’s been stretched thin.

In the early weeks of the pandemic, it was nearly impossible to buy N95 masks. These masks, unlike surgical masks or cloth masks, are tight-fitting and filter airborne particles that can carry the virus, making them a key source of protection for health care workers, some of whom have died after being exposed to Covid-19 at their medical facilities. Now, as the United States continues to reopen and the number cases and hospitalizations surge, that troubling shortage of personal protective equipment — and especially N95 masks — is once again a problem.

A survey from the National Nurses Union found that 85 percent of nurses reported being asked to reuse personal protective equipment that’s meant to be single-use. At one private clinic in Arizona, medical workers are treating Covid-19 patients without being given any N95 masks, according to the New York Times. The shortage is so dire that the inventor of the powerful filtration material in these masks has come out of retirement to look for ways to decontaminate his invention and make them safer for reuse.

But why is there still a shortage? Despite months of shutdown that were meant to reduce pressure on the health care system and give the US more time to prepare, production for personal protective equipment, which includes N95 masks, medical gowns, and medical gloves, never adjusted to meet the massive demand caused by the pandemic. At the same time, reopening in many states has meant that other businesses, like outpatient medical offices and construction firms, are now in search of N95 masks too. Meanwhile, the recent surge in Covid-19 cases that has followed reopening is almost certainly leading to a greater need for protective equipment in hospitals, especially in the places currently experiencing massive outbreaks, like Florida and Texas.

In early April, Donald Trump invoked the Defense Production Act (DPA), which allows the federal government to order private companies to produce needed supplies, to obtain more masks produced by 3M, one of the major American mask manufacturers. Later that month, the Department of Defense announced several other contracts for N95 masks. But as it becomes increasingly evident that these measures weren’t enough, organizations like the National Nurses United, a nationwide nurses union, and the American Medical Association have in recent weeks called for the Trump administration to use the law more aggressively to address the PPE shortage.

Earlier this week, presidential candidate Joe Biden released a supply chain plan for Covid-19 that calls for more broadly invoking the DPA, in part to deal with the ongoing shortage of N95 masks. “The Trump administration is still dragging its feet on using the DPA to produce urgently-needed supplies to combat the COVID-19 pandemic, and has fallen far short of the domestic mobilization we need,” the plan says.

“There was sometime in May where I felt like it was getting to more of a steady state,” Anne Miller, the sourcing lead for Project N95, a protective equipment clearinghouse established during the pandemic, told Recode. “The whole tenor of everything seems to be ramping back up again, and we see lots of requests for N95 respirators, isolation gowns, and surgical masks.”

A growing number of cases is increasing demand

Since states across the country have moved toward full reopening, the coronavirus crisis has arguably gotten worse than it has ever been. On July 9, the US saw nearly 60,000 new Covid-19 cases. In a majority of US states, Covid-19 cases are increasing, according to the New York Times, and outbreaks risk overwhelming some rural hospitals and smaller cities that weren’t prepared for the pandemic.

“It feels like right now we see more demand this week than we did last week, and I think we will continue to see that,” said Miller, who expects that reopening schools and universities will also cause another surge in cases, though she notes that heightened demand for N95 masks never really went away.

But national coordination of a supply chain was never set up to effectively distribute personal protective equipment and other supplies, despite calls for the federal government to step in. The National Strategic Stockpile didn’t have a large amount of backup supplies to begin with, and it wasn’t set up to respond to the full needs of a pandemic. Without leadership from the federal government — which insisted that supplies should be handled on the local and state level — governors and hospital systems have been arranging their own private purchases of personal protective equipment, often directly competing with one another. It’s an approach that Illinois Gov. J. B. Pritzker recently likened to the Hunger Games.

When the pandemic first started, the country’s primary concern was getting protective equipment to hospital health care workers who were treating Covid-19 patients. But as the country opens back up, people working in medical and dental offices, as well as other industries like construction, are looking for N95 masks too.

Michael Einhorn, the president of the medical supplier Dealmed, said there’s also an understandable incentive for medical facilities to buy more safety stock beyond what they need for present day-to-day operations. He points to efforts like New York Gov. Andrew Cuomo’s 90-Day Supply Goal as an example. That guidance urges health care facilities to have in stock enough protective equipment to last about three months.

“There are biopsies that need to take place. People need to get screened and tested. There are people out there that need treatment outside of Covid,” Einhorn told Recode. “These facilities that treat these patients don’t have access to N95s, and it’s a very big problem.”

At the end of June, the American Medical Association (AMA) sent a letter to the Federal Emergency Management Agency (FEMA) emphasizing that doctor’s offices and practices outside of hospital systems were struggling to get access to personal protective equipment. James Madara, the AMA’s CEO and executive vice president, raised the alarm about “growing concern” from doctors about shortages and said that despite pleas to Congress, “a remedy remains elusive.” In fact, the problem in outpatient medical facilities was bad enough that Madara also sent a letter to Vice President Mike Pence, asking the administration to invoke the Defense Production Act.

“Without adequate PPE, physician practices may have to continue deferring care or remain closed, which will continue to have a dramatic impact on the health of their patients,” Madara wrote.

One major challenge is that many of these medical facilities don’t typically buy in bulk the way large hospital systems do and aren’t used to buying protective equipment for their daily operations. One doctor told a local paper in Pennsylvania that if his surgery center and clinic were to reach full capacity, it would only have enough PPE to last a week or two and would then have to shut down.

The supply chain is still riddled with problems

On its own, the US simply isn’t producing enough N95 masks and other protective equipment to meet demand, despite major producers like 3M and Prestige Ameritech ramping up production. Even before the pandemic, the US relied significantly on imports, especially from China, and many point to a lack of leadership and coordination in the early months of the pandemic as a cause for the ongoing shortages.

The federal government actually turned down an early offer from Prestige Ameritech to produce millions of masks early this year, according to the Washington Post. Leading companies in the medical equipment distribution industry also told members of Congress that between January and March, the administration gave them little effective guidance, and there’s still no national coordination of a supply chain.

At the beginning of the pandemic, finding a steady and trustworthy supply of N95 masks was difficult. Hospitals ended up with counterfeit and otherwise unreliable products, while others placed orders for masks that would never arrive. There was also price gouging and hoarding, and a growing number of new, and often unreliable, suppliers attempting to take advantage of desperate buyers.

The murkiness of the supply chain has improved somewhat, though issues remain. Miller, who has kept an eye on the gray markets for protective equipment, said that many “opportunistic players have been winnowed out of the market.” The ones that remain are more reliable, and payment terms for bulk purchases have begun to return to normal. Dealmed’s Einhorn said that hospitals and buyers have become more aware of unreliable orders and the risk of counterfeit or otherwise suspicious products.

“Our government has basically said that we’re going to allow the free economy to fix the issues,” Val Griffeth, an Oregon-based doctor who co-founded a nonprofit PPE effort called Get Us PPE, told Vox last month. “Unfortunately, it takes time and capital to ramp up production, and because the government has not devoted capital to helping solve the situation, we’re seeing a delay in its resolution.”

In fact, officials don’t seem to think shortages are as significant as some medical workers have said. Vice President Mike Pence on Wednesday said that the supply of PPE is “very strong” and encouraged medical workers to re-use products.

“I’m not going to tell you we’re able to meet all demand, but there’s significantly less unfulfilled orders today than in April,” the navy official who is overseeing medical supplies distributed by the federal government, John Polowczyk, told the Washington Post in early July. “I don’t have the sense of there being severe shortages.”

It’s difficult to estimate exactly how bad the national shortage is at scale, but direct reports from medical facilities are alarming. Doctors at a medical center in Houston told the New York Times they’ve been instructed to reuse N95s for up to two weeks. A family physician in Virginia, who is on the state’s testing task force, told local news that surgical masks continue to be used unless they become dirty, and disposable gowns are also reused. In Bradenton, Florida, nurses have protested because, they say, they’re not given enough proper protective gear and aren’t updated about patients’ Covid-19 statuses.

If cases continue to surge, there’s no doubt that concerning reports like these almost certainly will, too.