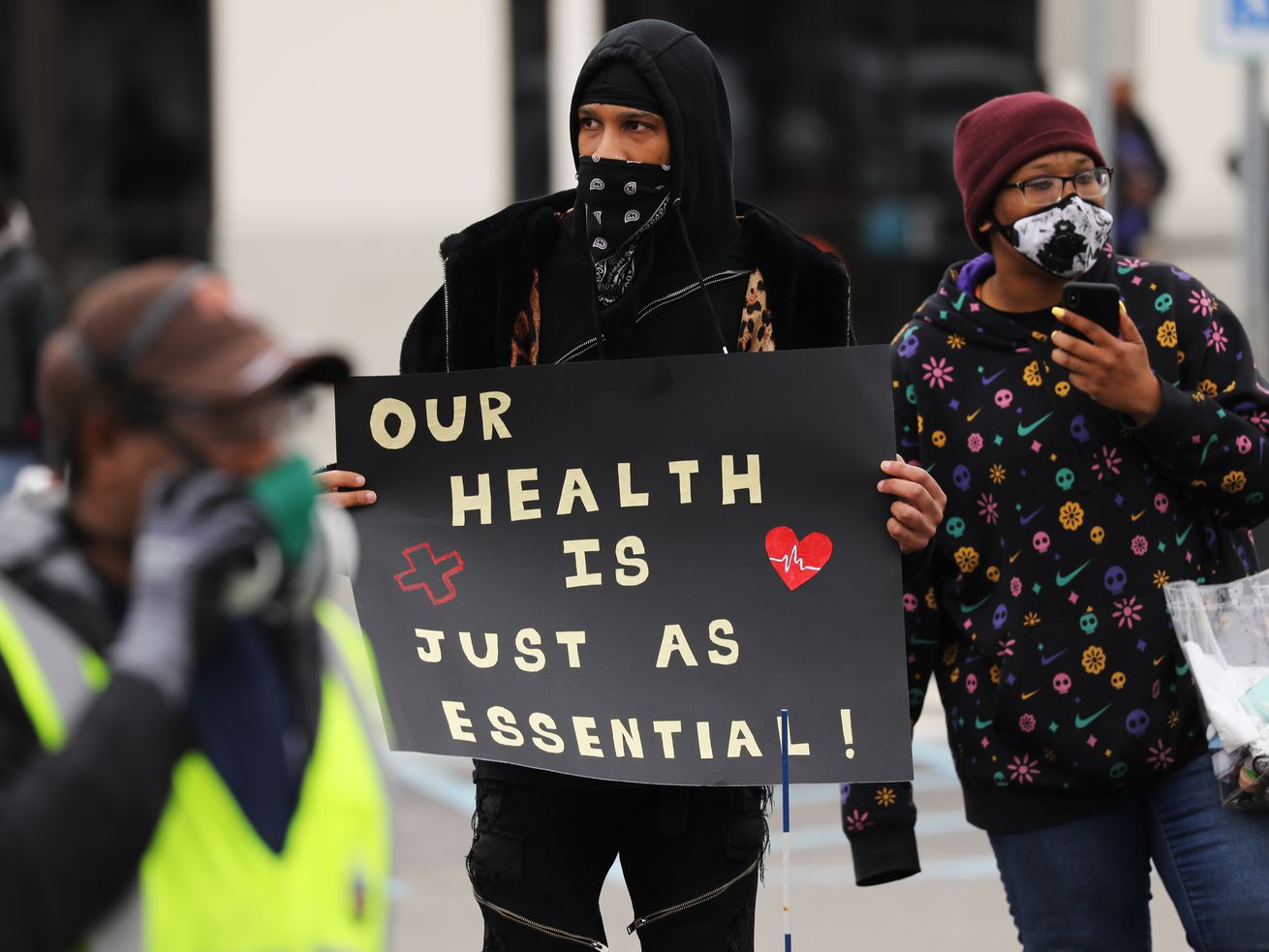 On Wednesday, Amazon’s top lawyer sent an email to his staff expressing support for the Black Lives Matter movement. But the note did not address a recent controversy involving this same lawyer, who had made what many of his Amazon colleagues saw as racist comments in notes from a high-level executive meeting where he strategized how to combat complaints from a black Amazon warehouse worker who says he was fired for protesting over working conditions during the pandemic.

Amazon general counsel David Zapolsky addressed the police killing of George Floyd and broader racial injustices in an email to his global legal staff on Wednesday, but the tech giant’s top lawyer avoided mentioning his leaked statements from April, in which he referred to the fired worker as “not smart, or articulate.” Those original comments sparked anger from Amazon employees, who felt Zapolsky’s choice of words was at best offensive, and at worst racist.

Zapolsky had used that language to describe Amazon employee Christian Smalls, whom the company fired in March on the day he led a small employee walkout at an Amazon warehouse in Staten Island, New York. Amazon said Smalls violated the company’s instructions to remain home on paid quarantine leave after he came into contact with a colleague who tested positive for Covid-19. Smalls says he was fired for organizing the walkout and speaking out about his concerns over the safety of Amazon workers during the pandemic.

Zapolsky’s email on Wednesday had the subject line “Black Lives Matter,” and in it he wrote that “the images and accounts of violence, discrimination, and racist aggression against Black people are reprehensible and harrowing.”

“Like many of you,” he added, “I have been reading and listening to many voices responding to this most recent spate of racial injustice. I don’t presume to be able to add much to those conversations, which is why I have hesitated to write until now. But I do tend to agree with those who argue that the most constructive things that people who are privileged not to face this oppression in their daily lives can do, at least in the short term, are listen and learn from those who do, redouble our commitment to be more effective antiracist allies and advocates, and support organizations and individuals seeking to address and mitigate racial oppression, police violence, and structural racism in our society.”

Zapolsky closed that section of the email by saying, “That is what I am trying to do and intend to keep doing as we move forward.”

The top lawyer also said he made personal donations to the same 11 organizations that Amazon recently did, which, in different ways, “fight against systemic racism and injustice.” He added that he welcomed input from his staff on other organizations to consider supporting.

But Zapolsky’s email was not well-received by some of his staff, an employee in Amazon’s legal division told Recode.

“This is the first time we’ve heard comments from legal leadership on these issues after David’s leaked email, which was not address or acknowledged in any way by David or other legal VPs,” the Amazon employee told Recode. “It’s hard to see this as genuine when he has not addressed his offensive and arguably racist comments from the leaked memo.”

Zapolsky ended his email by telling employees they should feel free to contact him on his cellphone “even if you just want to talk, ask any question, share ideas or feedback, or just vent.” The same current Amazon employee told Recode that it’s hard to imagine staffers taking Zapolsky up on his offer.

In a phone call with Recode on Wednesday, Smalls, the fired warehouse employee whom Zapolsky targeted in the leaked meeting notes, was at a loss for words when he heard the content of Zapolsky’s email.

“That is ridiculous. That is insulting. I don’t even know what to say,” Smalls said.

“I’m surprised that he thought that he could even speak on it,” he added.

In a follow-up text message to Recode, Smalls said: “Have him apologize publicly if he really cares about Black people.”

When Vice first published Zapolsky’s meeting notes in April, they revealed how Amazon leadership planned to try to position Smalls as the face of the anti-Amazon labor movement.

“He’s not smart, or articulate, and to the extent the press wants to focus on us versus him, we will be in a much stronger PR position than simply explaining for the umpteenth time how we’re trying to protect workers,” the notes said.

“We should spend the first part of our response strongly laying out the case for why [Smalls’s] conduct was immoral, unacceptable, and arguably illegal, and only then follow with our usual talking points about worker safety,” Zapolsky added in the notes, according to Vice News. “Make him the most interesting part of the story, and if possible make him the face of the entire union/organizing movement.”

After the leak, Amazon issued a statement on Zapolsky’s behalf that did not reference what many Amazon employees, and some politicians such as Rep. Alexandria Ocasio-Cortez (D-NY), saw as racist undertones. It also did not include any of the words “sorry,” “apologize,” or “regret.”

The statement read, “My comments were personal and emotional. I was frustrated and upset that an Amazon employee would endanger the health and safety of other Amazonians by repeatedly returning to the premises after having been warned to quarantine himself after exposure to virus Covid-19. I let my emotions draft my words and get the better of me.”

Amazon spokesperson Dan Perlet told Recode at the time that Zapolsky, who is white, did not know that Smalls was black when he wrote up the meeting notes.

Some Amazon white-collar employees fumed at the time that it is “absolutely disgusting that they would talk about a coworker like that. I highly doubt they would have used those words if he was a white employee.”

An Amazon spokesperson declined to comment on Zapolsky’s Wednesday email. The full text of the email is below:

Most of you are aware of the events we have been reading about, seeing, and experiencing in communities across the United States over the past few weeks. The images and accounts of violence, discrimination, and racist aggression against Black people are reprehensible and harrowing. Tragically, they are also not new. The list of victims is very, very long — the injustices against George Floyd, Breonna Taylor, Ahmaud Arbery, Nina Pop, Tony McDade, and Christian Cooper are just a few examples from just the past few months. Horrifyingly, there are more each day, like David McAtee, killed Monday by Louisville police who apparently ignored orders to wear body cameras. It’s horrifying, painful, and we must find a way to end it. Black Lives Matter.

Like many of you, I have been reading and listening to many voices responding to this most recent spate of racial injustice. I don’t presume to be able to add much to those conversations, which is why I have hesitated to write until now. But I do tend to agree with those who argue that the most constructive things that people who are privileged not to face this oppression in their daily lives can do, at least in the short term, are listen and learn from those who do, redouble our commitment to be more effective antiracist allies and advocates, and support organizations and individuals seeking to address and mitigate racial oppression, police violence, and structural racism in our society. That is what I am trying to do and intend to keep doing as we move forward.

On Sunday, Amazon posted the following message to our blog and various social channels: “The inequitable and brutal treatment of Black people in our country must stop. Together we stand in solidarity with the Black community — our employees, customers, and partners — in the fight against systemic racism and injustice.”

This morning, Amazon announced donations totaling $10M to the organizations listed below, which, in different ways, seek [to] achieve these goals. I have also made personal donations — to these and other organizations, and I welcome discussion and input as to others worth supporting.

One striking theme that many of these organizations share is that they seek to achieve change by asserting and enforcing rights through the legal system — a longstanding and powerful tradition of the civil rights movement in this country. I know that some in our department are exploring ways to participate in the work of these and other organizations on a pro bono basis in connection with the current protests and other reform efforts, and I welcome and encourage such participation.

Finally, I also wanted to make sure you saw Jeff’s Instagram post from Friday, which amplified an article about how many of our Black colleagues are feeling right now. This is an extraordinarily difficult time. We all need to give each other support and space as we move through this period, particularly managers. And we will.