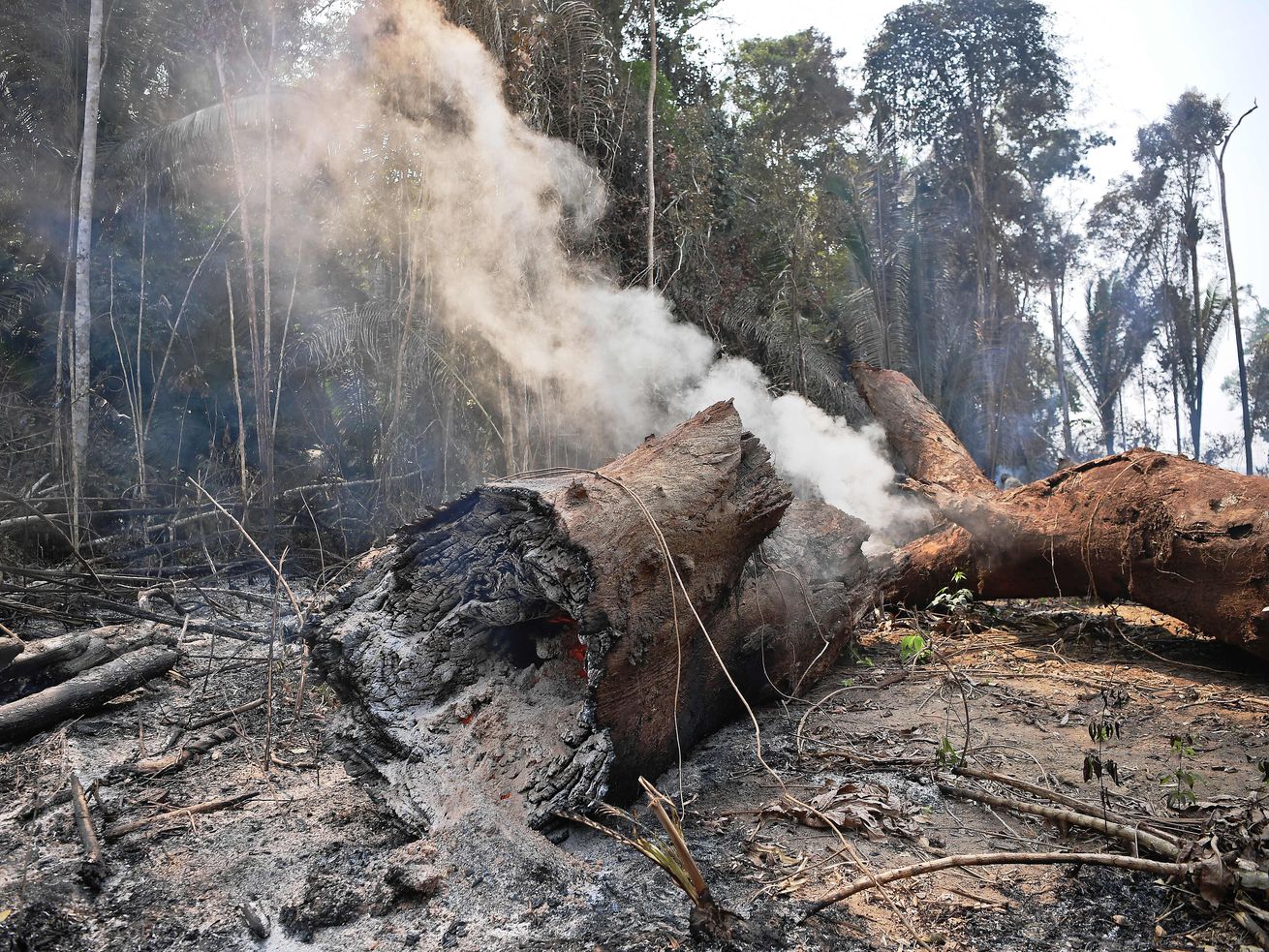 Last week, Brazilian President Jair Bolsonaro said the country lacked the resources to fight the fires ravaging the Amazon rainforest. Now, he has sent 44,000 troops to battle the flames.

The Brazilian military began an operation on Saturday to fight the fires that have both ravaged huge swathes of the Amazon rainforest for two weeks and threatened to ignite global political disputes.

Military aircraft and about 44,000 troops are being deployed across six Brazilian states struggling with the fires. President Jair Bolsonaro, a strongman who entered office in January on a far-right nationalist platform, authorized the operations on Friday, following international protests against his administration’s handling of — and its possible role in contributing to the scale of — the wildfires.

The move came two weeks after the fires began, and shortly after French President Emmanuel Macron threatened to block a trade deal with a South American bloc that includes Brazil over Bolsonaro’s lack of concern about the crisis.

Bolsonaro has accused non-governmental organizations of starting the fires — while declining to provide any evidence they are responsible — and as recently as Thursday claimed his government didn’t have the resources to even try suppressing the flames.

But pressure mounted on the Brazilian president as Macron accused Bolsonaro of lying to his face about plans to protect the Amazon and as photos showing the extent of the devastation — including blackened skies above Sao Paulo, some 1700 miles from the fires — began spreading across social media.

Just a little alert to the world: the sky randomly turned dark today in São Paulo, and meteorologists believe it’s smoke from the fires burning *thousands* of kilometers away, in Rondônia or Paraguay. Imagine how much has to be burning to create that much smoke(!). SOS pic.twitter.com/P1DrCzQO6x

The fires come amid rollbacks to environmental protections in Brazil

Although fires are not uncommon during this time of year in Brazil, 77,000 fires sparked this year, more than doubling the scale of the fire season during 2018. And unlike the forest fires common in North America, they should not be considered a natural phenomenon, Mark Cochrane, an expert on wildfire and ecology at the University of Maryland, told the New York Times: “All of the fires in this region are caused by people.”

Across its 550 million hectares (one hectare is about the size of two soccer fields), more than 74,000 fires have started in the Amazon this year to date, an 84 percent surge from the year before, according to Brazil’s National Institute for Space Research (INPE). Fires are a natural part of many ecosystems, but not in the Amazon, where they are an almost entirely human-caused phenomenon. Farmers use slash-and-burn tactics to clear forest areas for crops. Illegal loggers and miners set fires to cover their tracks. In several instances, they have ignited blazes to drive indigenous people off their land.

The fires have been linked to the effects of record heat, drought, and deforestation. And as Vox’s Umair Irfan has reported, these same three issues have led to unprecedented fires across Russia, Alaska, Greenland, California, and elsewhere. These fires “are an unmistakable sign of how humans are radically reshaping the planet,” Irfan writes.

In Brazil, many blame one human in particular for the scope and scale of the Amazon disaster: Bolsonaro. The president has worked to roll back federal rainforest protections in pursuit of a pro-business agenda, and has been openly dismissive of the rights of the peoples who live inside the forest. He has also rejected the work of government experts and scientists who study the Amazon, and has shown a marked lack of curiosity or concern about the fires, as Vox’s Umair Irfan has reported:

The source of the current wildfires in Brazil is not yet known, and the government in Brazil is not all that inclined to find out. INPE’s director, Ricardo Galvão, was ousted from his job earlier this month after his agency reported an 88 percent increase in the deforestation rate in the Amazon.

One suspected cause of the fires is deforestation of the Amazon (which has been encouraged by Bolsonaro) caused by farmers and the natural resource industry, as Vox’s Zack Beauchamp reports:

Bolsonaro, who took office in January and has been referred to as “Captain Chainsaw,” gutted funding for agencies protecting the massive rainforest, essentially giving wink-and-nudge approval for illegal loggers to do their thing. Fire is used as a tool for clearing Amazon land for ranching, and the more trees are cut down, the more vulnerable the rainforest is to wildfires. There have been almost twice as many fires detected in 2019 so far as there were in the entirety of 2018.

Like the government’s Amazon research, federal efforts to protect the forest in general have waned under Bolsonaro. The New York Times found that “enforcement measures to protect against deforestation by Brazil’s main environmental agency fell by 20 percent during the first six months of this year, compared with the same period in 2018.”

All combined, the policies pursued — and the lack of action taken — by the Bolsonaro administration marks a sharp turnaround from the policies of the previous, left-wing Brazilian government, which scaled back Amazon deforestation by 80 percent.

Of concern to Macron — whose government released a statement that said “The president can only conclude President Bolsonaro lied to him at the Osaka summit,” when the two men discussed protecting the Amazon — and to other world leaders concerned about climate change, is the fact that policies that harm the Amazon impact the global climate because of the vast forest’s ability to absorb greenhouse gases. Beauchamp writes:

It’s hard to overstate how threatening this policy is to the climate. The Amazon is the world’s largest rainforest: its trees scrub the Earth of a significant amount of CO2 and have captured a huge amount of carbon and methane within their branches and roots. If you lose the trees, a lot of greenhouse gases get released, and it becomes harder to capture emissions from other sources. Continued fires and clear-cutting in the Amazon could cripple the fight against climate change.

Because of the central role the Amazon plays in keeping life on Earth as we know it going, Macron called on his his fellow leaders to make the fires a top priority at in Biarritz, France’s G7 summit, a gathering of world leaders from Canada, France, Germany, Italy, Japan, the United Kingdom, and the United States.

Our house is burning. Literally. The Amazon rain forest – the lungs which produces 20% of our planet’s oxygen – is on fire. It is an international crisis. Members of the G7 Summit, let’s discuss this emergency first order in two days! #ActForTheAmazon pic.twitter.com/dogOJj9big

Macron also said he would oppose an EU trade deal with a South American bloc that includes Brazil while the crisis continues.

“First we need to help Brazil and other countries put out these fires,” Macron said Saturday.

Bolsonaro responded to the French president’s concerns by tweeting, “I regret that Macron seeks to make personal political gains in an internal matter for Brazil and other Amazonian countries.”

Like many right-wing leaders, Bolsonaro has long been a climate change skeptic

Bolsonaro has been dubbed the “Trump of the Tropics,” a far-right firebrand who shares the American president’s hostility to democracy and penchant for saying extremely offensive things about women and minorities. The similarities clearly extend to climate policy — Trump famously labeled climate change a Chinese hoax, pulled out of the Paris agreement on climate change, and recently presented a “carbon regulation” plan that could actually increase emissions.

The American and Brazilian leaders are particularly aggressive on the issue, but they’re hardly alone among Western right-wingers. A February report from the German Adelphi Institute, an environmental think tank, found that 18 out of the 21 largest European far-right parties are either generally indifferent to climate action or outright oppose it.

… By contrast, the centrist and left parties in these countries were, prior to the populist wave of the past few years, doing a markedly better job on addressing climate change — not perfect or sufficient, mind you, but comparatively much better than what the far-right parties want.

Trump and Bolsonaro have also been aligned in their inconsistent public statements about the fires. The Brazilian president first said the government lacked the resources to fight the flames; now he has mobilized 44,000 troops to do just that.

And on Friday, President Trump tweeted that the US would help Brazil to fight the fires, but on the eve of the military operations, Brazilian Defense Minister Fernando Azevedo said the two governments had not been in contact about the matter at all, according to the Associated Press.

Just spoke with President @JairBolsonaro of Brazil. Our future Trade prospects are very exciting and our relationship is strong, perhaps stronger than ever before. I told him if the United States can help with the Amazon Rainforest fires, we stand ready to assist!

While he initially seemed ambivalent about the fires, Bolsonaro has now pivoted to making them a priority.

Azevedo said the country’s military response “shows the concern of Bolsonaro’s government about this issue,” and in a televised address on Friday night, Bolsonaro said the military operation was part of a “zero tolerance” approach to harms against the Brazilian environment.

“I have a profound love and respect for the Amazon,” he said. “Protecting the rainforest is our duty.”

Bolsonaro’s change of heart was too slow to convince his critics, however. Even as he spoke those words, protesters were out on the streets within Brazil to denounce Bolsonaro for his role in the disaster.

And distaste for how the Brazilian government handled the fires has spread beyond the streets of Brazil and the halls of government in Europe — in London, Paris, Mexico City, Buenos Aires, and elsewhere, people marched carrying banners that read: “Fora Bolsonaro!” — “Bolsonaro, out!”