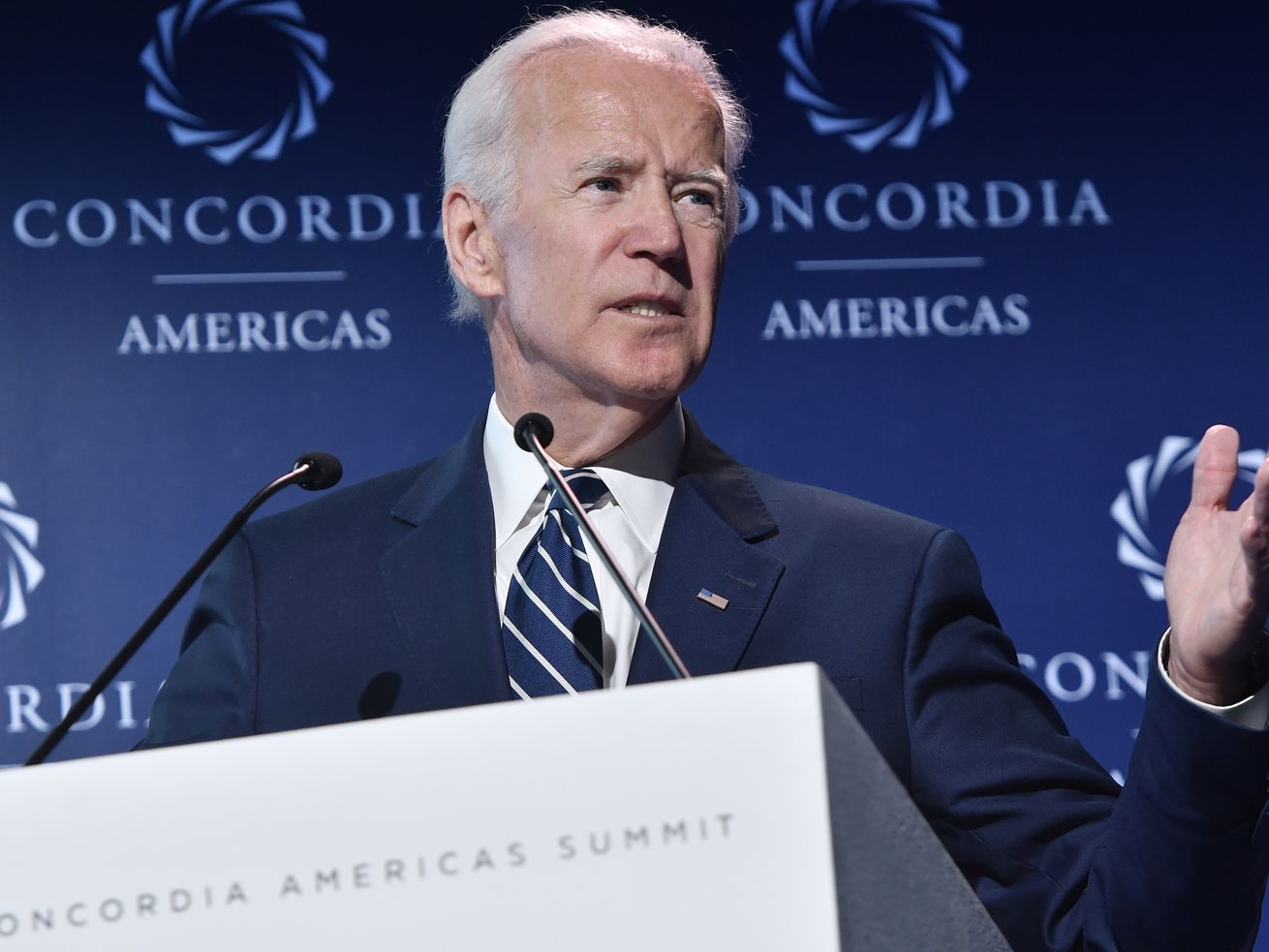 It’s obviously way too early for anyone to have a realistic sense of who is going to prevail in Democrats’ large field of 2020 presidential candidates, but it’s never too early to start breathless speculation about at least parts of it.

The betting website PredictIt offers a perfect opportunity to take stock of where the conventional wisdom currently lies, and where it may be wrong. The site runs an ongoing market about the 2020 race where you can buy “stock” in any candidate, and each share you own of the candidate will pay out a value of $1 if they win the nomination. That means you can interpret the current market price, in cents, of a single share as offering implicit odds on the probability of that contender winning.

As of Thursday afternoon, for example, a share of Kirsten Gillibrand costs 11 cents, implying an 11 percent chance that she will be the nominee.

What the bettors say — and what we think is correct — is that at the moment, there is no overwhelming frontrunner, just a broad field of plausible contenders with a real chance of winning. Given that reality, we’re not going to try to guess the final outcome (at least not yet), but instead give Vox staffers a chance to take regular peeks at the current odds and offer some thoughts about who may be overrated or underrated at current prices.

It feels petty to dump on a guy who’s currently at 3 percent, but honestly, 3 percent badly overrates Andrew Cuomo’s odds. As the governor of New York, he naturally attracts media attention, and the fact that his brother is a CNN host doesn’t hurt in that regard either.

Yet even though all polls indicate Cuomo will prevail fairly easily against Cynthia Nixon, who is challenging him in the primary, the fact that we’re even talking about a primary challenge by Cynthia Nixon shows Cuomo’s profound problems as a potential nominee.

Years ago, when Cuomo first became governor, he made a bet that the biggest risk to his presidential aspirations was that as governor of a large blue state, he would find himself pushed to tack left on policy and render himself “unelectable” in a national race. That got him sucked into all kinds of antics designed to keep Republicans in control of the New York state Senate that completely soured his reputation with progressives over a period of years during which the overall center of gravity in the Democratic Party has moved considerably to the left. Basically, he zigged when in retrospect he should have zagged.

He’s running for reelection with the backing of a strong party machine and almost all of the state’s labor unions, and he will almost certainly win especially given black voters’ historic distaste for white insurgent reformers like Nixon. But none of these strengths will apply in a presidential primary. Against professional politicians, some of whom are black themselves, and without a machine to back him, there’s just no way Cuomo can prevail. The right price for him is zero.

Speaking of which, if you want to take a flyer on a white male governor with presidential ambitions, I’d consider investing in Washington’s Jay Inslee. He’s obviously not likely to win the nomination, and right now he isn’t on the board at all. But I don’t think it’s too hard to tell a story in which in a field crowded with senators making broadly similar pitches about health care and fighting Donald Trump, a blue-state governor manages to catch fire by talking about actual policy accomplishments in his home state and a message focused on climate change. Is Inslee going to win? Probably not. But is he worth taking a gamble on if you can get him for cheap? Absolutely. —Matthew Yglesias

Former Vice President Joe Biden is near the top of the board at 15 cents. It’s time to sell.

Biden is back in the news this week since the passing of his friend John McCain. He’ll serve as one of McCain’s pallbearers on Saturday. Biden’s friendship with McCain is more than a bromance; it’s a symbol of America’s aspirational politics — one that values bipartisanship and civility.

This is Biden’s appeal. He’s an old-school, glad-handing politician — a man who loves to stump and to mix it up with voters. He’s a throwback who seems like he would make a great candidate.

The reality, though, is that not only is that not the politics of the moment, but Biden has never been very good at it anyway. His first two presidential campaigns, in 1988 and 2008, went down in flames. He bowed in 1988 after he was accused of plagiarizing a speech and a law school paper. In 2008, he never performed above single digits nationally during the Democratic primary. He wasn’t able to raise much money. Above all, despite his folksy image and reputation for retail politics, he came in fifth in the Iowa caucuses. If there’s a state for a Democrat who does well with white working-class voters, Iowa would probably be it.

Certainly, Biden’s name recognition and reputation are much higher after eight years serving as Obama’s affable vice president. The press loves him.

But besides the press, Biden doesn’t have much of a constituency in the Democratic Party. He’s not part of the emerging Bernie Sanders/Elizabeth Warren wing. His policy ideas are liberal, but they aren’t the woke politics around identity. He’s a neoliberal throwback, not the future of the Democratic Party. At 15 cents, it’s time to sell.

If you’re looking to take a gamble on a former senator who ran for the vice presidency, you might as well buy Tim Kaine at 2 cents, a relative bargain compared to Biden. He’s also a nice-guy candidate, affable and consensus-building. Ideologically, he’s a similarly situated Democrat as Biden — a liberal as it used to be defined, so relatively moderate today.

He’s got the upside of recent campaign experience, running with Hillary Clinton and seeing the pitfalls of her run up close. He could carry Virginia in the primary and in the general (a potentially appealing case to strategic primary voters). And he’s been in Clintonworld for many years and has connections to that donor network. Is he the most likely to win the primary? Probably not. But he’s a good buy at 2 cents. —Laura McGann

At the very top of the PredictIt betting markets is Kamala Harris, whom you can bet on for 22 cents. It would be foolhardy to rule out Harris entirely, but top of the pack? No way:

Harris polls poorly at this point. In fairness to her, polls two years out are basically meaningless. Rudy Giuliani was not the Republican nominee in 2008, nor was Al Gore the Democratic nominee in 2004. But the polls serve as at least a small data point against the idea of her as a frontrunner.

The core of the case that she’ll be the nominee, as FiveThirtyEight’s Perry Bacon explains, is the theory “among political insiders” that “Harris could win the Democratic nomination with a coalition of well-educated whites and blacks, the way Obama did in 2008.” This, I think, is a misreading of what Obama pulled off in 2008.

For one thing, Obama completely dominated both the ideologically left segment of the primary electorate and the black vote. There was no credible candidate plainly to his left; John Edwards tried to outflank him on economic issues but had voted for the Iraq War, and Dennis Kucinich was generally treated as a UFO-believing punchline. (And Kucinich clearly saw Obama as the furthest-left mainstream candidate, as he threw his Iowa supporters toward him at the last minute.)

Harris, by contrast, will almost certainly not be the most left-wing candidate running, and will face a challenge winning over Black Lives Matter activists, #AbolishICE proponents, and other voters critical of mass incarceration and police brutality. Yes, she wants to reform cash bail and has tried to improve her anti-prison bona fides in the Senate. But she started her career as a prosecutor; has a long record of defending the death penalty against legal challenges (while claiming to be personally opposed it it); resisted strong reforms to the state’s “three strikes” law; and in 2015, as California attorney general, tried to block two trans prisoners from getting gender-affirming surgeries. In a crowded field, stuff like that could be a real problem.

Nor is she likely to be the only black candidate in the field. Her Senate colleague Cory Booker is almost certainly going to jump in, and it’s possible that former Massachusetts Gov. Deval Patrick or former Attorney General Eric Holder will as well. That not only prevents her from, as Obama did, putting together a winning coalition with an overwhelming majority of black voters plus elite whites, but it also, along with her weakness on criminal justice issues, means she’ll be forced to actively court black voters in ways that promise to turn off racist white voters in both the primary and the general.

So who should be first in a crowded field in these betting markets? My pick would be Bernie Sanders:

Do I think it’s probable (as in, more than 50 percent odds) that Sanders wins the nomination? Absolutely not. He’d be the oldest president ever elected by a wide margin, he’ll probably lose the black and Latino vote and continue to struggle in the South, and this time, around he won’t be the only alternative to the frontrunner that most people consider (sorry, Martin O’Malley).

But consider what he has going for him:

Of course, it’s entirely possible that Sanders declines to run, deferring to Warren or staying out of the race entirely. But if he does run, I put his odds much higher than 15 percent. —Dylan Matthews