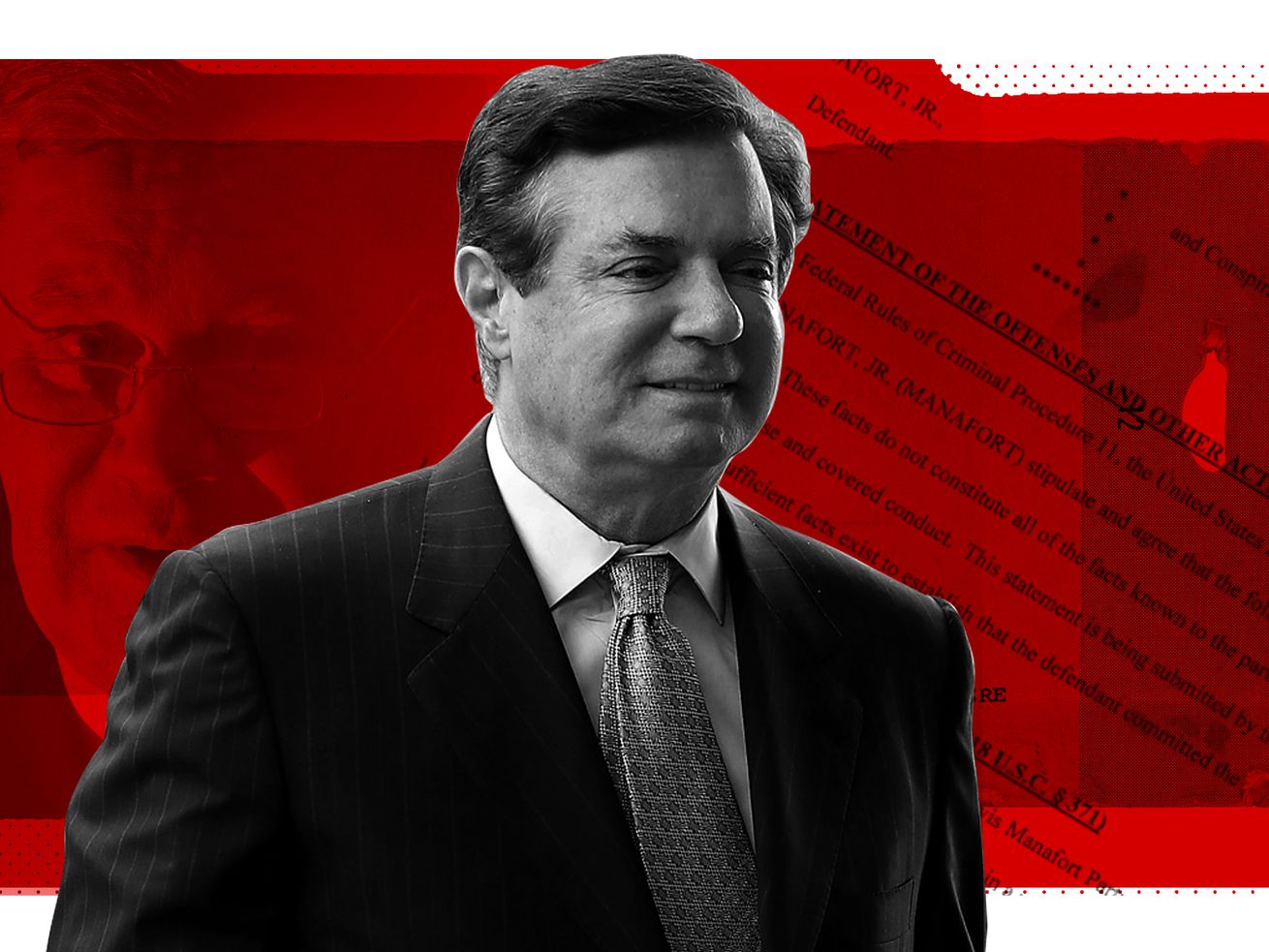 Over the course of several months, he portrayed his political opponent, Yulia Tymoshenko, as corrupt and threatened to jail her. He warned that the election might be rigged and called on supporters to march in protest if he lost. He yelled about the corruption of the political elite and attacked his Western allies, calling instead for closer ties with Russia, with whom he had cultivated deep — and hidden — business ties.

Any of this sound familiar?

During his 2016 presidential campaign, Donald Trump had the same strategic adviser as Yanukovych did six years earlier: Paul Manafort.

Coincidentally or not, Manafort proceeded to implement a nearly identical political playbook to launch Trump into the most powerful office in the world.

On September 14, Manafort pleaded guilty to two counts of conspiracy — counts that include money laundering, failing to register as a foreign agent, and witness tampering — and agreed to cooperate with special counsel Robert Mueller’s investigation into whether the Trump campaign colluded with Russia during the presidential election.

The plea agreement came after Manafort was found guilty on charges of tax fraud, bank fraud, and hiding foreign bank accounts in a separate trial last month. The charges Manafort pleaded guilty to concern his influence-peddling on behalf of Yanukovych and his pro-Russian political party, the Party of Regions, in Washington and elsewhere — all of which occurred years before Manafort joined the Trump campaign.

The day the plea agreement was announced, White House press secretary Sarah Sanders issued a statement emphasizing that fact — that Manafort’s crimes happened long before he ever worked for the campaign — saying that the plea deal “had absolutely nothing to do with the president or his victorious 2016 presidential campaign. It is totally unrelated.”

But while she’s right that the crimes Manafort pleaded guilty to predate his work with the Trump campaign, his decision to plead guilty brings us closer to resolving questions surrounding possible cooperation between the Trump campaign and Russian interests.

For Mueller, Manafort is a way to gain detailed insight into the campaign’s most controversial inner machinations, including the June 2016 Trump Tower meeting billed in advance by Russians as a way to collect damaging information on Hillary Clinton, and the decision to weaken the Republican Party’s support for Ukraine (which Russia had invaded) in its official platform.

Manafort may also provide new details about who knew what and when about WikiLeaks’ dissemination of Hillary Clinton’s stolen emails at a key moment during the election.

As a former spy, I know that Manafort was a vulnerable target

Manafort’s guilty plea makes it clear that his actions on behalf of Ukraine’s pro-Russian leader were in lockstep with the larger interests of Russian President Vladimir Putin, who sought to undermine democracy not only in Eastern Europe but in America as well.

So why did this convergence of interests occur? My experience as an intelligence officer tells me that Manafort’s unmitigated greed and his business practices — including money laundering and his frequent use of offshore accounts — highlight vulnerabilities that Russian intelligence officers could have exploited to their advantage, including while he was working for Trump.

At the CIA, where I worked in the Directorate of Operations, we assessed a potential asset’s vulnerabilities using the acronym MICE: money, ideology, coercion, and ego. Any good intelligence officer finds a way to use those vulnerabilities to leverage the asset to work on her or his behalf.

Manafort, it was clear, had multiple vulnerabilities. He liked money, and he hid a lot of it. Prosecutors at his first trial highlighted Manafort’s extravagant lifestyle, trotting out exhibits showing he spent a million dollars on clothing at a single store, bought a $21,000 watch, spent a million dollars on Oriental rugs, used millions to buy and renovate real estate, and shelled out $15,000 on an ostrich leather jacket.

Yanukovych, the Ukrainian president, lived an opulent lifestyle as well — particularly for a lifelong public servant.

After he was forced out of office in February 2014, Ukrainians stormed his residence and discovered luxury cars, an 18-hole golf course, a presidential sauna, and a private exotic zoo, which included several ostriches (no word yet on how Yanukovych, or his ostriches, felt about Manafort’s jacket). Elsewhere, investigators for the new government found a ledger outlining $12 million in unofficial payments to Manafort.

So we know that Manafort had extensive ties to important people, some of whom were in their own compromising situations. Any intelligence officer would recognize the opportunity. Manafort was, quite simply, a ripe target to be exploited.

But what does lobbying for Ukraine have to do with Russia?

Yanukovych and his political party, who were both Manafort’s clients, had a political agenda aligned with Russia and influenced by a flow of Russian money.

The most glaring example of this occurred in November 2013, when Yanukovych decided not to sign an agreement with the European Union — despite popular support in Ukraine for it — and to push, instead, for closer ties with Russia.

The move set off a series of protests in Ukraine that nearly led to a civil war and ended with Yanukovych’s ouster in February 2014. He fled the country and remains in exile, notably, in Russia.

What’s notable as well is that Manafort and his partners pushed that same pro-Russia political agenda with US policymakers and the American press.

Manafort tried to clean up Yanukovych’s image in the West, convincing policymakers that his jailing of Tymoshenko was not politically motivated, for example, and that Yanukovych was the best leader to forge Ukraine’s relationship with Europe — exactly as Putin wanted.

Manafort also did other things to promote Putin’s agenda. According to the Associated Press, Manafort signed a contract in 2006 with Russian oligarch and Putin friend Oleg Deripaska. Deripaska agreed to pay Manafort $10 million a year to develop and execute an influence plan that Manafort promised would “greatly benefit the Putin Government.”

The Wall Street Journal has reported that Manafort carried out similar pro-Russian influence operations in Georgia and Montenegro, two other countries Putin has been keen to keep on a tight leash due to their geographic proximity and historic ties to Russia.

This type of lobbying shares many similarities with espionage.

Both focus on gathering information, and influencing and manipulating people to do one’s bidding. The only real difference is deniability: Intelligence agencies like to hide the fact that they are behind the influence.

Lobbyists often don’t — but Manafort did.

In fact, Manafort’s correspondence, included as evidence in court filings, is littered with spy lingo depicting his efforts at deniability. In a June 2012 email to his associates Rick Gates and Konstantin Kilimnik outlining plans to put together a high-level group of former European leaders to push Ukraine’s agenda, for example, Manafort notes “some informal and covert interaction is possible.”

He also pushed news stories denigrating Yanukovych’s political opponent in the American press. Those, too, needed to be “push[ed]” “[w]ith no fingerprints,” according to court filings.

As the charging documents state, Manafort hid that he and the government of Ukraine were behind efforts “to influence both American leaders and the American public.” He viewed “secrecy for himself and for the actions of his lobbyists as integral to the effectiveness of the lobbying offensive.”

Manafort and his partners even used other companies and individuals as cutouts, allowing them to influence policymakers “without any visible relationship with the Government of Ukraine,” according to the statement of offenses.

This all brings us to the question of collusion

Why did Manafort, a man who loved money, agree to work for Trump for free?

Was someone else paying him secretly? Were the loans he received from Deripaska or others connected to pro-Russian interests, whether business executives or organizations, really meant to be paid back? Or was Manafort in debt to these people, and thus vulnerable to coercion?

Manafort’s lawyers have denied he colluded with the Russian government. But his relationship with Deripaska, the Russian oligarch, included financial debt — which Deripaska wound up pursuing in the courts, and Manafort has denied.

This raises the question of what exactly Manafort owed to people close to Putin.

Of particular note is an email exchange — published by the Washington Post and the Atlantic — in which Manafort offered to brief Deripaska on developments in the Trump campaign.

This was an intriguing offer considering Deripaska’s relationship with Putin, and the fact that Manafort had received millions of dollars from Deripaska to do something. (They have each said the funds were for consulting or business deals that fell apart.)

Mueller may soon learn the answers to some of these questions, and perhaps the American public will learn the answer to the most important question of all: When Manafort worked on the Trump campaign, whose interests was he serving?

Alex Finley (@alexzfinley) is the pen name of a former journalist and an officer of the CIA from 2003 to 2009. She is the author of Victor in the Rubble, a satire about the CIA and the war on terror.