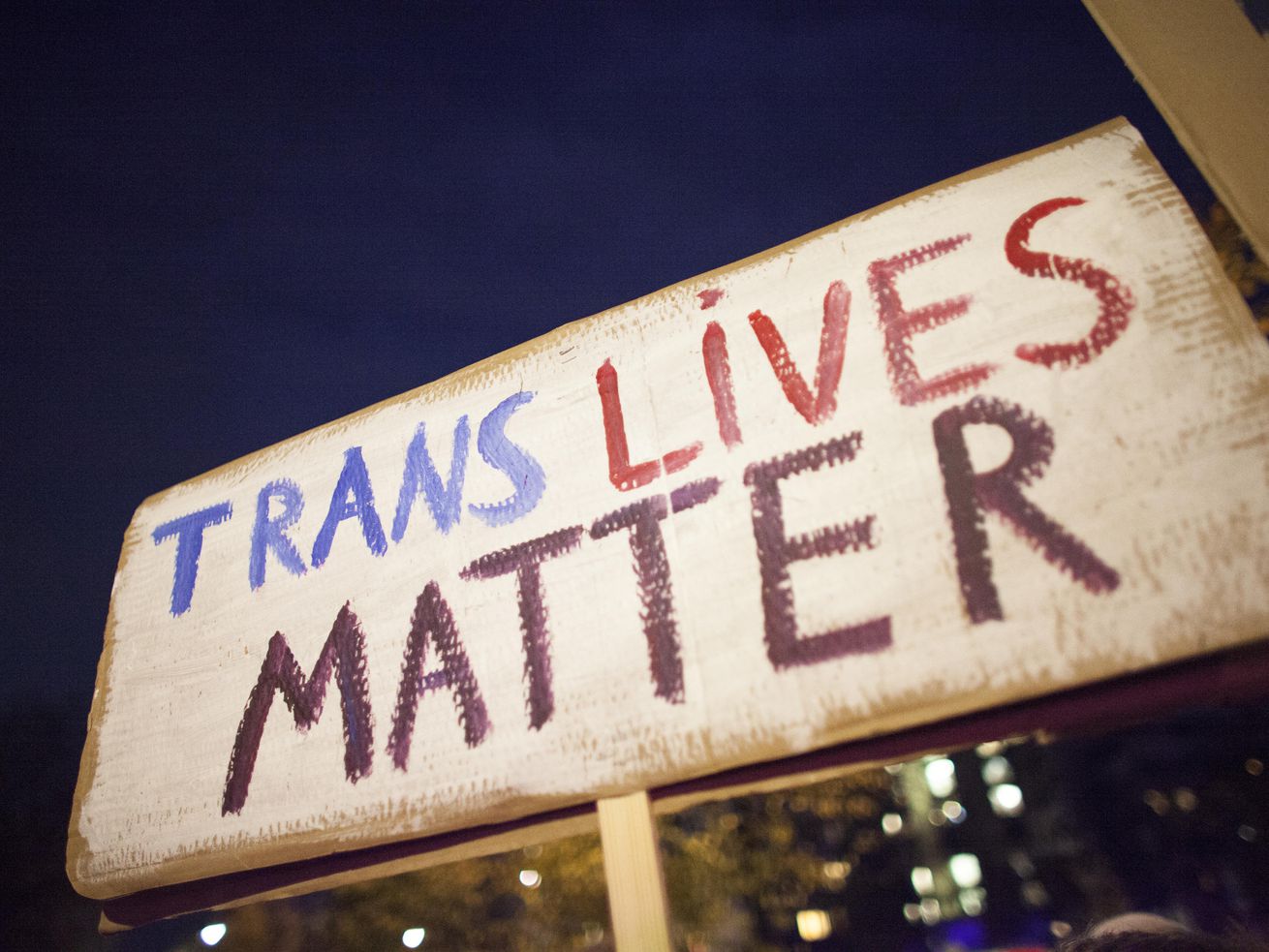 Trans lives matter banner during a “We won’t be erased” LGBTQ demonstration near the US Embassy in Warsaw on October 30, 2018. | Maciej Luczniewski/NurPhoto via Getty Images

A video posted to Iyanna Dior’s Facebook page said she’s okay, with some swelling and bruises.

A black trans woman from Minneapolis, Minnesota, was brutally attacked by a group of men Monday, according to a video circulating on social media this week.

The video, which we’ve chosen not to post or link to due to its graphic nature, shows a group of 20 to 30 cisgender men hitting a woman, Iyanna Dior, outside a convenience store while calling her a homophobic slur. Dior was eventually able to escape behind the counter of the store and through the back of the building, according to the video, while bystanders (and possibly employees) stood between her and her attackers.

Details about the attack on Dior aren’t entirely clear, and we will update this story as we learn more, but according to tweet with the video that went viral, the altercation reportedly occurred shortly after a “fender bender.”

Dior later posted a video on her Facebook page saying that she was okay and that she suffered some swelling and bruising, as well as minor injuries to her forehead and teeth. She did not respond to a Facebook message seeking more information.

#IyannaDior is a black trans woman who was brutally attacked as a crowd of cis black folks looked on (shoutout to the ONE good sis who tried to intervene). Folks stood witness to this brutality on another black life. You can see it in the video. #blacklivesmatter #girlslikeus pic.twitter.com/s1K6shRuwx

But this is why we must always clarify that all #BlackLivesMatter every time we invoke this chant.

Actress Amiyah Scott similarly expressed disgust over the violence against Dior, noting the timing of the altercation when violence against black people is so front of mind right now. “BLACK TRANS LIVES MATTER TOO,” she tweeted.

The attack on Dior is just the latest incident in an epidemic of violence against black trans people, especially women. Several of the recent protests against police violence have mentioned the death of Tony McDade, a trans man from Tallahassee, Florida, who was killed by police during a standoff after he was suspected of stabbing several people in an apartment complex parking lot.

But the beating of Dior and the police killing of McDade are reminders of the disproportionate violence faced by black trans people.

Black trans people are at increased risk of violence

At least 26 transgender or gender-nonconforming people were violently killed last year. Of those, 91 percent were black trans women. According to the 2015 US Transgender Survey, 46 percent of all trans people reported experiencing verbal harassment because of their gender identity in the last year, with nearly 1 in 10 physically attacked over their gender identity. Fifty-three percent of black trans respondents were sexually assaulted in their lifetime and 13 percent were sexually assaulted in the last year.

The reason trans women of color are particularly susceptible to violence involves a complex intersection of their trans identity and race, as well as poverty, overpolicing, and housing.

The Dior incident reveals this complex system of violence. She was beaten while her attackers and onlookers called her a homophobic slur, both misgendering her and attacking her perceived queer identity.

A similar incident happened last April in Dallas, when 22-year-old Muhlaysia Booker was beaten by a man after being in a minor traffic accident earlier in the day. Like the Dior attack, a crowd of onlookers encouraged Booker’s beating. Police arrested 29-year-old Edward Thomas in connection with her assault.

In court in October, Thomas’s attorney refused to use she/her pronouns for Booker because he felt it might unfairly prejudice the jury against his client. “Read the sex! What does the sex say?” another of Thomas’s defense attorneys said when the judge described Booker as a woman.

The attack on Booker, her murder, and the subsequent court battle shows how difficult it can be for black trans women to stay safe and find justice in the legal system when they are attacked on the street. And that injustice is rooted in the systemic discrimination experienced by black trans people.

A lack of employment and housing protections throughout most of the country contributes to financial insecurity for these women. As a result, transgender workers are more likely to be unemployed versus their cisgender counterparts, and 34 percent of black trans women face housing insecurity compared to just 9 percent of nonblack trans people. With astronomically high costs for transition-related surgeries, many trans women end up turning to sex work in order to survive.

Sex workers, particularly trans sex workers of color, face a disproportionately high risk of violence, up to and including murder. The close association between black trans women and sex workers often makes interactions with the police difficult or outright dangerous.

Last year, an NYPD officer testified at a deposition that he would drive down the street looking for women with Adam’s apples to stop on suspicion of solicitation. Under the law in New York and many other states, discovery of a condom in a purse is sufficient evidence to arrest a trans woman on prostitution charges. A black trans activist in Arizona was infamously arrested in this fashion in 2014, while another black trans woman traveling through Iowa was arrested after hotel staff called the police suspecting that she was a sex worker.

It’s no wonder, then, that 21 percent of black trans women will face incarceration at least once in their lifetimes, according to the National LGBTQ Task Force, significantly higher than the general population.

As the nation struggles over violence against black bodies, attention must be paid to the everyday violence faced by black trans people, especially trans women, too.